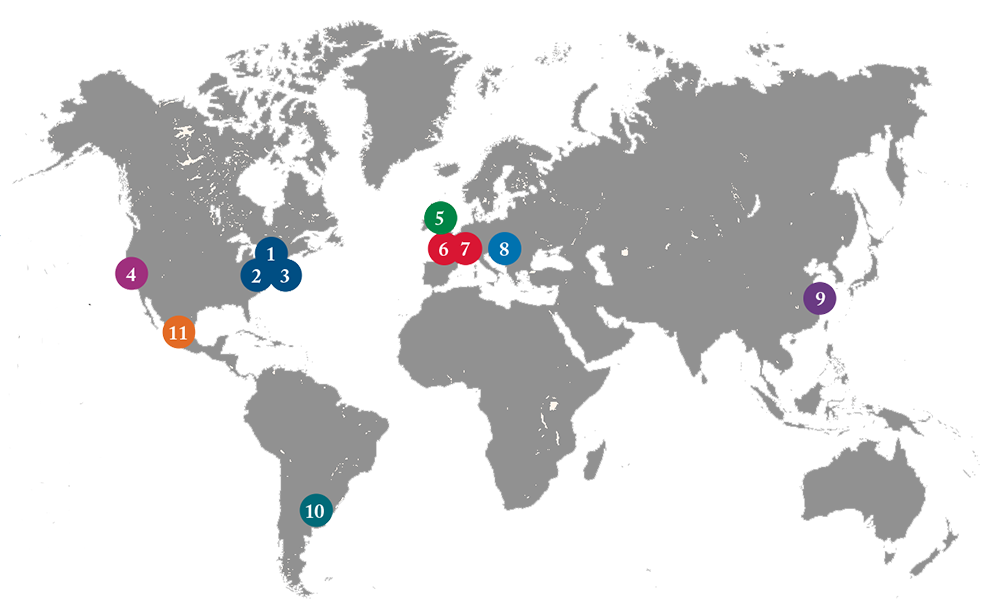 George Washington held his farewell dinner at this favorite pre-Revolutionary meeting place of the Sons of Liberty. In 1785 proprietor Sam Fraunces leased the tavern to the Continental Congress; the War Department and Treasury also subsequently rented office space here.

Thanks to a World War II–era recording ban that forced musicians to make a living solely from live performances, guitarist Charlie Christian jammed at this Harlem jazz club with a house band that included Lester Young, Thelonious Monk, Don Byas, and Coleman Hawkins.

More than a decade after River Phoenix’s fatal overdose there, the Sunset Boulevard nightclub opened by 21 Jump Street costars Johnny Depp and Sal Jenco remained a louche hotspot thanks to its clandestine poker games, which brought in celebrities, including Leonardo DiCaprio, Ben Affleck, Matt Damon, and the Olsen twins.

This Whig hangout attracted the likes of Jonathan Swift, Lady Mary Wortley Montagu, and Edmund Burke, who discussed the news of the day over coffee and harder libations. “Here, waiter, more wine, let me sit while I’m able,” Oliver Goldsmith wrote of the establishment in 1774, “till all my companions sink under the table.”

In its original incarnation, this café and liquoriste was favored by Paul Verlaine, Guillaume Apollinaire, and Arthur Rimbaud. In later years André Breton, Jean-Paul Sartre, and Simone de Beauvoir loitered and smoked on the terrace.

Ernest Hemingway, Jack Dempsey, Gertrude Stein, and F. Scott Fitzgerald were habitués of this Lost Generation boîte. George Gershwin was said to have composed An American in Paris at the piano upstairs.

Since opening in 1876, the café has counted among its regulars Theodor Herzl, Leon Trotsky, and Sigmund Freud. “It is not like other cafés,” wrote the critic Alfred Polgar, “it is a way of viewing the world, one whose innermost substance it is not to view the world.”

Across the street from the Recoleta Cemetery, this café offered comfort to writers such as Jorge Luis Borges, Adolfo Bioy Casares, and Julio Cortázar. It also served as a meeting place for pilots and Formula One drivers.

Frida Kahlo and Diego Rivera obtained permits for their students to paint murals in this pulqueria, a hangout for local residents such as David Alfaro Siqueiros, Luis Buñuel, Octavio Paz, and Dolores del Río.