They had almost completed their harvest, and they were preparing for an early departure when the whites appeared in their midst at Gnadenhütten.

The first innocent life had been taken, and the hands extended in friendship to the Brethren were already stained with the blood of one of their number. About a mile from the village, the whites found a half-breed boy, the son of the missionary Schebosch and his Indian wife, and giving him a peaceful greeting, they approached and killed him with their tomahawks, he crying out between their blows that his father was a white man and imploring them to spare him. To the main body of the Christians whom they found in the cornfields, they now declared that they had come to remove them to Fort Pitt, where they would be safe from dangers that menaced them as the friends of the Americans, at the same time taking care to secure their rifles, lest in their extremity these helpless people should be tempted to make some effort at self-defense. The Brethren thanked them for their kindness and mingled freely with their captors, who walked about among them, “engaging them in friendly conversation,” asking them concerning their civil and religious customs, and praising them for their practical Christianity. They persuaded them to send messengers with a detachment ordered to Salem and urge the Brethren in the fields there to repair to Gnadenhütten. In the meantime, the whites remaining suddenly fell upon their bewildered prisoners and bound them; and the expedition, acting upon preconcerted measures, reentered Gnadenhütten with the Salem converts disarmed and manacled.

Although the purpose of the campaign had been perfectly understood from the beginning, the officers were now loath to execute it upon their own responsibility; and it is historian Joseph Doddridge’s belief, from his personal knowledge of Colonel Williamson’s character, that if he had been an officer with due authority, and not merely the leader of a band of marauders, he would not have suffered any of his prisoners to be slain. But he was powerless and could only refer their fate to a vote of his men. When, therefore, it was demanded, Should the Christian Indians be put to death, or should they be sent to Fort Pitt? only eighteen voted to spare their lives. It still remained a question whether they should be burned alive or tomahawked and scalped; and the majority having voted for the latter form of murder, one of the assassins was deputed to inform the Indians, that, inasmuch as they were Christians, they would be given one night to prepare for death in a Christian manner. 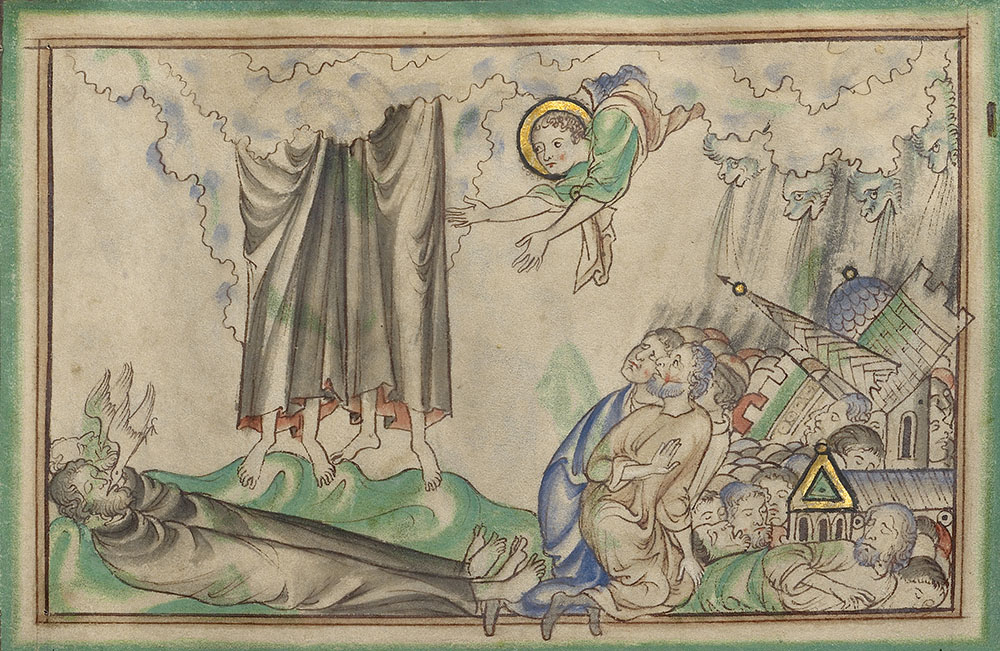 The Removal of the Two Witnesses and the Destruction of the City, miniature from the Dyson Perrins Apocalypse, c. 1260. © The J. Paul Getty Museum, Los Angeles; digital image courtesy of the Getty’s Open Content Program.

It is related that the merciful eighteen reiterated their protests to the last against the atrocity, but neither their protests nor the appeals of the Indians availed. One of the women who had been educated at Bethlehem, and who spoke good English, fell upon her knees at Williamson’s feet and besought his protection; but the greater number of the victims seem to have submitted silently, with something of the old stoical fortitude of the savage, and something of the martyr’s serene resignation. They embraced with tears and kisses and asked forgiveness one of another, and thus meekly prepared themselves for their doom. They were Christians whose lives had witnessed to the sincerity of their conversion; and, now brought face-to-face with death, their faith remained unshaken. Among them were five of the national assistants, one of whom was well educated in English, and all of whom were men of exemplary thought and deed. These led the rest in the fervent prayers and hymns with which they wore away the night.

At dawn the assassins grew impatient of the delay they had granted and sent to the Brethren, demanding whether they were not yet ready to die; and being answered that they had commended their souls to God and received the assurance of his peace, the whites parted them, the men from the women and children, and placed them in two houses, to which, from some impulse of grotesque and ferocious drollery, they gave the name of the Slaughterhouses.

Few even among those who had voted for the murder of the Brethren took part in the actual butchery. The great body of the whites turned aside from the ineffable atrocity, while those who with their own hands did the murder now entered the cabins.

The house in which the men were confined had been that of a cooper, and his mallet, abandoned in the removal of the preceding autumn, lay upon the floor. One of the whites picked it up, and saying, “How exactly this will answer for the business!” made his way among the kneeling figures toward Brother Abraham, a convert, who, from being somewhat lukewarm in the faith, had in this extremity become the most fervent in exhortation. Then while the clear and awful music of the victims’ prayers and songs arose, this nameless murderer lifted his weapon and struck Abraham down with a single blow. Thirteen others fell by his hand before he passed the mallet to a fellow assassin, with the words “My arm fails me. Go on in the same way. I think I have done pretty well.” In the house where the women and children awaited their doom, the massacre began with Judith, a very old and pious widow; and in a little space, the voices of singing and of supplication failing one by one, the silence that fell upon the place attested the accomplishment of a crime which, for all its circumstances and conditions, must be deemed one of the blackest in history. The murderers scalped their victims as they fell, and when the work was done, they gathered their trophies together and rejoined their comrades. But before nightfall they came again to the Slaughterhouses for some reason; and as they entered that of the men, one of the Brethren who had been stunned and scalped, but not killed, lifted himself upon his hands and turned his bloodstained visage toward them with a ghastly stare. They fell upon the horrible apparition, and it sank beneath their tomahawks to rise no more; and then, with that wild craving for excitement which seems the first effect of crime in the guilty, they set fire to the cabins and, withdrawing to a little distance, spent the night in drunken revelry by the light of the burning shambles.

The sole witnesses of their riot were two Indian boys, who had almost miraculously escaped the general butchery, and who afterward met in the woods outside of the village. One of them had been knocked down and scalped with the rest and, reviving like the Brother who was killed on the return of the murderers to the Slaughterhouses, had taken warning by his fate and, feigning death, had fled as soon as they were gone. The other, having concealed himself beneath the house of the women and children, remained there, the blood dripping down upon him through the floor, until nightfall. A companion who had taken refuge with him, and attempted to escape with him through the cabin window, stuck fast and was burned to death.

From “Gnadenhütten.” In March 1782 a group of militiamen from Penn­sylvania and Virginia, angry about recent kid­nappings and killings of local whites, came upon a group of peaceful Delaware Indians. Though the tribespeople were guiltless and had been converted to Christianity by Moravian missionaries, the militia­men rounded them up and committed the slaughter Howells details in this account, first published in The Atlantic Monthly in 1869. Howells was born in 1837 in an Ohio town only fifty miles from the site of the massacre.

The Day Will Come

Bartolomeo Vanzetti goes on the record.More