At three o’clock Max and Bunny paid their check and ascended to the street. Bunny wanted to go to the breakfast dance at the Dahomey Casino, but Max was in no mood for it.

As the cab whirled up Seventh Avenue, he settled back and thought of the girl from Atlanta who had rejected him that night. He couldn’t get her out of his mind and didn’t want to. At his rooming house, he paid the driver, unlocked the door, ascended to his room, and undressed mechanically. His mind was a kaleidoscope: Atlanta, sea-green eyes, slender figure, titian hair, frigid manner. “I never dance with niggers.” Then he fell asleep about five o’clock and promptly dreamed of her. Dreamed of dancing with her, dining with her, motoring with her, sitting beside her on a golden throne while millions of manacled white slaves prostrated themselves before him. Then there was a nightmare of grim gray men with shotguns, baying hounds, a heap of gasoline-soaked faggots, and a screeching, fanatical mob.

He awoke covered with perspiration. His telephone was ringing, and the late morning sunshine was streaming into his room. He leaped from bed and lifted the receiver.

“Say,” shouted Bunny, “did you see this morning’s Times?”

Appearances are a glimpse of the obscure.

“Well, do you remember Dr. Junius Crookman, that colored fellow that went to Germany to study about three years ago? He’s just come back, and the Times claims he’s announced a sure way to turn darkies white. Thought you might be interested after the way you fell for that ofay broad last night. They say Crookman’s going to open a sanitarium in Harlem right away. There’s your chance, Big Boy, and it’s your only chance.” Bunny chuckled.

But he was impressed and a little excited. Suppose there was something to it? He dressed hurriedly, after a cold shower, and went out to the newsstand. He bought a Times and scanned its columns. Yes, there it was:

Max went into Jimmy Johnson’s restaurant and greedily read the account while awaiting his breakfast. Yes, it must be true. To think of old Crookman being able to do that! Only a few years ago he’d been just a hungry medical student around Harlem. Max put down the paper and stared vacantly out of the window. Gee, Crookman would be a millionaire in no time. He’d even be a multimillionaire. It looked as though science was to succeed where the Civil War had failed. But how could it be possible? He looked at his hands and felt at the back of his head where the straightening lotion had failed to conquer some of the knots. He toyed with his ham and eggs as he envisioned the possibilities of the discovery.

Then a sudden resolution seized him. He looked at the newspaper account again. Yes, Crookman was staying at the Phyllis Wheatley Hotel. Why not go and see what there was to this? Why not be the first Negro to try it out? Sure, it was taking a chance, but think of getting white in three days! No more jim crow. No more insults. As a white man he could go anywhere, be anything he wanted to be, do most anything he wanted to do, be a free man at last…and probably be able to meet the girl from Atlanta. What a vision!

He rose hurriedly, paid for his breakfast, rushed out of the door, almost ran into an aged white man carrying a sign advertising a Negro fraternity dance, and strode, almost ran, to the Phyllis Wheatley Hotel.

He tore up the steps two at a time and into the sitting room. It was crowded with white reporters from the daily newspapers and black reporters from the Negro weeklies. In their midst he recognized Dr. Junius Crookman, tall, wiry, ebony black, with a studious and polished manner. Flanking him on either side was Henry (“Hank”) Johnson, the “numbers” banker, and Charlie (“Chuck”) Foster, the realtor, looking very grave, important, and possessive in the midst of all the hullabaloo.

“Yes,” Dr. Crookman was telling the reporters while they eagerly took down his statements, “during my first year at college I noticed a black girl on the street one day who had several irregular white patches on her face and hands. That intrigued me. I began to study up on skin diseases and found out that the girl was evidently suffering from a nervous disease known as vitiligo. It is a very rare disease. Both Negroes and Caucasians occasionally have it, but it is naturally more conspicuous on blacks than whites. It absolutely removes skin pigment, and sometimes it turns a Negro completely white but only after a period of thirty or forty years. It occurred to me that if one could discover some means of artificially inducing and stimulating this nervous disease at will, one might possibly solve the American race problem. My sociology teacher had once said that there were but three ways for the Negro to solve his problem in America,” he gestured with his long slender fingers, “‘To either get out, get white, or get along.’ Since he wouldn’t and couldn’t get out and was getting along only differently, it seemed to me that the only thing for him was to get white.” For a moment his teeth gleamed beneath his smartly waxed mustache, then he sobered and went on:

“I began to give a great deal of study to the problem during my spare time. Unfortunately there was very little information on the subject in this country. I decided to go to Germany, but I didn’t have the money. Just when I despaired of getting the funds to carry out my experiments and studies abroad, Mr. Johnson and Mr. Foster,” he indicated the two men with a graceful wave of his hand, “came to my rescue. I naturally attribute a great deal of my success to them.”

“But how is it done?” asked a reporter.

“Well,” smiled Crookman, “I naturally cannot divulge the secret any more than to say that it is accomplished by electrical nutrition and glandular control. Certain gland secretions are greatly stimulated while others are considerably diminished. It is a powerful and dangerous treatment but harmless when properly done.”

“How about the hair and features?” asked a Negro reporter.

“They are also changed in the process,” answered the biologist. “In three days the Negro becomes to all appearances a Caucasian.” 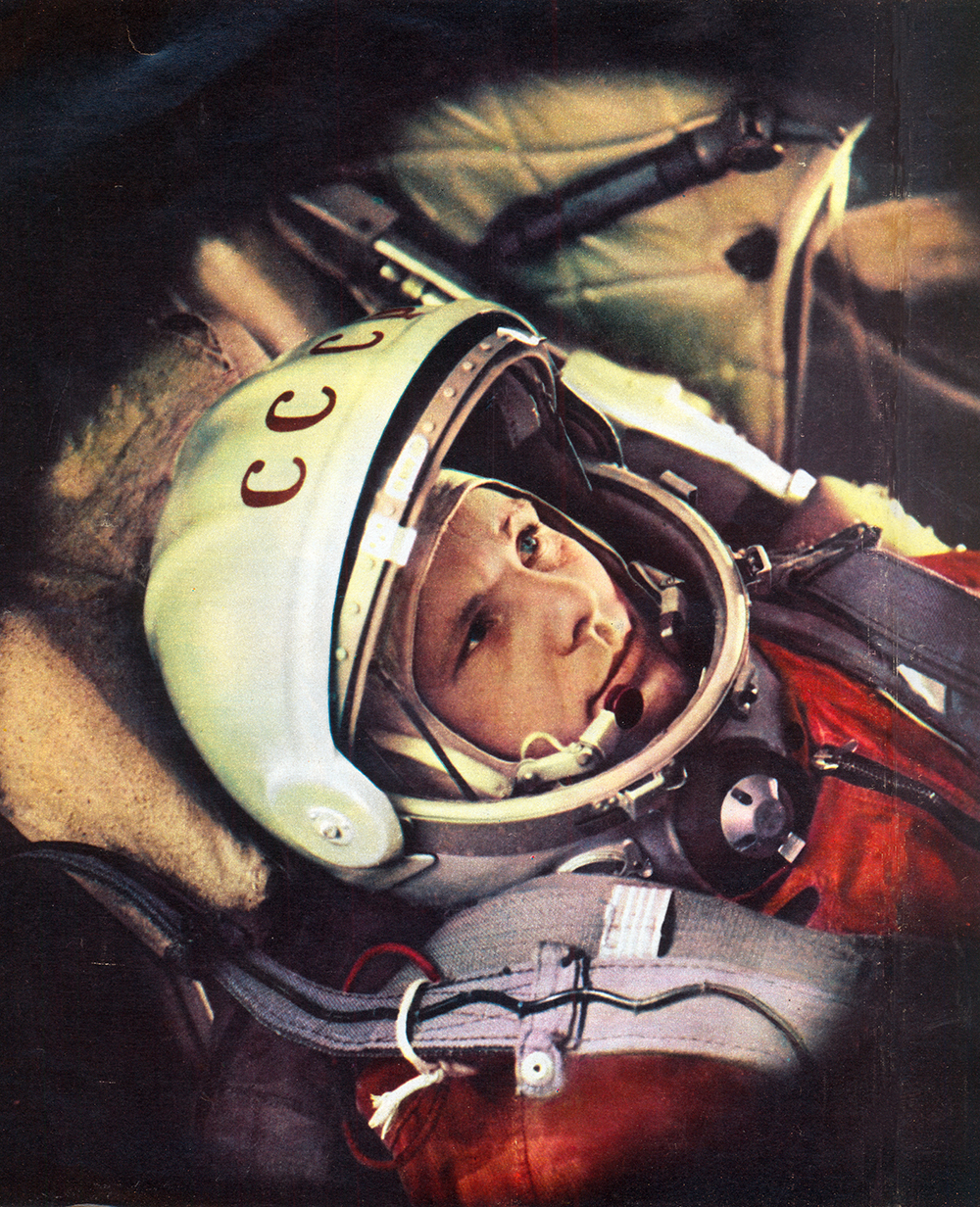 “But is the transformation transferred to the offspring?” persisted the Negro newspaperman.

“As yet,” replied Crookman, “I have discovered no way to accomplish anything so revolutionary, but I am able to transform a black infant to a white one in twenty-four hours.”

“Have you tried it on any Negroes yet?” queried a skeptical white journalist.

“Why, of course I have,” said the doctor, slightly nettled. “I would not have made my announcement if I had not done so. Come here, Sandol,” he called, turning to a pale white youth standing on the outskirts of the crowd, who was the most Nordic-looking person in the room. “This man is a Senegalese, a former aviator in the French Army. He is living proof that what I claim is true.”

Dr. Crookman then displayed a photo­graph of a very black man, somewhat resembling Sandol but with bushy Negro hair, flat nose, and full lips. “This,” he announced proudly, “is Sandol as he looked before taking my treatment. What I have done to him I can do to any Negro. He is in good physical and mental condition as you all can see.”

The assemblage was properly awed. After taking a few more notes and a number of photographs of Dr. Crookman, his associates, and  Sandol, the newspapermen retired. Only the dapper Max Disher remained.

“Why, certainly I remember you, Max,” replied the biologist, rising cordially. “Been a long time since we’ve seen each other, but you’re looking as sharp as ever. How’s things?”

“Oh, pretty good. Say, Doc, how’s chances to get you to try that thing on me? You must be looking for volunteers.”

“Yes, I am, but not just yet. I’ve got to get my equipment set up first. I think now I’ll be ready for business in a couple of weeks.”

Charlie Foster, small, slender, grave, amber-colored, and laconic, finally spoke up: “Seems all right, Junius, but there’ll be hell to pay when you whiten up a lot o’ these darkies and them mulatto babies start appearing here and there. Watcha gonna do then?”

“There’ll be no difficulties whatever,” assured Crookman rather impatiently.

From Black No More. While working as a journalist in New York City in the 1920s, Schuyler was a fierce critic of the Harlem Renaissance, arguing that black artists should be seen as a diverse group, not operating with a single sensibility. He based this 1931 novel on the “many chemists, professional and amateur,” he had encountered who sought “the means of making the downtrodden Aframerican resemble as closely as possible his white fellow citizen.” A socialist in his youth, Schuyler became a conservative later in life. He died in 1977 in Pittsburgh.