Mary looked at the key quite a long time. She turned it over and over, and thought about it. She was not a child who had been trained to ask permission or consult her elders about things. All she thought about the key was that if it was the key to the closed garden, and she could find out where the door was, she could perhaps open it and see what was inside the walls, and what had happened to the old rose trees. It was because it had been shut up so long that she wanted to see it. It seemed as if it must be different from other places and that something strange must have happened to it during ten years. Besides that, if she liked it she could go into it every day and shut the door behind her, and she could make up some play of her own and play it quite alone, because nobody would ever know where she was, but would think the door was still locked and the key buried in the earth. The thought of that pleased her very much.

Living as it were, all by herself in a house with a hundred mysteriously closed rooms and having nothing whatever to do to amuse herself, had set her inactive brain to working and was actually awakening her imagination. There is no doubt that the fresh, strong, pure air from the moor had a great deal to do with it. Just as it had given her an appetite, and fighting with the wind had stirred her blood, so the same things had stirred her mind. In India she had always been too hot and languid and weak to care much about anything, but in this place she was beginning to care and to want to do new things. Already she felt less “contrary,” though she did not know why.

The eternal mystery of the world is its comprehensibility.

She put the key in her pocket and walked up and down her walk. No one but herself ever seemed to come there, so she could walk slowly and look at the wall, or rather at the ivy growing on it. The ivy was the baffling thing. Howsoever carefully she looked, she could see nothing but thickly growing, glossy, dark green leaves. She was very much disappointed. Something of her contrariness came back to her as she paced the walk and looked over it at the treetops inside. It seemed so silly, she said to herself, to be near it and not be able to get in. She took the key in her pocket when she went back to the house, and she made up her mind that she would always carry it with her when she went out, so that if she ever should find the hidden door, she would be ready.

Mary Lennox had heard a great deal about magic in her ayah’s stories, and she always said that what happened almost at that moment was magic.

One of the nice little gusts of wind rushed down the walk, and it was a stronger one than the rest. It was strong enough to wave the branches of the trees, and it was more than strong enough to sway the trailing sprays of untrimmed ivy hanging from the wall. Mary had stepped close to a robin on the ivy, and suddenly the gust of wind swung aside some loose ivy trails, and more suddenly still, she jumped toward it and caught it in her hand. This she did because she had seen something under it—a round knob which had been covered by the leaves hanging over it. It was the knob of a door. 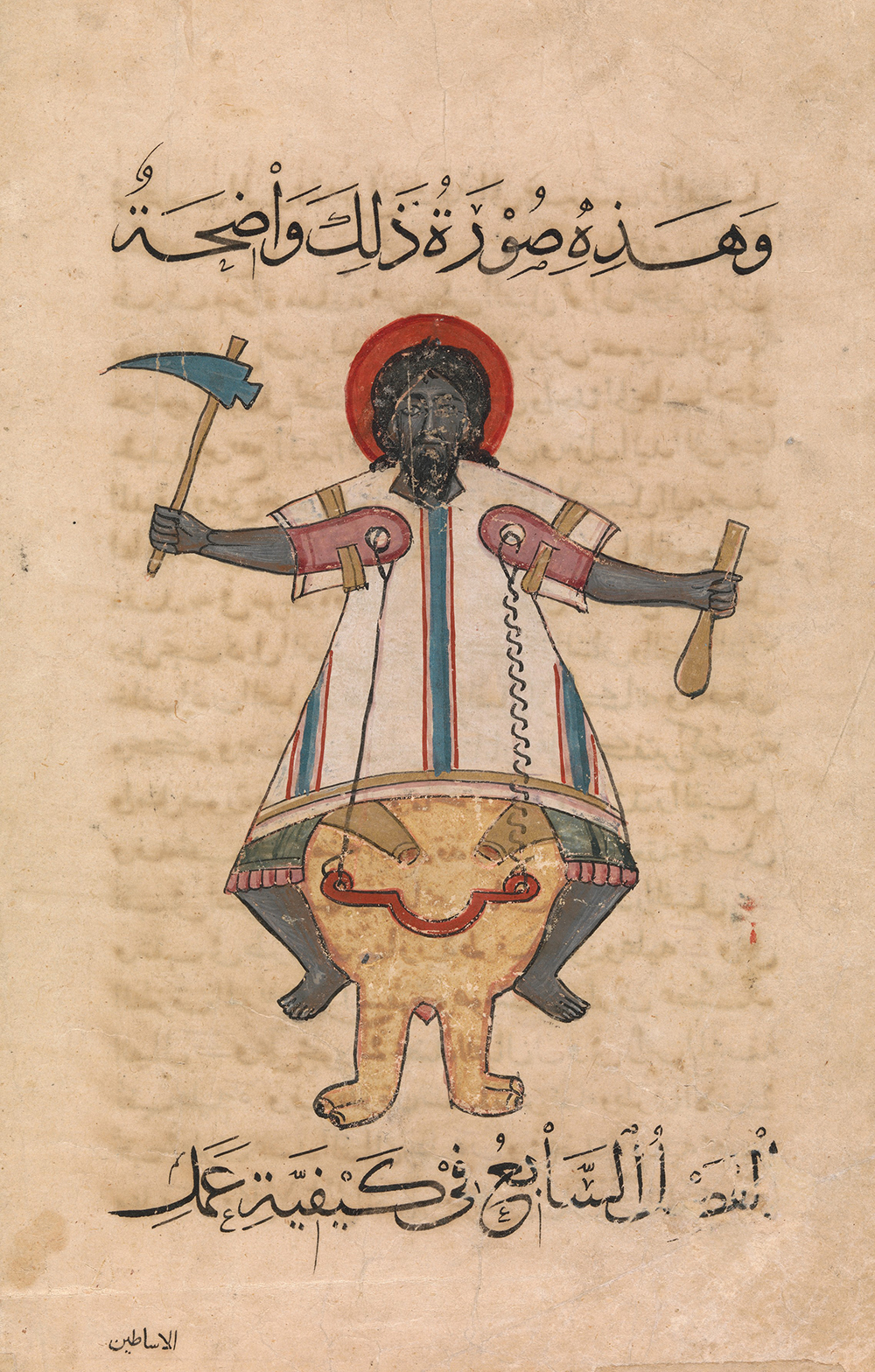 Design for a Clock in the Form of an Elephant with an Indian Driver, from a 1315 edition of The Book of Knowledge of Ingenious Mechanical Devices, by al-Jazari. The Metropolitan Museum of Art, Rogers Fund, 1955.

She put her hands under the leaves and began to pull and push them aside. Thick as the ivy hung, it nearly all was a loose and swinging curtain, though some had crept over wood and iron. Mary’s heart began to thump and her hands to shake a little in her delight and excitement. The robin kept singing and twittering away and tilting his head on one side, as if he were as excited as she was. What was this under her hands which was square and made of iron and which her fingers found a hole in?

It was the lock of the door which had been closed ten years, and she put her hand in her pocket, drew out the key, and found it fitted the keyhole. She put the key in and turned it. It took two hands to do it, but it did turn.

Then she slipped through it, and shut it behind her, and stood with her back against it, looking about her and breathing quite fast with excitement and wonder and delight.

She was standing inside the secret garden.

From The Secret Garden. Born in Manchester, England, and raised in Knoxville, Tennessee, Burnett is best known for her children’s novels, including Little Lord Fauntleroy, A Little Princess, and this story of an orphan sent to live with her uncle, which was made into a movie starring Margaret O’Brien in 1949. “As long as one has a garden, one has a future,” Burnett wrote near the end of her life, “and as long as one has a future, one is alive.” She died in 1924 at the age of seventy-four.