Let us suppose that the great empire of China, with all its myriads of inhabitants, was suddenly swallowed up by an earthquake, and let us consider how a man of humanity in Europe, who had no sort of connection with that part of the world, would be affected upon receiving intelligence of this dreadful calamity.

He would, I imagine, first of all, express very strongly his sorrow for the misfortune of that unhappy people. He would make many melancholy reflections upon the precariousness of human life and the vanity of all the labors of man, which could thus be annihilated in a moment. He would too, perhaps, if he was a man of speculation, enter into many reasonings concerning the effects which this disaster might produce upon the commerce of Europe, and the trade and business of the world in general. And when all this fine philosophy was over, when all these humane sentiments had been once fairly expressed, he would pursue his business or his pleasure, take his repose or his diversion, with the same ease and tranquility as if no such accident had happened. The most frivolous disaster which could befall himself would occasion a more real disturbance. If he was to lose his little finger tomorrow, he would not sleep tonight. But, provided he never saw them, he will snore with the most profound security over the ruin of a hundred million of his brethren, and the destruction of that immense multitude seems plainly an object less interesting to him than this paltry misfortune of his own. To prevent, therefore, this paltry misfortune to himself would a man of humanity be willing to sacrifice the lives of a hundred million of his brethren, provided he had never seen them? Human nature startles with horror at the thought, and the world, in its greatest depravity and corruption, never produced such a villain as could be capable of entertaining it. But what makes this difference? When our passive feelings are almost always so sordid and so selfish, how comes it that our active principles should often be so generous and so noble?

Once you hear the details of a victory it is hard to distinguish it from a defeat.

When we are always so much more deeply affected by whatever concerns ourselves than by whatever concerns other men, what is it which prompts the generous, upon all occasions, and the mean upon many, to sacrifice their own interests to the greater interests of others? It is not the soft power of humanity, it is not that feeble spark of benevolence which nature has lighted up in the human heart that is thus capable of counteracting the strongest impulses of self-love. It is a stronger power, a more forcible motive, which exerts itself upon such occasions. It is reason, principle, conscience, the inhabitant of the breast, the man within, the great judge and arbiter of our conduct. It is he who, whenever we are about to act so as to affect the happiness of others, calls to us with a voice capable of astonishing the most presumptuous of our passions that we are but one of the multitude, in no respect better than any other in it; and that when we prefer ourselves so shamefully and so blindly to others, we become the proper objects of resentment, abhorrence, and execration. It is from him only that we learn the real littleness of ourselves, and of whatever relates to ourselves, and the natural misrepresentations of self-love can be corrected only by the eye of this impartial spectator. It is he who shows us the propriety of generosity and the deformity of injustice; the propriety of resigning the greatest interests of our own for the yet greater interests of others, and the deformity of doing the smallest injury to another in order to obtain the greatest benefit to ourselves. It is not the love of our neighbor, it is not the love of mankind, which upon many occasions prompts us to the practice of those divine virtues. It is a stronger love, a more powerful affection which generally takes place upon such occasions, the love of what is honorable and noble, of the grandeur and dignity and superiority of our own characters.

From The Theory of Moral Senti­ments. Smith was born in a Scottish fishing village in 1723; according to his first biographer, at the age of four he was abducted by a band of gypsies. In the first sentence of Moral Sentiments, Smith’s first book, he puts forth his theory of sympathy: “However selfish man may be supposed, there are evidently some principles in his nature, which interest him in the fortune of others.” 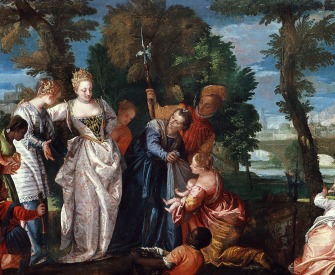 Seeking and finding in the Bible. More