The first execution by electricity has been a horror. Physicians who might make a jest out of the dissecting room, officials who have seen many a man’s neck wrenched by the rope, surgeons who have lived in hospitals and knelt beside the dead and dying on bloody fields, held their breaths with a gasp, and those unaccustomed to such sights turned away in dread.

The doctors say the victim did not suffer. Only his Maker knows if that be true. To the eye, it looked as though he were in a convulsive agony.

The current had been passing through his body for fifteen seconds when the electrode at the head was removed. Suddenly the breast heaved. There was a straining at the straps which bound him, a purplish foam covered the lips and was spattered over the leather headband.

The man was alive. Warden, physicians, eve­rybody, lost their wits. There was a startled cry for the current to be turned on again. Signals, only half-understood, were given to those in the next room at the switchboard. When they knew what had happened, few were prompt to act, and the switch handle could be heard as it was pulled back and forth, breaking the deadly current into jets.

The rigor of death came on the instant. An odor of burning flesh and singed hair filled the room. For a moment a blue flame played about the base of the victim’s spine. One of the witnesses nearly fell to the floor. Another lost control of his stomach. Cold perspiration beaded every face. This time the electricity flowed four minutes.

Kemmler was dead. Part of his brain had been baked hard. Some of the blood in his head had been turned into charcoal. The flesh at the small of his back was black with fire.

From an article published in the New York World. Electrocution as a humane method of execution was first proposed in 1885 by Dr. Alfred Southwick, a dentist, its first application attached to William Kemmler, a vegetable peddler convicted of murdering his lover with an axe. 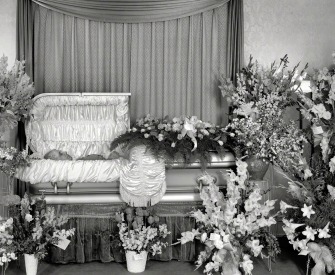 Jessica Mitford’s An American Way of Death took down an industry few people knew about, but that... More

The persecution of English Jews.More