The Italian poet and writer Alessandro Manzoni is best known for his novel The Betrothed, considered a masterpiece of Italian literature. After it was first published in 1827, Manzoni continued to revise the novel after its release. The final and definitive version was published in 1842. Revered by his compatriots, he was made an Italian senator in 1860, and the country mourned his passing with a state funeral. 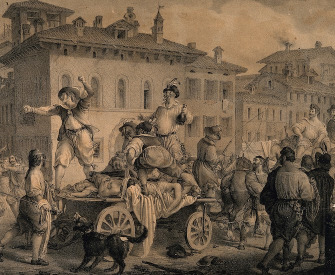