Born in New York City, Virginia Gildersleeve received a PhD in English and comparative literature from Columbia University in 1908, and became dean of Barnard College in 1911, a position she held for thirty-six years. She was active in international affairs for much of her life, cofounding the International Federation of University Women, serving as one of six American delegates at the conference drafting the United Nations charter, and helping create WAVES, the World War II–era women’s branch of the naval reserve. “The ability to think straight, some knowledge of the past, some vision of the future, some skill to do useful service, some urge to fit that service into the well-being of the community,” she wrote at the end of her 1954 memoir, reflecting on the lessons of her career, “these are the most vital things education must try to produce.” 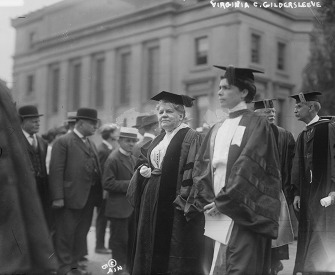 The first commencement speech given by a woman at Smith College. More