The situation being extraordinarily complex, the writer, if he really wants to write, if he wants to hone his craft, must face the splitting of the mind, the supping with the devil, the writing in dribbles from the corner of the mouth, but also the exhilarating challenge of rising to the need. But how? We don’t even speak the same meanings.

If you say “man,” quite innocently, in Afrikaans, you are of necessity referring to a white; the language has other derogatory terms for indicating the Other. Similarly, “peace” in the white mouth demands maintaining a strict order by law, protecting the status quo, everybody “knowing his place.” For the black, this peace spells poverty, oppression, alienation, indignity, humiliation, and being driven to the despair of violence in the bitter quest for the recognition of his essential being. Justice is white. Imagine a black who has raped a white not being sentenced to the rope. Imagine a white condemned to death for raping a black. Imagine what it is like to be, naturally, by birth, an alien in your country, needing a pass to move through it and a permit allowing you to settle there temporarily, on sufferance. Think of how many black males attain adulthood without a sojourn in prison.

Do you believe that beauty is the same, then, for black and white—or politics, or commitment, or literary and intellectual quality? And yet we all speak the same words seen through different prisms of ache. The best black writing comes from the profound shared popular aspiration toward freedom, but this identification does not help with the conundrum of not having an audience, not really—and neither does it of necessity confer quality on the work. As for the whites, despite the fact that some of them, some of us, are passionate observers, and sometime diligent escapees into the exquisitely vibrating space of a literary no man’s land, we are alienated, marginalized, depoliticized, irrelevant. The heart is shrinking.

And yet the task remains the same­­­—to keep the word alive, or uncontaminated, or at least to allow it to have a meaning, to be a conduit of awareness. To remember that writing imposes an obligation of dignity, even if idiotically so, in the Dostoevskian sense. To try not to confuse writing with politics, given the fact that writing is politics. To keep up the noise level, to create confusion at least, to be an undermining campaigner for alternatives, that is for thinking. To fight against the laming of the palate. To keep an uncivil tongue in the head. To write against that fate worse than death, the wooden tongue clacking away in the wooden orifice in order to produce the wooden singsong praises to the big bang-bang and the fluttering flag. Not to knuckle down to oversimplification. To accept the compromise to survive, publishing by hook or by crook or by samizdat, beating the breast and gnashing the teeth, if you are that way inclined.

Propagating violence? Condoning mayhem? Penning prose poems to some homegrown Stalin? No. The craft excludes that. To accept, though with humility and compassion, that we have, that we all have, areas of rottenness within us, that which was stolen and killed by the censor, or weakened by fear. The white writer, moreover, must avoid the twin paternalist pitfalls of either trying to speak in the place of the oppressed blacks, or indulging in special pleading when it comes to their work. He must, at all costs, avoid having himself or his work be tainted by the epithets of martyrdom or courageous actions. Someone once said to me that there are two forms of corruption, the corruption of power and the corruption of suffering. The one needs to be avoided as badly as the other. 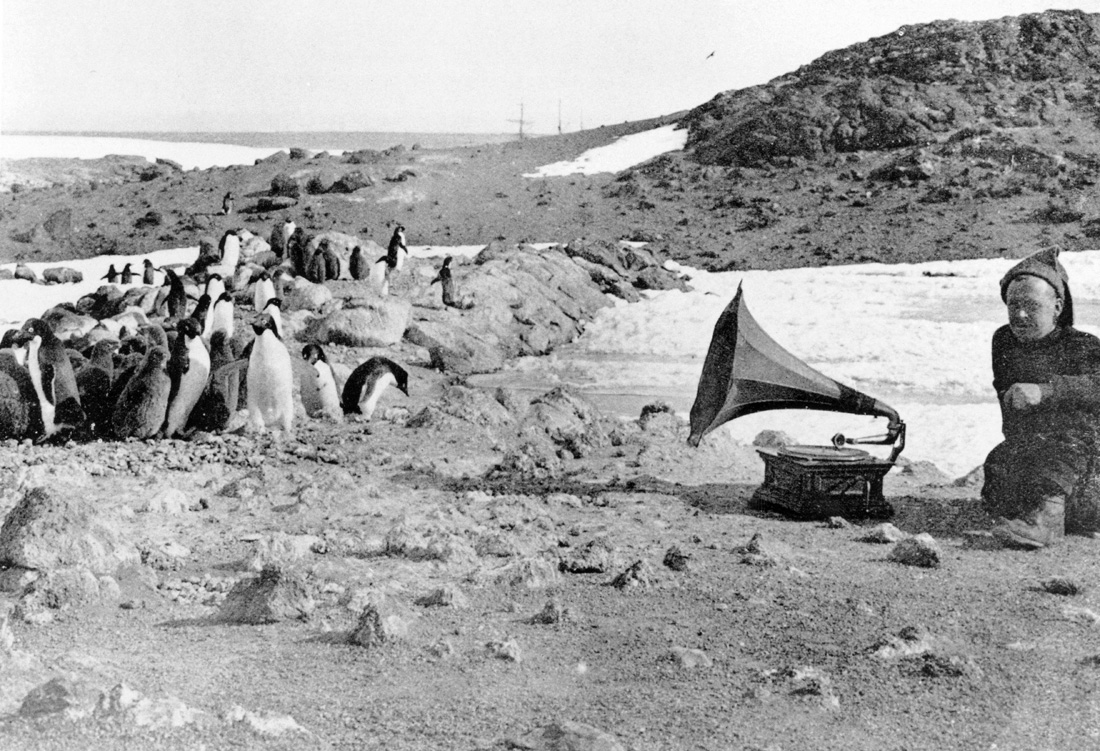 Penguins listening to a gramophone during Ernest Shackleton’s expedition to Anartica, 1907. The Bridgeman Art Library.

I have set these bleak thoughts about totalitarianism, and the role of the writer in a totalitarian situation, in South Africa, partly because it is the totalitarian situation that I know best, to the extent that a white living away from that country, with its hidden majority, can pretend to know it at all; but mainly because South Africa is at one and the same time a unique case and a microcosm of the many problems bedeviling colonial societies, or imperialist outposts, or multicultural nations, or simply developing countries; and also, if I may be for a moment a little imperialist myself, because the solution to the South African problem will be exemplary to the world, and will set Africa on the road to freedom.

From “The South African Wasteland.” Descended from seventeenth-century Dutch settlers, Breytenbach was born in 1939, attended the University of Cape Town, and went to Europe at the age of twenty. He published his first collection of poetry, The Iron Cow Must Sweat, and his first volume of prose, Catastrophes, in 1964. After forming his own anti-apartheid group and returning to his country in 1975, Breytenbach was arrested and jailed as a political prisoner for seven years. He currently teaches creative writing at New York University.