I gazed back down the steep slope that we had just conquered. The mountain, from the plain behind us, did not rise more than seven or eight hundred feet above the floor of the sea. But on the opposite side, it commanded from twice that height a vista of the depths of this sector of the Atlantic. My eyes ranged far across a large area illuminated by the danger beacon of a violent fulguration. In short, the mountain was a semiactive volcano.

At fifty feet or so below the peak, in the midst of a rain of stones and scoriae, a large crater was vomiting forth torrents of lava. This fell back in a cascade of fire into the heart of the liquid mass. Situated as it was, this volcano lit the lower plain of the ocean like an immense torch, even to the uttermost limits of the horizon. I said that the submarine crater threw forth lava but no flames—for the latter require the oxygen of the air to feed upon, and cannot be developed underwater. But streams of lava, having within themselves the principle of their own incandescence, can attain a white heat, fight vigorously against the liquid element, and by contact turn it into vapor.

Rapid streams bearing combustible gases in diffusion, and torrents of lava, slid to the base of the mountain like an eruption of Vesuvius on another Terra del Greco.

There, indeed, right beneath my eyes, lay a town that had been destroyed, completely ruined. Its roofs were open to the sky, its temples fallen, its arches broken, its columns strewn about the ground. Yet one could still recognize in its disrupted outlines the massive character of Tuscan architecture.

What is the city but the people?

Farther off I saw the remains of a gigantic aqueduct—here the high base of an acropolis with the floating outline of a parthenon—yonder the traces of a quay, as if an ancient port had formerly abutted on the border of the ocean, only one day to disappear forever with its merchant vessels and its war galleys. Such was the sight that Captain Nemo had brought before my gaze.

Where was I? Where on the earth of men and gods and fishes was I now? I had to know, whatever the cost. I tried to speak, forgetful of my helmet, but my companion stopped me with a gesture. He picked up from the ground at his feet a piece of chalky stone, walked over to a great rock of black basalt, and traced there the one word: atlantis.

What a light flashed up in my mind!

Atlantis, the ancient Meropis of Theopompus, the Atlantis of Plato, that continent whose existence was denied by Origen, Iamblichus, d’Anville, Malte-Brun, and Humboldt. These scientists all placed the story of its disappearance among the legendary tales of folklore and superstition. And now I had it here, captive before my eyes, bearing upon its every stone the unimpeachable testimony of its dread catastrophe. The region thus engulfed was in the outer ocean, beyond Europe, Asia, and Lybia, beyond the columns of Hercules, where dwelt that powerful people, the Atlantides, against whom the first wars of earliest Greece were waged.

Thus, conducted by the strangest freak of destiny, I was treading with my soles the mountains of this continent. I touched with my hand those ruins a thousand generations old, contemporary with the geological epochs. I was walking on the very spot where the fellows and relatives of the first man had wandered.

While I was endeavoring to imprint on my mind forever every detail of this awesome landscape, Captain Nemo stood motionless, as if petrified during a moment of mute ecstasy. He leaned upon a mossy stone. Was he dreaming of those countless generations long since vanished? Was he seeking of their ghosts the secrets of human fate? Was it here that this strange man came to steep himself in historical recollections? Did he in this forgotten city relive the ancient life, he who wanted no modern one? 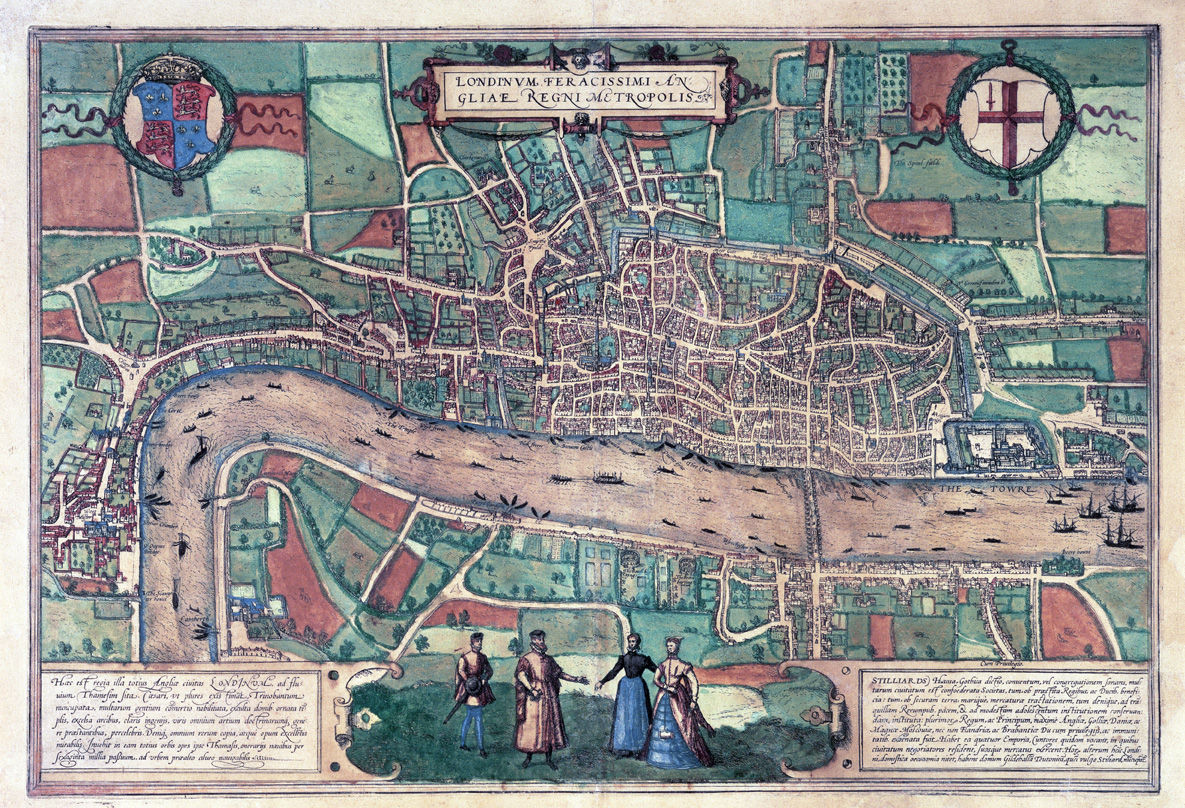 Map of London, from Cities of the World, edited by Georg Braun, 1572.

What should I not have given to penetrate his thoughts, to share their spirit, and to comprehend! We must have stood at least an hour at this spot, studying the vast plain under the brilliance of the lava, which was sometimes wonderfully intense.

Rapid tremblings ran along the mountain, caused by internal bubblings and explosions. Deep noises from the interior, transmitted by the liquid medium, were echoed in majestic grandeur. At this moment the moon appeared through the mass of waters and shed her pallid rays upon the buried continent. It was but a gleam, but how indescribable was its effect! The captain rose, cast one last look across the immense plain spread out beneath us, and then by a sign bade me follow him back to the Nautilus.

From Twenty Thousand Leagues Under the Sea. The father of modern science fiction wrote over sixty novels as part of his Extraordinary Voyages series, among them Around the World in Eighty Days and Journey to the Center of the Earth. The principal sources for Atlantis derive from two Platonic dialogues, but the legend may have been inspired by the volcanic eruption on the Greek island of Thera around 1500 BC.