With the beginning of the prosperity of the City of the Angels came the end of its primeval peace. Spanish viceroys, Mexican alcaldes and governors, United States commanders, naval and military, followed on each other’s heels, with or without frays, ruling California through a succession of tumultuous years. Greedy traders from all parts of the world added their rivalries and interventions to the civil and military disputation. In the general anarchy and confusion, the peaceful and peace-loving Catholic Fathers were robbed of their lands, their converts were scattered, their industries broken up. Nowhere were these uncomfortable years more uncomfortable than in Los Angeles. Revolts, occupations, surrenders, retakings, and resurrenders kept the little town in perpetual ferment. Disorders were the order of the day and of the night, in small matters as well as in great.

Early Californian men seem to have been a variety of centaur. They were seldom off their horses to eat and sleep. They mounted, with jingling silver spur and glittering bridle, for the shortest distances—even to cross a plaza. They paid long visits on horseback, without dismounting. Clattering up to the window or doorsill, halting, throwing one knee over the crupper, the reins lying loose, they sat at ease, far more at ease than in a house. Only at church, where the separation was inevitable, would they be parted from their horses. They turned the near neighborhood of a church on Sunday into a sort of picket ground, or horse-trainers’ yard, full of horse posts and horses, and the scene was far more like a horse fair than like an occasion of holy observance. There seems to have been a curious mixture of reverence and irreverence in their natures. They confessed sins and underwent penances with the simplicity of children, but when in 1821 the Church issued an edict against that “escandalosisima” dance, the waltz, declaring that whoever dared to dance it should be excommunicated, the merry sinners waltzed on only the harder and faster, and laughed in their priests’ faces.

The City of the Angels is a prosperous city now. It has business thoroughfares, blocks of fine stone buildings, hotels, shops, banks, and is growing daily. Its outlying regions are a great circuit of gardens, orchards, vineyards, and cornfields, and its suburbs are fast filling up with houses of a showy though cheap architecture. But it has not yet shaken off its past. A certain indefinable, delicious aroma from the old, ignorant, picturesque times lingers still, not only in byways and corners, but in the very centers of its newest activities. 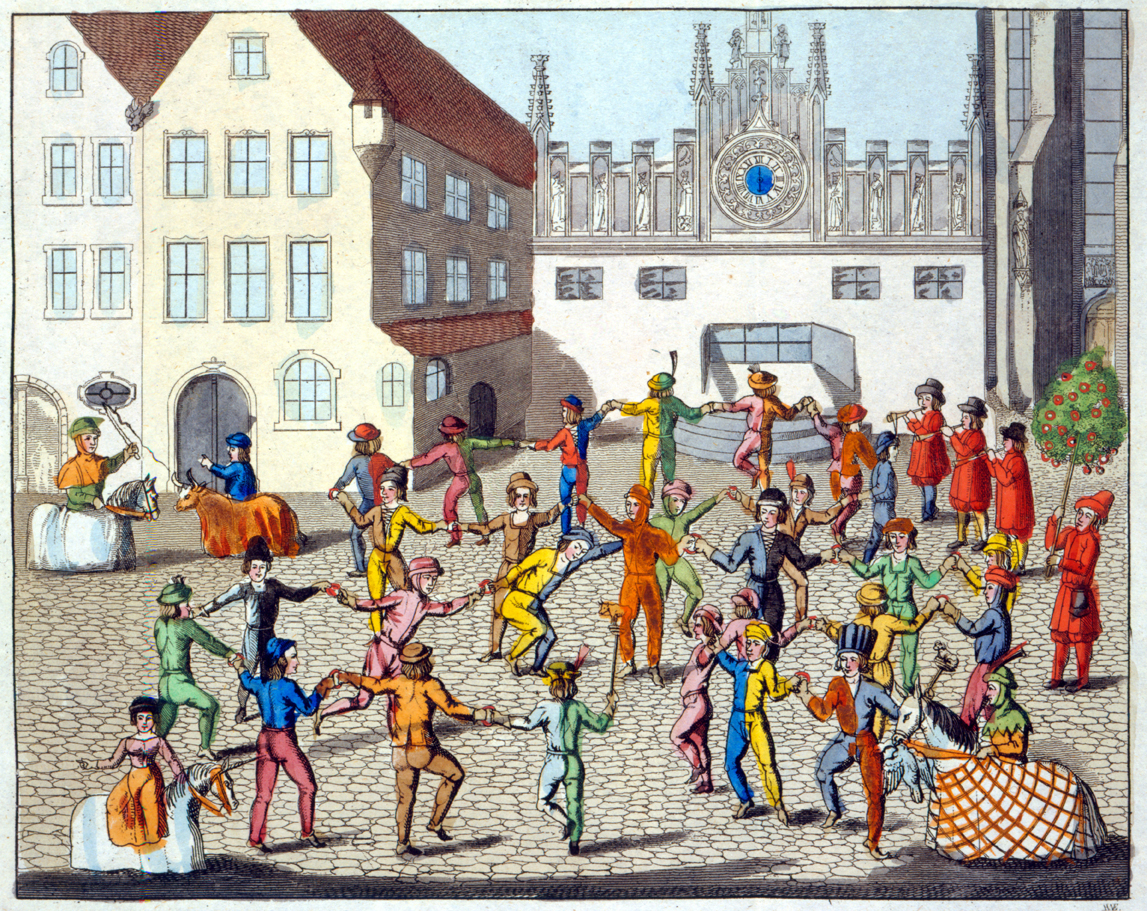 Festivities in the city square, illustration from Old Nuremberg’s Customs and Practices in Games and Songs, 1831. © The Stapleton Collection, The Bridgeman Art Library International.

Mexican women, their heads wrapped in black shawls and their bright eyes peering out between the close-gathered folds, glide about everywhere; the soft Spanish speech is continually heard; long-robed priests hurry to and fro, and at each dawn, ancient, jangling bells from the Church of the Lady of the Angels ring out the night and in the day. Vendors of strange commodities drive in stranger vehicles up and down the streets, antiquated carts piled high with oranges, their golden opulence contrasting weirdly with the shabbiness of their surroundings and the evident poverty of their owner. Close following on the gold of one of these, one has sometimes the luck to see another cart, still more antiquated and rickety, piled high with something—he cannot imagine what—terracotta red in grotesque shapes; it is fuel—the same sort which Villavicencia, Quintero, and the rest probably burned, when they burned any, a hundred years ago. It is the roots and root shoots of manzanita and other shrubs. The colors are superb—terracotta reds shading up to flesh pink and down to dark mahogany—but the forms are grotesque beyond comparison: twists, quirls, contortions—a boxful of them is an uncomfortable presence in one’s room, and putting them on the fire is like cremating the vertebrae and double teeth of colossal monsters of the Pterodactyl period.

The plaza is a dusty and dismal little place, with a parsimonious fountain in the center, surrounded by spokes of thin turf, and walled at its outer circumference by a row of tall Monterey cypresses, shorn and clipped into the shape of huge croquettes or bradawls standing broad-end down. At all hours of the day, idle boys and still idler men are to be seen basking on the fountain’s one rim, or lying, face down, heels in air, in the triangles of shade made by the cypress croquettes. There is in Los Angeles much of this ancient and ingenious style of shearing and compressing foliage into unnatural and distorted shapes. It comes, no doubt, of lingering reverence for the traditions of what was thought beautiful in Spain centuries ago, and it gives to the town a certain quaint and foreign look in admirable keeping with its irregular levels, zigzag, toppling precipices, and houses in tiers one above another.

One comes sometimes abruptly on a picture which seems bewilderingly un-American, of a precipice wall covered with birdcage cottages, the little, paling-walled yard of one jutting out in a line with the chimney tops of the next one below, and so on down to the street at the base of the hill. Wooden staircases and bits of terrace link and loop the odd little perches together; bright green pepper trees, sometimes tall enough to shade two or three tiers of roofs, give a graceful plumed draping at the sides, and some of the steep fronts are covered with bloom, in solid curtains, of geranium, sweet alyssum, heliotrope, and ivy. These terraced aeries are not homes of the rich: the houses are Lilliputian in size and of cheap quality, but they do more for the picturesqueness of the city than all the large, fine, and costly houses put together.

Moreover, they are the only houses that command the situation, possess distance and a horizon. From some of these little ten-by-twelve flower beds of homes is a stretch of view which makes each hour of the day a succession of changing splendors—the snowy peaks of San Bernardino and San Jacinto in the east and south; to the west, vast open country, billowy green with vineyard and orchard; beyond this, in clear weather, shining glints and threads of ocean, and again beyond, in the farthest outing, hill-crowned islands, misty blue against the sky. No one knows Los Angeles who does not climb to these sunny, outlying heights and roam and linger on them many a day. Nor, even thus lingering, will anyone ever know more of Los Angeles than its lovely outward semblances and mysterious suggestions, unless he have the good fortune to win past the barrier of proud, sensitive, tender reserve, behind which is hid the life of the few remaining survivors of the old Spanish and Mexican regime.

From “Echoes in the City of the Angels.” Hunt was encouraged to write by Thomas Higginson, the editor who was also a promoter of the work of their mutual friend Emily Dickinson. Already an established poet and novelist when she  traveled to California in 1872, she became interested in the mistreatment of American Indians, publishing the exposé A Century of Dishonor in 1881 and the novel Ramona in 1884.