I first saw the lights of Paris a little before ten p.m.—or five p.m. New York time—and a few minutes later I was circling the Eiffel Tower at an altitude of about four thousand feet.

The lights of Le Bourget were plainly visible but appeared to be very close to Paris. I had understood that the field was farther from the city, so continued out to the northeast into the country for four or five miles to make sure that there was not another field farther out which might be Le Bourget. Then I returned and spiraled down closer to the lights. Presently I could make out long lines of hangars, and the roads appeared to be jammed with cars.

I flew low over the field once, then circled around into the wind and landed.

After the plane stopped rolling, I turned it around and started to taxi back to the lights. The entire field ahead, however, was covered with thousands of people all running toward my ship. When the first few arrived, I attempted to get them to hold the rest of the crowd back, away from the plane, but apparently no one could understand or would have been able to conform to my request if he had. 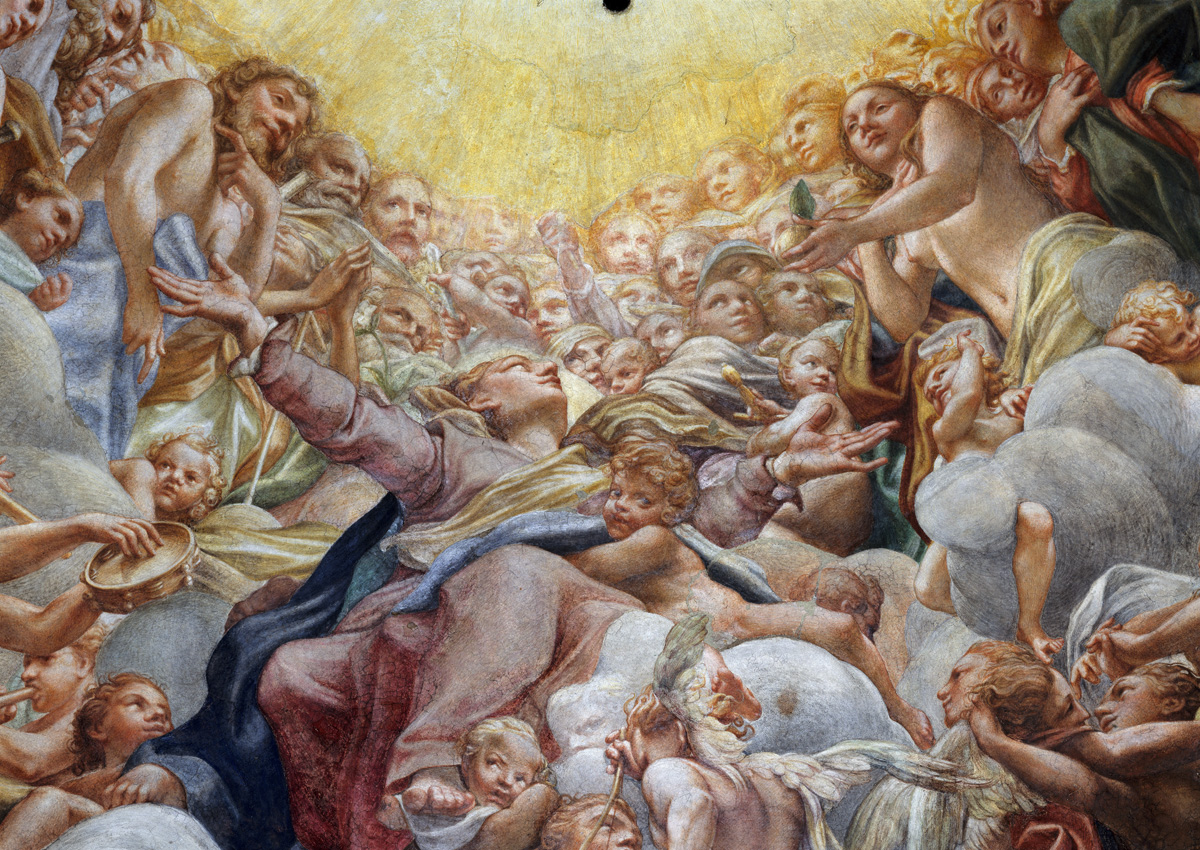 Mary separating Adam and Eve from the angels, fresco at the Duomo di Parma (detail), by Antonio Allegri Correggio, c. 1528.

I cut the switch to keep the propeller from killing someone and attempted to organize a guard for the plane. The impossibility of any immediate organization became apparent, and when parts of the ship began to crack from the pressure of the multitude, I decided to climb out of the cockpit in order to draw the crowd away.

Speaking was impossible; no words could be heard in the uproar, and nobody apparently cared to hear any. I started to climb out of the cockpit, but as soon as one foot appeared through the door, I was dragged the rest of the way without assistance on my part.

For nearly half an hour, I was unable to touch the ground, during which time I was ardently carried around in what seemed to be a small area, and in every position it is possible to be in. Everyone had the best of intentions, but no one seemed to know just what they were.

The French military fliers very resourcefully took the situation in hand. A number of them mingled with the crowd; then, at a given signal, they placed my helmet on an American correspondent and cried, “Here is Lindbergh.” That helmet on an American was sufficient evidence. The correspondent immediately became the center of attraction, and while he was being taken protestingly to the Reception Committee via a rather devious route, I managed to get inside one of the hangars.

From We. A million people were on hand at Le Bourget to greet Lindbergh, who had flown 3,610 miles in just under thirty-three and a half hours across the Atlantic. In 1932 his son was kidnapped and killed, the murderer executed four years later for “the crime of the century.” Lindbergh’s advocacy for neutrality in World War II drew criticism from FDR, but he later flew fifty missions in the Pacific.