On Wednesday evening at about eight, the king took water at Whitehall in an open barge and went up the river toward Chelsea.

Many other barges with persons of quality attended, and so great a number of boats that the whole river in a manner was cover’d; a city company’s barge was employ’d for the musick, wherein were fifty instruments of all sorts, who play’d all the way from Lambeth (while the barges drove with the tide without rowing, as far as Chelsea) the finest symphonies compos’d express for this occasion by Mr. Handel, which His Majesty liked so well that he caus’d it to be played over three times in going and returning. At eleven His Majesty went ashore at Chelsea, where a supper was prepar’d, and then there was another very fine consort of musick, which lasted till two, after which His Majesty came again into his barge and return’d the same way, the musick continuing to play till he landed.

An article in the Daily Courant. This newspaper account of the first performance of George Frideric Handel’s Water Music, performed for George I of Great Britain, was published two days after the festivities. “The Water Music commission was surely not ‘composed express for the occasion,’ as the Daily Courant would have us believe,” wrote British conductor Christopher Hogwood. “It would have been very unlike Handel to have resisted all recycling.” In 1977 Walt Disney World’s nightly Electrical Water Pageant began featuring selections from Water Music arranged for synthesizer. 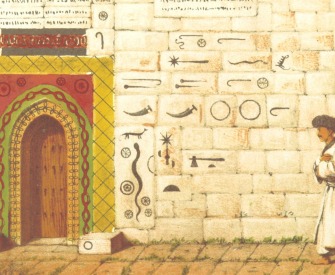 How ISIS is hastening the end of the Yezidis’ ancient oral tradition. More