The principal scene of the case is a typical aguaje (water) of southwestern Arizona, known as Tinajas Altas, or “High Tanks.” For the two half centuries during which California was a flourishing Mexican province, Tinajas Altas was reputed the sole sure “water” between Rio Sonoyta at Santo Domingo and Rio Colorado at Yuma on that desperately hard two-hundred-mile overland route known as El Camino del Diablo. Hardly a mile of it remains unmarked by one or more cruciform stone heaps attesting death by the wayside: death commonly in its cruelest form—by the torture of thirst.

Such was the site of my camp from May 20 to August 28. Just before noon of Monday, August 14, Pablo Valencia and Jesus Rios drifted into camp on horseback en route to the “lost mines” rediscovered by the former some months before. Next morning they got off at daybreak, about 3:45. Soon after midnight Jesus came in alone, reporting that Pablo had sent him back to rewater, he himself going forward on foot with a two-gallon canteen, under an agreement—an inane if not insane one in desert life—to rendezvous twenty-four to thirty hours later not on the trail but on the farther side of a nearby sierra. Jesus drank, ate, watered, fed, and struck the trail again. Next morning he again came in alone, reporting that his own animal had broken down after a short distance and that he had been unable to find either the lost man or his trail. I was convinced that further effort would be bootless, since Pablo had already been out over three days with only one day’s water.

On Wednesday, August 23, I awoke to find on the arroyo sands under an ironwood tree the wreck of Pablo. His itinerary, taken partly from his nearly meaningless maunderings as speech returned, runs thus:

Wednesday, August 16
Starting with the rise of the morning star, reached the ledge of which he was in quest about midforenoon; after collecting specimens, erected monuments and posted notices for a mineral claim, finishing this work before midday. Ate a little pinole and drank sparingly (as he had done before starting), for the canteen was nearly empty. Starting northward, began search for a road described (falsely) by Jesus, and straggled rather aimlessly over the sands, moistening his mouth occasionally but not swallowing water, until the canteen was empty; at nightfall reached an arroyo in which he fancied signs of water. In the darkness of the early night (before moonrise) abandoned his nuggets, and soon after threw away his stock of pinole and his coat and serape. Failing to find water, he sought sleep in the sands; and when awakened by mouth dryness obtained some relief—after the fashion of all Mexicans and most Americans in like cases—by occasionally filling his mouth and gargling his throat with urine.

Thursday, August 17
Set out early, seeking trails and tinajas, and working northward; unable to withstand the heat of midday, he lay down in an arroyo and ate calabasitas (wild gourds of intense bitterness), which his stomach rejected. Arising as the sun declined, he threw away shoes and trousers (with money, knife, and tobacco in the pockets), and wandered on northward, finding occasionally old trails that either faded away in a few miles or else led into sands or impassable rocks—trails mostly figments of disordered fancy. One led to an immense tinaja; but it was dry. During the day he had frequent recourse to urine, though he nearly lost the power to swallow; during the night he saved every drop of the excretion in the canteen, which he still carried. 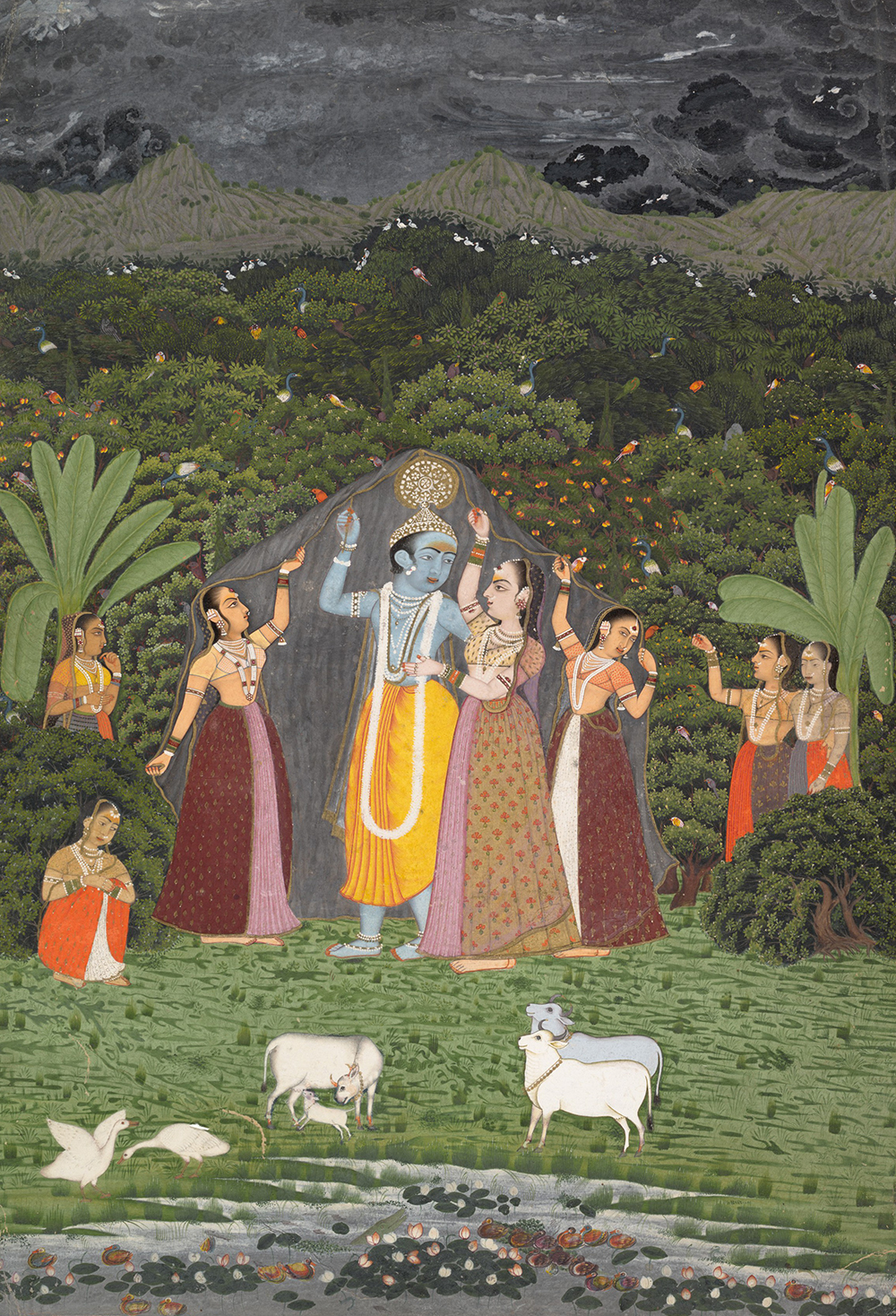 Krishna and the Gopis Take Shelter from the Rain (detail), India, 1760. The Metropolitan Museum of Art, Purchase, Mr. and Mrs. John Wiley and Cynthia Hazen Polsky Gifts, and Rogers Fund, 1991.

Friday, August 18
Toward evening he arose and chewed paloverde twigs with little effect save to irritate mouth and throat. Setting out northward before sunset, he found a mescal (a variety of agave) and chewed the stipes, extracting a little moisture; at sunset he caught a few flies and spiders, which he chewed and tried to swallow. Toward morning he became convinced that Jesus had deliberately misled and abandoned him with murderous intent in the plan of thus securing his El Dorado; and his wrath spurred him on with the aim of knifing his deceiver—a potent incentive that carried him miles and doubtless saved his life. He continued to relieve mouth thirst with urine.

Saturday, August 19
In early morning he found mule-wagon tracks and recognized the Old Yuma Trail, which he followed, but soon fell under the heat and lay all day in an arroyo. In the afternoon he saw one of the large light-green scorpions of the region; it looked luscious, and he captured it, ground off its sting with a stone, and devoured it. As before, he used urine, swallowing a part with great difficulty. Toward evening he resumed journeying northward, often falling; near morning he found (or thought he found) Jesus’ trail where he had wandered in search of the hopeless rendezvous set for the sixteenth. Throughout the night he caught occasional glimpses of a coyote trailing him. During all of Saturday and throughout this night on the trail, he was buoyed by a new incentive—the hope of reaching Tule Well and casting himself into the moist mud at its bottom and at the worst dying in the dampness and coolness thirty-seven feet below ground; he felt the notion half-insane and the hope wholly hopeless, yet unto them he clung as to an inspiration. Meantime, he constantly sought insects to chew and continued using his urine, now “mucho malo” (very bad).

Sunday, August 20
In early morning he pushed on westward, often sitting down, sometimes falling, and tried crawling—with little success. His vision was vague; the mountains danced, and the cactus and chaparral clumps moved to and fro before his eyes. After creeping to one or two tinajas—known to him of old—which he found dry, he lay all day in the shade of the rocks, using every drop of urine, which now dripped scantily and involuntarily. Toward evening he again bethought himself of Jesus and the pleasure of knifing him and was inspired to further effort; but he fell so often as he struggled forward that he was only at a remembered campsite three and a half miles west of Tule Well when day broke again.

Monday, August 21
On reaching at dawn the campsite, only nineteen miles from Tinajas Altas, he felt sure of relief and stretched himself across the trail so as not to be missed by rescuers—there he dozed and slept, starting up frequently at fancied sounds of wheels and hooves; the buzzards, which had followed him for two days, now came almost within hand reach. The sleep and coolness (only 91 degrees) of the day and the short distance traversed the night before had their effect; he felt stronger, and toward sunset he set out again westward along the trail, buoyed by the certainty of at least finding full canteens (of which Jesus had indeed left two, at impossible places). He often thought he saw Tinajas Altas with abundant water and food just before him, yet was not wholly cast down on feeling a landmark he knew to be miles away; so he made, with many rests and naps, twelve miles.

Every memory everyone has ever had will eventually be underwater.

Tuesday, August 22
In early dawn his mind was reaching out buoyantly to Tinajas Altas as but a few steps away, when he half saw, and then fully felt all over, the six-mile guidepost (about seven miles from camp), and awoke to the sad certainty that no canteen hung there, and the still more crushing realization that he could not cover the remaining miles of sand—for his urine had ceased to flow hours before, and he felt his last recourse gone. As the sun rose, he sought the shade of a shrub and there knelt in final prayer for the dying; then he laid himself down with feet and face to the eastward, made the sign of the cross with a pang over the absence of consecrated water, and composed himself for the end. There—and this was his clearest concept, unreal though it be—with the rising of the sun he died, and his body lay lifeless under the burning rays, though his innermost self hovered about, loath to leave the material husk about which the buzzards waited patiently. The sun swung across the shimmering vault, and darkness fell; in the chill of evening (fortunately an exceptionally cool night—just above 82 degrees) some vague shadow external to his ego stirred and then struggled aimlessly against chaparral and cactus along the most trying stretch of El Camino del Diablo. Sometimes he felt half-alive and wrung by agony of severing spirit and flesh; oftener he felt that the naked body was pushed and dragged and belabored and tortured by something outside; he knew its voice tried to cry out in protest or call for rescue but did not feel the voice his own. So the night dragged on and on, until at early dawn the vague consciousness knew itself near the camp with the certainty of relief, and was dimly surprised at the bellowing break in a final call.

Wednesday, August 23
After uttering this call, he crawled some fifty yards down the last descent to the arroyo below the Mesa of the Forty Graves. Of this day, with its physical shock and psychical break, Pablo remembered nothing clearly.

From “Desert Thirst as Disease.” Pablo lost up to forty pounds but survived this ordeal. McGee spent a decade conducting geological surveys for the U.S. government before being hired in 1893 to run the newly formed Bureau of American Ethnology. He was one of the first researchers to study the southwestern corner of the Arizona Territory. Elsewhere he writes of Death Valley as a place where “thirst abides,” in which “the ‘last water’ and ‘next water’ are ever present and dominant ideas.” In 1906, a year after Valencia’s experience, McGee delivered this paper—which describes five “phases of thirst”—to a group of Missouri doctors.