We carried in the steerage nearly a hundred passengers—a little world of poverty. And as we came to know individuals among them by sight—from looking down upon the deck where they took the air in the daytime, and cooked their food, and very often ate it too—we became curious to know their histories, with what expectations they had gone out to America, on what errands they were going home, and what their circumstances were. The information we got on these heads from the carpenter, who had charge of these people, was often of the strangest kind. Some of them had been in America but three days, some but three months, and some had gone out in the last voyage of that very ship in which they were now returning home. Others had sold their clothes to raise the passage money, and had hardly rags to cover them; others had no food and lived upon the charity of the rest; and one man, it was discovered nearly at the end of the voyage, not before—for he kept his secret close, and did not court compassion—had had no sustenance whatever but the bones and scraps of fat he took from the plates used in the after-cabin dinner, when they were put out to be washed.

The whole system of shipping and conveying these unfortunate persons is one that stands in need of thorough revision. If any class deserve to be protected and assisted by the government, it is that class who are banished from their native land in search of the bare means of subsistence. All that could be done for these poor people by the great compassion and humanity of the captain and officers was done, but they require much more. The law is bound, at least upon the English side, to see that too many of them are not put on board one ship, and that their accommodations are decent, not demoralising and profligate. It is bound too, in common humanity, to declare that no man shall be taken on board without his stock of provisions being previously inspected by some proper officer and pronounced moderately sufficient for his support upon the voyage. It is bound to provide, or to require that there be provided, a medical attendant; whereas in these ships there are none, though sickness of adults and death of children on the passage are matters of the very commonest occurrence. Above all, it is the duty of any government, be it monarchy or republic, to interpose and put an end to that system by which a firm of traders in emigrants purchase of the owners the whole ’tween-decks of a ship, and send on board as many wretched people as they can lay hold of—on any terms they can get—without the smallest reference to the conveniences of the steerage, the number of berths, the slightest separation of the sexes, or anything but their own immediate profit. Nor is even this the worst of the vicious system, for certain crimping agents of these houses—who have a percentage on all the passengers they inveigle—are constantly traveling about those districts where poverty and discontent are rife and tempting the credulous into more misery by holding out monstrous inducements to emigration which can never be realised.

The history of every family we had on board was pretty much the same. After hoarding up, borrowing, begging, and selling everything to pay the passage, they had gone out to New York expecting to find its streets paved with gold—and had found them paved with very hard and very real stones. Enterprise was dull; labourers were not wanted; jobs of work were to be got, but the payment was not. They were coming back even poorer than they went. One of them was carrying an open letter from a young English artisan—who had been in New York a fortnight—to a friend near Manchester, whom he strongly urged to follow him. One of the officers brought it to me as a curiosity. “This is the country, Jem,” said the writer. “I like America. There is no despotism here; that’s the great thing. Employment of all sorts is going a-begging and wages are capital. You have only to choose a trade, Jem, and be it. I haven’t made choice of one yet, but I shall soon. At present I haven’t quite made up my mind whether to be a carpenter—or a tailor.” 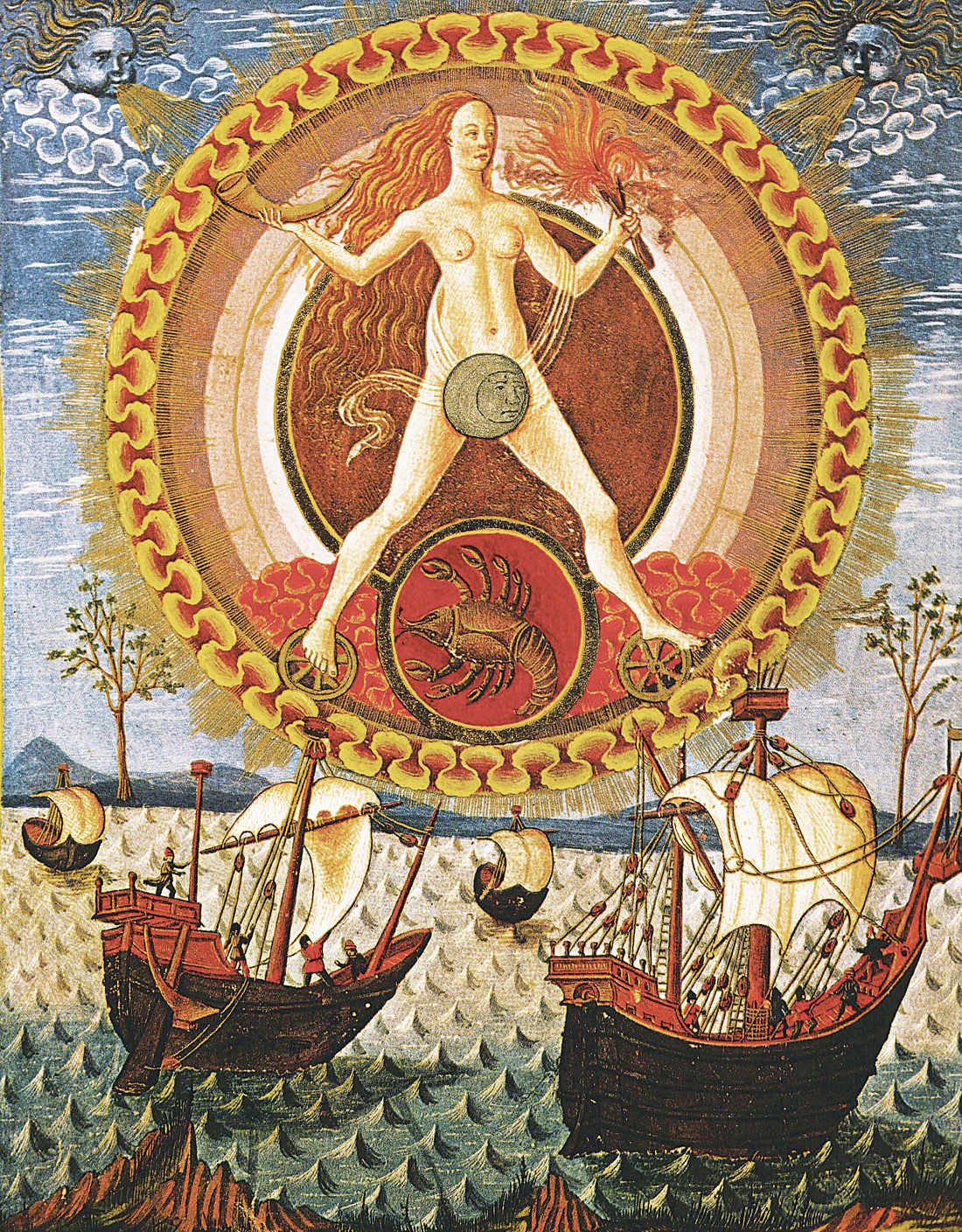 The moon accompanies ships sailing under the sign of Cancer, from a manuscript of De Sphaera, fifteenth century. Biblioteca Estense, Modena, Italy.

There was yet another kind of passenger, and but one more, who, in the calm and the light winds, was a constant theme of conversation and observation among us. This was an English sailor, a smart, thorough-built, English man-of-war’s man, from his hat to his shoes, who was serving in the American navy—and having got leave of absence was on his way home to see his friends. When he presented himself to take and pay for his passage, it had been suggested to him that being an able seaman he might as well work it and save the money, but this piece of advice he very indignantly rejected, saying, “He’d be damned but for once he’d go aboard ship, as a gentleman.” Accordingly, they took his money, but he no sooner came aboard than he stowed his kit in the forecastle, arranged to mess with the crew, and the very first time the hands were turned up, went aloft like a cat before anybody. And all through the passage there he was, first at the braces, outermost on the yards, perpetually lending a hand everywhere, but always with a sober dignity in his manner, and a sober grin on his face, which plainly said, “I do it as a gentleman. For my own pleasure, mind you!”

At length and at last, the promised wind came up in right good earnest, and away we went before it, with every stitch of canvas set, slashing through the water nobly. There was a grandeur in the motion of the splendid ship, as overshadowed by her mass of sails. She rode at a furious pace upon the waves, which filled one with an indescribable sense of pride and exultation. As she plunged into a foaming valley, how I loved to see the green waves, bordered deep with white, come rushing on astern to buoy her upward at their pleasure and curl about her as she stooped again—but always own her for their haughty mistress still! On, on we flew, with changing lights upon the water, being now in the blessed region of fleecy skies; a bright sun lighting us by day, and a bright moon by night; the vane pointing directly homeward, alike the truthful index to the favouring wind and to our cheerful hearts; until at sunrise, one fair Monday morning—the twenty-seventh of June, I shall not easily forget the day—there lay before us, old Cape Clear, God bless it, showing in the mist of early morning like a cloud—the brightest and most welcome cloud, to us, that ever hid the face of Heaven’s fallen sister—Home.

The friendly breeze freshened again next day, and on we went once more before it gallantly, descrying now and then an English ship going homeward under shortened sail, while we with every inch of canvas crowded on, dashed gaily past, and left her far behind. Toward evening the weather turned hazy, with a drizzling rain—and soon became so thick that we sailed, as it were, in a cloud. Still we swept onward like a phantom ship, and many an eager eye glanced up to where the lookout on the mast kept watch for Holyhead.

At length his long-expected cry was heard, and at the same moment there shone out from the haze and mist ahead a gleaming light, which presently was gone, and soon returned, and soon was gone again. Whenever it came back, the eyes of all on board brightened and sparkled like itself, and there we all stood watching this revolving light upon the rock at Holyhead, and praising it for its brightness and its friendly warning, and lauding it, in short, above all other signal lights that ever were displayed, until it once more glimmered faintly in the distance far behind us.

Then it was time to fire a gun, for a pilot; and almost before its smoke had cleared away, a little boat with a light at her masthead came bearing down upon us through the darkness, swiftly. And presently, our sails being backed, she ran alongside; and the hoarse pilot, wrapped and muffled in peacoats and shawls to the very bridge of his weather-ploughed-up nose, stood bodily among us on the deck. And I think if that pilot had wanted to borrow fifty pounds for an indefinite period on no security, we should have engaged to lend it him before his boat had dropped astern, or (which is the same thing) before every scrap of news in the paper he brought with him had become the common property of all on board.

We turned in pretty late that night and turned out pretty early next morning. By six o’clock we clustered on the deck, prepared to go ashore—and looked upon the spires and roofs, and smoke, of Liverpool. By eight we all sat down in one of its hotels to eat and drink together for the last time. And by nine we had shaken hands all round and broken up our social company forever.

The country, by the railroad, seemed, as we rattled through it, like a luxuriant garden. The beauty of the fields (so small they looked!), the hedgerows, and the trees; the pretty cottages, the beds of flowers, the old churchyards, the antique houses, and every well-known object; the exquisite delights of that one journey, crowding in the short compass of a summer’s day, the joy of many years, and winding up with home and all that makes it dear—no tongue can tell, or pen of mine describe.

From American Notes. After publishing Oliver Twist and Nicholas Nickelby, Dickens went on vacation with his wife to America in 1842, where he traveled as far west as St. Louis and as far north as Toronto. Unconvinced by the advertisements for the American Dream, Dickens wrote that Washington, DC, was mainly a place of “slavery, spittoons, and senators.”

“Government, like dress, is the badge of lost innocence.”More