We took passage in one of the fast boats of the St. Louis and St. Paul Packet Company, and started up the river.

When I as a boy first saw the mouth of the Missouri River, it was twenty-two or twenty-three miles above St. Louis, according to the estimate of pilots; the wear and tear of the banks has moved it down eight miles since then; and the pilots say that within five years the river will cut through and move the mouth down five miles more, which will bring it within ten miles of St. Louis.

About nightfall we passed the large and flourishing town of Alton, Illinois, and before daylight next morning the town of Louisiana, Missouri, a sleepy village in my day, but a brisk railway center now; however, all the towns out there are railway centers now. I could not clearly recognize the place. This seemed odd to me, for when I retired from the rebel army in ’61, I retired upon Louisiana in good order—at least in good enough order for a person who had not yet learned how to retreat according to the rules of war and had to trust to native genius. It seemed to me that for a first attempt at a retreat it was not badly done. I had done no advancing in all that campaign that was at all equal to it.

There was a railway bridge across the river here well sprinkled with glowing lights, and a very beautiful sight it was.

At seven in the morning we reached Hannibal, Missouri, where my boyhood was spent. I had had a glimpse of it fifteen years ago, and another glimpse six years earlier, but both were so brief that they hardly counted. The only notion of the town that remained in my mind was the memory of it as I had known it when I first quitted it twenty-nine years ago. That picture of it was still as clear and vivid to me as a photograph. I stepped ashore with the feeling of one who returns out of a dead-and-gone generation. I had a sort of realizing sense of what the Bastille prisoners must have felt when they used to come out and look upon Paris after years of captivity and note how curiously the familiar and the strange were mixed together before them. I saw the new houses—saw them plainly enough—but they did not affect the older picture in my mind, for through their solid bricks and mortar I saw the vanished houses, which had formerly stood there, with perfect distinctness.

See one promontory (said Socrates of old), one mountain, one sea, one river, and see all.

It was Sunday morning, and everybody was abed yet. So I passed through the vacant streets, still seeing the town as it was—and not as it is—and recognizing and metaphorically shaking hands with a hundred familiar objects which no longer exist, and finally climbed Holiday’s Hill to get a comprehensive view. The whole town lay spread out below me then, and I could mark and fix every locality, every detail. Naturally, I was a good deal moved. I said, “Many of the people I once knew in this tranquil refuge of my childhood are now in heaven; some, I trust, are in the other place.”

The things about me and before me made me feel like a boy again—convinced me that I was a boy again, and that I had simply been dreaming an unusually long dream; but my reflections spoiled all that, for they forced me to say, “I see fifty old houses down yonder, into each of which I could enter and find either a man or a woman who was a baby or unborn when I noticed those houses last, or a grandmother who was a plump young bride at that time.”

From this vantage ground the extensive view up and down the river, and wide over the wooded expanses of Illinois, is very beautiful, one of the most beautiful on the Mississippi, I think—which is a hazardous remark to make, for the eight hundred miles of river between St. Louis and St. Paul afford an unbroken succession of lovely pictures. It may be that my affection for the one in question biases my judgment in its favor—I cannot say as to that. No matter, it was satisfyingly beautiful to me, and it had this advantage over all the other friends whom I was about to greet again: it had suffered no change; it was as young and fresh and comely and gracious as ever it had been; whereas, the faces of the others would be old, and scarred with the campaigns of life, and marked with their griefs and defeats, and would give me no upliftings of spirit.

An old gentleman out on an early morning walk came along, and we discussed the weather and then drifted into other matters. I could not remember his face. He said he had been living here twenty-eight years. So he had come after my time, and I had never seen him before. I asked him various questions; first about a mate of mine in Sunday school—what became of him?

“He graduated with honor in an eastern college, wandered off into the world somewhere, succeeded at nothing, passed out of knowledge and memory years ago, and is supposed to have gone to the dogs.”

“He was bright and promised well when he was a boy.”

“Yes, but the thing that happened is what became of it all.”

I asked after another lad, altogether the brightest in our village school when I was a boy.

“He, too, was graduated with honors from an eastern college, but life whipped him in eve­ry battle, straight along, and he died in one of the territories years ago, a defeated man.”

I asked after another of the bright boys.

“He is a success, always has been—always will be, I think.”

I inquired after a young fellow who came to the town to study for one of the professions when I was a boy.

“He went at something else before he got through—went from medicine to law, or from law to medicine—then to some other new thing; went away for a year, came back with a young wife; fell to drinking, then to gambling behind the door; finally took his wife and two children to her father’s and went off to Mexico; went from bad to worse, and finally died there, without a cent to buy a shroud, and without a friend to attend the funeral.”

“Pity, for he was the best natured and most cheery and hopeful young fellow that ever was.”

I named another boy.

“Oh, he is all right. Lives here yet—has a wife and children and is prospering.”

“The first two live here, are married, and have children; the other is long ago dead—never married.”

I named, with emotion, one of my early sweethearts.

“She is all right. Been married three times; buried two husbands, divorced from the third, and I hear she is getting ready to marry an old fellow out in Colorado somewhere. She’s got children scattered around here and there, most everywheres.” 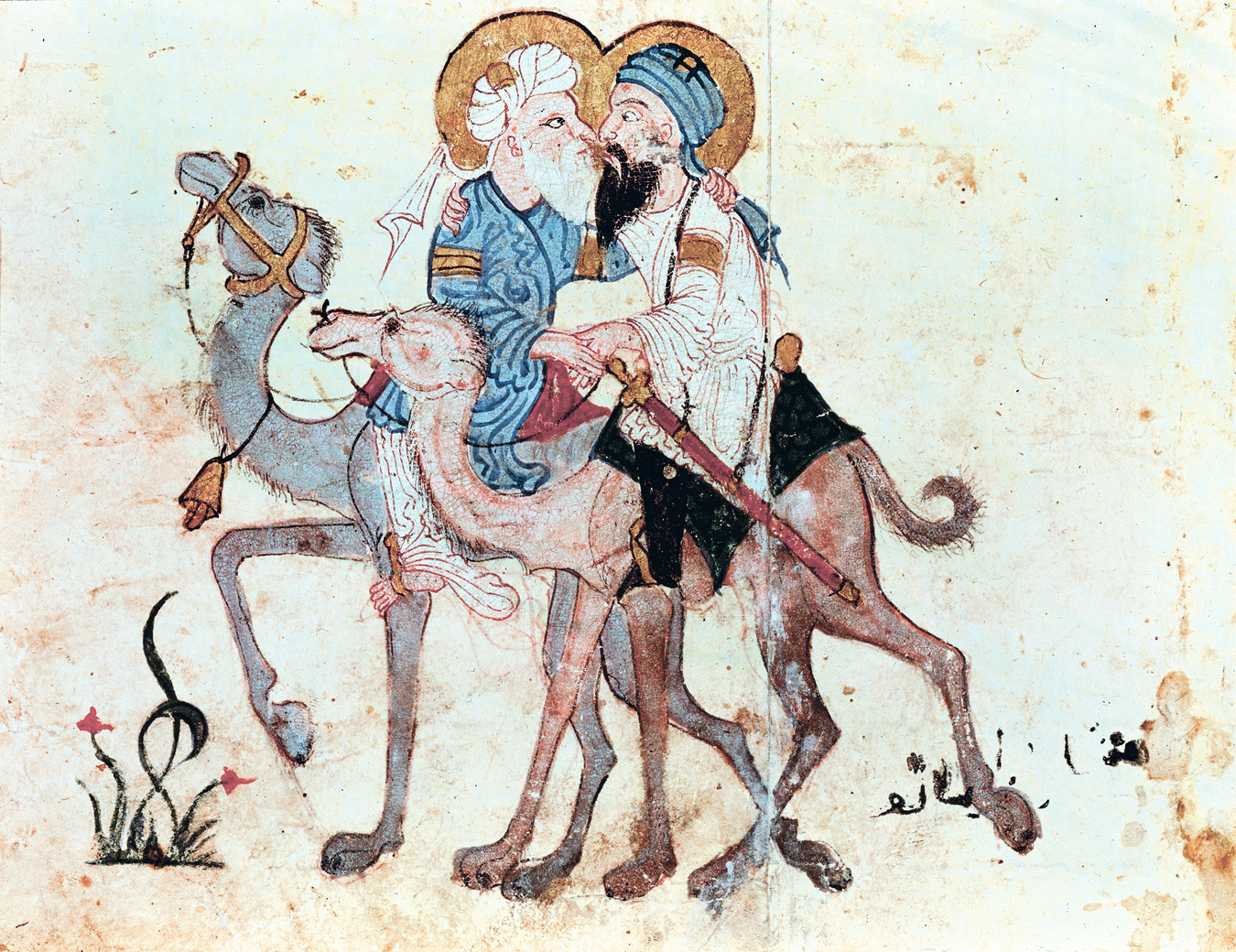 Farewells before the return to Mecca, from a manuscript of al-Hariri’s Maqamat, Baghdad, c. 1240. National Library of France, Department of Manuscripts, Ms. 3929 f. 122.

The answer to several other inquiries was brief and simple:

“Killed in the war.”

I named another boy.

“Well now, his case is curious! There wasn’t a human being in this town but knew that that boy was a perfect chucklehead—perfect dummy, just a stupid ass, as you may say. Everybody knew it, and everybody said it. Well, if that very boy isn’t the first lawyer in the state of Missouri today, I’m a Democrat!”

“It’s actually so. I’m telling you the truth.”

“Account for it? There ain’t any accounting for it, except that if you send a d—–d fool to St. Louis, and you don’t tell them he’s a d—–d fool, they’ll never find it out. There’s one thing sure: if I had a d—–d fool I should know what to do with him: ship him to St. Louis—it’s the noblest market in the world for that kind of property. Well, when you come to look at it all around and chew at it and think it over, don’t it just bang anything you ever heard of?”

“Well, yes—it does seem to. But don’t you think maybe it was the Hannibal people who were mistaken about the boy, and not the St. Louis people?”

“Oh, nonsense! The people here have known him from the very cradle—they knew him a hundred times better than the St. Louis idiots could have known him. No, if you have got any d—–d fools that you want to realize on, take my advice—send them to St. Louis.”

I mentioned a great number of people whom I had formerly known. Some were dead, some were gone away, some had prospered, some had come to naught; but as regarded a dozen or so of the lot, the answer was comforting:

“Died in the insane asylum three or four years ago—never was out of it from the time she went in, and was always suffering too—never got a shred of her mind back.”

If he spoke the truth, here was a heavy tragedy, indeed. Thirty-six years in a madhouse, that some young fools might have some fun! I was a small boy at the time, and I saw those giddy young ladies come tiptoeing into the room where Miss —– sat reading at midnight by a lamp. The girl at the head of the file wore a shroud and a doughface; she crept behind the victim, touched her on the shoulder, and she looked up and screamed, and then fell into convulsions. She did not recover from the fright, but went mad. In these days it seems incredible that people believed in ghosts so short a time ago. But they did.

After asking after such other folk as I could call to mind, I finally inquired about myself.

“Oh, he succeeded well enough—another case of a d—–d fool. If they’d sent him to St. Louis, he’d have succeeded sooner.”

It was with much satisfaction that I recognized the wisdom of having told this candid gentleman, in the beginning, that my name was Smith.

From Life on the Mississippi. After his older brother bought the Hannibal Journal in 1851, Samuel Clemens set type and wrote sketches for the paper. He left home in 1853 at the age of seventeen, piloting steamboats on the Mississippi River and panning for gold in Nevada. He published The Adventures of Tom Sawyer in 1876, the same year he began writing Huckleberry Finn, which would not be finished until 1884.

The devotions of the dervishes. More