I shall tell of certain marvels wrought through the agency of art and of nature. In these there is no magic whatsoever, because all magical power is inferior to these works and incompetent to accomplish them.

It is possible that great ships and seagoing vessels shall be made that can be guided by one man and will move with greater swiftness than if they were full of oarsmen.

It is possible that a car shall be made that will move with inestimable speed, and the motion will be without the help of any living creature.

It is possible that a device for flying shall be made such that a man sitting in the middle of it and turning a crank shall cause artificial wings to beat the air after the manner of a bird’s flight.

Similarly, it is possible to construct a small-sized instrument for elevating and depressing great weights, a device that is most useful in certain exigencies. For a man may ascend and descend, and may deliver himself and his companions from peril of prison, by means of a device of small weight and of a height of three fingers and a breadth of four.

It is possible also easily to make an instrument by which a single man may violently pull a thousand men toward himself in spite of opposition, or other things that are tractable.

It is possible also that devices can be made whereby, without bodily danger, a man may walk on the bottom of the sea or of a river. Alexander used these to observe the secrets of the sea, as Ethicus the astronomer relates.

These devices have been made in antiquity and in our own time, and they are certain. I am acquainted with them explicitly, except with the instrument for flying, which I have not seen. And I know no one who has seen it. But I know a wise man who has thought out the artifice. Infinite other such things can be made, as bridges over rivers without columns or supports, and machines, and unheard-of engines.

Certain physical figurations are especially marvelous, for mirrors and perspective devices can be so arranged that one appears many, one man an army, and the sun and moon as many as we wish. So mists and vapors sometimes occur in such manner that two suns, or even three, or two moons, appear simultaneously in the heavens. Since one thing by this means may appear to be many or to be infinite in number, and since it thus actually exceeds its own virtue, then there is no number that is determinate. By this means, infinite terror may be cast upon a whole city or upon an army, so that it will go entirely to pieces because of the apparent multitude of the stars or of men congregated about it, especially if there be joined to this device another by which perspectives are contrived so that the most distant objects appear near at hand and vice versa.

We may read the smallest letters at an incredible distance, we may see objects however small they may be, and we may cause the stars to appear wherever we wish. So, it is thought, Julius Caesar spied into Gaul from the seashore and by optical devices learned the position and arrangement of the camps and towns of Brittany. Devices may be so contrived that the largest objects appear smallest, that the highest appear low and infamous, and that hidden things appear manifest. 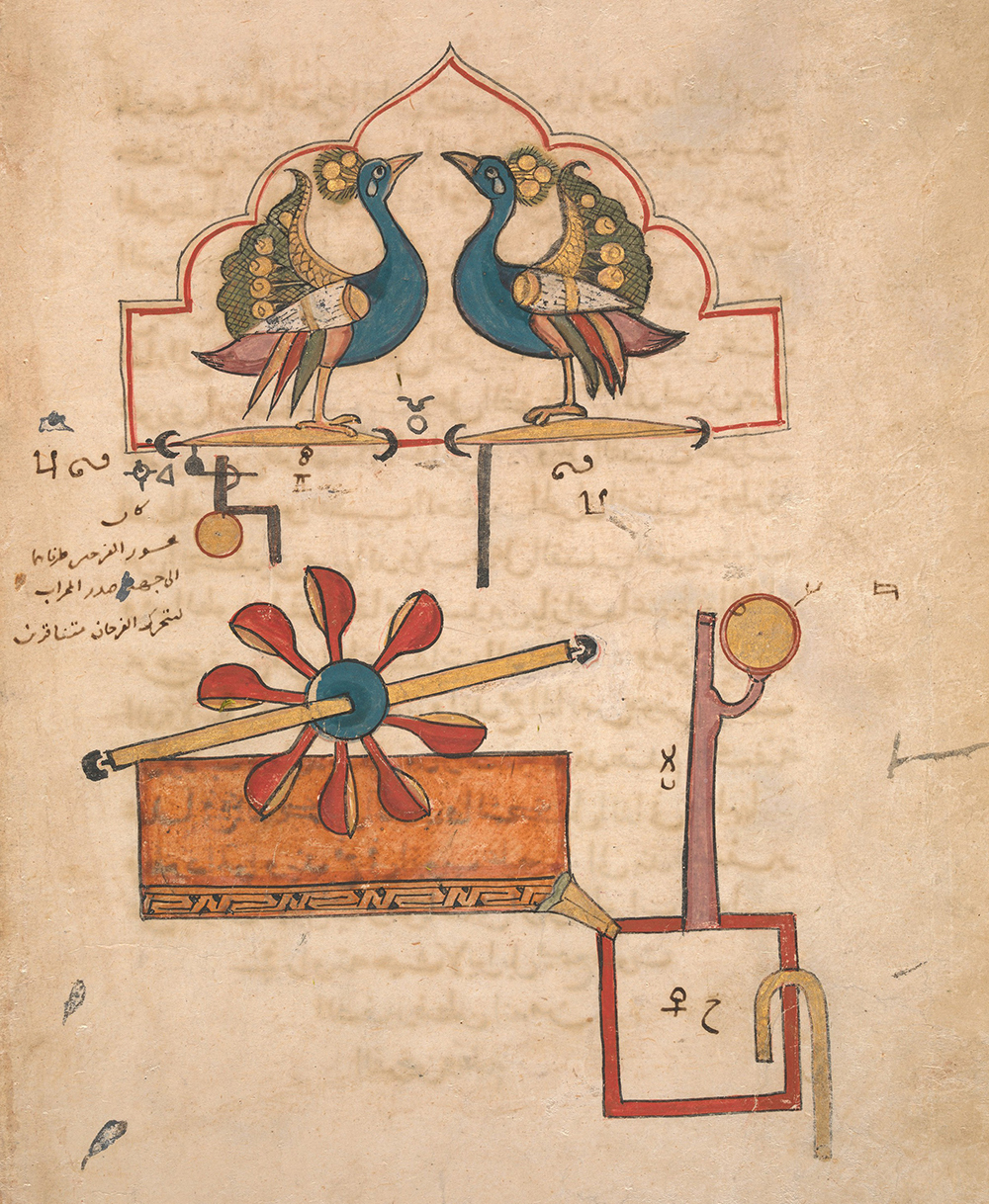 Water Clock of the Peacocks, miniature from a 1315 edition of al-Jazari’s Book of Knowledge of Ingenious Mechanical Devices. The Metropolitan Museum of Art, Rogers Fund, 1955.

Mirrors may be so arranged that a man coming into a house shall really see gold, silver, precious stones, and whatever a man desires, but whoever approaches the place will find nothing.

But of sublimer powers is that device by which rays of light are led into any place that we wish and are brought together by refractions and reflections in such fashion that anything is burned which is placed there. And these burning glasses function in both directions, as certain authors teach in their books.

But there are greater than these. The great power of mathematics can build a spherical instrument, like the artifice of Ptolemy in Almagest, in which all heavenly bodies are described veraciously as regards longitude and latitude, but to make them move naturally in their diurnal movement is not within the power of mathematics. A faithful and magnificent experimenter might aspire to construct an instrument of such materials and of such an arrangement that it would move naturally in the diurnal motion of the heavens, a thing which seems possible because many things are determined by the movement of the heavens, such as comets, the tides of the sea, and other things wholly and in part. In the presence of this instrument, all other apparatuses of the astrologers, whether the product of wisdom or mere vulgar equipment, would cease to count anymore. The treasure of a king would scarcely merit comparison with it.

From Letter Concerning the Marvelous Power of Art and Nature and the Nullity of Magic. Having completed his studies at the University of Oxford, Bacon around 1237 moved from his native England to Paris, where he delivered lectures on Aristotle until, a decade later, his interests turned to alchemy and the natural sciences. From then on he wrote little beyond letters to friends until around 1266, when at the request of Pope Clement IV he began composing a universal encyclopedia in three parts. “I repent,” he is said to have declared on his deathbed in 1292, “of having given myself so much trouble to destroy ignorance.”