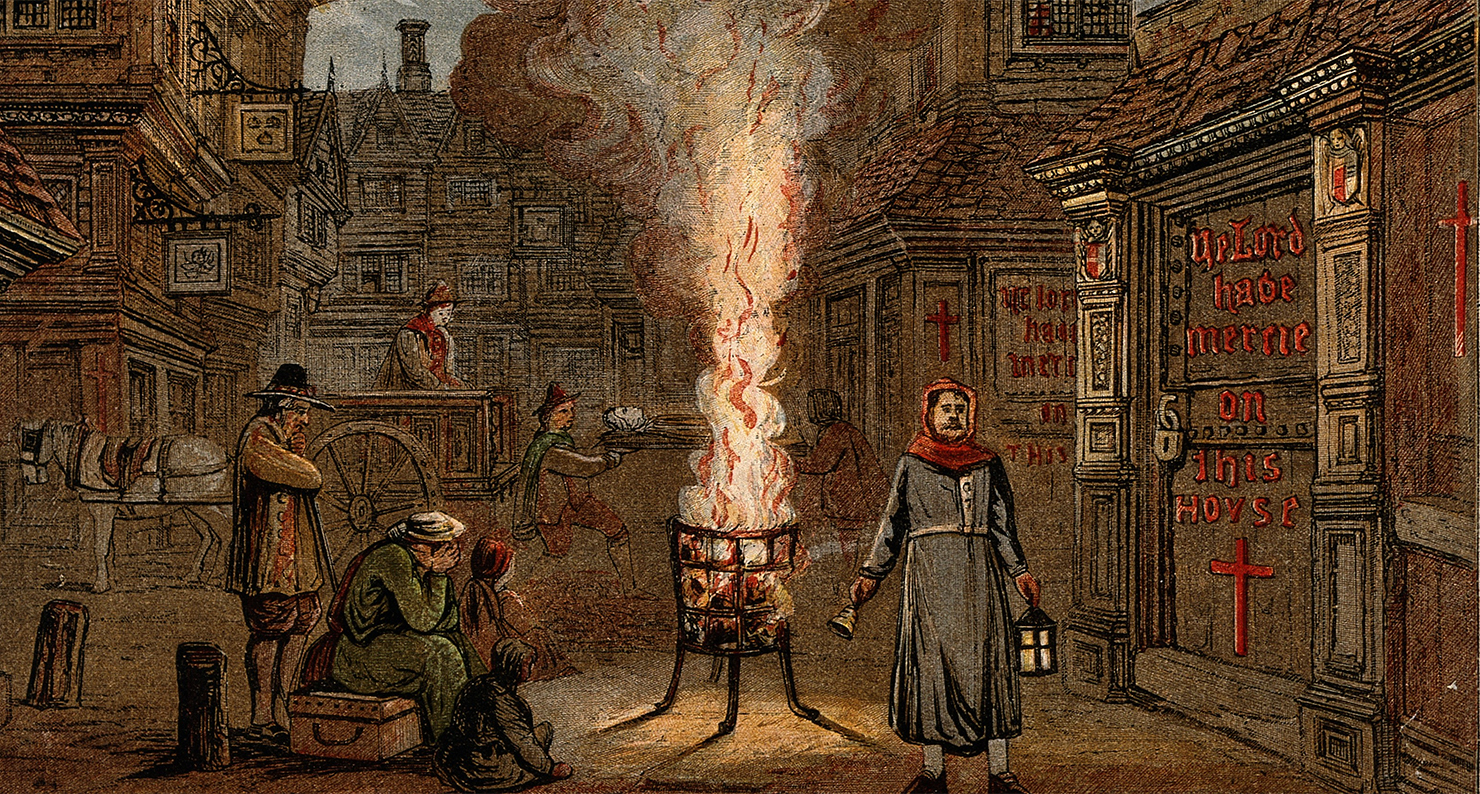 “Bring Out Your Dead.” A street during the Great Plague in London, 1665, with a death cart and mourners, by Edmund Evans, c. 1864. The Wellcome Library, London.

You can barely flee down a city block these days without running smack into the middle of the newest zombie apocalypse, a genre usually traced back to Richard Matheson’s 1954 survivor novel, I Am Legend, but which finds a much more venerable precursor in Daniel Defoe’s A Journal of the Plague Year.

Defoe’s novel, published in 1722, is a mutant factual-fiction that recounts the plague epidemic of 1665, which dispatched almost 100,000 Londoners. Purporting to be the “memorial” of a survivor known only as “H.F.”, it was based on genuine documentary sources, including the diary of Defoe’s uncle.

For something so grounded in fact, A Journal of the Plague Year conforms to the expectations of zombie narratives in almost every way. People look to the skies for the origin of the pestilence, as in George A. Romero’s Day of the Dead; its city of spacious abandonment and grassed-over streets anticipates the empty metropolis of Danny Boyle’s 28 Days Later; and as the King takes flight and the law implodes, the living are faced with the decision to team-up or go it alone in the style of Robert Kirkman’s The Walking Dead, where zombie-battling is merely a skull-cleaving interlude between the real battles for resources.

What A Journal of the Plague Year doesn’t have is zombies—at least not explicitly. Still, the numberless, suppurating victims are apt to behave like the undead at every turn, crowding the novel with “walking putrefied carcasses, whose breath was infectious and sweat poison.” These abject and degenerating bodies, disfigured by the “tokens” of disease that look like “small Knobs…of callous or Horn,” can turn on others, even running through the streets actively seeking to infect people impressed “with a kind of Rage, and a hatred against their own Kind,” as if the sickness itself were filled with an “evil Will” determined “to communicate it self.” Thus babies kill their mothers, and men tackle women in the street hoping to infect them with a deadly kiss. Others manage to dodge the disease, only to be disfigured by the weight of madness or grief.

Granted, there is none of the urgent panic attendant on hacking one’s way through a shambling horde only to turn around and see the second wave. This lends the novel a kind of studious detachment as H.F. traverses the city in an effort to comprehend the scope of the visitation through a process of quantification and statistical computation—tallying the bills of mortality, measuring the size of the municipal grave pits, and delineating the necrotic geography of ravaged neighborhoods. Even in this, H.F. is thwarted, as the plague outruns information, spreading faster than the news, eroding actionable knowledge into useless nubs of hearsay.

Ultimately, as with all these narratives, the real plague is modern life. Physicians trace the disease to a package of silks imported from Holland that originated in the Levant, spreading the infection through the ports, mills, marketplaces and manufactories that form the early-modern economy. Quarantines and barricades prove useless against the commodity’s voyage; but while the products themselves may be infectious, it’s the appetite to possess them that truly kills. In this, A Journal of the Plague Year presages the lurching mallrats of Romero’s Dawn of the Dead, who continue the puppetry of consumption into the undead afterlife, a theme that is similarly taken up in Colson Whitehead’s new novel, Zone One, where the post-apocalyptic reconstruction of New York provides opportunities for branding and product placement, and where the “Ambassadors of nil” evoke nothing so hellish as Times Square tourists, boring girlfriends, and the hollow communications of sitcoms and social media. In Whitehead’s apocalypse, Manhattan attains its logical apotheosis, whereas in Defoe’s, the London plague runs its course within a year—just in time for the Great Fire to burn the whole thing down.

Andrew McConnell Stott is Professor of English and College Dean of Undergraduate Education at the University of Southern California. He is the author, most recently, of The Poet and the Vampyre: The Curse of Byron and the Birth of Literature’s Greatest Monsters.