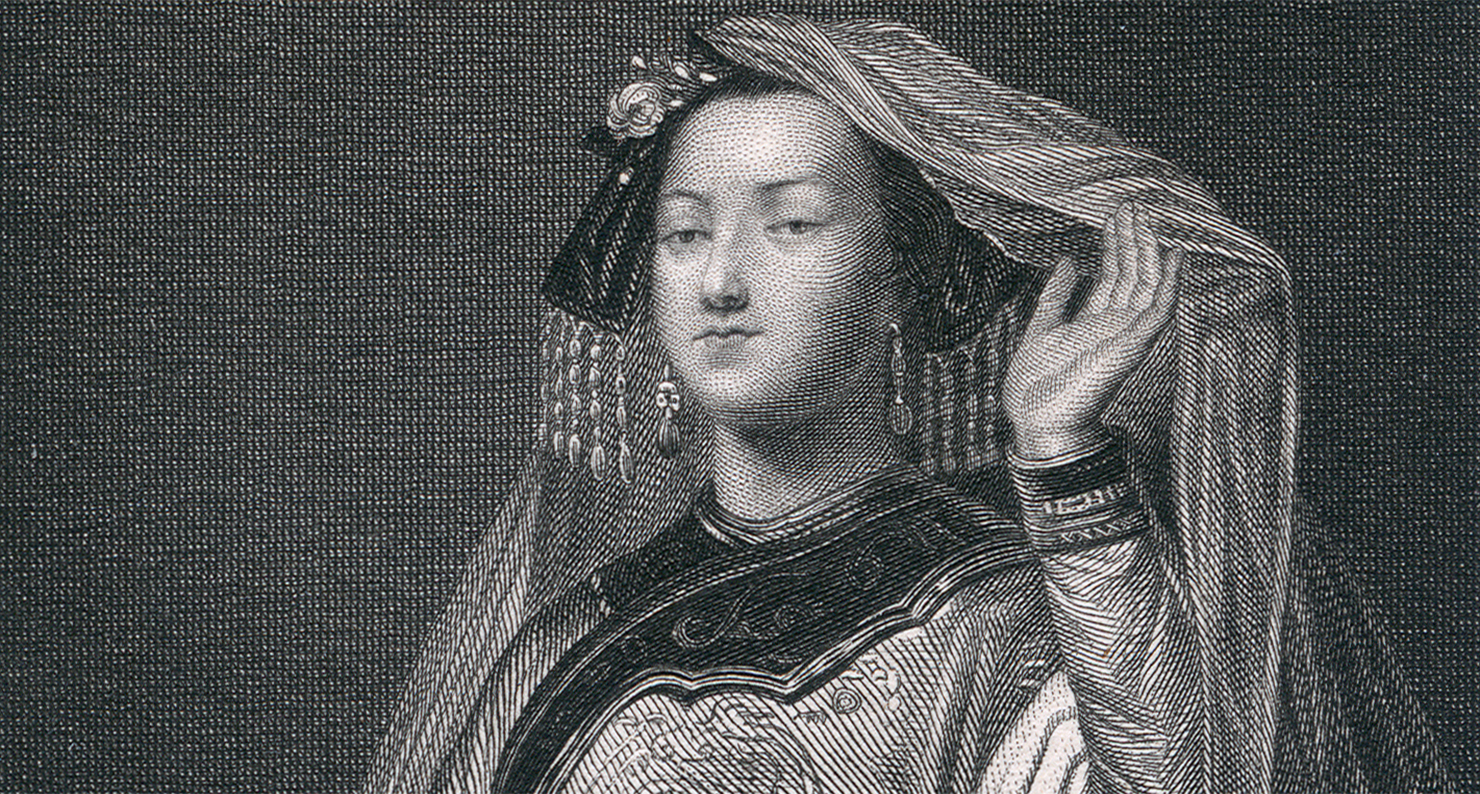 When Mongolian men wrestle in the Naadam games held annually since Genghis Khan founded the nation in 1206, they wear a particular vest with long sleeves but no shoulder covering and a completely open front exposing the whole of the chest, thereby allowing each wrestler to be certain that his opponent is male. At the end of each match, the winner stretches out his arms to display his chest again, and he slowly waves his arms in the air like a bird, turning for all to see. For the winner it is a victory dance, but it is also a tribute to the greatest female athlete in Mongolian history, a wrestling princess whom no man ever defeated. Ever since she reigned as the wrestling champion of the Mongols in the thirteenth century, however, male wrestlers have only wrestled men.

The princess, a great-great granddaughter of Genghis Khan, was born about 1260 and is known by several names: Khutulun, Aiyurug, or Aijaruc, all referring to moonlight. In opposition to her cousin, the emperor Kublai Khan, who enjoyed the luxury of the Chinese court, Khutulun rejected the temptations of sedentary civilization and sought to maintain the hardy Mongol way of life. She was a large and powerfully built woman, and she used her size and strength in the three Mongol sports of horsemanship, archery, and wrestling, as well as in the primary Mongol vocation of warfare.

Mongolian wrestlers were not paired by size or weight, and the rounds had neither spatial no temporal limits. The two opponents grabbed the other’s arms or waist until one forced the other to the ground. If any part of the body touched the ground, no matter how briefly, that contestant lost. Smaller or less skilled wrestlers might be thrown in a few seconds, but evenly matched wrestlers sometimes locked their arms around each other and pushed other back and forth like two bull elephants for as long as necessary until one competitor dropped.

Khutulun grew up with fourteen brothers and seemingly learned from an early age how to confront and beat them. As she grew older, she joined the public competitions and acquired great fame as the wrestler whom no man could throw. She became ever richer by winning horses from defeated opponents, and eventually her herd of ten thousand rivaled the herds of the emperor.

Among the Mongols, athletic victory carried a strongly sacred essence, and the champion was considered to be blessed by the spirits. Therefore, Khutulun’s athletic triumphs made her the ideal companion for her father in battle. Her presence, mounted next to him on the battlefield, extended her reputation for past athletic victories into an implied guarantee of dominance on the battlefield. Throughout their lives the two constantly defied the efforts of Khubilai Khan to rule over the tribes of the steppes of western Mongolia and Kazakhstan and over the mountainous regions of western China and Kyrgyzstan. They resisted every army sent against them and kept their homeland permanent free of rule by his Yuan Dynasty.

Khutulun followed an unorthodox method of confronting the enemy. She rode to the battlefield at her father’s side, but when she perceived the right moment, in the words of Marco Polo, she would “make a dash at the host of the enemy, and seize some man thereout, as deftly as a hawk pounces on a bird, and carry him to her father; and this she did many a time.” While such deeds of individual bravado held little strategic value, they certainly provoked discord and even panic in the enemy while enhancing her reputation as divinely inspired and blessed.

Khutulun was unusual, but not unique. Mongol women rode horses as skillfully as men, often carried a bow and wore a quiver, and they repeatedly appeared in early reports as fighting alongside men. The ability of women to fight successfully in steppe society when they failed to do so in most sedentary civilizations derived, however, from the unique confluence of the horse with the bow and arrow. In armies that relied on infantry and heavy weapons such as swords, lances, pikes, or clubs, men enjoyed major physical advantages over women.

Mounted on a horse and armed with a bow and arrows, a trained woman could hold her own against men in battle. Women fared better in combat based on firepower than in hand-to-hand combat. Although archery requires strength, muscular training and discipline prove to be more important than brute force. An archer, no matter how strong, can never substitute mere might for skill in shooting. By contrast, good swordsmanship requires training and practice, but a sufficiently strong person wielding a sword can inflict lethal damage without prior experience. Mongols, like their relatives the Huns and Turks, relied almost exclusively on the bow and arrow in warfare.

Because archery depended so much on training, the ability of women to use arrows effectively in war depended upon their developing their skills as young girls. In the pastoral tribes, both boys and girls needed to use the bow and arrow to protect their herds. The boys would take the larger animals, such as camels and cows, farther away to graze, while girls stayed closer to home with the sheep and goats. Since wolves would more likely attack a sheep or goat than a camel or cow, the girls had to be able to defend their animals.

With her success in battle and in sports, Khutulun refused to marry unless a man could first defeat her in wrestling. Many men came forward to try, but none succeeded. Her parents became anxious for her to marry. According to Marco Polo, a particularly desirable bachelor prince presented himself around 1280. Most opponents wagered ten horses, or at the most a hundred, to compete against her. This unnamed bachelor wagered a thousand horses, and Khutulun’s parents pleaded with her to take a fall and let him win.

An excited crowd gathered for the match. In the desire to please her parents Khutulun agreed to let the prince win. In the rush of competitive excitement as she stepped forward to face her rival, however, her filial resolve to please her parents melted. She grabbed her opponent by the arms, and found him to be more formidable than her usual challengers. He struggled against her, and they pushed this way and that, but she could not submit and allow herself to be thrown. The match continued for an agonizing long time with neither able to dominate. Finally, in a great surge of energy Khutlun threw him to the ground. She not only defeated but humiliated him, and he disappeared, leaving behind the additional thousand horses for her herd but having shattered her parents’ hopes of marrying her to a worthy suitor.

Khutulun’s colorful and unusual public life without a husband provoked much speculative gossip not only in her father’s kingdom, but also among chroniclers and envoys of the adjacent Muslim territories. Her political and military enemies who had not been able to defeat her on the battlefield alleged that she maintained an incestuous relationship with her father and thus would take no other man while he lived. Realizing the price her father paid for such malicious propaganda, Khutulun chose a man from among her father’s followers and married him without wrestling him. He was her husband, but he was the man of her choice. Even in submitting to marriage she remained undefeated as a wrestler.

Khutulun consistently outperformed her many brothers, on the wrestling field as well as the battlefield. While Qaidu Khan’s other children assisted him as best they could, he increasingly relied on Khutulun for advice as well as for political support. She was unmistakably his favorite child, and according to some accounts, he attempted to name her to be the next khan before his death in 1301.

Her brothers resisted. She may not have actually wanted to be monarch as much as to be the chief officer of the army. She placed her political support behind her brother Orus in return for a plan to make her commander over the military. The two maintained a loyal alliance for only a few years, and by 1306 Khutulun, about forty-five years old, was dead under unexplained circumstances that gave rise to stories of diabolic plots against her life.

Although mentioned in a variety of Muslim sources as well as in the accounts of Marco Polo, Khutulun almost disappeared into the fog of historic myth. Only by chance was the story of the wrestling princess resurrected in a twisted way in the eighteenth century. In 1710, while writing the first biography of Genghis Khan, the French scholar François Pétis de La Croix published a book of tales and fables combining various Asian literary themes. One of his longest and best stories derived from the history of Khutulun. In his adaptation, however, she bore the title Turandot, meaning “Turkish Daughter,” the nineteen-year-old daughter of Altoun Khan, the Mongol emperor of China. Instead of challenging her suitors in wrestling, Pétis de La Croix had her confront them with three riddles. In his more dramatic version, instead of wagering mere horses, the suitor had to forfeit his life if he failed to answer correctly.

Fifty years later, the popular Italian playwright Carlo Gozzi made her story into a drama of a “tigerish woman” of “unrelenting pride.” In a combined effort by two of the greatest literary talents of the era, Friedrich von Schiller translated the play into German as Turandot, Prinzessin von China, and Johann Wolfgang von Goethe directed it on the stage in Weimar in 1802.

More than a century later, Italian composer Giacomo Puccini was still working on his opera Turandot at the time of his death 1924. Unlike his other operatic heroine, Madame Butterfly who lived and died for the love of a man, Turandot rejected any man whom she deemed inferior to her. His opera became the most famous of the artistic variations of her life’s story.

How a culture treats the past often tells us more about the people doing the remembering than about the ones being remembered. In Western culture the tale of Khutulun became a story of a prideful woman finally conquered by love. The Mongols kept her in their memory as a great woman athlete and warrior whose achievements are still remembered today in the open vest and the victory dance of the warrior. Every time a wrestler dresses for a match and every time he dances in victory, they honor the achievements of the greatest female wrestler in Mongolian history. Both the wrestling rituals in Mongolia and the diva on the opera stage preserve two aspects of the life of one of history’s greatest female athletes.

Jack Weatherford is a professor of anthropology, emeritus, at Macalester College and the author of several books, including Native Roots: How the Indians Enriched America, The History of Money, and Genghis Khan and the Making of the Modern World.