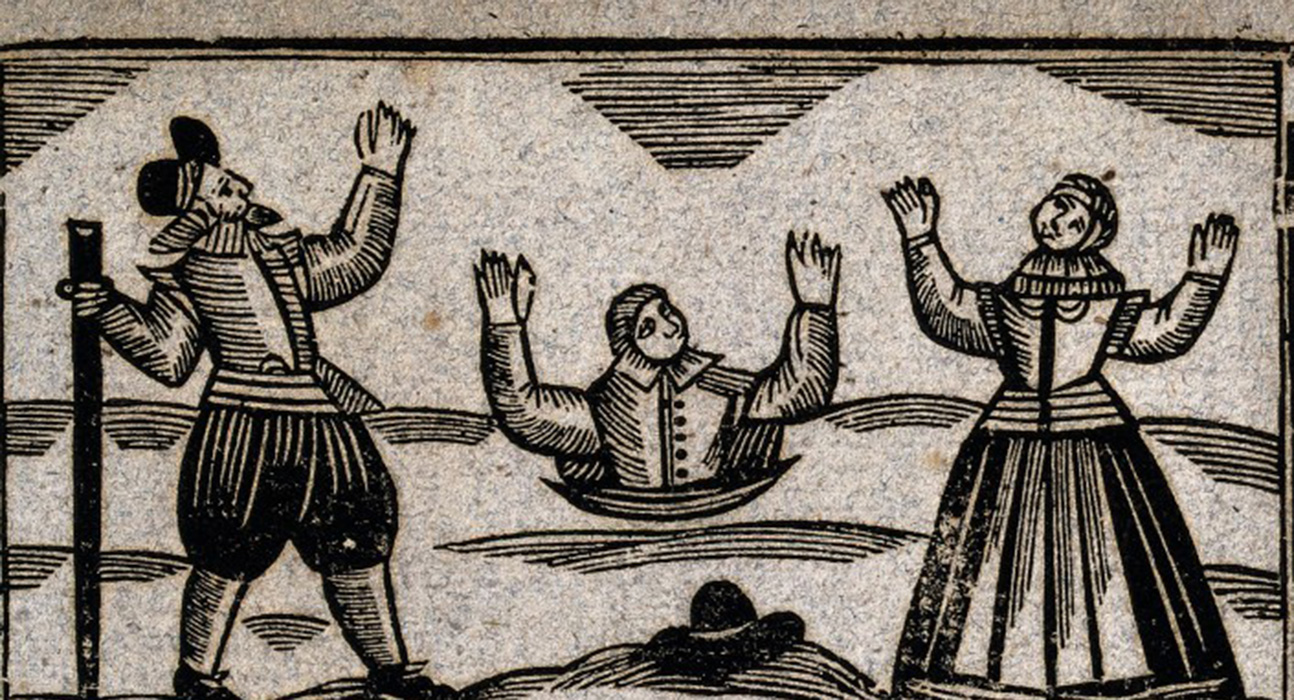 Woodcut depicting the “sink or float” method of uncovering a witch, 1720. Wellcome Library.

• How the rise of woodcutting in the sixteenth century continues to shape our image of the witch: “One of the earliest and most notorious British witchcraft pamphlets was published in 1579: A Rehearsall both Straung and True, of Hainous and Horrible Actes Committed by Elizabeth Stile, alias Rockingham, Mother Dutten, Mother Deuell, Mother Margaret, Fower Notorious Witches. Stile was a 65-year-old widow and beggar accused of bewitching an innkeeper. The pamphlet describes her association with three other old women known as Mother Margaret, Mother Dutten and Mother Devell, as well as a man named Father Rosimunde, who could transform himself ‘into the shape and likenesse of any beaste whatsoever he will.’ Woodcuts show these old women and several animal familiars, which they reportedly fed on their own blood.” (Public Domain Review)

• Two hundred years after her death, Jane Austen remains elusive to even the most devoted scholars: “We know that one of Jane’s aunts was accused of stealing lace from a shop in Bath and that one of her cousins died in a carriage accident. We know that her sister’s fiancé died of yellow fever and that her great-great-uncle was the Duke of Chandos. All of Jane’s modern biographers repeat these facts, just as they reproduce the portraits of her brothers and her aunts and her cousin and the men who might (or, more probably, might not) have wanted to marry her, and the confused, contradictory opinions of people who barely knew her, in the belief that somehow, by combining together every scrap, something will take shape—an outline, a silhouette, a Jane-shaped space. But in spite of all their efforts, Jane remains only a slight figure vanishing into the background, her face turned away—as it is in the only finished portrait we have of her.” (Literary Hub)

• The descendants of Emily Post on keeping etiquette alive in our badly behaved modern world. (Slate)

• Pirates are combing the seafloor for valuable (and sometimes historic) shipwrecks. (Outside)

• Dr. John Wilkins plans a trip to the moon in the seventeenth century: “Wilkins debuted his theories of how the moon and its possible present and future inhabitants could interact in his 1638 book Discovery of a New World; or, A Discourse tending to Prove that ’tis probable there may be another habitable World in the Moon. Science historian Dr. Allen Chapman wrote that he might have been trying to gain funding to test his ideas from this literature, which reads a little bit like a proposal to investors. In his writings, Wilkins describes an open, wheeled chariot with a vertical rotating sail sprouting from the backrest. If this chariot could lift a few men, they could pop on over to the Moon, where they would glide to a land on the same wheels that gave them their running, earthly start.” (Atlas Obscura)