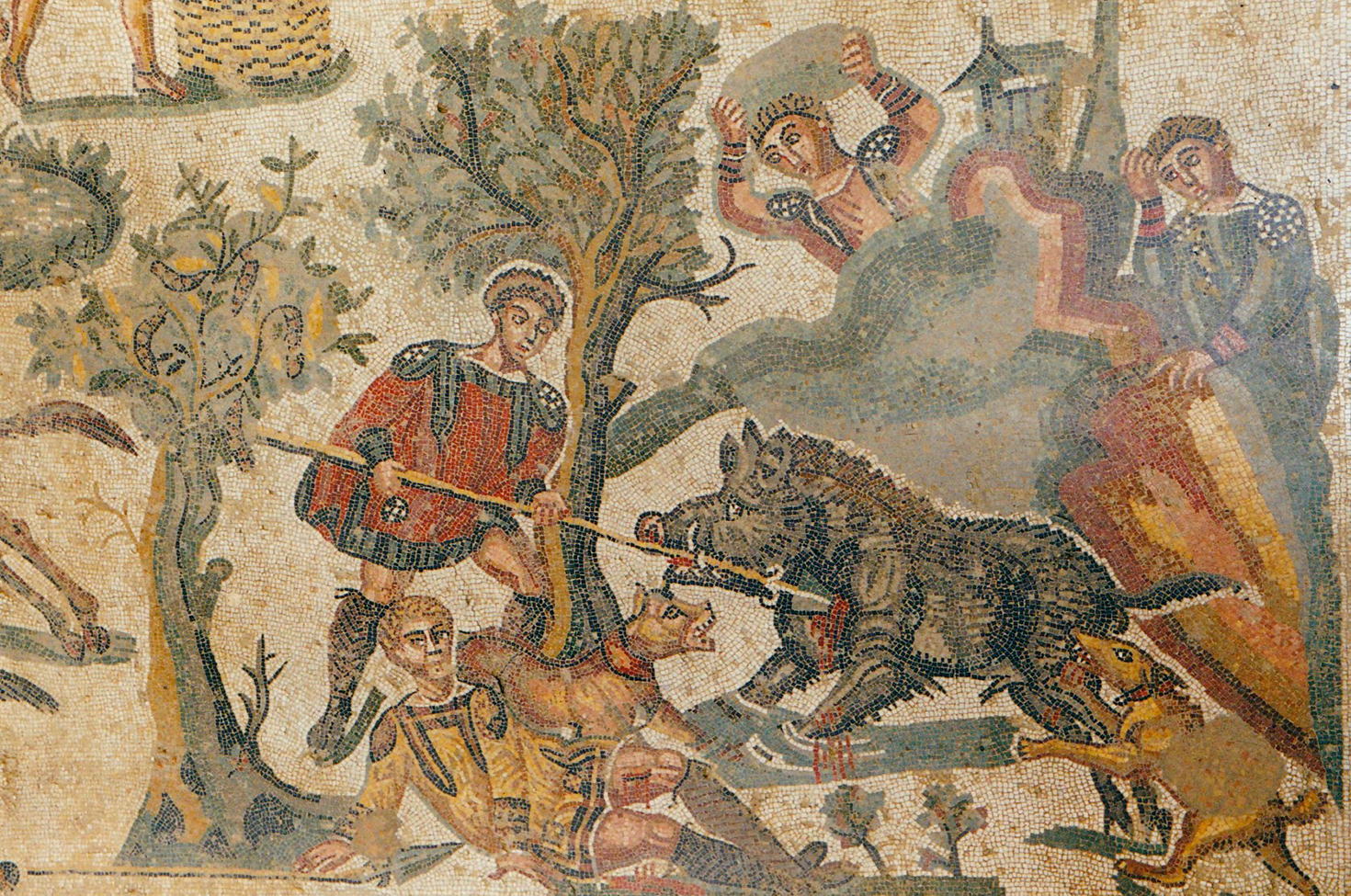 Mosaic of a boar hunt from the Villa del Casale at Piazza Armerina in Sicily, fourth century. Photograph by Laur Phil. Flickr (CC BY 2.0).

“Three deaths are better than life,” an Old Irish riddle runs: “the death of a salmon, the death of a fat pig, the death of a robber.” Of these three deaths, the fat pigs fell the most frequently: across the early medieval West, they were ubiquitous. Pigs were the consummate meat of the early Middle Ages. Horses and oxen have pulling power, cows and goats and sheep make milk and manure (and skin for parchment and packaging), sheep grow wool, and poultry lay eggs. But domesticated pigs were only destined to be butchered. It took them less than two years to reach their maximum weight, so efficient were they in converting whatever they found or were fed into meat. The osteoarchaeological record shows that farmers slaughtered almost all their pigs before they reached their third birthday, and many of them much earlier, with the exception of breeding sows and stud boars.

But pork was not the meat that everyone ate most. That distinction generally went either to beef or to mutton. Some people did not keep pigs at all: Greenlanders, for instance, and Jews and Muslims, as far as we can tell. There were also some Christians who did not own pigs—or at least, there were Christians who drew up wills that listed their livestock but did not mention any pigs. But because pigs were only ever raised for their flesh, they were a kind of metonym for meat more generally. Pork inspired rhapsodies, and even miracles; in Saint Brigit’s Ireland, tree bark was turned not into fishes and loaves but bacon in order to feed a crowd. And when the scholar al-Jāḥiẓ wrote a massive collection about animals at the Abbasid court in Baghdad, he had plenty of faults to find with pigs, both as a Muslim and as a naturalist. But he had also heard so many paeans to pork that he was fascinated by what it might taste like.

Even the Christians who loved to eat pigs vilified them as greedy, dirty, destructive animals. This reputation was woven into the scriptures that early medieval readers studied and quoted and wove into their own stories and texts. In the Synoptic Gospels’ account of the exorcism of Legion the demons were driven into pigs—not chickens or sheep or fish. Elsewhere in the Bible, the Prodigal Son hits rock bottom when, after spending his way through his inheritance, he is forced to take employment as a swineherd and eat what his pigs eat (Luke 15:11–32). In 2 Peter 2:22, building on one of the Proverbs (26:11), heretics are described as dogs who return to their vomit, and as clean pigs who turn right back to the mud. And the Gospel of Matthew (7:6) captures the concept of squandered resources with the image of casting pearls before swine. Augustine winked at this passage in his infamous story in the Confessions about stealing pears as a boy in North Africa—his second delinquent act was to waste what he had stolen by tossing most of his haul to a herd of pigs. 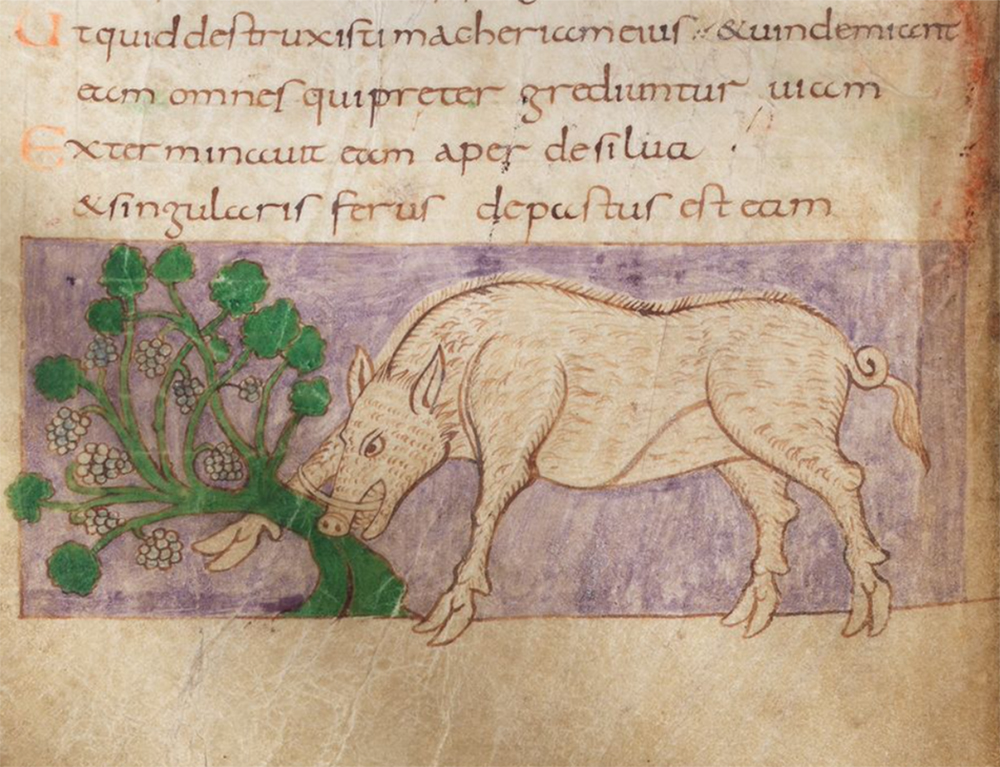 The pig makes what is probably its most prominent appearance in the Judeo-Christian tradition in Psalm 80 in the Hebrew Bible (Psalm 79 in the Septuagint and Vulgate). In this psalm, the people of Israel ask God to show them favor again because they believe he has turned away from them. They compare themselves to a great vine that he has transplanted from Egypt. He has cleared the soil for them by removing other peoples from it, and the vine has grown so large and strong that it has come to cast shadows on the mountains and the great cedars, and it stretches from the river to the sea. But now, the Israelites lament, the vast vineyard is under siege. God has knocked down the wall that protected it, and its grapes are being harvested by passersby. Insects are swarming it. And the boar of the forest is destroying and devouring it. In Hebrew only the animal itself is mentioned—hazir mi-ya’ar—but in Greek and Latin, the boar gets an additional epithet: it is not only the aper de silva but also the singularis ferus, the singular beast.

These are ancient texts, but the pig’s characterization as a ravenous and dirty animal has transcended particular historical moments. Christians in early medieval Europe made the same associations, and so do we. More than one historian has pointed this out over the years, partly with the goal of rehabilitating the animals’ reputation. But this flat stereotype, this singular beast, was not the only profile a pig could have, even in the past: “premodern” views were subtler than the shorthand symbolism suggests. In late antiquity and the early Middle Ages, farmers, policy makers, and philosophers were perfectly capable of holding multiple views of pigs simultaneously, of playing into a familiar caricature but also of honing in on the complexities of the species. They saw that pigs were not merely commodities that provided humans with meat or symbols that worked as handy metaphors. They were also creatures that were capable of adapting to and altering their environments, including the human environments that only partially constrained them. Pigs were difficult to fully domesticate, both physically and conceptually. They called attention to themselves and required some engagement with their complex lives.

Pigs were not the only domesticated mammal to have wild counterparts roaming the early medieval landscape. The aurochs, a species of wild cattle, could be found in Europe until the seventeenth century (although it has left only trace signs on early medieval sites). In North Africa, both aurochs and Barbary sheep were eaten alongside their domesticated relatives. But for many people, the wild boar was far more captivating. This was because across Eurasia throughout antiquity and for most of the Middle Ages poets and hunters celebrated the wild boar as a premier big-game animal. They admired and feared it for its strength and fury. Boars could easily kill men; more than one medieval king died trying to hunt them. And even the men who killed their boars usually sustained some kind of injury in the close combat that the final kill required. Only in the fourteenth century would the deer surpass the boar as the favorite aristocratic game in Europe. 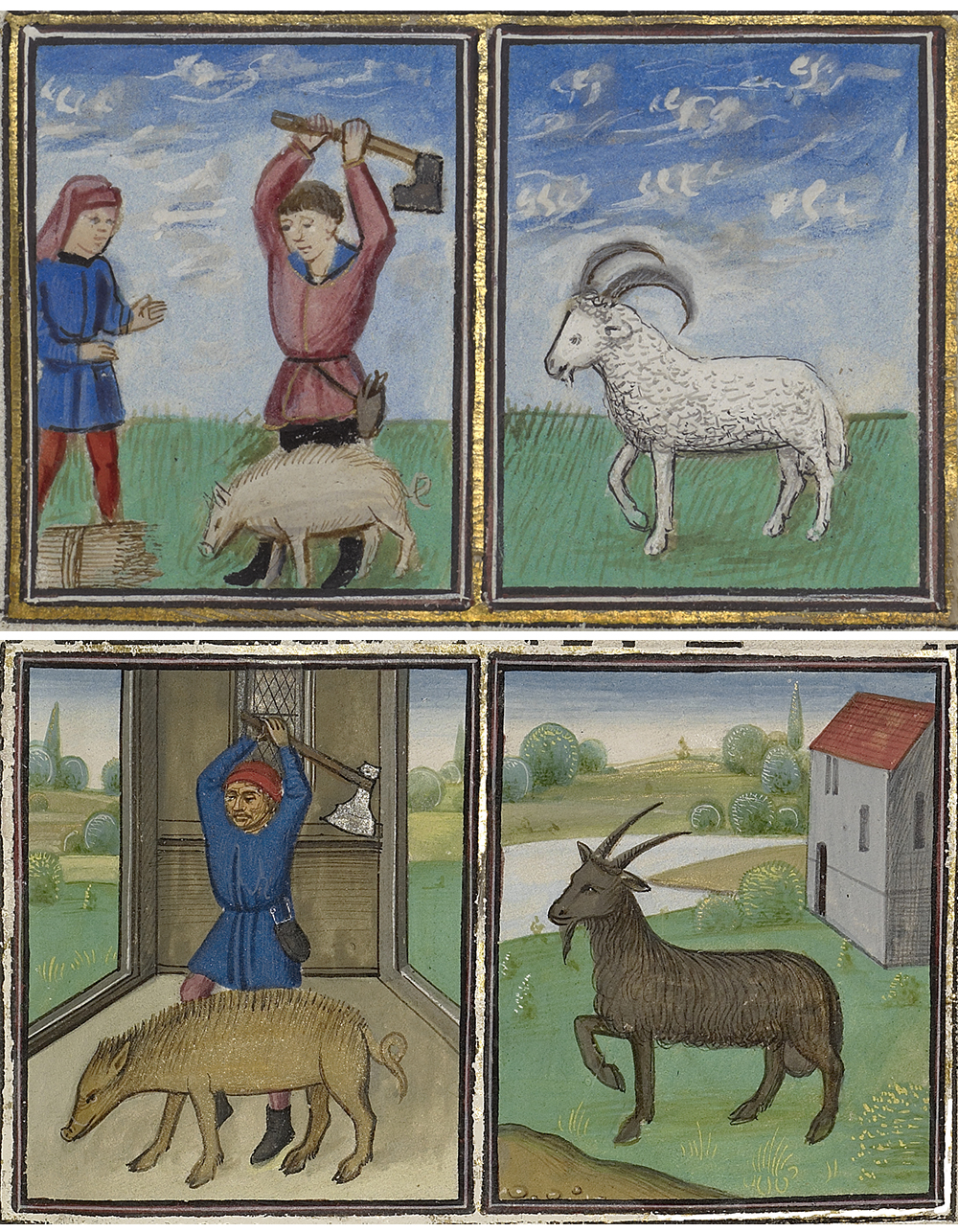 As a result, wild boars were asymmetrically gendered in medieval culture. People obviously knew that there were wild pigs of both sexes, but the subspecies as a whole was always thought of as masculine: the animals were boars, never sows. The Latin terms that writers used also tended to conflate species and gender in this way. Their terms for wild boar (aper) and the domesticated male pig (verres) were sometimes used interchangeably. So were the terms for domesticated pig (porcus) and sow (sus). But nobody ever called a wild pig a sow. Because of its masculine overtones, the Germanic name element *ebur-, “Boar,” was seen to be a respectable one to bestow on a boy, from tenant farmers to royal officials. Occasionally we meet an Ebretrudis, Ebrehildis, or Ebreverta—these were women’s names—but on the whole, *ebur- was much likelier to be attached to a man.

Class distinction was another force splitting wild and domesticated pigs from each other. Among medievalists it is fairly well known that wild boars were a favored insignia for military gear among so-called Germanic peoples in antiquity and the early Middle Ages (so-called because “Germanic” is an agglomeration of the non- or pre-Roman societies of northern and eastern Europe that flattens their engagement with Roman culture and also their differences from one another). But Romans celebrated the wild boar in the same spirit of martial elitism. The animal was the emblem of three legions (I Italica in Italy, X Fretensis in Jerusalem, XX Valeria Victrix in Pannonia and Illyricum, Germania, and finally Britain), and so it appeared on their equipment, too, not to mention their coinage and even their building materials. 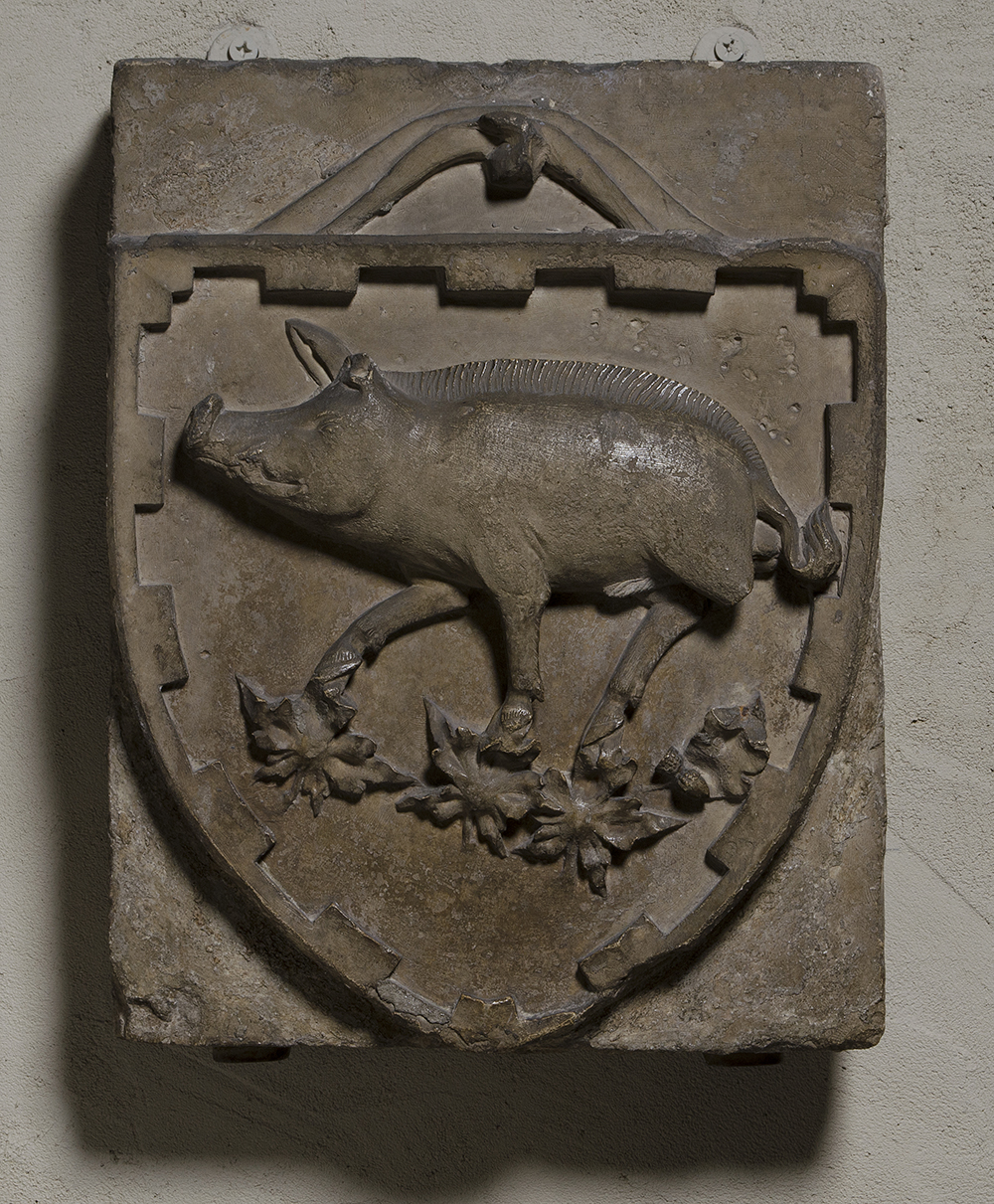 And when imperial aristocrats decorated their rural villas and urban homes in late antiquity, they so frequently commissioned mosaics depicting wild boar hunts that art historians have warned us not to take these as straightforward signs of actual hunting on the premises. Instead such scenes were strategically placed in receiving rooms as images of pure masculine power, or virtus. The hunters may even have been Christian figures: although the mosaics often incorporate themes from ancient mythology—which was part of the shared culture of the Mediterranean world—they were also compatible with a sense of Christian triumphalism over death. A similar idea was at play on Roman sarcophagi that featured boar hunts. The hunters’ courage spoke to the resolve of the occupants of the tombs, who were invariably men and boys. The more formidable the boar, the more admirable the hunter and patron, and so the boars on these pieces are colossal and savage: barreled bodies, enormous heads, glinting tusks. And unlike domesticated pigs, which are usually depicted with curly tails, these boars are usually shown with straight tails. So when the North African poet Luxorius spoke of a “wild boar of Mars” eating fodder from the hand of its master in the marbled rooms of a villa, both his Vandal and his Roman (and Roman-Vandal) audiences would have easily understood the message. This pig might act like an aristocrat, but it had gone soft.

Anyone was allowed to hunt wild boar in the early Middle Ages, and it is not unusual to find a few wild mammals, sometimes even wild boar, in settlements that were not populated by conspicuous consumers. But elites so greatly prized big-game animals that in the course of the Middle Ages, European governments, starting with the Merovingians in the seventh century, increasingly cordoned off specific tracts of woodland as “forests.” Doing so made them special legal spaces in which only kings and their friends could hunt—although this right was transferable to private landowners when rulers gave forests away as gifts, and sometimes elites tried to create their own private hunting parks by monopolizing woodlands for themselves. In the ninth century, the Carolingian court in Francia became fixated on hunting as both a metaphor and a proof-test for military and imperial exercise. In the process, forest rights became such a vital form of political legitimacy that Charles the Bald would restrict his own son’s access to key hunting grounds while Charles was away in Italy, to forestall the possibility of a usurpation. In the high Middle Ages the kings of England would eventually designate wild boars, regardless of their haunts, as off-limits to all but the court. There were probably not very many wild pigs around in England by the thirteenth century, when those laws were first issued. This is what the bone records suggest, at least: wild boars disappear from the animal remains on medieval settlements. Perhaps as far as the kings saw it, it would be unconscionable for the few that were left to end up in the hands of peasants.

Adapted from Legions of Pigs in the Early Medieval West. Copyright © 2020 by Jamie Kreiner. Used with permission of the publisher, Yale University Press. All rights reserved. Jamie Kreiner is an associate professor of history at the University of Georgia whose research focuses on the early Middle Ages. She is the author of Legions of Pigs in the Early Medieval West and The Social Life of Hagiography in the Merovingian Kingdom.