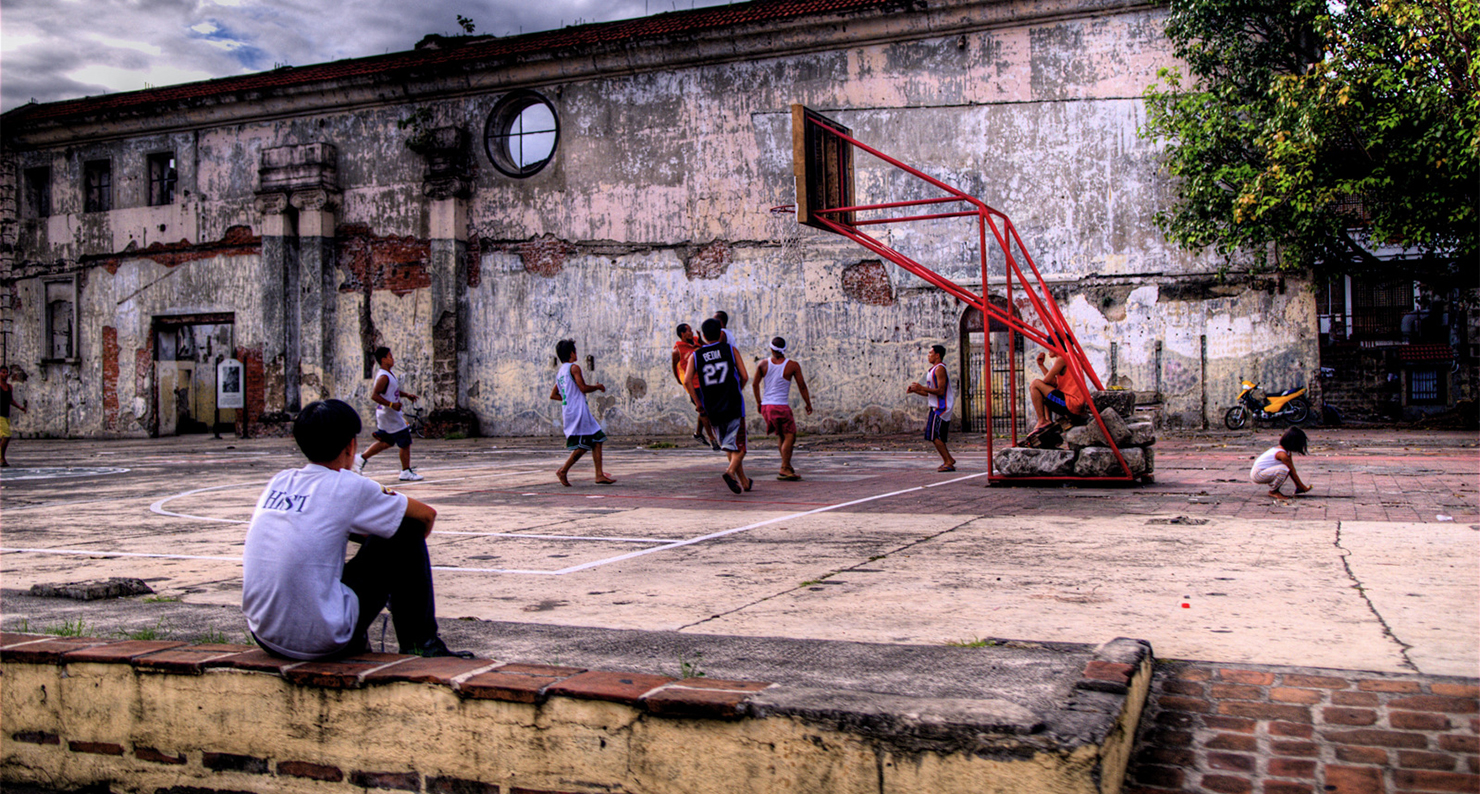 Rafe Bartholomew spent three years exploring the Philippines’ passion for basketball, highlights of which included monsoon-wracked research and at least one on-court screaming match. The result is Pacific Rims: Beermen Ballin’ in Flip-Flops and the Philippines’ Unlikely Love Affair with Basketball. LQ’s Brendan Carney Byrne sat down with him at an East Village café and discussed Filipino politics, graft, and a game in which corporate sponsorship is everything.

LQ: Why did you pick the Philippines?

RB: I was really interested that basketball had caught on in a country I knew very little about. At the time, I knew what most Americans who haven’t gone out of their way to study Filipino history know: that it used to be an American colony, something about the Spanish-American War, a little about the Marcos family, and general South-East Asian stereotypes—it’s hot, there’s corruption, prostitution, and some terrorism. I didn’t just think, hey these guys can play ball. Basketball means something different in this country. It’s part of everyone’s lives in a really deep way—they even incorporate basketball into Christmas processions.

LQ: One of the main themes of Pacific Rims, and your research in general, is the intersection of political power and basketball.

RB: The PBA (Philippine Basketball Association) started during the Marcos administration in the 1970s, which at the time had the country under martial law. The sport itself was introduced by the American military during the first half of the twentieth century. It was originally taught to girls for health purposes, while boys were encouraged to play more “manly” sports, like baseball. So it has a highly politically charged history. Robert Jaworski, an enormously popular player for Ginebra San Miguel, became a senator in 1998 when he was already in his early fifties, about twenty years out of his prime as a player. If he had been elected to the Senate earlier in life, his fans may not have wanted him to leave the game for politics.

RB: Well, that’s complicated. A local official probably doesn’t have direct control over something like clean water, electricity, or medicine, although he could try. You’ll find all over the Philippines that the basketball court is more state of the art than the clinic or the hospital. Part of this is because it’s cheaper to build—you get more bang for your political buck. But there’s the also the question of whether the choice is being made because of the budget, or if local officials are keeping some of the money for themselves.

LQ: Which brings us to graft, another mainstay of Filipino life and basketball.

RB: Filipino basketball fans expect and tolerate some hanky-panky. Wealthy teams ignore the salary cap pretty blatantly. This brings up a disparity between the types of teams you have playing. Some want to win at any cost. However, because Filipino basketball is all run by corporate sponsorship—with team names like the Rain or Shine Elasto Painters and the San Miguel Beermen—you have other teams for whom winning is not as vital. They’re funded by people who find it a prestigious association for their corporation, win or lose. If the Coca-Cola Tigers beat the Barako Energy Coffee Masters, the announcer still has to say “Barako Energy Coffee Masters.”

LQ: Alaska Aces, the PBA team you follow for part of the book, seem to come down somewhere in the middle on this. They’re certainly concerned about winning, but they don’t seem to be obsessed with it at all costs.

RB: You have to remember that Alaska’s corporate sponsor is a milk company; they have to appeal to middle class families whereas teams like the San Miguel Beermen don’t. They’ve got this type, this “street corner kid,” who are construction workers, guys who’re just hanging out, etc. They buy cheap tickets, scare the families. Because of the wholesome milk brand, Alaska's thing is more “winning with integrity,” while their rivals have a more “win at all costs” mentality.

LQ: Back to graft. There’s this time-honored tradition of players throwing tantrums on court after bad calls or severe cheating, and the fans rewarding them for it. Your theory seems to be that the Filipino players are acting out the fans’ frustrations with their political and economic situations.

RB: That’s a little projection on my part, but there are news reports that electricity prices are doubled in certain poor neighborhoods with no explanation—there’s water shortages, rationing, people on TV screaming, “Why are we getting fucked again?”

I once played a in a local game and got egregiously fouled, cut in the chin, but the ref wouldn’t call it. I went into a lunatic tirade, ripping off my blood-soaked chin-strap, throwing it on the court, and storming off. The crowd ate it up. My reading is that Filipinos see themselves getting cheated and cheated again in their daily lives and they can’t do anything about it. And then here’s this player who’s able to yell and scream and people listen to him. It’s cathartic.

LQ: Which leads us to another one of the book’s themes: American-style “professionalism” compared to localized Filipino passion. You say it’s as if the NBA or NFL planned practices around their fans’ schedules.

RB: It works there. I can understand why it doesn’t work in the US, and that certainly has something to do with the way our media functions. The Filipino sports media isn’t really antagonistic toward players, partially because journalists don’t make living wages, so they end up getting it from where they’re working. It’s called “envelopmental journalism,” where you get the envelope after the press conference.

LQ: So these are bribes? Who gives them out?

RB: I don’t know precisely who gives them out. I’ve seen them go out at events sponsored by the league, by individual teams, and I bet they even pass them around at press corps events. I don’t think they’re given out as bribes, exactly, because the money is being paid to buy a certain story. They are more like patronage gifts, the way political figures give out clothes and basketball paraphernalia to keep their constituents loyal. They are every bit as ethically compromising as bribes, but I don’t know that they’re exactly the same thing. The payments are like an honorarium or per diem for the sports writers, and in turn, the press corps views itself as more a part of the PBA family with more debt-of-gratitude ties to the league and its teams, rather than a group of watchdogs.

LQ: There’s also a difference in the fan-player relationship.

RB: In the Philippines, if you’re a fan, it’s a tradition to introduce the players to your children after the game and stuff like that. Jaworski was famous for that, staying around after the game to shake hands with, and talk to, every single fan who wants to talk to him. Here, no fan would ever ask for that. They think, “Of course we don’t deserve to talk to LeBron.” Maybe that’s why Filipino athletes seem like such interesting people, and why our athletes don’t. I’m sure they’re fascinating people, but they seem trained not to say anything interesting to us.

Brendan Carney Byrne’s fiction has appeared in Flurb; his nonfiction has been published in Strange Horizon, The Brooklyn Rail, and Rhizome. His novella The Showing of the Instruments was published in 2011 by Phone Booth Press. He is the editor of the webzine The Orphan.