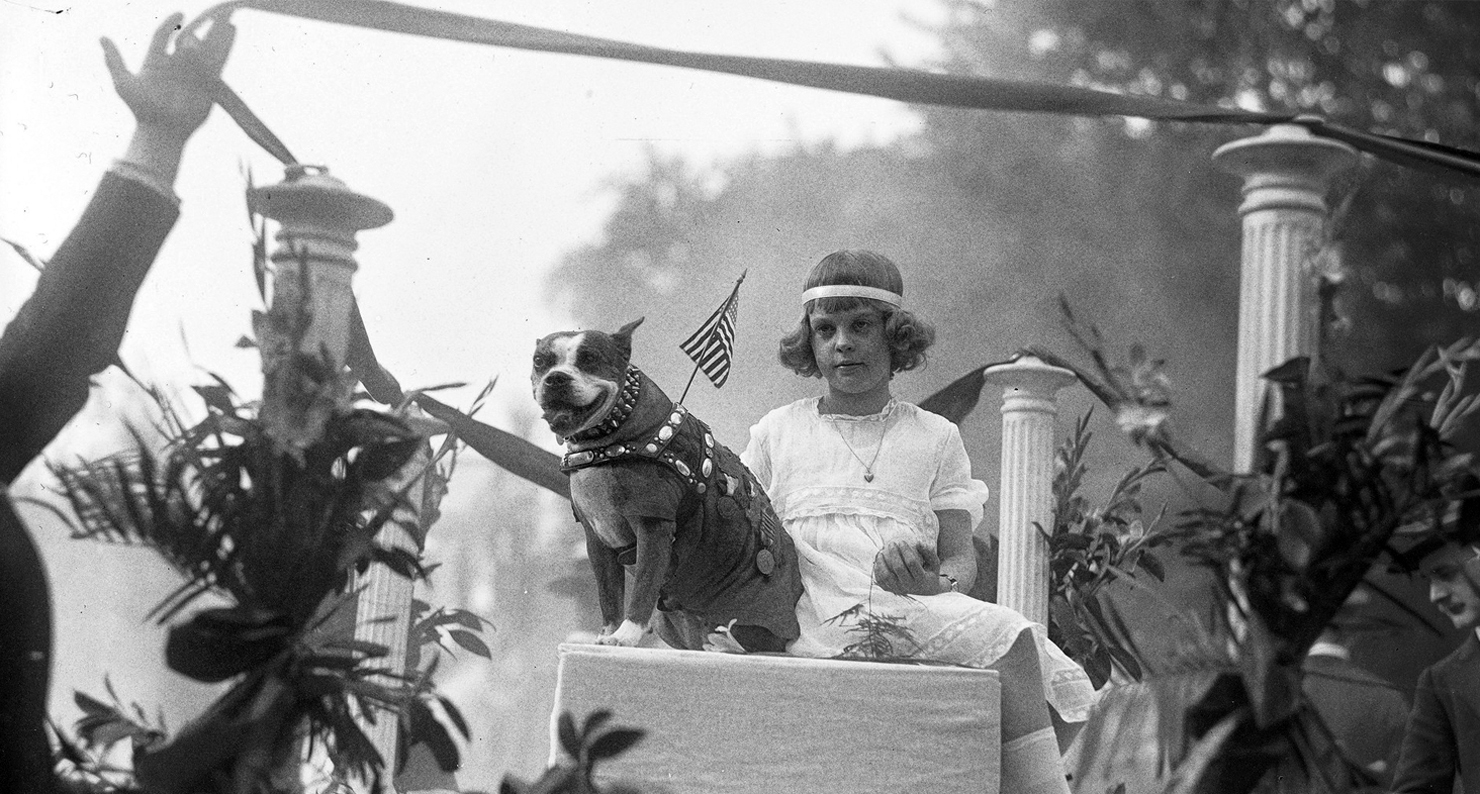 Sergeant Stubby shares a float with Miss Louise Johnson for an animal parade down Washington D.C.'s Pennsylvania Avenue in 1921. Library of Congress.

This spring, the United States Marine Corps welcomed a new recruit into its ranks. Although Private First Class Chesty XIV went through no formal training for the position (inherited from his father, Sgt. Chesty XIII) and skipped the lowest rank of private in order to get his new job, you can rest assured that the sleepy-eyed soldier who will spend at least another year growing into his saggy skin, will make his country proud.

Chesty is an English bulldog and like his father before him, he’s the new mascot of the U.S. Marine Corps. Even though PFC Chesty won’t see any time on the battlefield, he is part of a long and proud tradition of the American military’s use of dogs in battle and for pageantry. And while pictures of Chesty getting fitted for his uniform have gone viral on sites like Buzzfeed, he still has a long way to go if he wants to be known as the most famous military dog ever.

Nearly seventy miles northeast of Paris, there are over twenty cemeteries where the bodies of mostly unidentified German, British, and Italian soldiers are buried from the first World War. There is also Oise-Aisne American Cemetery and Memorial, the final resting place for over six thousand Americans that lost their lives during the Great War, many of whom fell upon the very ground where their last earthy remains lay during Third Battle of the Aisne. It was during that bloody battle that a stray dog became the most decorated canine in American military history.

Stubby was a pitbull mix, all big brown eyes and muscle. During training, before going “Over There” (as the popular song put it), Corporal Robert Conroy found the dog roaming around a Yale lot in New Haven, Connecticut that was being used as a makeshift army base. Conroy grew attached to the dog, and eventually his superiors made Stubby the mascot of the 102nd Infantry, 26th Yankee Division to help boost the morale of the troops. A quick learner, Stubby became familiar with the bugle calls, drills, and learned to put his right paw on his right eyebrow when his fellow soldiers gave a salute.

When it was finally time to ship off, Conroy smuggled the dog aboard the S.S Minnesota and kept him hidden until the ship was in the middle of the ocean, convincing his commanding officer to let the dog stay after Stubby showed off his saluting abilities. Once the soldiers made it to France, Stubby marched into battle with the doughboys, but soon found himself the victim of a German chlorine gas attack. Stubby was tough, though—he survived the attack and his already strong sense of smell became even more sensitive to even the smallest trace of gas. His new heightened abilities came in handy one morning when the Germans launched a gas attack directly at the sleeping quarters of American troops. Sensing the danger, Stubby went crazy, barking wildly, jumping on beds, and saving countless lives.

Stubby also helped locate wounded soldiers on the battlefield, and once single-handedly caught a German soldier in battle by attacking him and barking until American troops caught up with their fellow soldier. For capturing the enemy troop, Stubby was promoted to the rank of Sergeant, becoming the first dog to be given a rank by the United States military. Sgt. Stubby served his country in seventeen battles before he was relieved of combat duty while recovering from a grenade blast. By that time the pooch from New Haven was a celebrity who used his fame to cheer up other wounded soldiers as they recuperated. As soon as the war was over, Stubby was a featured guest in parades all across the country. He met President Wilson (and later Presidents Harding and Coolidge), was awarded over a dozen medals for his service, gaining membership in the American Legion.

Stubby retired from active service with his master, Corporal Conroy who survived the and went to study law at Georgetown University Law Center in 1921. Aware there was a celebrity dog on the campus, the school soon arranged a new position for the famous pooch: the mascot of the Georgetown Hoyas. Just like he had during the war, Stubby worked hard at his new position, entertaining the fans during the halftime of football games, and taking daily strolls across the campus where other former soldiers saluted the heroic pooch.

Stubby died in his master’s arms in 1926 at the age of ten or eleven. Gone but not forgotten, Stubby was stuffed and to this day he remains a part of the Smithsonian's permanent collection.

The dog that earned two stripes, a Purple Heart, several medals from adoring French fans, and the hearts of countless Americans for his bravery also has his name on a brick in the Liberty Monument for soldiers from the First World War that reads: "Sergeant Stubby, Hero Dog of WWI, A Brave Stray."

Jason Diamond is a writer who lives in Brooklyn. He is the founder of Vol. 1 Brooklyn and an associate editor at Men’s Journal.