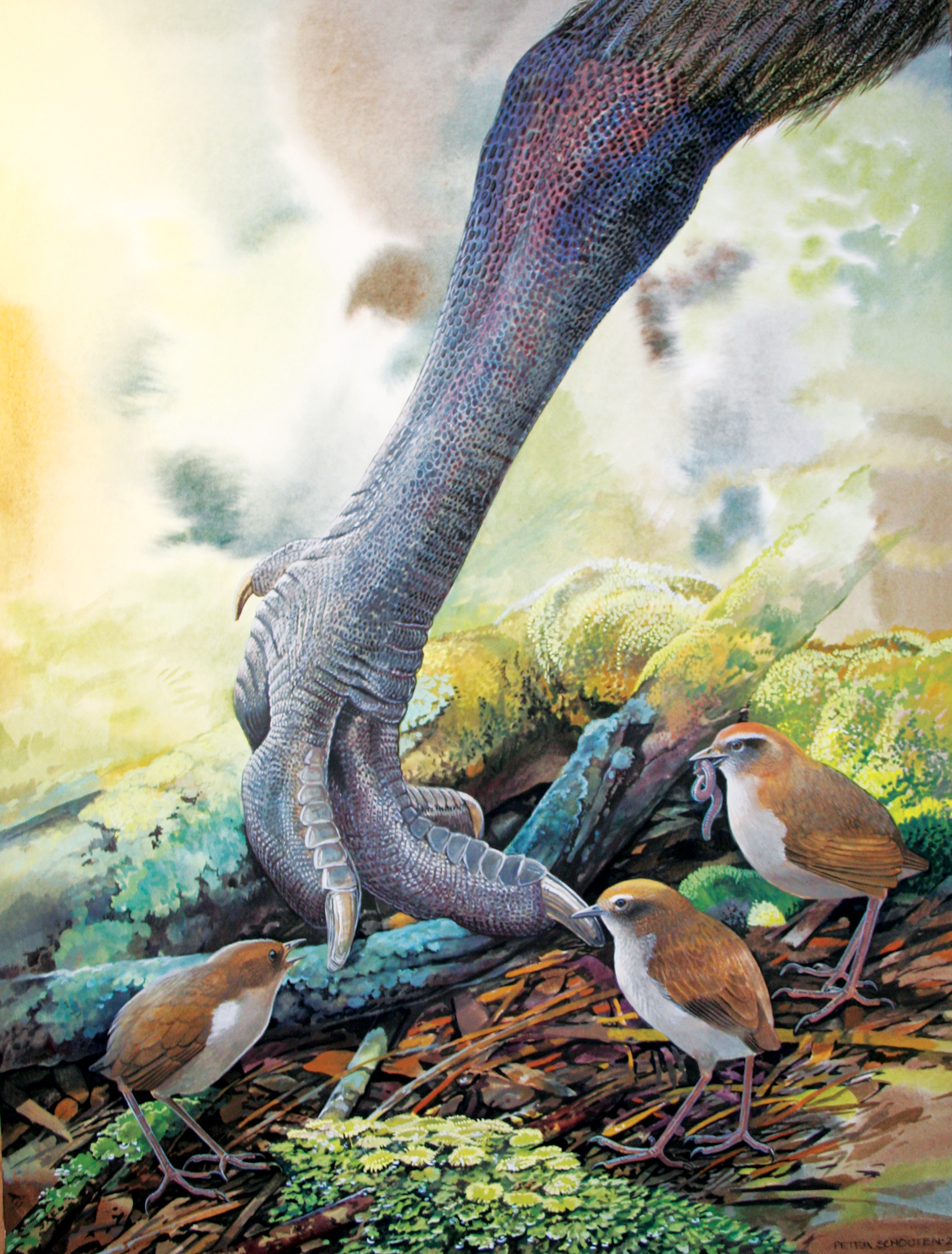 Great and small, moa and wren: this image encapsulates, as well as any single image can, what has happened to island species everywhere during the late Quaternary: whether they were large or small, most have disappeared. The small birds are native New Zealand wrens, Pachyplichas yaldwyni, while the giant foot striding over them belongs to a female Dinornis novaezelandiae, the largest of the moa. The wren, probably largely terrestrial despite its small size, weighed no more than a few grams; the moa may have weighed as much as 250 kilograms (550 pounds). Different species of wrens lived on the North and South Islands, and both seem to have survived into the Polynesian period. They may have eventually fallen victim to ecological change brought on by forest clearance, or perhaps its eggs were devoured by the gluttonous kiore rat, introduced by early Maori settlers. Illustration by Peter Schouten.

“Tameness” is a word with many shades of meaning. One set of meanings relates to the kind of behavior characteristic of domesticated animals that have been bred for thousands of years to respond reliably and tractably to humans, without aggressive or other unpleasant behaviors. In short, they’ve been genetically selected to express tameness, and we’re the ones who’ve done the selecting.

Another set of meanings refers to wild animals whose behavior has been modified through intensive training, as in the case of performing seals or lions in old-time circuses. Here, the individual animal has learned to satisfy its trainer by balancing a ball on its nose or by jumping through a fiery hoop, in return for which it receives food or other inducements. Unlike the situation with the much more highly selected domestic dog, genetically enabled to predict and react to human behavior in a wide range of contexts, there’s not much of an interspecies mind-meld going on with trained wild animals. It’s more a question of specific stimulus/narrow response, produced through constant repetition and reinforcement. Both the trainer and the trained learn how to behave in a stereotypic way to achieve a limited goal, without the trainer being eaten or the lion shot or otherwise abused in the process. Other factors may also be important, such as the ability of the trainer to take the alpha position in an implied dominance hierarchy. But unlike the case with domestic animals, programming tame behavior in a truly wild animal is due to learning: it is not facilitated by strong genetic predispositions developed through artificial selection.

There is, however, a third kind of relevant behavior in nondomestic animals. The hallmark is, once again, tameness, but in this case the behavior is not due to either individual learning or artificial selection. Instead, it is inherent, a by-product of a very different selective regime. In the literature it is often referred to as ecological or behavioral naivete, and it is intimately connected with island life. Indeed, as David Quammen remarks in his book The Song of the Dodo, almost all of the historical examples of inherent tameness concern island endemics reacting to humans with astonishing passivity, in situations that would, in normal circumstances, be perceived as being fraught with imminent danger. This kind of naivete is very relevant to the problem of understanding how innate behaviors may facilitate rather than prevent extinction. 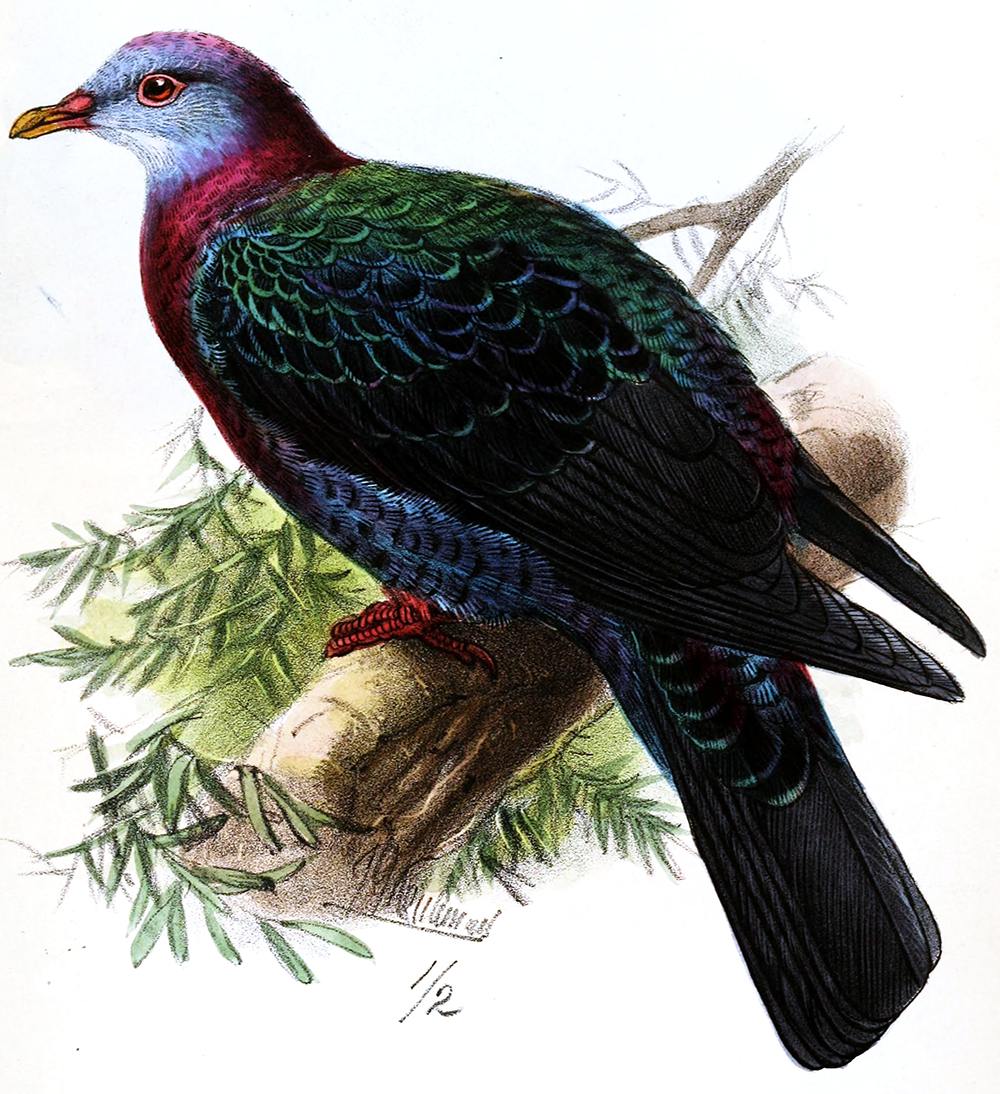 A particularly ghastly instance of ecological naivete concerns tiny Lord Howe Island (5.5 square miles or 14 square kilometers) situated off eastern Australia, which is said to have lost more species and subspecies of birds (at least fifteen) during the last five hundred years than Africa, Asia, and Europe combined. The island was first discovered in 1788 and visited occasionally thereafter—just enough to cause the demise of most of its bird life. The metallic pigeon, Columba vitiensis, a widespread species in the Pacific, was represented on Lord Howe by the now extinct subspecies C. v. godmanae. The bird’s behavior when confronted by humans was both heartbreaking and incomprehensible, as ornithologist Jean-Christophe Balouet relates:

[These] pigeons…were very plentiful and not afraid of man. Ships’ crews had no difficulty in catching them on branches because they did not fly away. Once they were captured their legs were broken, and the cries of suffering from these unfortunate birds then attracted all others in the neighborhood, so they too were then taken.

With regard to mammals, a similar and only slightly less brutal story can be told of the Falkland Islands fox or warrah, a native canid first encountered by Europeans in the late seventeenth century. The warrah’s scientific name, Dusicyon australis, means “foolish dog of the south,” an all too appropriate label. The warrah was still extant when Darwin visited the islands during the voyage of the Beagle in the early 1830s, although its numbers were much depleted because its fur was valuable. Darwin marveled at the warrah’s naive, trusting behavior:

These wolves are well known…[on] account of their tameness and curiosity; which the sailors, who ran into the water to avoid them, mistook for fierceness. To this day their manners remain the same. They have been observed to enter a tent, and actually pull some meat from beneath the head of a sleeping seaman. The Gauchos, also, have frequently killed them in the evening, by holding out a piece of meat in one hand, and in the other a knife ready to stick them…Within a very few years…in all probability this fox will be classed with the dodo, as an animal which has perished from the face of the earth. 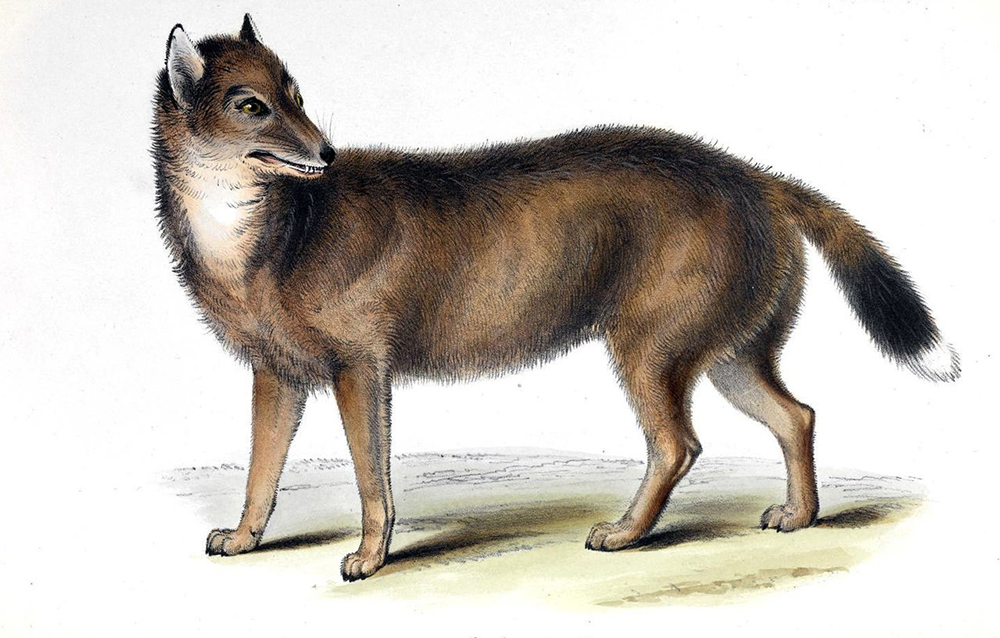 So what was going on with these island species that had rarely or never confronted humans before? Although most early modern-era reports are insufficiently detailed for any solid conclusions, it certainly looks as though island mammals and birds often failed to perform even the simplest avoidance maneuvers, such as just getting out of the way or hiding until the humans passed by. “Tameness” as a term does not begin to cover so disengaged a response to the unknown, let alone to an objective threat. Was this solely because these animals lacked any experience with predation or aggressive interactions over resources or territory? Or was it because their behavioral repertoires were so radically modified as a result of earlier, pervasive adaptations to island life that they had limited capacity to react to or learn from novel situations? Sadly, we will probably never know, although researchers are attempting to indirectly infer what might have happened, by looking for correlations in certain traits among quite different kinds of mammals.

For example, Marcelo Sánchez-Villagra of the University of Zurich and his colleagues have recently drawn attention to the “island syndrome,” a term that refers to distinctive morphological and behavioral features found in various combinations in island species, such as shortened limbs, reduced sexual dimorphism, early maturation, and tameness. Using a wide array of indicators, the Zurich team thinks that such bundles of correlated traits could arise from the fixation (selection) of certain mutations affecting early embryonic development. A key example concerns the coordinated migration of certain cells (called neural crest) from one part of the embryo to another, where they are switched on and differentiate into specific tissues such as pigment cells, smooth muscle, and cranial skeletal structures. Mutations that affect differentiation may in turn affect many systems as development continues, in what is known as a cascade. Even if affected individuals survive, in the normal case they would potentially have reduced fitness compared to other individuals in the same species. However, for populations in the process of adapting to island life, the normal case may no longer apply if the fitness rules have been changed. Paleontological evidence shows that features that might have led to seriously reduced fitness on mainlands, such as tiny body size in elephants, may prove highly favorable in the harsh, resource-poor environments characteristic of many islands.

What gives this idea its special significance is the fact that domesticated species express similar sets of traits that likewise have no obvious connection with one another, but can be traced back to early developmental errors. This is the “domestication syndrome,” which differs from the island syndrome in that the trait packages expressed in domesticants are due to artificial selection for attributes like early maturation and reduced aggressiveness. It is this remarkable symmetry between the consequences of natural and artificial selection that gives the island syndrome hypothesis its explanatory strength, although whether ecological naivete in island species and the tameness seen in domestic animals truly have a common source in developmental cascades needs further study. For the present, it provides a possible reason for why the warrah, Lord Howe pigeon, and dozens of other island species never “learned” to detect predation before it was too late: they may have been betrayed by the same selective mechanisms that enabled their successful adaptation to island life in the first place. 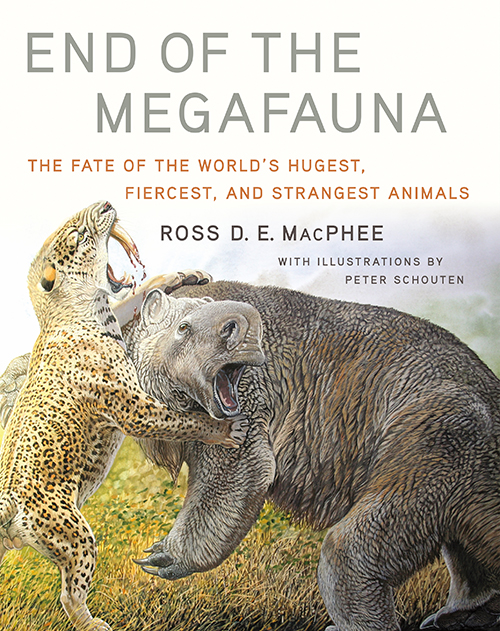 Ross D.E. MacPhee is a paleomammalogist with the American Museum of Natural History in New York City, where he has worked since 1988. He has conducted more than fifty expeditions in many parts of the world, including both polar regions. He is the author of End of the Megafauna: The Fate of the World’s Hugest, Fiercest, and Strangest Animals and Race to the End: Amundsen, Scott, and the Attainment of the South Pole, as well as numerous scientific papers, and he is the editor of Extinctions in Near Time: Causes, Contexts, and Consequences.