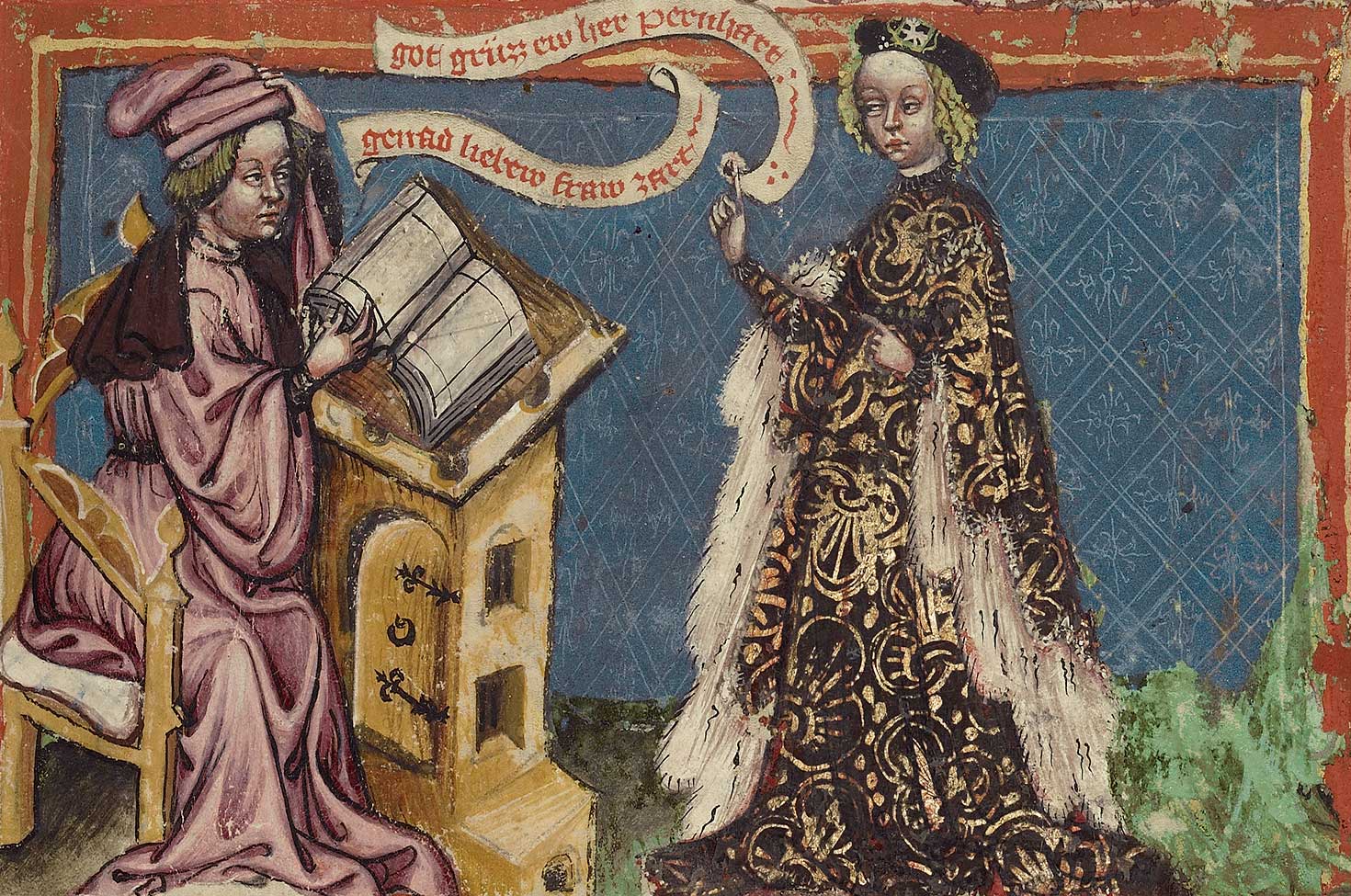 In his Institutiones, Cassiodorus (c. 485–c. 585) wrote that the work of scribes and illuminators is

a blessed purpose, a praiseworthy zeal, to preach to men with the hand, to set tongues free with one’s fingers and in silence to give mankind salvation and to fight with pen and ink against the unlawful snares of the devil. For Satan receives as many wounds as the scribe writes words of the Lord.

He thinks of the work of the scribe and the illuminator as sacred work but in a martial vein. Each of the scribe’s words harms the flesh of the devil. Geoffrey Chaucer wrote a wry injunction to his own scribe, Adam (sometimes identified as Adam Pinkhurst), some nine hundred years later. Chaucer—whose works include translations of Boethius’ Consolation of Philosophy and his own Troilus and Criseyde—berates Adam, threatening the curse of scabs on his head, should he not copy the work more correctly:

Adam scribe, if ever it falls to you
Boethius or Troilus to write anew
Under your long locks you must have the scale
Unless you make my words more true
So many a day I must your work renew
Correct it and also rub and scrape
And all that is from your negligence and haste.

What we have here are two contrasting visions of the work of the scribe. Cassiodorus was a Roman Christian. He wrote his Institutiones from the monastery he founded at Vivarium in the sixth century, and his texts were likely copied by fellow monks who saw their work as in the service of God. Chaucer was a fourteenth-century London-based bureaucrat and poet, and his texts were largely copied by professional scribes working in commercial workshops in and around Chancery (in London).

In whatever context they worked, when we—as readers, centuries later—encounter the works of these scribes, we have an intimate connection with the figures who shaped the words on the folios we see.

Many people assume that it was only men—particularly monks—who worked as scribes in the medieval period. But this popular assumption is wrong, on two levels: first, many manuscripts were written by secular figures, not monks, and second, many were written by women (and this always seems to surprise people). In around 732 Saint Boniface (c. 675–754), a Christian missionary in Germany, received a letter from a nun named Leoba. It was a kind of eighth-century cover letter. She requested that he pray for her parents, to whom he was related, and included a poem which she excused as “exercising little talents and needing your assistance.” Leoba added that she had learnt to write poetry “under the guidance of Eadburga,” likely the abbess of Thanet.

This makes Leoba the first named English female poet. Her letter is just one of a number of indications that early medieval English nuns could be highly learned—not just literate, and not just writing letters, but also composing poetry. Leoba’s letter was successful: later she joined Boniface in his missionary work in Germany and became abbess of Tauberbischofsheim. When she wrote the letter, however, she was part of the Benedictine double-monastery of Wimborne, in Dorset. Such an institution would probably have had a bustling scriptorium, perhaps even two of them—one for the male house and one for the female.

It’s likely that Leoba copied manuscripts there. Her work may have been prized both inside and outside the institution. The abbess Eadburga, whom Leoba mentions in her letter, was a scribe so skilled that Boniface wrote to her in about 735 to ask for a particular text: “I beg you further to add what you have done already by making a copy written in gold of the Epistles of my master, Saint Peter the Apostle, to impress honor and reverence for the sacred scriptures visibly upon the carnally minded to whom I preach.”

As Boniface’s request makes clear, the value of a manuscript was not only in the text it contained but also in the visual beauty of its folios. (Later, Eadburga received a gift of a silver stylus from Boniface’s successor, Lul, perhaps in recognition of her skill as a scribe.) It is striking that Boniface does not want just any copy of the Petrine Epistles but specifically requests Eadburga’s penwomanship. A manuscript was not simply a repository of text but an embodiment, in visual and physical form, of the sacral power of Scripture. Such an artifact could not be created by just anyone. 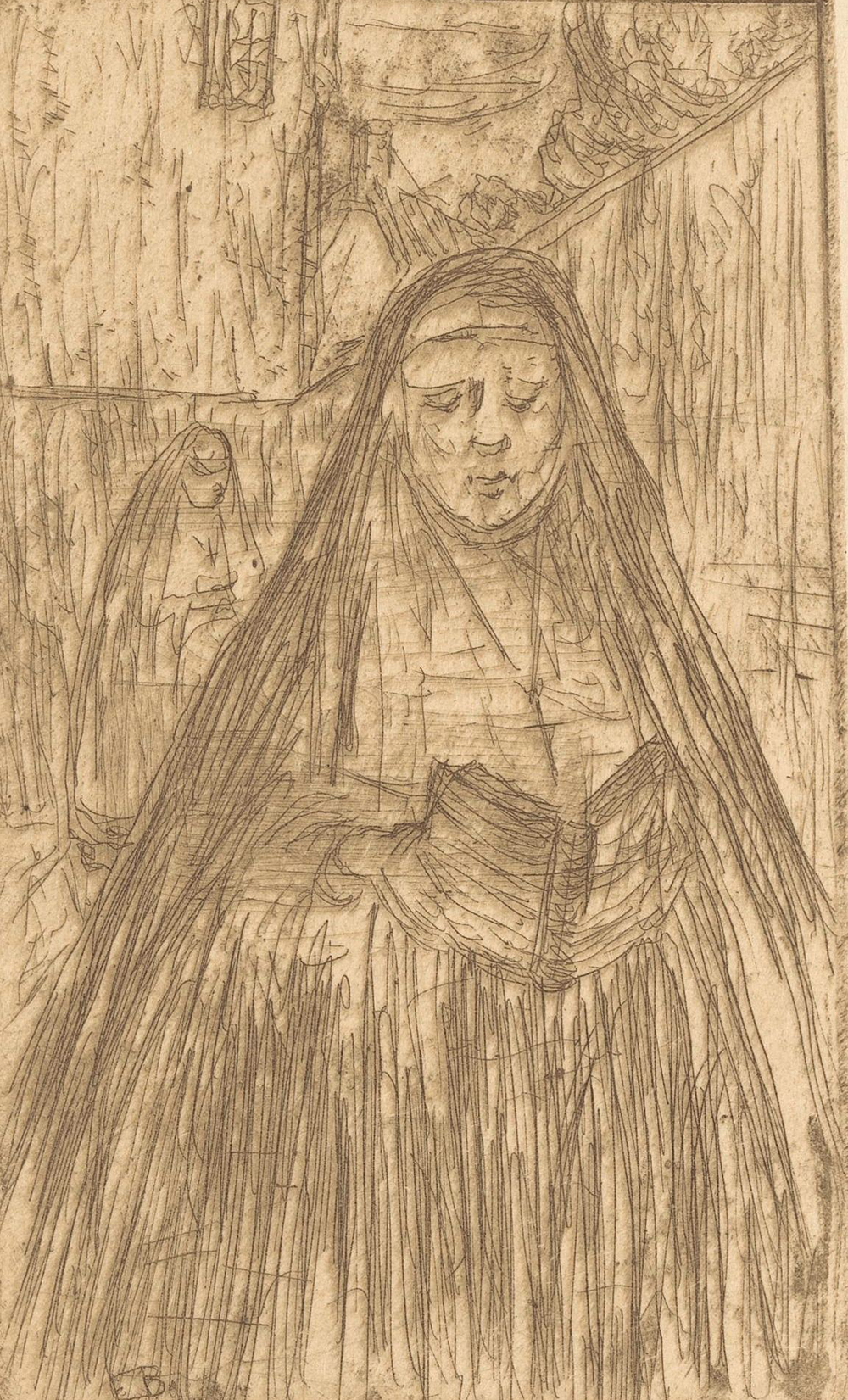 Tragically, Eadburga’s manuscript does not survive. As ever in manuscript study, patchy survival is a problem, and hunting for the work of female scribes is a challenging business. There is a larger body of evidence for the work of medieval female scribes on the Continent; most of the equivalent material in England perished in Viking raids, the Norman Conquest, and the Dissolution of the Monasteries. Moreover, because scribes, of whatever gender, did not often sign their work, it goes unattributed (although signatures became more common in the later medieval period). Female scribal hands are indistinguishable from male scribal hands. Particularly when the place of production for a medieval manuscript is uncertain, there is always the possibility that it is the work of an unidentified female scribe.

Sometimes, however, a manuscript will give us clues that it was made by a female copyist. The Book of Nunnaminster is one of these. Textually, it is made up of gospel extracts as well as a variety of prayers. There is a prayer against poison, for example. It also contains the oldest known copy of the “Lorica of Laidcenn,” an Irish “breastplate prayer” for protection of the body. This prayer requests blessings on a long list of body parts, over one hundred in all, including the skull, the tongue, the teeth, “hams,” and “spleen with winding intestines,” as well as the “joints, fat, and two hands.” The prayer’s anxious catalogue of body parts is a very human reminder of the terror of disease that its readers must have felt in a time before medical conditions were well understood and often could not be effectively treated.

The most intriguing aspect of the manuscript, however, is that it contains prayers in Latin with feminine word endings, suggesting it was made by or for a woman. The manuscript’s small size suggests that it was made for personal use—it could easily be held in one hand. The text was written by a single scribe in a clear round hand, and it is delicately decorated with soft color wash infills in some of the initials and dotting patterns around certain letters. Headings appear in red ink, and some letters have animal heads in an interlacing pattern that is characteristic of pre-Conquest English and Irish artwork.

The Book of Nunnaminster was probably created in the kingdom of Mercia (in the Midlands of England) in the late eighth or early ninth century, but by the tenth century it had made its way to the Benedictine abbey of St. Mary’s Nunnaminster in Winchester. At this time someone added further prayers with feminine endings. Tantalizingly, inscriptions were also added in Old English describing the boundaries of a plot of land donated to Nunnaminster by Ealhswith (d. 902), wife of Alfred the Great. This could be a clue that the book had originally belonged to Ealhswith, who was Nunnaminster’s founder. The evidence is only suggestive, but it fits with a larger picture we have of Alfred, his wife, and his children. Asser—Alfred’s biographer—describes Alfred’s children Ælfthryth and Edward the Elder as studious and bookish, mentioning that they read “the Psalms, and books in English, [and] especially English poems.” Asser describes Alfred himself being given a book of English poems by his mother. It would seem likely, therefore, that Ealhswith shared Alfred’s love of learning and promoted it to their children, as Alfred’s mother had to him. A bequest of a personal prayerbook to the convent she had founded would be in keeping with our picture of her.

The Book of Nunnaminster may suggest it had a partially female audience, provide suggestive clues to a female scribe, and hint at a female owner. But the evidence is frustratingly piecemeal. Very occasionally, however, a manuscript speaks to us in more unambiguous terms. Bodleian Library MS Bodl. 451, from the early twelfth century, contains an anonymous moral treatise, a collection of sermons, and a text on the monastic life called Diadema monachorum (The crown of monks) by Smaragdus of Saint-Mihiel. It was all written by a single scribe in Nunnaminster (St. Mary’s Abbey Winchester), which appears to have had a flourishing scriptorium in the early medieval period.

This scribe added a colophon at the end of the text that reads, Salva et incolomis maneat per secula scriptrix (Save the scribe, may she remain unharmed forever). The manuscript is written in a clear, neat hand with elegant “rustic capitals” and rubrication, meaning that the text would have been easy to navigate. It was a carefully produced volume, with tiny thread page markers— which acted as bookmarks—traces of which can still be seen.

Unlike the Book of Nunnaminster, it seems to have been used for public instruction rather than private devotion. The Diadema monachorum was intended to supplement the Benedictine Rule (the instructional manual that Benedictine monks and nuns lived by). Smaragdus, the author of the Diadema, suggests that one chapter of the text should be read aloud at each evening meal. There are drips of wax and wax stains in the manuscript, showing it was likely used for this very purpose. It would seem that the scribe came back to her work, decades after it was finished, to add a note at the start of the manuscript concerning the genealogy of St. Edburga—the granddaughter of Nunnaminster’s founder, Queen Eahlswith, who may have owned the Book of Nunnaminster. 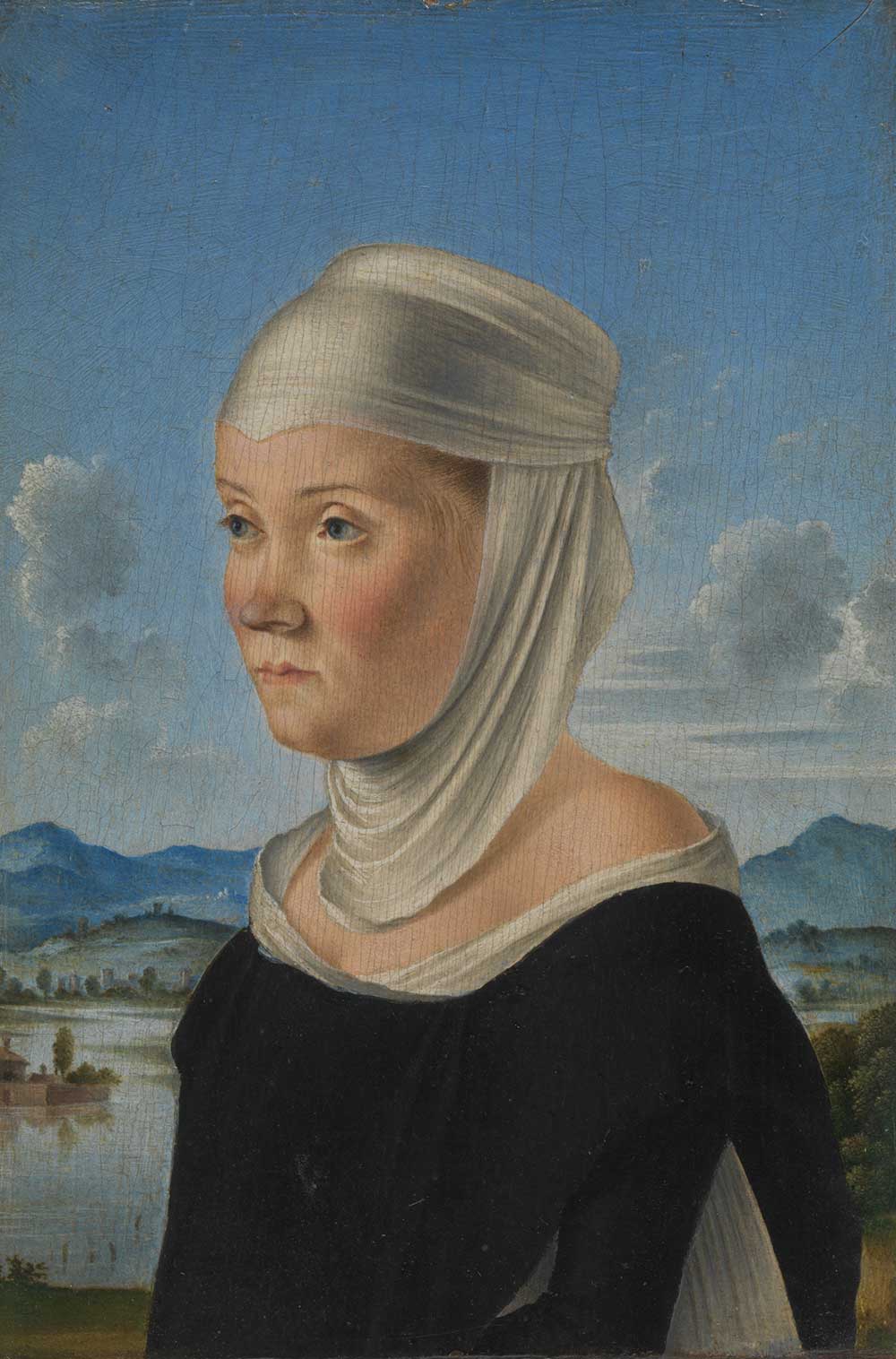 There is something compelling about her added note. It shows the book was retained by the abbey and likely read by generations of nuns. The manuscript appears to have been well cared for. When one of its leaves was lost or went missing, another scribe—probably another female scribe—replaced the leaf and copied the missing text in a hand approximately contemporary with the main hand. And the book went on being read and used for some time. Readers added forms of punctuation in the sermon collection to help them read the text aloud; one scribe added a portion of a now lost text describing a miracle associated with Saint Edburga. Later notes and pen trials from the thirteenth century testify to several generations of (most likely female) readers.

In the tiniest of details—in traces of thread, drips of wax, the three letters of a feminine word ending scriptrix (female scribe)—we can begin to glimpse a lost world of female scribes and readers. Both of the manuscripts—the Book of Nunnaminster and the collection of sermons—testify to female patrons and owners, reminding us that women were involved in the production of texts in many different ways. These manuscripts offer a corrective to the popular perception that medieval manuscripts were “all written by monks.” Our imagination of the past is delineated by patriachalism infused with prejudice. If we were wrong in imagining that all scribes were men, what else might we be wrong about? The past is, as ever, richer and more intriguing than we imagine. 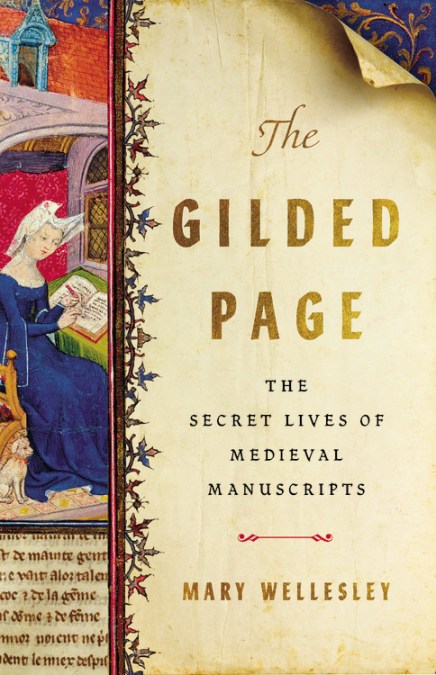 Mary Wellesley is a former research affiliate at the British Library, where she still teaches medieval language and literature. A frequent contributor to the London Review of Books, she completed her PhD at University College London. She is the author of The Gilded Page: The Secret Lives of Medieval Manuscripts.