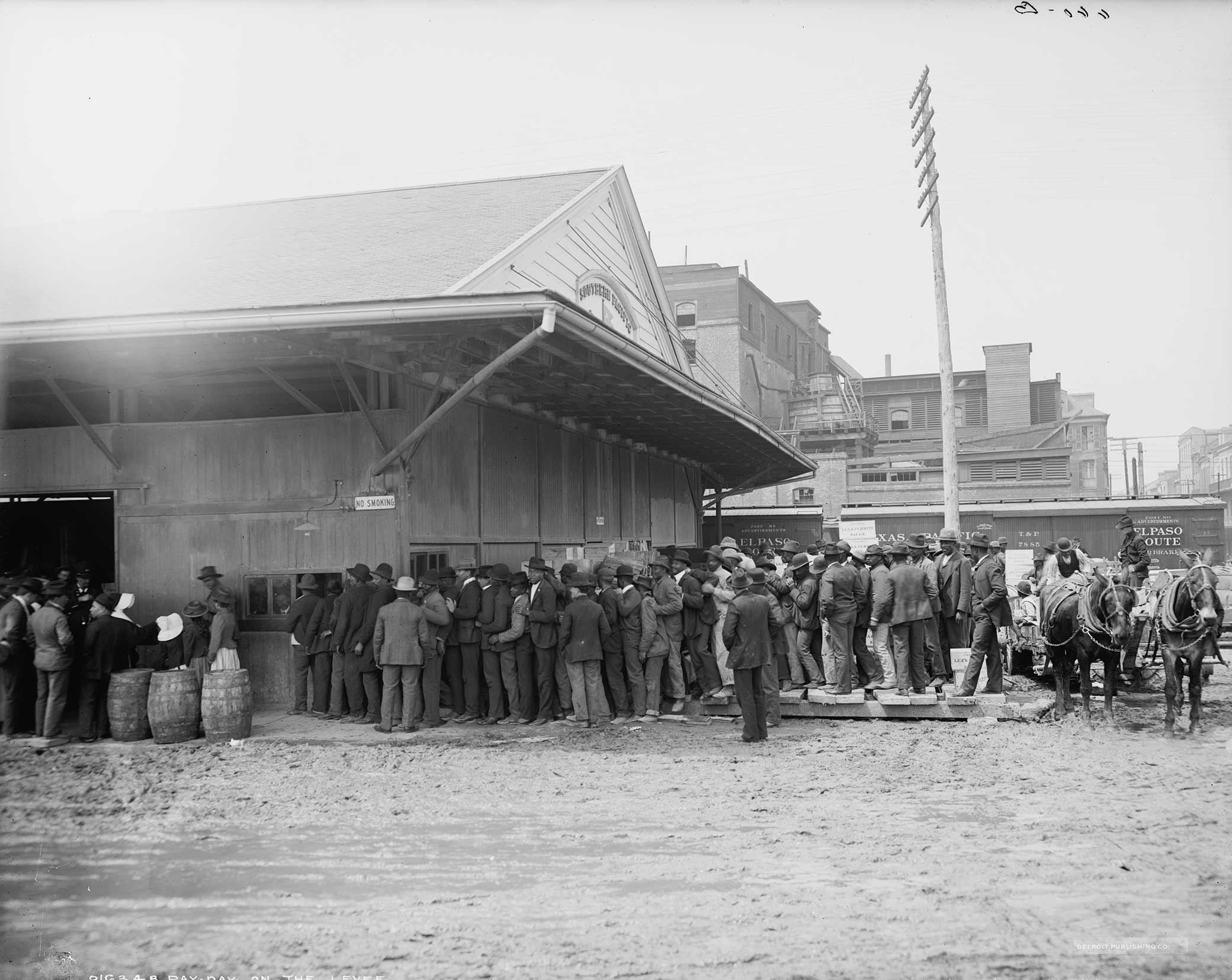 By the nineteenth century, Saturday evenings had long been distinctive in North America. In New England, sunset marked the beginning of Sabbath observance, especially before the early 1800s. But elsewhere, in both urban and rural areas, Americans took advantage of the next morning’s release from labor to stay out late, shop, drink, court, and socialize in groups—both indoors and, conditions permitting, under the stars. In this sense, Saturday night festivity was a conspicuous feature of the traditional working week well before the industrial era. What changed in the weekly calendar of nineteenth-century labor, however, was that Saturday became payday. In far greater proportions than in prior (or subsequent) periods, U.S. workers received cash wages on a weekly basis during the middle decades of the nineteenth century, and they typically received them on Saturdays. For those men and women, and for the people whom they supported, patronized, entertained, and encountered, the rituals of Saturday night—and the rhythms of the week that followed—were organized around weekly pay rather than just weekly rest.

Paying laborers every seven days was not a radical innovation; its periodicity was obviously suggested by the structure of the workweek, which began in principle (if not in fact) on Monday morning and ended sometime on Saturday. Before the nineteenth century, however, the question of when wages were paid was far less consequential, for the simple reason that relatively few people in North America actually worked for wages. Through the colonial period and beyond, most laborers were bound to patriarchal households—as enslaved workers, indentured servants, children, wives, long-term apprentices, or resident employees. But over the course of the early national period, many forms of bound labor disappeared in the North, while paternalistic arrangements under which urban workers received bed and board gave way to cash compensation. By the 1830s waged employment was a common form of labor discipline in northern cities. On a national scale, it was still spreading slowly. In 1800 only about 10 percent of the U.S. workforce was employed on a wage basis; as late as 1860 the proportion was still less than half, though in sheer numbers, wage earners surpassed the enslaved population in the United States by midcentury. But because wage work was concentrated in the North and West and in larger towns and cities, its social and economic impact in those places was far greater.

The hundreds of thousands of workers who earned wages at any given moment in the antebellum era were not all paid on the same schedule. They might receive their money daily, weekly, semimonthly, monthly, or in less regular installments, and it is difficult to determine the relative frequency of those arrangements in each region and occupation. Some patterns seem clear. Teachers, clerks, domestic servants, and mill workers, for example, were generally paid by the week. Casual labor was more often compensated by the day. Seasonal farm work might be paid by the month (plus board). But the general trend toward weekly pay is widely attested. Midcentury bookkeeping manuals, labor reports, and comments on wage work all routinely assumed weekly pay periods.

More specifically, commentators assumed that weekly wages were disbursed on Saturdays. An 1837 Democratic partisan paean to the dignity of labor in Natchez, Mississippi, asked, “Who pays the coin for all his debts on Saturday night? The mechanic.” An 1861 short story rhapsodized about “Saturday night! How the heart of the weary man rejoices, as, with his week’s wages in his pocket, he hies him home to gather his little ones around him.” From a more critical perspective, James McCabe’s sensational guide to New York City explained that the jails were usually full on Saturday nights, because “the working classes are paid their weekly wages on Saturday, and having no labor to perform on the Sabbath, take Saturday night for their periodical dissipation.” In his memoir, Ulysses S. Grant assumed that a similar pattern of dissipation would have prevailed in Catholic Mexico in 1848; he describes a visit to a village during the U.S. invasion on what “must have been a Saturday night,” because the local “peons had been paid off, and spent part of the night in gambling away their scanty week’s earnings.” By the end of the century, a national magazine (Godey’s) could assert with confidence that “it has been the custom from time immemorial to make Saturday the payday.” Over the course of the twentieth century, pay periods would lengthen in many industries and sectors, and payday would detach itself from the week, but in the nineteenth century, when wage labor first became standard, the association resonated.

Saturday paydays drew special attention as set pieces in the massive popular literature spawned by the antebellum temperance movement. “Every Saturday night,” a typical story recounted, “the father would demand the wages of heart- and brain-aching toil, and spend the money for rum with his companions of the Sabbath.” Another told of a father who managed to stay sober for three months only to come home intoxicated one evening. “When Saturday night came, he gave Kate but four dollars, instead of eight.” The daughter “received it without any remark upon the smallness of the sum, and he gave it to her without any reason for the diminution.” Later in the same best-selling story, the local tavern keeper plots the protagonist’s decline along the course of the week: “His appetite for liquor was so strong that his week’s earnings were usually all gone by Tuesday or Wednesday, and then I had to chalk up a score against him, to be paid off when Saturday night came.”

Temperance authors used the formula of steadily depleting funds over the course of a week to good effect: it dramatized the dissipation of character and bodily integrity. But the image of depletion was also rooted in a growing economic reality that implicated more than just drunkards and tavern keepers. Madelon Powers, in her history of the nineteenth-century saloon, captures the shape of this new reality: “The weekly cycle began spectacularly on paydays—Saturdays for many laborers—and then progressively declined until week’s end, when it began anew.” For wage workers, the week followed a pattern of spectacular beginnings and progressive declines, rather than a simple alternation between one day off and six days on.

It is difficult to track or even imagine all the ways in which a cycle of steady, progressive depletion of funds shaped Americans’ experiences of labor and leisure in towns and cities at the moment when this cycle first took root. The reverberations were undoubtedly broad. For starters, the combination of weekly reckonings and diminishing resources could be felt in the workplace. It may well have induced workers to accept more overtime work (when the choice was theirs) later in the week, which might have contributed to the weekly rise in textile output after Thursday. Labor records from a Massachusetts mill in the early 1850s show a decided spike in overtime pay at the end of a week, and especially on Saturdays. But the weekly pay system had an even greater impact beyond the walls of the workshop and the factory, in the proliferating commercial venues where wage earners spent their money.

Because one of the defining features of the wage system was severing the provision of lodging from the process of organizing and disciplining labor, boardinghouses mushroomed in industrializing cities, drawing portions of the money that workers now received in lieu of housing. Not surprisingly, boardinghouse rhythms echoed those of wages. Rooms were rented by the week in most establishments, and those exceptional boardinghouses that sought market advantages by offering daily or monthly rates made a point of it in their advertising. Guests could start their stay midweek and typically lodged for longer periods, so the passing of a week did not necessarily trigger wholesale turnover in the boardinghouse. But Saturday was still the day for settling accounts.

The other related urban business that followed the weekly pay period was pawning, which provided wage earners with their largest source of liquidity—other than wages themselves. Pawnshops in nineteenth-century cities, as historian Wendy Woloson has demonstrated, depended less on the occasional desperation of the improvident than the regular rhythms of need and access to cash among ordinary working people. Not surprisingly, those rhythms were hebdomadal. Pawnshop traffic intensified at week’s end, in part because boardinghouse rent was often due on Saturdays, but also because of when workers got paid and when they needed the objects that could otherwise be liquidated. Sunday clothing would be pawned on Monday morning and then redeemed on Saturday once wages had been paid. In fact, despite the fact that rent was often due on Saturdays, that day was more typically a day for repaying than drawing loans. It was the most common day for redeeming a pledge in pawnshops, despite the fact that establishments owned by Jewish brokers (who had learned the trade in Christian Europe, where usury exemptions and economic and occupational restrictions had pushed Jews into lending and brokering trades) often did not open until sundown. John Simpson, one of New York’s many gentile pawnbrokers, recorded more than 27,000 transactions in his ledger over a seven-month period in 1838–39. He was busy throughout the week, except on Sunday when the shop closed, but Saturday consistently drew the most transactions of any day throughout the ledger. Overall, the closest competition came from Monday, which followed a day off and marked the moment when Sunday clothes became expendable, and Friday, a day when funds were at their lowest (encouraging pawns) while the need for pawned clothes was fast approaching (encouraging redemptions). Simpson’s busy Saturdays were partially a consequence of limited competition before sundown, but the larger pattern reflected the financial calendar of urban wage earners.

Pay weeks, rent weeks, and the different Sabbath observances of Christians and Jews all shaped the urban lending industry and in turn structured the microfinances of ordinary life. Although interest rates were calculated by the month, borrowers had to repay the full interest on a loan even when they redeemed pledges after a week, as they often did. More generally, the rhythms of the pawning week, in tandem with the pay period on which it depended, became a feature of the urban timescape, determining when working people had money to spend and when they could gain access to their valued possessions. Like taverns and boardinghouses, pawnshops registered this calendar with special sensitivity, but the pay week shaped more than just business cycles; it shaped urban experience. David M. Henkin is Margaret Byrne Professor of History at the University of California, Berkeley. His books include The Week, The Postal Age, and City Reading.