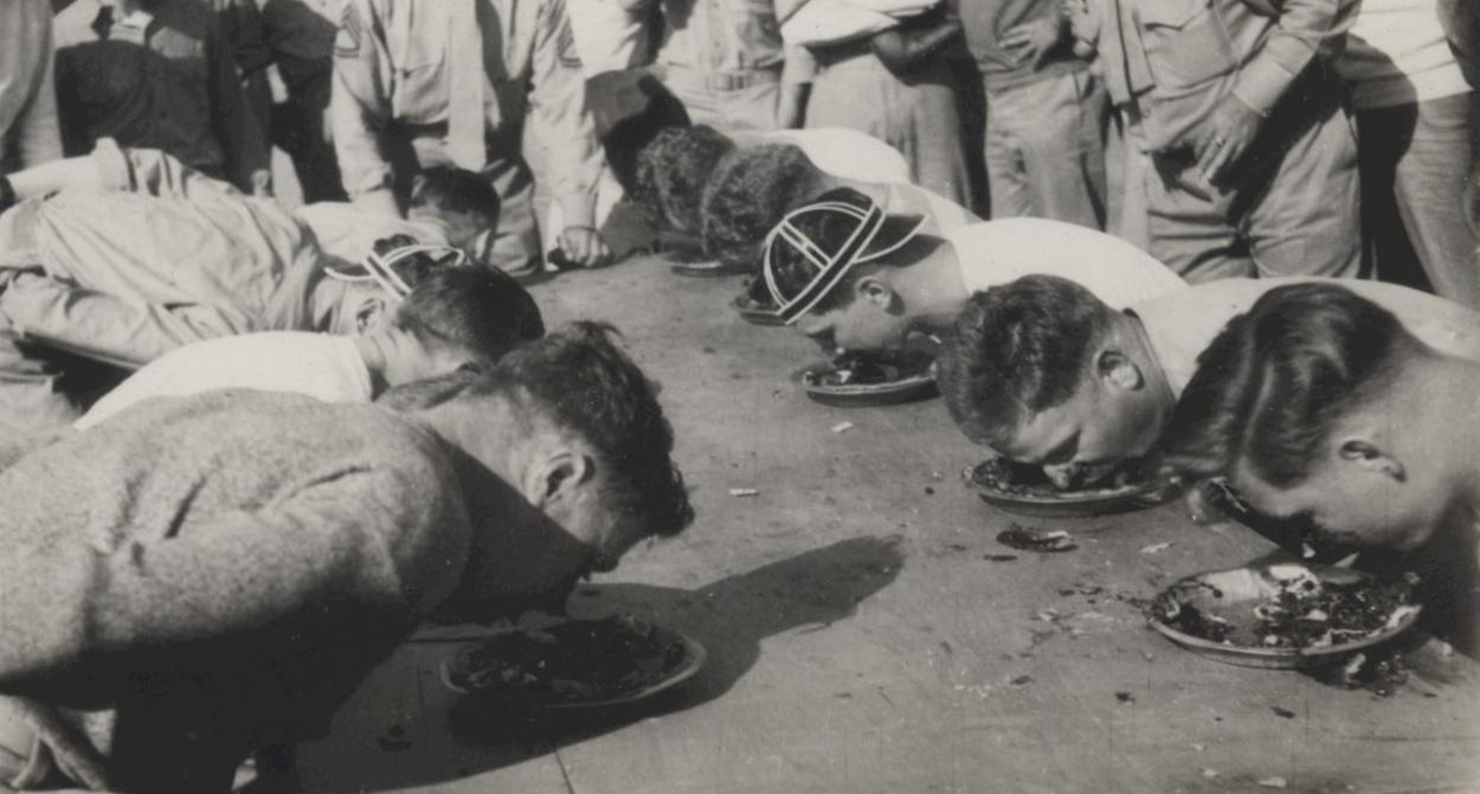 If you’re like me, you’re going to spend this Thanksgiving devouring as much pie as possible. It’s the season for my favorite pies: apple, pumpkin, pecan; Dutch apple, pumpkin with a crème brulee crust, bourbon pecan. I wouldn’t say no to a sweet potato pie or butterscotch pie, either.

I’ve often wondered if I should take my love of pie to the competitive stage. I’ve always been encouraged to pursue my dreams, and eating is a skill at which I am adept; it seems only natural that I should start training to participate in a pie-eating contest. While considering the pursuit of my new career, a thought dawned on me: when on earth did pie-eating contests originate, and why?

Competitive eating contests have become common today, from the fictionalized pie-eating in the movie Stand by Me to the annual Fourth of July hot-dog-eating competition at Coney Island. Where these events came from and how they evolved over time—from masculine showdowns and competitions with racist overtones to family-friendly events—proved surprising.

In January 1878 the first-ever pie-eating tournament took place in Toronto. Created to raise money for a charitable cause, the competition was won by Albert Piddington, whose prize was a “handsomely bound book.” The event was covered in newspapers all over the United States, giddy with descriptions of this unorthodox form of “the latest new entertainment.” The Indianapolis Journal took time to explain the event in detail to its readers, who were uninitiated to the specifics of pie-eating tournaments:

A certain number of very luscious and very sticky tarts, say of raspberry or other fruit, are placed on low stools, and the game consists in eating them without the aid of the hands, a prize being offered to the person who eats the most in a given time. The contestants hands being tied behind them, and they make the assault on their bended knees. The spectacle of a row of dignified gentlemen or beautiful ladies with faces besmeared with jelly and bolting tarts, with their hands tied behind them, would be one to instruct and amuse.

Searching through newspaper archives, I discovered that pie-eating contests were originally called pie-eating tournaments. Pies were cheap and popular, readily available foods for nineteenth-century Americans and Canadians alike. Although Canadians were the apparent originators of competitive eating, after the newspaper coverage circulated in America, pie-eating competitions caught on across the country. Some were head-to-head challenges, run like a boxing match, while others were group competitions. Unlike the Canadian competitions, in which women participated, the American pie tournaments took place at men’s clubs and male-only bars. For the male participants, pie-eating was a reflection of their masculinity.

In 1897 a particularly famous pie eater named Joe “Spider” McCarthy won the title of East Side pie-eating champion by eating thirty-one pies in competition at Charles Tanby’s Saloon, at First Avenue and 26th Street in Manhattan. Afterward the champion devised a Broadway show based on pie-eating, capitalizing on a 1890s trend for famous athletes to appear in vaudeville shows. Boxer James J. Corbett was a particularly popular athlete; his staged theatrical boxing matches were a direct source of inspiration for Spider.

The gist of Spider’s show was that the main character would win the hand of a baker’s daughter by beating his romantic rival in a pie-eating contest. It was to include “a genuine pie-eating scene with real pies, the first time it has been done on any stage,” Spider told a New York World reporter. He pledged to strip bare to the waist and devour seven pies. “I can finish a ten-cent pie in three bites,” he bragged. “What the public wants is realism. Pie-eating is much more of an American national sport than boxing any day of the week.”

The show, as far as I can tell, was never produced.

Although Spider was unsuccessful in taking pie-eating to Broadway, pie tournaments played before large crowds in another context. Around the turn of the twentieth century, large touring productions featured black performers participating in a variety of activities stereotypically associated with black culture, including a dance called a “cake walk,” boxing matches, and pie-eating contests. These events were spectated by white audiences, including the contest that took place at Madison Square Garden in 1895.

The New York Times reported: “The rollicking, reckless, fun-loving character of the negro of the lower classes was cut loose” at Madison Square Garden, adding that a highlight of the event was “a pie-eating contest between ten picaninnies.” White community fundraisers and charity events often featured black performers boxing or engaging in pie- or watermelon-eating contests as a special part of the entertainment. The Manhattan Bicycle Club ran an event in 1892 that advertised “boxing and a pie-eating contest between two colored men will be special features of the entertainment.” These racial eating contests, as scholar Itai Vardi has called them, reinforced popular stereotypes by depicting black men as voracious, animal-like eaters.

At the same time pie-eating contests were taking place in working-class saloons and between black performers, the events were also popular with men of means as head-to-head matches. After the turn of the twentieth century, “gourmandizing” competitions became the vogue among the wealthy, expanding beyond pie-eating to a new world of competitive consumption. In one 1909 competition at the Fat Men’s Club in Manhattan, the winner ate two hundred and ten oysters, six pounds of steak, nine rolls, ten cups of coffee, and three large pies. Such extravagant consumption was connected to wealth; it was expensive to be fat at the turn of the century. Food costs were high enough that most middle-class Americans couldn’t afford the foods consumed by most Fat Men’s Club members, who weighed two hundred pounds on average. But as cheap food became more readily available by the 1920s, and as ideas about body image changed, the Fat Men’s Clubs died out.

By the 1940s pie-eating contests were featured at community events across the country, such as Boy Scout jamborees, Rotary Club meetings, fraternity parties, and Army versus Navy competitions. Some of these events included a pie-baking competition for the women, but the messy task of devouring the pies was usually left to the men. Competitive pie-eating became rebranded as feminine family fun when it left the dark saloons and men’s clubs and came into the light of local festivals. Pie-eating contests like the one in Stand by Me were common at county fairs by the middle of the twentieth century (minus the revenge puking), and the competitors were most often children. Now that the competition is dominated by families, the idea that something “ain’t no pie-eating contest” implied that what had once been considered a herculean tournament of men was insultingly easy. This shift was a far cry from the butch competitions of the nineteenth century.

Today competitive eating is big business, and both male and female competitive eaters are treated like professional athletes. The annual Nathan’s Hot Dog Competition is broadcast on ESPN, and the competitors are announced with all the grandeur of professional boxers. Winning competitors, such as Joey Chestnut and Takeru Kobayashi, travel the country making a living binge-eating everything from pizza to cow brains to apple pies. And the emphasis on masculine toughness has returned: in a 2013 interview, Chestnut boasted that when he ate two gallons of ice cream at a contest, “it even changed my core body temperature.”

As pie-eating tournaments regain their former popularity, it’s important you should be prepared in case you are faced with a stack of pies, your reputation on the line. As I prepared for my future fantasy career, I discovered a few tips that helped me win a head-to-head stage match last fall. At a Thanksgiving lecture on the history of pie (part of an events series I host called the Masters of Social Gastronomy), I challenged my friend and teaching partner Jonathan Soma to a surprise pie-eating tournament. The pies were brought out, our hands were tied behind our backs, and at the whistle we tried to eat as much pie as possible in one minute’s time. When the results were presented to the crowd, the winner was clear—I had slaughtered my opponent.

Here are the tricks of the trade that led me to my landmark victory: first, eat the center of the pie down to the pie tin; revealing the bottom of the plate makes it look like more pie has been consumed than you’ve actually eaten. Second, don’t hold your breath while devouring; tip your head slightly sideways to make sure your nasal passages are pie-free—easy breathing equals easy eating. And third, just remember to remain calm and steady.

As far as keeping all that pie down afterward—well, good luck with that.