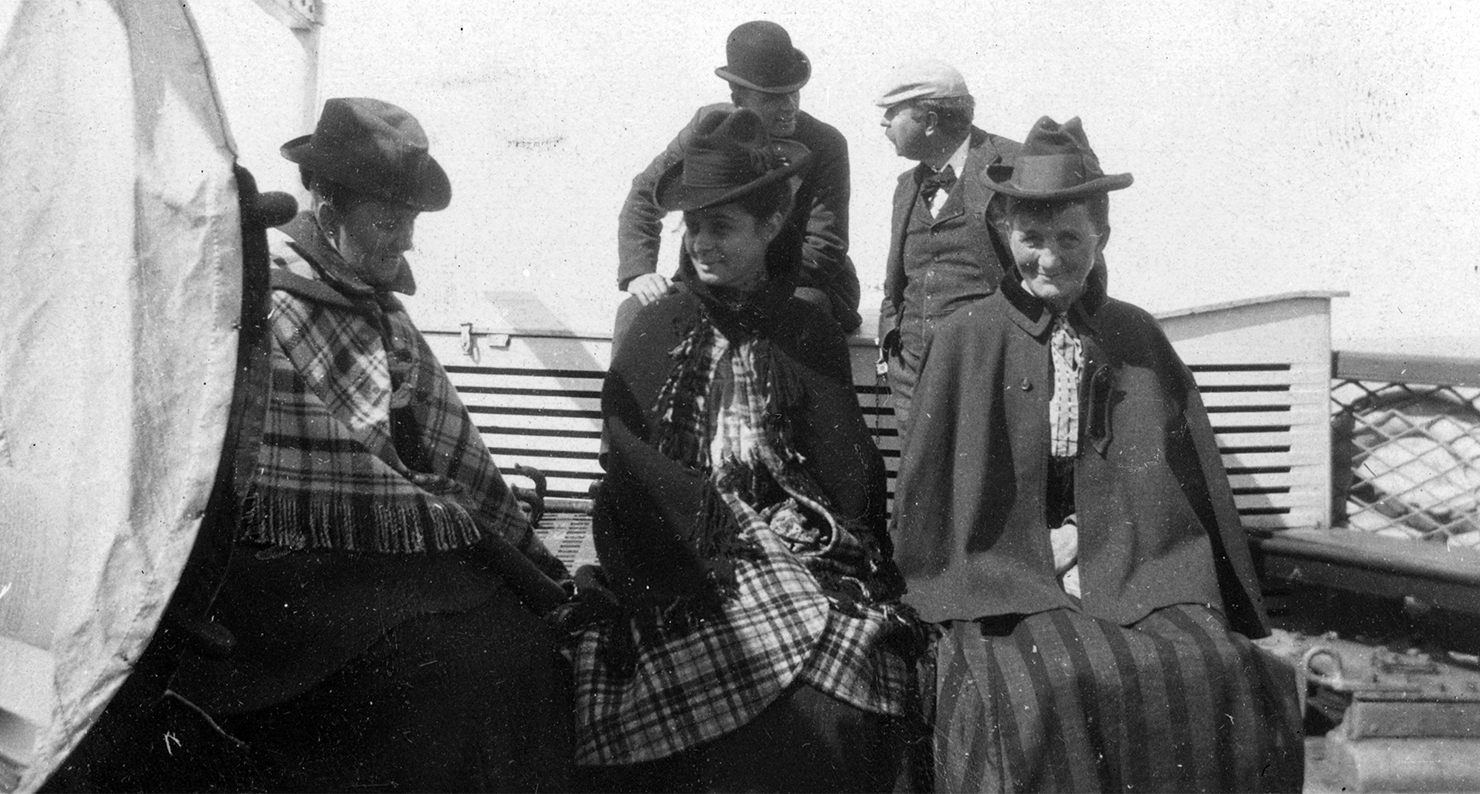 It is so much an instinct with the stronger sex to protect and look after the weaker, that in all cases of the sort, if there is a man at the head of affairs, he had better be left to manage matters without the hampering interference of feminine physical weakness.

So admonishes Lillias Campbell Davidson in her 1889 tome, Hints to Lady Travelers. Her advice, which encompassed all aspects of lady-travel, was above all practical: a traveler ought to have a nicely furnished apartment and a hot fire waiting for her upon arrival, guard her morals and her chastity, and never bring a maid along unless she can afford to have the servant travel with her in first class.

There is nothing surprising about Davidson’s tips for seagoing females, at least those of the wealthy, white variety. At the beginning of the nineteenth century, when scheduled steamship travel cracked the world open for all kinds of passengers—even those of the weaker sex—the role of wives and daughters were assumed to be domestic first, and everything else never.

When the English actress Fanny Kemble sailed to America in 1832, she spent much of the journey improving herself—writing in her journal, doing needlework, reading Dante in Italian or the life of Byron—as well as acting as a hostess for the other passengers, planning activities for the bored and seasick in first class. (Her sailing trip across took five weeks, but a return trip by steamer in 1838 would take only fifteen days.) As the steamship reduced the time spent on board, with a smoother, faster ride, travelling became less of an odyssey and more of a vacation.

The passengers Davidson had in mind did certainly have a passive role, whether they wanted it or not, as Frances Trollope explained in 1830:

In front of the ladies’ cabin was an ample balcony, sheltered by an awning; chairs and sofas were placed there, and even at that early season, nearly all the female passengers passed the whole day there.

With little to do but sit on deck and watch the waves go by, waiting to change into their dinner clothes, the upper class female traveling by steamship became an icon of passive femininity, to be protected from all dangers, especially those posed by men, explains James Fenimore Cooper as he traveled across the country in 1824:

The first thing an American woman requires to commence a journey, is a suitable male escort; the very thing that with us would be exceptionable. Nothing is more common, for instance, when a husband or a brother hears that a respectable acquaintance is about to go in the same steam-boat, stage, or on the same route, as that in which his wife or sister intends to journey, than to request the former to become her protector.

By the middle of the nineteenth century, wealthy bachelorettes and society wives were by no means alone on the high seas—not all women passengers were adorned with servants and silk. Their counterparts in steerage underwent a difficult, unpleasant, sometimes fatal ocean passage. As described in Harper’s in 1865, traveling in steerage was anything but luxurious:

Follow me now into the compartment in which I have discovered “Berth No. 25.” The only standing room in it is a space two yards long by one broad, and to right and left of this rise three tiers of bunks. Imagine the drawer frame of a chemist’s shop destitute of its drawers, and you will be able to form a pretty good idea of these same bunks. There are twenty of them in the compartment, and into each one the future occupant is busy putting what bedding he has provided himself with, as the company provides nothing excepting space and victuals.

During the two-week long passage, women in steerage had duties similar to those they would have had at home—cooking and cleaning were accompanied by new hazards and unpleasantness, including lack of space, scarcity of food, constant seasickness, and stifling proximity to seven or eight hundred other bodies confined to specific parts of the ship.

Then there were the hundreds of wives and daughters of whale-ship captains aboard so-called “hen frigates”—ships that included women not as passengers, but as participants. Though they had no official tasks, their daily lives didn’t consist of laying about on deck. While they didn’t have the run of the ship, and certainly didn’t mingle freely with the crew, chief among their duties was that of moral guardian: bolstering religious sentiment and sometimes literacy, encouraging the seamen to ease off the rum, and reminding them write to their families back home. In addition, they sewed stockings and mended sails, wrote letters, kept journals, and sometimes assisted with navigation.

The whaling captain’s wife dressed to the nines when she was in port; onboard, however, she improvised with an ankle-length “wash dress” and other innovations designed to keep her hems dry and her stride free. She did get to relax in the captain’s stateroom, which was sometimes plain and sometimes not. On Mrs. Alonzo Follansbee’s 1837 journey with her husband aboard his ship, Logan, the room was

...polished mahogany with gilt, rosewood, and satin-wood trimmings, and furnished with a large mahogany center table, which could be enlarged to a dining table; bookcase with mirrors in the doors and two medicine drawers underneath, armchairs, and cushioned transom, that formed a long sofa, and Brussels carpet. And in the center overhead hung the ship’s compass, and at one side hung the Capt’s thermometer and barometer.

Wives, daughters, marriageable young ladies, society wives: what all these typical seagoing women had in common was that their travels relied upon current (or hoped-for) relationships with men. But their very presence on ocean-traversing steamers and brigs created conditions that enabled opportunities for other women, like female cooks and stewards that began working the first class decks. Someone, it turned out, had to wait on the upper-class women traveling by sea, and it would be unseemly for men to do so.

Not that working women weren’t already going to sea by the mid-nineteenth century, challenging Victorian norms and toppling convention entirely by the turn of the century. There were nurses and businesswomen like Jamaica-born Mary Seacole, who spent nearly her whole life traveling for the purpose of business, and whose 1857 autobiography was the first by a black woman to be published in Britain. Nancy Prince, a free black woman who travelled to Jamaica and Russia in the 1840s, was threatened on the way home with physical violence by fellow shipmates and with sale at auction in New Orleans should she set foot on that slaveholding soil. There were journalists like Margaret Fuller, who sailed to Italy for the New York Tribune and died in a shipwreck on the voyage home, and Nellie Bly, who famously undertook Jules Verne’s round-the-world trip for the New York World, steaming across the Atlantic, Pacific, and Indian oceans.

Taken together, these vanguard passengers are more than a quaint feminine footnote to the great male American seagoing adventures. They ushered women travelers out of the margins of American life, and undermined the stereotype of the prim Victorian wife, confined to her parlor, swooning at the slightest provocation. For what is less confining than the sea itself?

Amy Brill is the author of the novel The Movement of Stars, about a female astronomer living in Nantucket in 1845. It was published by Riverhead in the spring of 2013.