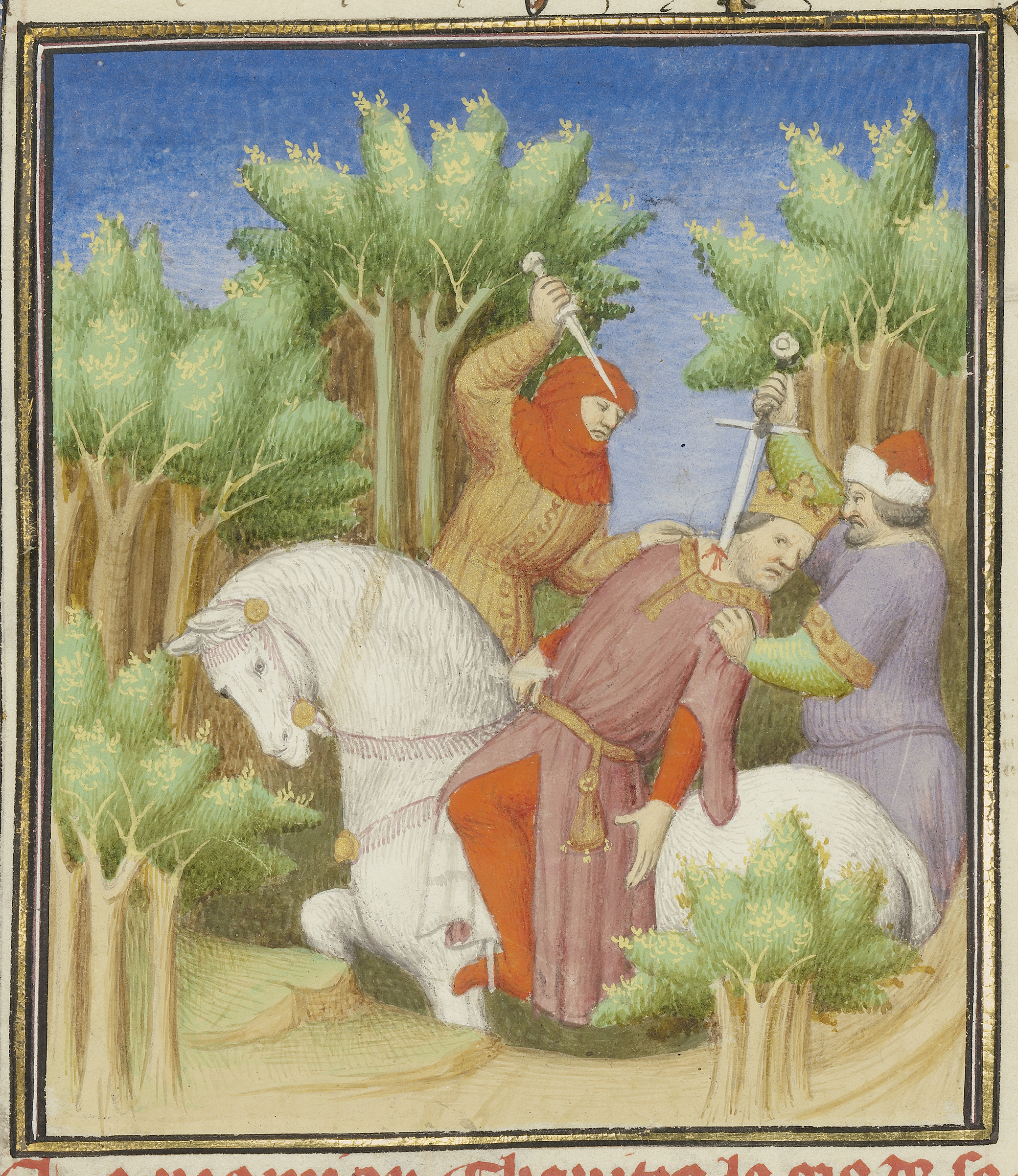 The Roman era saw perhaps the first assassination in British history. In the third century Marcus Carausius, a Menapian from the mouth of the Rhine who, in Edward Gibbon’s words, was “of the meanest origin” but boasted “skill as a pilot, and valor as a soldier” had been hired by the Romans to fight Saxon pirates in the Channel. His modus operandi tended to be to let the pirates mount their raids and intercept them only when they were going home laden with booty.

This made him rich but annoyed Emperor Maximian, who ordered his death. But Carausius launched a preemptive strike in 286, proclaiming himself “emperor of Britain” after using his wealth to bribe the legions and auxiliaries based in the province to support him. He ruled for seven years, defending his territory ably against Caledonian raiders from the north, but a new emperor, Constantius, started to turn the screw, capturing Carausius’ continental base at Boulogne and much of his fleet. While the emperor was preparing to invade Britain, he received news that Carausius had been murdered by his treasurer, Allectus—we have no details of how—who had taken his title. Allectus lasted for three more years, until the Romans defeated and killed him, restoring control of their errant territory.

As with most human enterprises, assassination can have unintended consequences, one of which is to turn the victim into a martyr, as happened with Good King Wenceslaus. Actually he was only a duke, of Bohemia, in what we now call the Czech Republic. Born about 907, he was raised as a Christian by his grandmother Ludmilla. She had married Borivoj, the first Bohemian prince to adopt Christianity, but they were unable to convert the whole country, and after Borivoj died, their Christian son Ratislav married an ambitious pagan named Drahomíra. When Ratislav was killed in battle against the Magyars, the pagan faction gained the ascendancy. Wenceslaus officially took the throne in 921, but because he was so young, his mother Drahomíra acted as regent, while Ludmilla tried to persuade him to advance the Christian cause. Relations between Ludmilla and Drahomíra became very strained, and Ludmilla retired to her stronghold near Prague. But two members of Drahomíra’s retinue, perhaps hired Viking assassins, broke in and strangled her with her own veil while she prayed. Some historians have questioned whether religion was the motivation for Ludmilla’s assassination, pointing out that Drahomíra had been baptized so she could marry Ratislav. Anyway, Ludmilla would be made a saint. 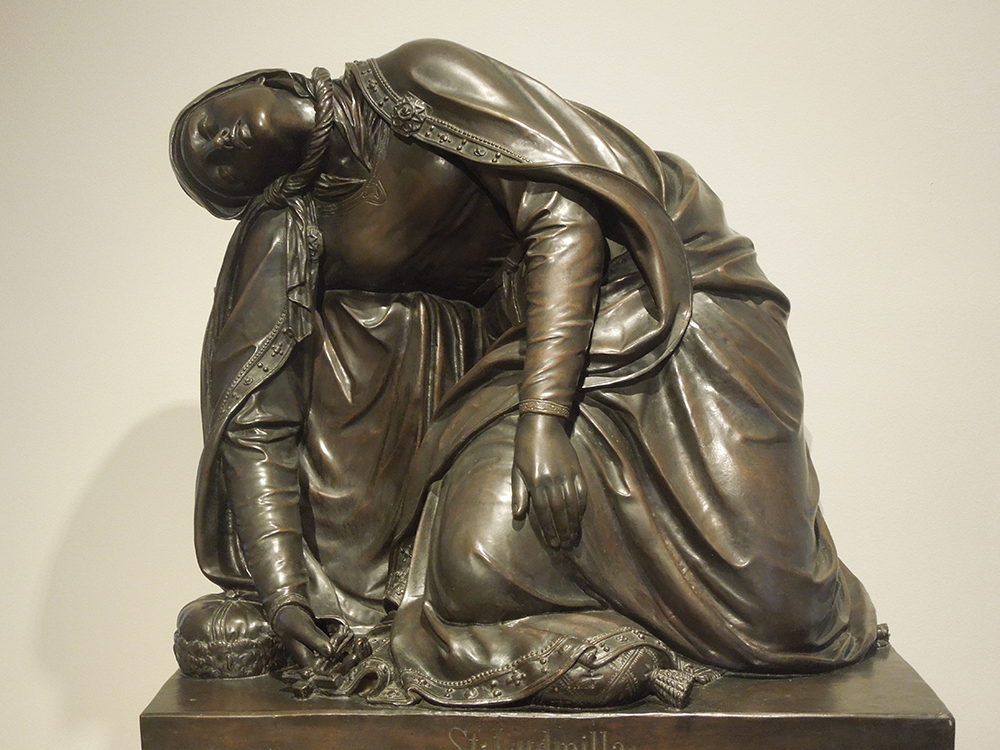 In around 925, with the country perhaps tiring of the squabbling between Christians and pagans, Wenceslaus took over the reins of government himself, and ordered his mother into exile. He set to work as a good Christian prince, sending out missionaries far and wide in his realm. According to a biography written in the late tenth century, he lived a simple ascetic life, going among the poor to hand out alms, preparing the bread and wine for communion, perhaps even taking a vow of virginity. But in 929 the affairs of this world intruded rather roughly when Henry, Duke of Saxony, invaded Bohemia and took Prague. Wenceslaus had to agree to pay him an annual tribute. This, along with his practice of bringing German priests into Bohemia, angered some of the nobility, and Drahomíra allegedly egged on her younger son, Boleslav, to kill his brother.

On September 28 in either 929 or 935, Boleslav invited Wenceslaus to a banquet to celebrate a feast for a couple of saints, but the brothers had a bitter quarrel. Full of remorse, Wenceslaus set off to church to try to purge his anger, but on the way he was set on by three men from Boleslav’s retinue, who killed him, some say at the church door, then cut his body to pieces. There is a story that one of Wenceslaus’ servants killed one of the assassins and was then hanged on Boleslav’s orders. Whatever the truth, the new duke ruled as a Christian, and also helped to spread the word in Poland. In the realm of politics, he was no more successful at defying the Saxons than Wenceslaus, though he did extend Bohemia’s territories. As for the murdered duke, he soon became the patron saint of Bohemia with stories of miracles happening at his tomb, widely revered as the epitome of a righteous king, and the subject of one of the best-loved Christmas carols.

Making a martyr of Wenceslaus does not appear to have had serious political consequences, but the assassination of another Christian ruler did. The English king who became known as Edward the Martyr was not obvious saintly material. Indeed, he was prone to violent outbursts of rage that alarmed everyone around him. His father, King Edgar “the Peaceful,” died suddenly in 975, leaving Edward, as the eldest son, to take the throne while still in his teens.

Edward had a half-brother, Aethelred, born to Edgar’s second wife, Aelfthryth. He was a few years younger than Edward, but Edward’s temper had alienated so many of his nobles that, on Edgar’s death, some lobbied for the younger son to be given the crown. Virtual civil war may have broken out. Certainly, the Anglo-Saxon Chronicle recorded that the nobility were plundering monasteries amid famine and “disturbances,” while “many injustices and evil crimes flourished.”

In spite of this rivalry over the throne, Edward’s personal relations with Aethelred and Aelfthryth seemed cordial enough, and on March 18, 978, he went to see them at Corfe Castle in Dorset. 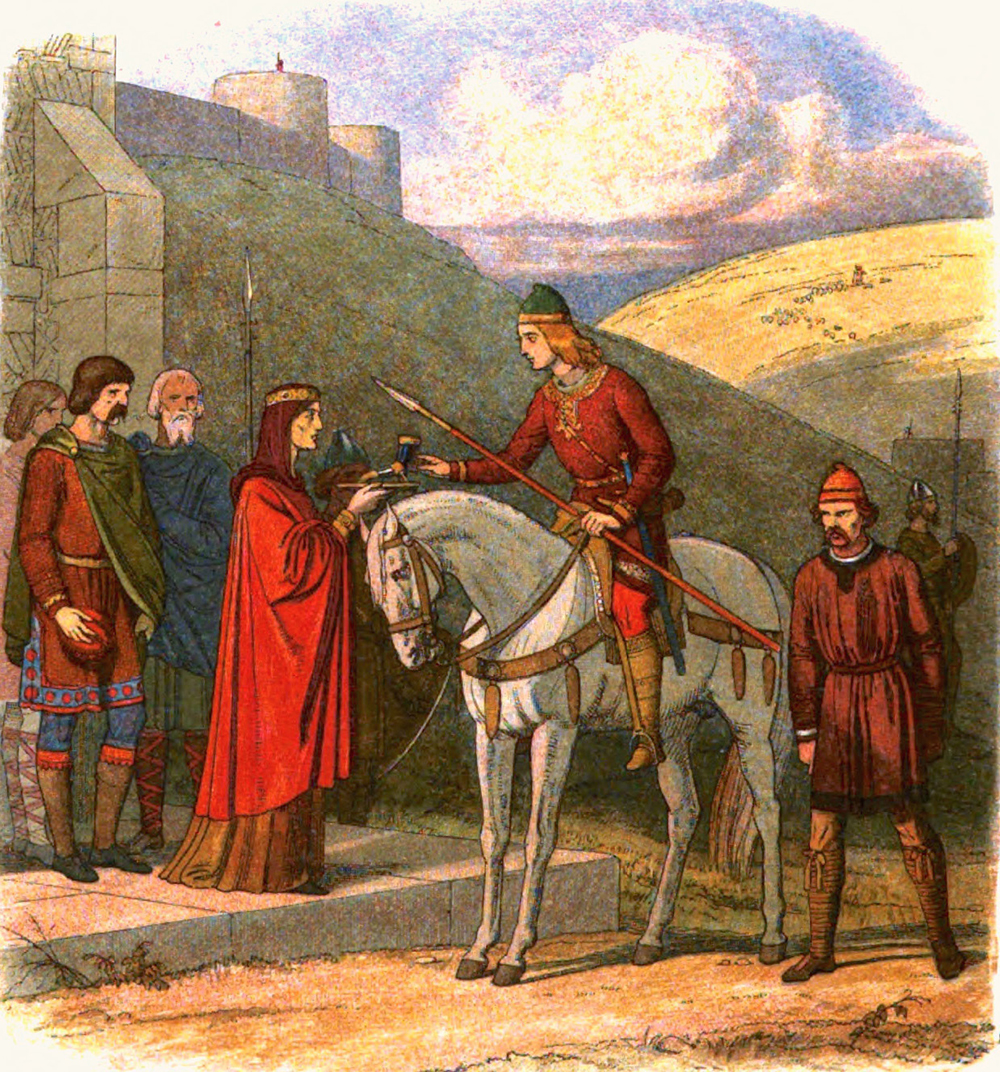 Aethelred’s retainers rode out to meet the king and showed the utmost respect, but as Edward was getting off his horse, they surrounded him and stabbed him to death. There is no evidence that Aelfthryth or Aethelred were in on the assassination plan, but rumors to this effect soon spread. Edward was buried “with no royal honors,” no one was punished for the crime, and within a month, Aethelred was crowned. The Anglo-Saxon Chronicle lamented: “No worse deed for the English was ever done than this.”

Those earthly slayers would have destroyed
His memory upon earth;
But the Celestial Avenger has spread his fame abroad.

Whatever his shortcomings may have been, Edward was quickly made a saint, and when his body was reburied, it was allegedly found to be free from decay. As for Aethelred, he would go down in history as “the Unready,” derided by Kipling for paying the Danegeld—a crippling tax to bribe the Vikings not to mount raids—but never getting rid of the Danes, so that by the time he died in 1016, virtually the whole of England had been conquered. Even if he had not been involved in Edward’s murder, he was still tainted by the fact that he had benefited from it. The prestige of the crown was badly damaged, while people’s loyalty was diverted from Aethelred by Edward’s elevation to sainthood, and some historians believe the Unready’s indecisiveness sprang from the treacherous deed that had made him king. The great Anglo-Saxon historian Frank Stenton, in his volume in the Oxford History of England, wrote that Aethelred never escaped “the consciousness that he had come to power through what his subjects regarded as the worst crime committed among the English peoples since their first coming to Britain.” He lost “the instinctive loyalty of the common people, on which earlier kings had been able to rely,” behaving “like a man who is never sure of himself”: indecisive in war, his relationships poisoned by mistrust.

The prize for the most inventive assassination of the Roman era and the Dark Ages must surely go to a Scots lady named Finella or Finele, who lived in the village of Fettercairn in Aberdeenshire.

In 995 King Kenneth II of Scotland was trying to secure the succession for his son Malcolm, but this meant putting a number of noses out of joint. In those days, the Scottish throne did not pass from father to son. Instead the king’s successor was selected from all the adult male descendants of previous kings. The benefit was supposed to be that you did not get underage monarchs. The downside was that there were plenty of disputes. Writing in the fourteenth century, the first chronicler to attempt a full history of Scotland, John of Fordun, says many nobles opposed Kenneth, and Constantine the Bald plotted “unceasingly” against him. Finally, he and others who were like-minded persuaded the “wily” Finele, daughter of the Earl of Angus, to help them. She had a grudge against Kenneth because he had had her son put to death. So “in an out-of-the-way little cottage,” she set “a kind of trap, such as had never before been seen.” “On all sides” were crossbows armed with “very sharp arrows.” In the middle of the room was “a statue fashioned like a boy, and cunningly attached to the crossbows; so that if anyone were to touch it, and move it ever so little, the bowstrings of the crossbows would suddenly give way, and the arrows would straightway be shot forth, and pierce him through.”

In spite of her son’s fate, Finele always presented “a cheerful countenance” to the king, and “beguiled him by flattery and treacherous words.” One day when he was out hunting, she saw him and fell to her knees. She “besought him with great importunity to come into her house,” affirming that her son had deserved his punishment, and saying that if Kenneth did not come, she would be afraid she was out of favor with him and that he believed the tales of “spiteful” folk who claimed she was disloyal. Then, “tripping up to the king, she whispered in his ear” that she could name names of people plotting against him. Convinced, he went with her to the house and closed the door behind them, so she could impart her secret. The king was immediately intrigued by the statue, and Finele said that if he touched its head, a “marvelous and pleasant jest comes of it.” So curiosity killed the king. He could not resist laying a hand on the figure’s head. This released the “levers and handles of the crossbows; and immediately he was shot through by arrows sped from all sides, and fell without uttering another word.” Finele quickly exited by the back of the cottage and made herself scarce. The king’s retinue, meanwhile, started to get worried. First they knocked on the door, then they broke it down. When they found Kenneth’s body, they ran off in all directions looking for Finele, but to no avail, so they set fire to the village and “reduced it to ashes.” When they did finally catch up with the lady, legend has it that she threw herself from 150-foot-high rocks rather than surrender. Some historians have suggested that, although Kenneth was indeed murdered, Finele was a mythical figure and that her elaborate, booby-trapped contraption was also no more than a figment of the imagination. It appears that after Kenneth’s death, Constantine the Bald did ascend the throne as Constantine III, but was killed in a battle with Kenneth’s son Malcolm a couple of years later. Malcolm finally became king in 1005, and reigned for twenty-nine years. 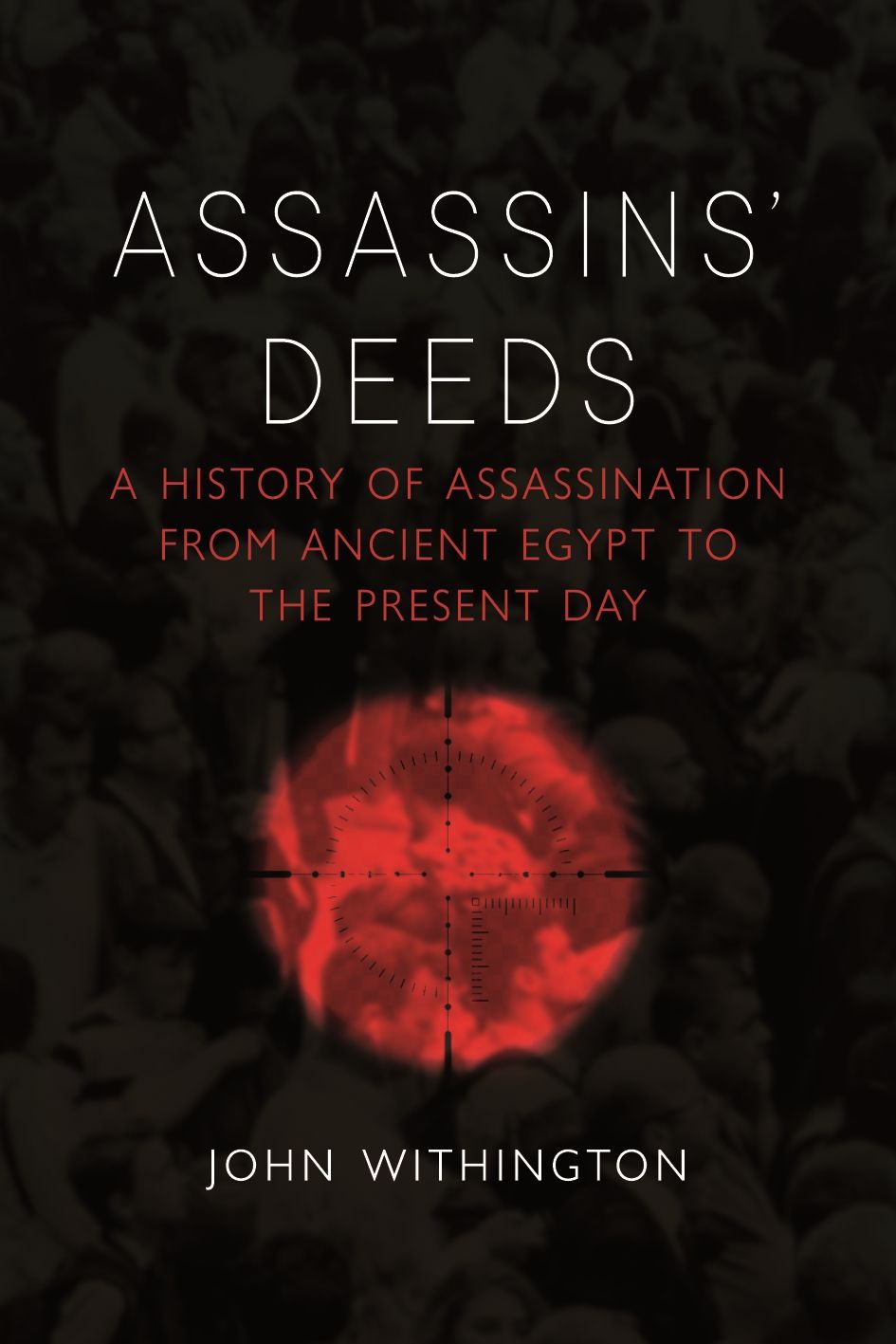 John Withington is an award-winning television reporter, producer, and writer. His books include Assassins’ Deeds: A History of Assassination from Ancient Egypt to the Present Day. He lives in London.