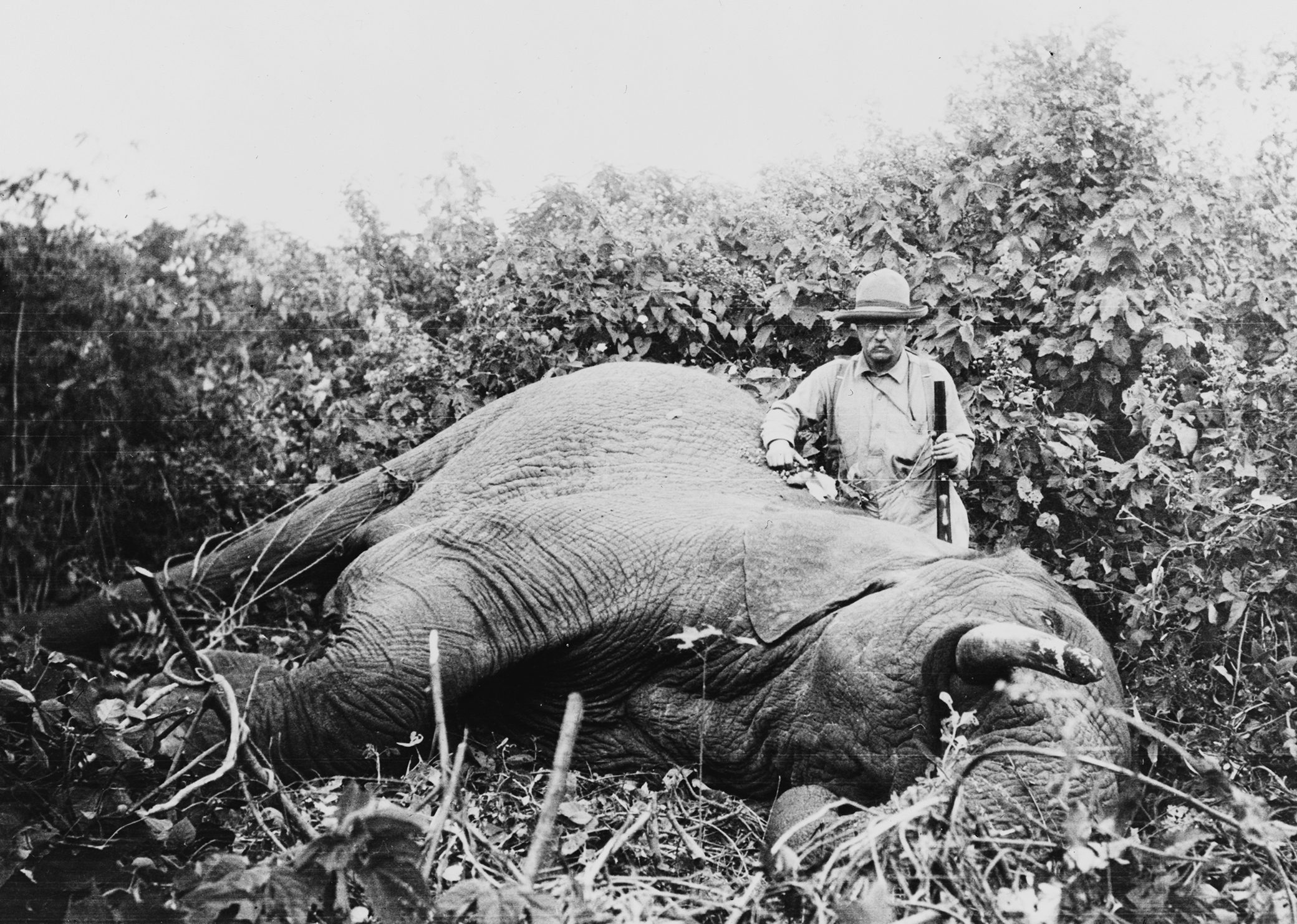 Theodore Roosevelt standing next to a dead elephant and holding a gun, probably in Africa, c. 1915. Library of Congress, Prints and Photographs Division.

Such a lot of guns around town and so few brains. You’re the second guy I’ve met within hours who seems to think a gat in the hand means a world by the tail.
—Raymond Chandler

I have a love interest in every one of my films—a gun.
—Arnold Schwarzenegger

Edit gunplay out of the script, and how then does an American hero preserve, protect, and defend America’s sweet dream of liberty? Or show a gat in the hand backing up the Declaration that all men are created equal?

The questions account for the 393 million guns currently stockpiled in 50 million American households, for the nearly 1,600 mass shootings (four or more casualties) on American soil over the past fifty-six months, for 14 dead and 102 wounded in the streets of Chicago on the 2017 Fourth of July weekend, for the heroes in mufti or escrow variously licensed in all fifty states to tote guns—open carry and concealed, automatic and semiautomatic—into churches, government buildings, barrooms, and schools. The question that remains is the one asking why Americans, alone among the peoples of the earth, seem to think the handling and fondling of guns is the holding of a world by the tail? Wherefrom the romantic delusion, and what chance it goes the distance of another hundred years?

The love interest in guns shows up in the American consciousness in the second half of the nineteenth century, product of the myth-making versions of what by the 1880s was no longer a lawless western frontier. The railroads and the eastern big-money interests had seized much of the land, most of the cattle, nearly all of the tall timber. The eastern tabloid press covered their tracks with stories about a land of the free and home of the brave, good guys and bad guys fighting heroic duels in the sun with Sam Colt’s .45 caliber affirmative-action revolver, dear and true friend of the common man advertised in the 1870s as the “Peacemaker” and known colloquially as the “Equalizer”—“Be not afraid of any man, no matter what his size. When danger threatens, call on me and I will equalize.”

Not that things worked that way in Deadwood or Abilene (best business practice was a bullet in the back at long range with a rifle), but the High Noon setup sold newspapers as well as Colt’s pistols and tickets to Buffalo Bill Cody’s Wild West show that in the 1890s played to sellout crowds in states east of the Mississippi, unveiling what soon became the official portrait of America’s heroic winning of the West. Buffalo Bill didn’t stint the production values—450 horses, 100 former U.S. Cavalry officers, 46 cowboys, 97 Cheyenne and Sioux Indians to reenact stagecoach robberies, Indian attacks on wagon trains, Custer’s Last Stand; feats of astounding marksmanship performed by Annie Oakley, Calamity Jane, Buffalo Bill himself in a four-hour democratic roaring of free-spirited guns.

Around the turn of the twentieth century, the romantic feeling for guns gets mixed up with Teddy Roosevelt’s flag-waving patriotism and dream of American overseas empire. Before venturing into national politics, Roosevelt in the 1880s spent two years on his ranch in the Dakota Territory, most of the time mounted on horseback hunting buffalo (also elk, bobcat, coyote, and antelope).

Back east in 1898, Roosevelt liked to pose for photographs dressed in frontier cavalry uniform made to order by Brooks Brothers. The outbreak of the Spanish-American War prompted him to recruit a private regiment of Rough Riders (western ranch hands and miners, football and polo players out of Harvard and Princeton) and pay their passage to Cuba, urge them upward and onward into a storm of bullets atop San Juan Hill. The exploit earned him the post of vice president on the Republican ticket in 1900, made him president when William McKinley was assassinated in 1901, convinced him of the need to train every American schoolboy in the loving use of a gun.

“To teach our men to shoot,” he says in 1908, so that “we be able to assist in preserving the peace of the world. Fit to hold our own against the strong nations of the earth…Unprepared, and therefore unfit, we must sit dumb and helpless to defend ourselves, protect others, or preserve peace.” 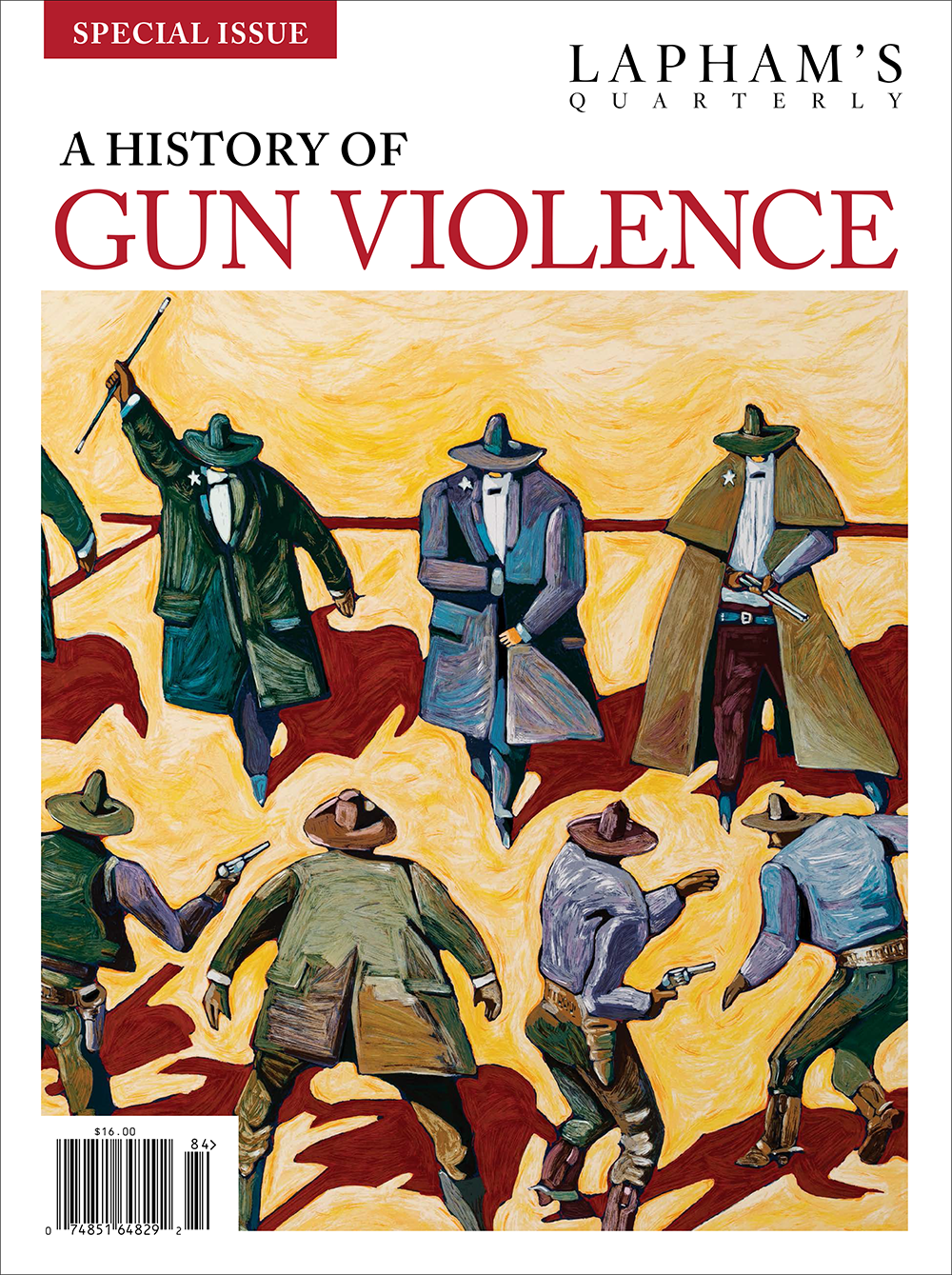 America at the time was under no threat from any power on earth; Roosevelt was intent upon restoring the frontier warrior spirit to an American ruling class, “malefactors of great wealth” weakened in body and soul by the seductions and comforts of money. He recommended strong doses of “Americanism,” by which he meant vigorous physical exercise (outdoors with horses, indoors with medicine balls) coupled with as much gunplay as circumstances could be arranged to allow, if not with Spaniards or the Hunkpapa Sioux, then maybe with Germans. In 1889 he had said to Cecil Spring-Rice, British diplomat in Washington, “Frankly, I don’t know that I should be sorry to see a bit of a spar with Germany; the burning of New York and a few other seacoast cities would be a good object lesson on the need of an adequate system of coast defenses.”

TR sought to bring up to combat strength the defenses implicit in Thomas Jefferson’s notion of Americans as exceptional people because born into the freedoms bestowed by the Constitution. The freedoms allow them to act according to the virtuous moral sense Jefferson believed to be instinctive in human nature. Less fortunate peoples of the earth, enslaved at birth under the rule of tyrant or monarch, commit crimes against humanity. Americans cleanse the world of its impurities.

The precept sponsored TR’s splendid little war in Cuba in 1898, inspired President Woodrow Wilson to bring America into World War I in 1917 to make the world “safe for democracy,” secure “peace without victory.” Wilson asked nothing for America or himself except recognition as the savior of mankind, fortunately armed with enough equalizing and peacemaking gats to hold the world by the tail, teach it how to behave.

Wilson’s conception of American foreign policy as the projection of virtuous omnipotence has remained securely in place for the past hundred years. America, the arsenal of freedom, its massive deployments of force (in Vietnam and Iraq, as in World War II) meant to be understood not as cold-blooded conquest but as tough-love moral instruction. The makers of America’s munitions meanwhile produce the most costly collection of well-intentioned weapons known to the history of mankind—guns and missiles of every conceivable caliber and throw weight, aircraft and naval vessels at all points of every compass, guidance systems endowed with the wisdom of angels and armed with the judgments of doom.

They haven’t yet taught the world how to behave; nor is it likely they ever will win the war declared by both Woodrow Wilson and President George W. Bush against all the world’s evil. They stand and serve, as do American flags and banners of Christ, as magical totems propping up the faithful with the romantic delusion that the possession of virtuous omnipotence is contained in its symbol. Newport News Shipbuilding sells the sweet dream of liberty to the U.S. Navy in the form of aircraft carriers priced at $13 billion. To good guys threatened by enemies everywhere on the horizons of change, the Colt Peacemaker sells these days for $1,799; the dear and true friend of the common man comes loaded with a tangible feeling of empowerment and as many .45 caliber teaching moments as circumstances chance to allow.