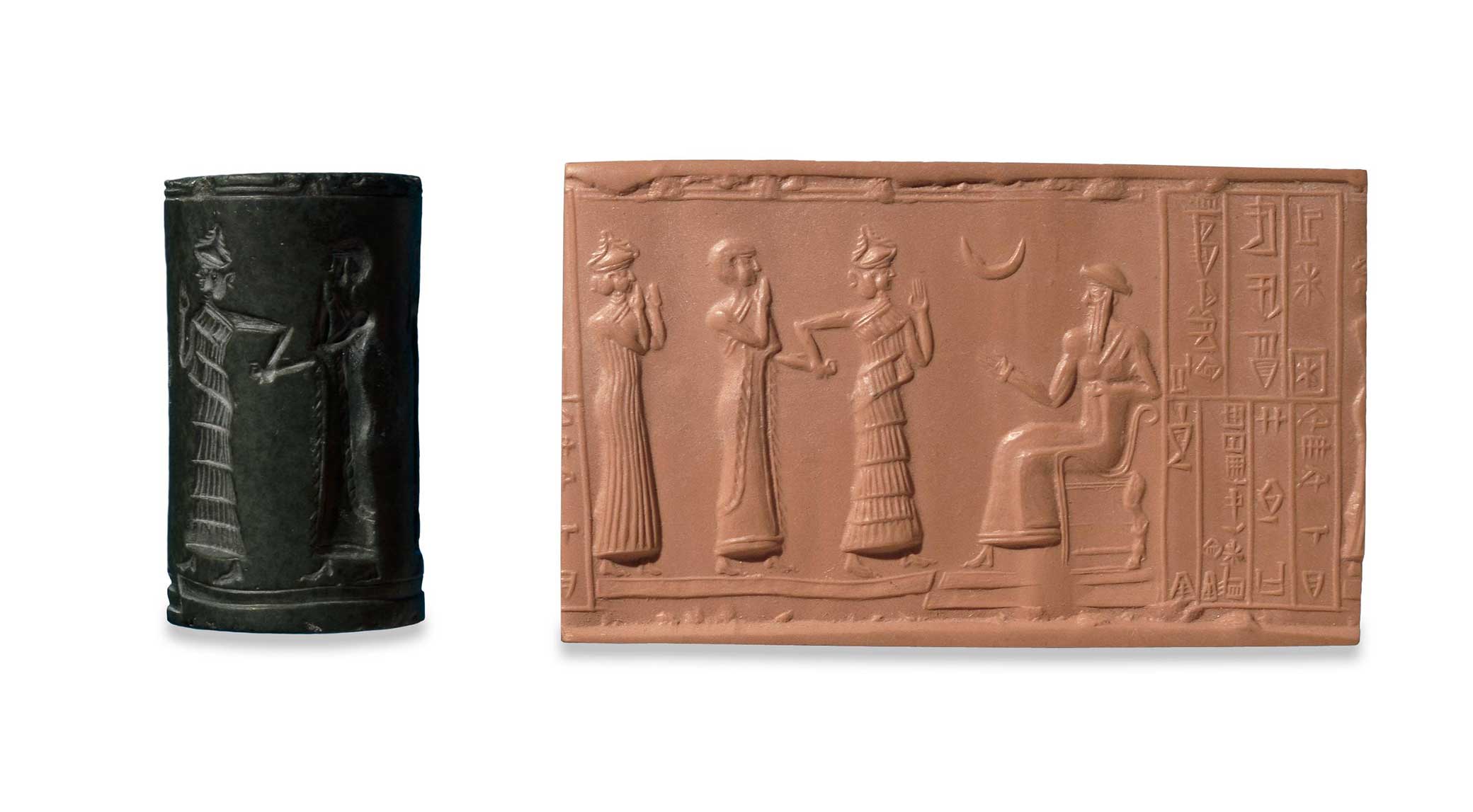 Cylinder seal, Third Dynasty of Ur, c. 2100 bc. © The Trustees of the British Museum.

Like many of his predecessors, Ur-Namma ordered scribes to write out his grand claims about justice on clay tablets. But he followed them with something new, a set of rules. From today’s vantage point, the rules seem rather ordinary, little more than pragmatic directions about compensation payments and punishments. But they are the earliest laws that archaeologists have discovered anywhere in the world. No one knows for sure whether Ur-Namma created the very first laws. He may have been following the example of an even earlier king. But even after the Mesopotamian civilizations were finally overcome by Persian invaders, their legal tradition lived on, indirectly inspiring the laws that now dominate our world.

Irrigation brought prosperity to the Fertile Crescent in the fourth millennium bc. By channeling water onto the flat lands between the great rivers, which run through what is now Iraq, farmers could cultivate barley and wheat, which they ground, boiled, and roasted to create the staple foods of bread and beer. Farther afield on the surrounding pastureland, livestock provided milk, meat, and wool. Women spun and wove the wool into fine cloth, exchanging the most elaborate pieces for silver in Anatolia, a journey of several weeks to the northwest. Flourishing agriculture and successful trading allowed towns to grow, and artisans became skilled in pottery and metalwork, creating delicate jewelry and detailed inlaid patterns on the pillars of their temples and palaces. By the end of the fourth millennium bc, the city of Uruk had perhaps 25,000 people, their homes clustered around a central temple and surrounded by ten kilometers (about six miles) of walls.

It was probably the priests who first developed cuneiform writing, as a means to record the many donations made to their goddess Inanna. People came from all over with offerings of livestock, butter, and grain to fund the elaborate rituals the priests conducted at the temple. The technique of using styluses to press marks onto clay tablets was taken up by merchants, who recorded their stocks and noted down the arrangements they made with traders from distant lands. The city’s governors realized they could use the same method to manage and pay the craftsmen who adorned their public buildings and the laborers who fortified the walls of their cities. They used different symbols for metalworkers, spinners, weavers, potters, and merchants, noting the rations they were to receive.

The priests formed the elite in most early Mesopotamian cities, but in around 2900 bc, a family in the city of Lagash established itself as royalty, the new kings claiming they could intercede with the gods for the benefit of the people. Soon ambitious individuals in all the major cities of Mesopotamia followed suit. To establish legitimacy in the eyes of their people, the new rulers made grand claims about their devotion and their achievements. In elaborate dedications inscribed at their temples, they addressed both the gods and their descendants. As well as recording their temple building and irrigation projects, the new rulers promised justice. An inscription on clay cones from Lagash dating to around 2450 bc records the reforms of King Uruinimgina. Realizing that ordinary people were suffering at the hands of rapacious officials, who were taxing just about every activity imaginable, including funerals, the king sacked the corrupt, reduced taxes, and stopped exploitation of the poor, or so he claimed. “Never,” he promised the gods, “would he allow the orphan or the widow to suffer at the hands of the powerful.”

Writing had become a means for kings to make grand statements about justice.

The cities of Mesopotamia were often embroiled in warfare as rulers competed for control of land and water resources. After the decline of Uruk and Lagash, the rulers of Ur came to power, leaving behind astonishing royal tombs; military conquest then saw the rise of the Akkadian warlord Sargon, who conquered city after city to create an empire on a new scale. His merchants traded with partners in the Arabian Peninsula and the distant Indus Valley, importing copper, cornelian, and lapis lazuli. Vast amounts of livestock and raw materials were moved around by boat. Sargon expanded his administration and large numbers of scribes found employment in government offices, where they wrote tax receipts, recorded population censuses, noted rations and wages, and inscribed royal edicts. The cities grew, professions became more specialist, and without systems of redistribution, the poor who fell on hard times had to borrow grain or food. Patterns of debt and credit developed, which allowed the wealthy to seize the property of the impoverished. It was these practices that had created the gap between rich and poor, which the king of Lagash claimed to redress. Practically all the new rulers used debt amnesties to try to redress the imbalances, and prophets of the gods even issued direct instructions to the kings to act justly whenever someone appealed to them for judgment. 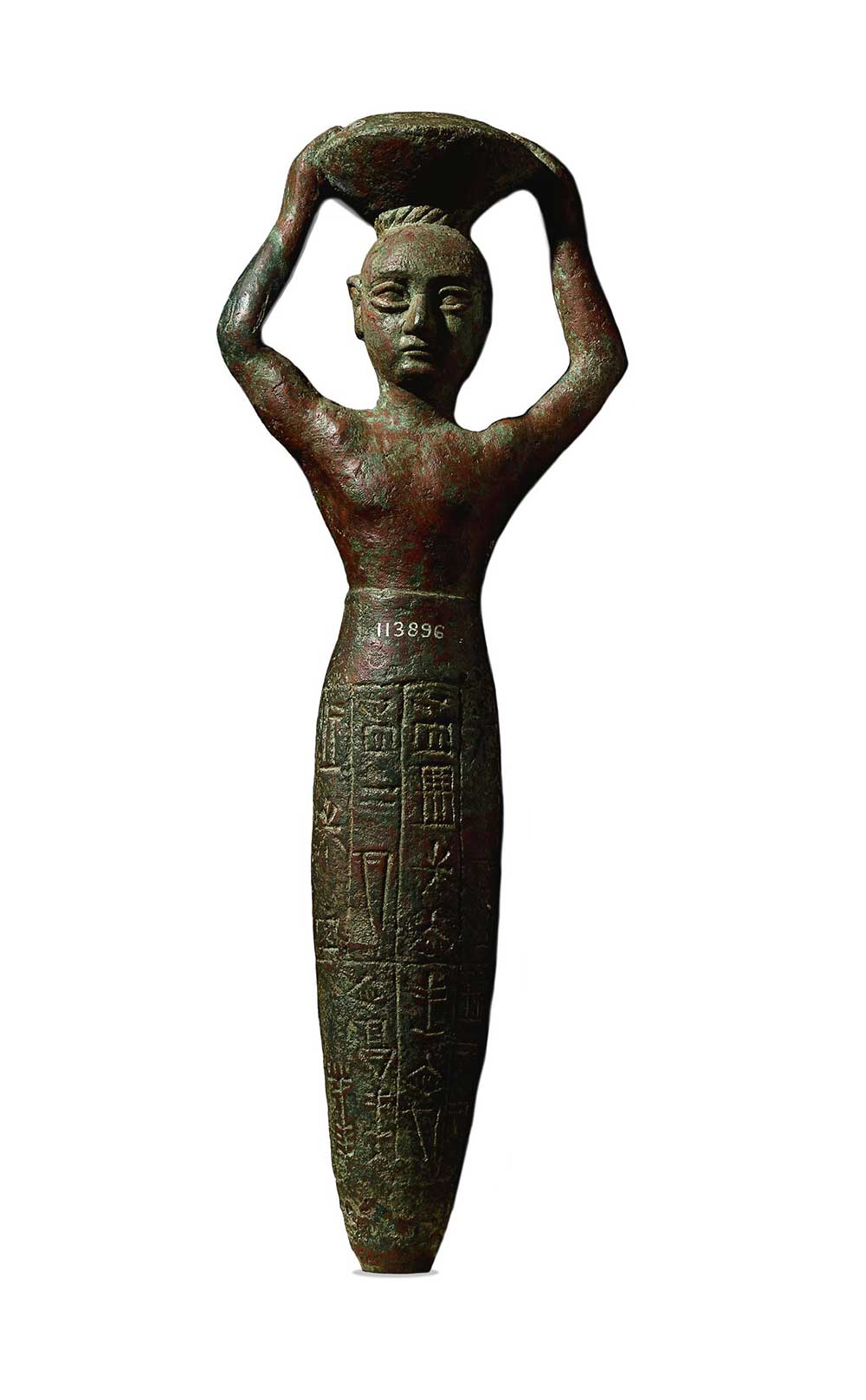 Late in the third millennium, Ur-Namma conquered Ur and “liberated” the surrounding towns. He established control over most of the former Akkadian Empire, introducing systems of taxation, standardizing weights and measures, and promising justice to the people. Ordering scribes to record his projects of justice on clay tablets, he followed them with a set of laws. These specified how wrongdoing should be addressed, using a casuistic form: “If…then…” One provides, for example, that “if a man (wrongfully) detains another he shall be imprisoned and he shall weigh and deliver fifteen shekels of silver.” The rules were intended to regulate future relations: instead of simply doing justice to those who came to him with petitions, Ur-Namma established rules that were supposed to last.

Thirty-seven of Ur-Namma’s laws survive. They are far from comprehensive, and, certainly by later standards, they are not sophisticated. They direct punishment or compensation for murder, injury, false imprisonment, and sexual offenses of different kinds; they specify what should happen to slaves who have relations with their owners or behave badly; and there are rules for divorce and marriage, oaths and accusations, and agricultural disputes. They are the sorts of rules that a judge could apply in a court. But there is no evidence that any judge ever did, which makes it difficult to discern how anyone could have used them in practice. There were courts in Ur, and surviving tablets record their decisions, but they never refer to Ur-Namma’s laws. The laws probably did reflect existing practices—the issues people took to the judges and the ways they were resolved. Any complex society in which people form social and professional relationships, especially with those whom they do not know well, needs a means of resolving disputes. In all likelihood, the judges of Ur were mediators and conciliators who would cajole or pressure people to reach agreement along well-established lines following known customs. And the kings may have appointed a few specialist judges to decide on punishment for wrongdoers, which other powerful officials might enforce. In writing his laws, Ur-Namma was probably trying to regularize these practices or even to institute new, more just traditions. But they were still more like statements of principle, examples of good practice, than rules to be enforced.

This does not mean, however, that the laws were empty promises. By now, it was well established that a king with divine sanction had to ensure justice for his people, even if his successes were built on warfare, plunder, and slavery. By making laws, Ur-Namma was promising that anyone wrongly imprisoned, or thrown into debt bondage, should get relief. He was trying to put Ur society on a new footing. By publicizing his laws for all to see, he made it easier for people to hold his officials to account. Anyone could now quote a law, which had been pronounced by the king. It was the beginning, indeed, of the rule of law.

The first law codes were statements of propaganda, but they also established a technique that would be taken up again and again over the following centuries and that would be put to many different uses. Ur-Namma’s rules for divorce and agricultural disputes may not seem momentous, but the legal form claims an authority of its own. Legal rules can be quoted and misquoted, flaunted by rulers, and put at the heart of pleas for justice. They can shape human relations for both good and for bad.

Excerpted from The Rule of Laws: A 4,000-Year Quest to Order the World by Fernanda Pirie. Copyright © 2021 Fernanda Pirie. Available from Basic Books, an imprint of Hachette Book Group, Inc. 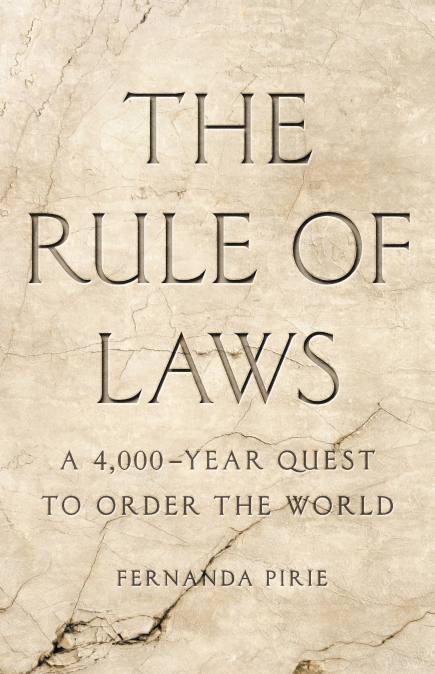 Fernanda Pirie  is a professor of the anthropology of law at the University of Oxford. She is the author of The Rule of Laws and The Anthropology of Law and has conducted fieldwork in the mountains of Ladakh and the grasslands of eastern Tibet. She previously spent almost a decade practicing as a barrister at the London bar.