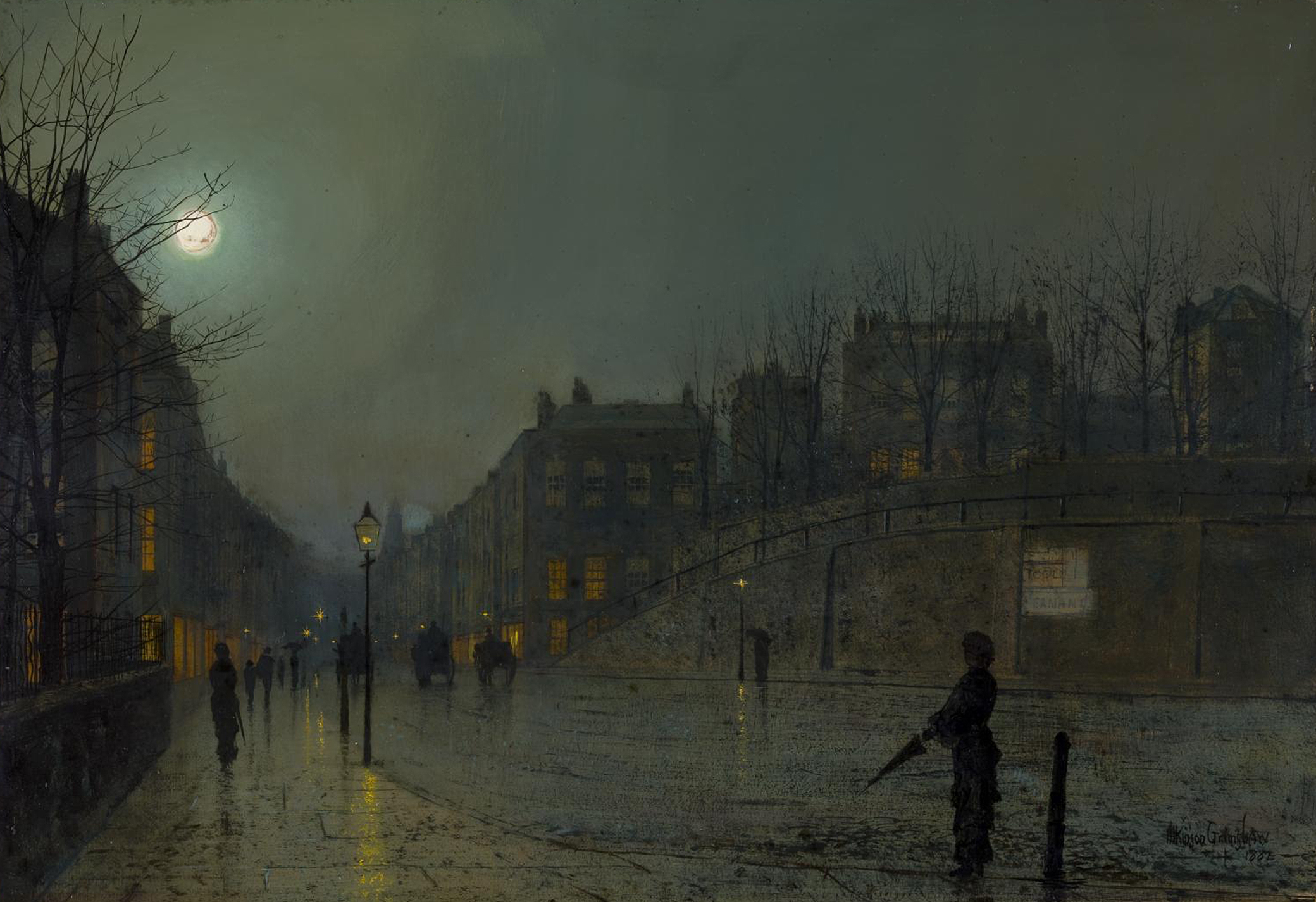 bolide: A bright meteor that fragments or explodes and falls in the form of aerolites. From Greek βολίς, missile.

civil dawn: The time of morning when the sun is six degrees below the horizon and there is enough light for objects to be distinguishable and outdoor activities to commence.

cockshut: Twilight; perhaps derived from the time when poultry are shut up to rest.

crow time: The predawn period; a time when the cock crows (Latin gallicinium). According to English medieval texts, it is the fifth of seven periods of the night.

curfew: A regulation requiring people to remain indoors. In medieval Europe a bell sounded in the evening to indicate couvre-feu, or the putting out of fires.

Dämmerschlaf: German for “twilight sleep,” a drug-induced state of amnesia and partial analgesia.

dawn raid: (stock-market slang) A swift and clandestine operation effected early in trading whereby a broker obtains for his or her client a marked increase in shareholding.

daylight gate: A portal that appears at dusk in the woods of northern England. Anyone passing through the gate enters the land of the devil. (See Jeanette Winterson, The Daylight Gate.)

Dutch nightingale: An animal (esp. a frog) with a loud, unmusical nocturnal call.

earthshine: Bright crescent moon joined with the glow of the dark portion of the moon, the result of sunlight reflected from Earth’s dayside onto the moon’s surface.

eulachon: An oily anadromous fish (Thaleichthys pacificus) of the smelt family; when dried, it is used as a candle. From Chinook jargon ulakan.

lampblack: A pigment consisting of almost pure carbon in a state of fine division; made by collecting soot produced by burning oil or gas. First known use, 1598.

lantern jaw: Long, thin jaws that give a hollow appearance to the cheek. “Drink yourself, and light up your lantern jaws, old boy.”—W.M. Thackeray, 1847

linkboy: A boy employed to carry a torch for those on the streets at night. From link, a torch made of tow and pitch (sometimes wax or tallow), formerly much in use for lighting a person’s way.

lullaby: A song sung to children to put them to sleep. Also, any song that soothes to rest. “Rocking movements put us to sleep because sleep in its essence is itself a rocking, not a stable, motionless state.”—Jean-Luc Nancy, The Fall of Sleep

lunar mansion: An astrological division of the sky considered the seat of greater influence of a planet; each of the twenty-seven or twenty-eight divisions of the ecliptic. “The eighte and twenty mansiouns / That longen to the moone.”—Geoffrey Chaucer, c. 1395 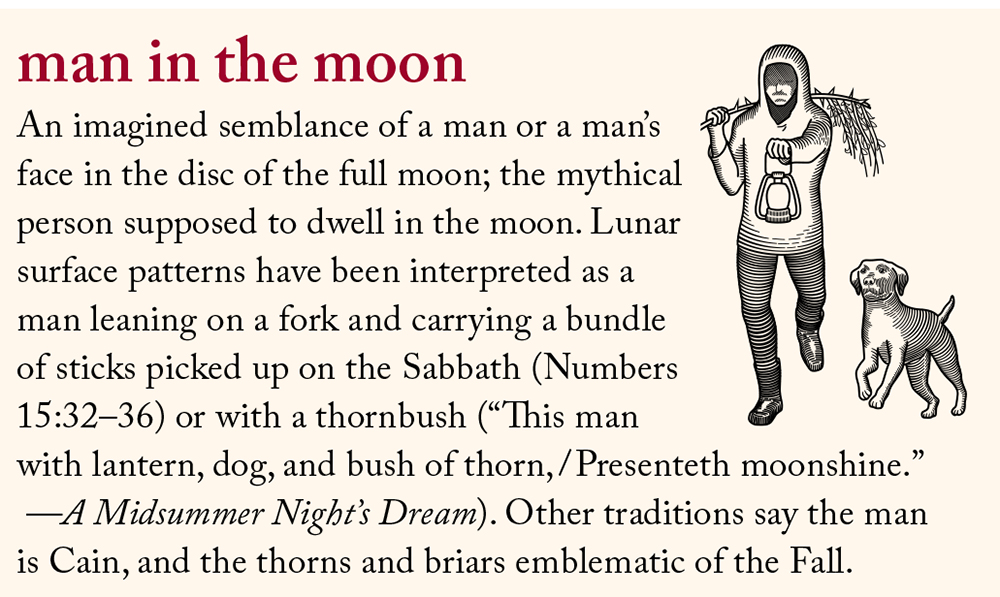 man in the moon: An imagined semblance of a man or a man’s face in the disc of the full moon; the mythical person supposed to dwell in the moon. Lunar surface patterns have been interpreted as a man leaning on a fork and carrying a bundle of sticks picked up on the Sabbath (Numbers 15:32–36) or with a thornbush (“This man with lantern, dog, and bush of thorn, / Presenteth moonshine.”—A Midsummer Night’s Dream). Other traditions say the man is Cain, and the thorns and briars emblematic of the Fall.

moon-blind: Blindness that was attributed into the twentieth century to sleeping in bright moonlight, or that manifested only in moonlight.

Nakshatra: नक्षत्र In Hindu astrology, a lunar mansion (which see); from Sanskrit naksatra, dominion over the night.

noctambulo: (obs.) A sleepwalker. “Those noctambuloes and night-walkers, though in their sleep, do yet enjoy the action of their senses.”—Thomas Browne, Religio Medici

noctivagator: A criminal who wanders at night; a common nightwalker; generally, a homeless itinerant or vagrant who cannot afford a lantern or torch; an “ill liver” who spends the hours between dusk and dawn on the streets.

nuit Américaine: French for “American night.” A filmmaking process that allows shots filmed outdoors in daylight (by under­exposing stock balanced for tungsten light) to appear as if they took place at night.

oneiric: Of, characteristic of, or relating to dreams; dreamlike. From ancient Greek ὄνειρος, dreams, those figures who appear in them; from proto-Indo-European oner.

pittura tenebrosa: Italian for “dark painting.” A style of baroque painting that appeared circa 1600 and is characterized by a contrast between areas of darkness.

primero sueño: Spanish for “first dream.” A preindustrial sleep pattern in which people slept for four hours, then awakened for several hours before falling into a second four-hour sleep. Sueño derives (like Latin somnium and French songe) from the reconstructed proto-Indo-European root swepno, sleep.

serenade: Music performed at night in open air. From Italian serenata, evening song (whence French sérénade); apparently from sereno, open air, substantive use of sereno, serene. “Or the soft serenades above / In calme of night, when cats make love.”—Richard Lovelace, 1649

sleepy: Said of pears and other fruits when they begin to rot.

The Discovery of Night

In Evening’s Empire, historian Craig Koslofsky posits that European attitudes toward night changed profoundly during the seventeenth century. He calls this revolution “nocturnalization,” which he defines as “the ongoing expansion of the legitimate social and symbolic uses of the night.” “Through nocturnalization,” writes Koslofsky, “early modern men and women found new paths to the divine, created baroque opera and theater, formed a new kind of public sphere, and challenged the existence of an ‘invisible world’ of nocturnal ghosts and witches.” Below are the earliest recorded uses of nocturnal words and phrases in English from 1600 to 1625.

stargazy pie: A Cornish fish pie made with pilchards in which the fish heads stick out of the crust.

ṣubḥ kāḏib: Arabic for “false dawn,” a transient light that precedes true dawn by about an hour.

sunset industry: A declining business sector, often one that has been established for a long time.

twilight: Light diffused by the reflection of the sun’s rays after sunset and before sunrise. From West Frisian twieljocht. The exact force of twi- is doubtful: compare Middle High German zwischenliecht, tweenlight, and Low German twêdustern, twêdunkern, lit. “twi-dark.”

watchman: A man appointed to keep watch from sunset to sunrise; later, a constable who patrolled streets by night to safeguard life and property. “Now thieves and ruffians are awake, and honest watchmen fast asleep.”—Henry Fielding, 1749

Zeitgebers: German for “time givers.” External cues that affect the circadian cycle, such as sunlight, morning sounds, and meals.