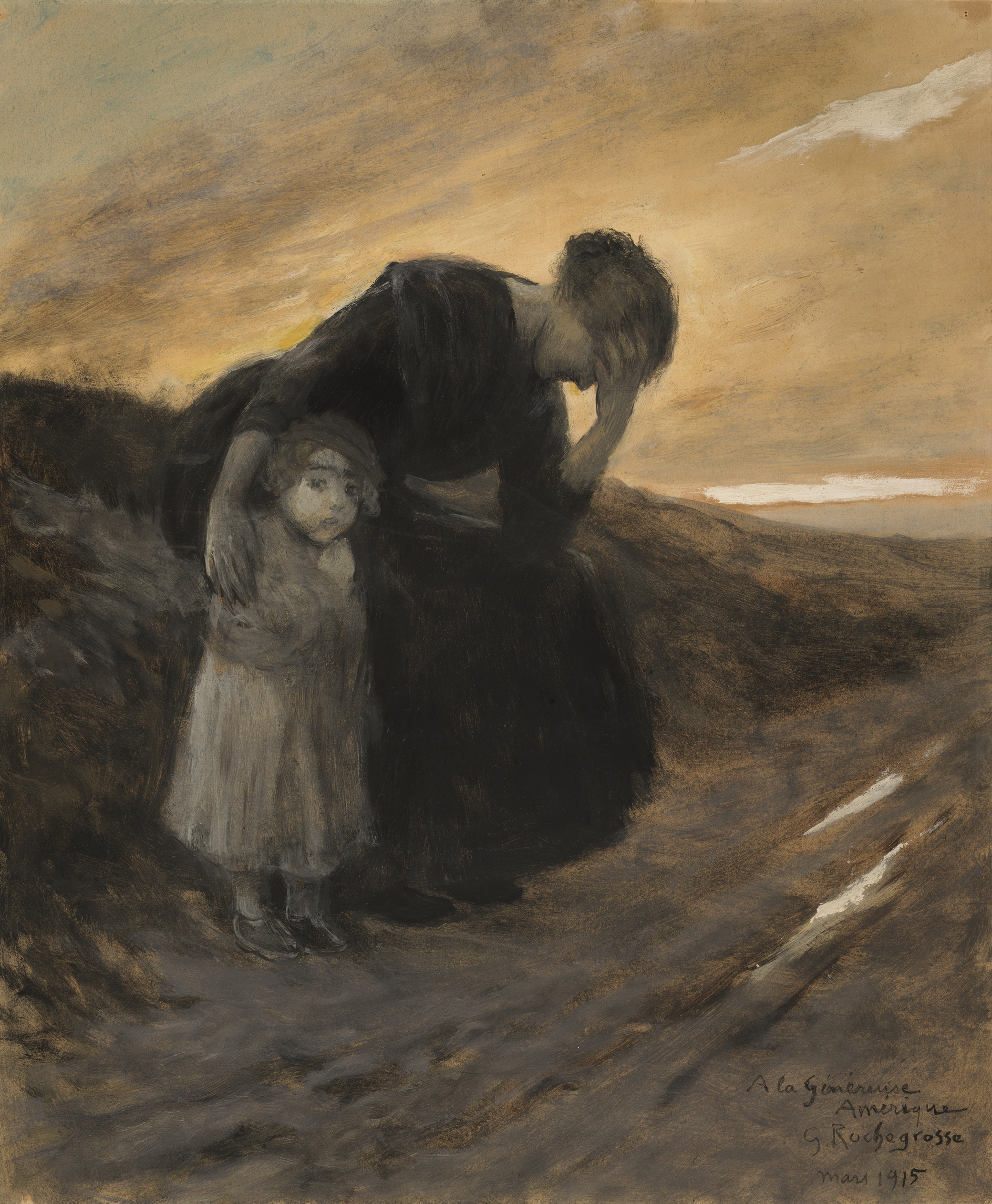 Before the American Revolution, individual colonies restricted their borders and expelled undesirable foreign newcomers. After the Revolution, these colonies-turned-states continued their practice of exclusion and ejection. Thus, individual states, and not the federal government, were responsible for the restrictions on foreigners coming to and residing in the United States.

By the late 1790s the United States had become a haven for various refugees, including French radicals and aristocrats, French planters escaping the Haitian Revolution, and persecuted Irish fleeing British rule. Approximately eighty thousand had emigrated from Great Britain, sixty thousand had arrived from Ireland, and thirty thousand French immigrants were living in the United States, many of them residing in Philadelphia.

The Democratic-Republicans, while sympathetic to France in the 1790s, worried that the Haitian planters would bring their sympathies for monarchy and fear of revolution to the United States and support the Federalists. They were also concerned that the free Black Haitian émigrés would import radicalism and insurrection to the slaveholding states. Meanwhile, the pro-British Federalists focused on the anti-British, anti-monarchical Irish, who they feared would become Democratic-Republicans. Irish immigrants who had been members of the United Irishmen, a secret organization fighting against British rule and for Irish independence, established similar societies in the United States and voted Democratic-Republican. The Federalists worried the Irish and French immigrants would unite and work together to bring rebellion against the United States and its government.

The Federalists in Congress and members of the John Adams administration had also become increasingly angered by the verbal and published attacks hurled at them by the Democratic-Republicans. In the 1790s newspapers and their circulation increased, as did their partisanship and use by Alexander Hamilton and Thomas Jefferson as organs of the Federalists and the Democratic-Republicans, respectively. Encouraged by Jefferson, Benjamin Franklin Bache (Benjamin Franklin’s grandson), the editor of the Aurora, the leading Democratic-Republican newspaper published in Philadelphia, explicitly and forcefully opposed the Jay Treaty, the agreement made with Great Britain that granted the U.S. “most favored nation status” and exacerbated tensions with France. Bache turned the paper into an organizing vehicle for the Democratic-Republicans and their support for Jefferson. He denounced the Federalists and described the president as “old, querulous, Bald, blind, crippled, Toothless Adams.”

As war with France loomed, the Federalists seized the opportunity to curb the Democratic-Republicans’ vitriol by turning them into the enemy. The Federalists’ turn toward federal legislation as a tool to suppress the threat of dissent began with naturalization. Under Article I of the Constitution, Congress held the power to “establish an uniform rule of Nationalization,” and in 1790 it passed the first Naturalization Act. Attempting to encourage immigration to the new nation and increase citizenry, the act granted citizenship to “free white persons” of “good moral character” who had resided for two years in the United States. Fears of foreign influence and foreigners’ political participation and support for the Democratic-Republicans led Congress, which was then controlled by the Federalists, to revise the Naturalization Act in 1795, lengthening the time to become a U.S. citizen by increasing the U.S. residency requirement to five years.

Now, on the brink of war, Federalists sought to more than double the residency requirement. On June 18, 1798, Congress passed a new Naturalization Act, which increased the residency requirement to fourteen years. The act also included a requirement for all foreigners over the age of twenty-one to register with a clerk at the nearest U.S. district court to entry or residence and provide identification information, including gender, place of birth, age, nation of origin and citizenship, occupation or status, and residence in the United States.

One week later, on June 25, Congress passed an “An Act Concerning Aliens,” also known as the “Alien Friends Act.” It authorized the president “at any time during the continuance of this act, to order all such aliens as he shall judge dangerous to the peace and safety of the United States, or shall have reasonable grounds to suspect are concerned in any treasonable or secret machinations against the government thereof, to depart out of the territory of the United States, within such time as shall be expressed in such order.” Under the act, foreigners ordered deported could obtain a license from the president to remain if they could prove their presence posed “no injury or danger to the United States.” If a foreigner ordered deported did not obtain a license and attempted to evade deportation, he or she could be imprisoned for up to three years, and the president could deport the foreigner at any time “if public safety requires a speedy removal.” If a foreigner who was deported returns without permission from the president, the foreigner could be imprisoned at the president’s discretion and for as long as the president is of the opinion that the public safety requires it. The act was passed as a temporary measure and set to expire two years from its passage.

The Federalists next turned their attention to the Democratic-Republicans’ criticisms, passing “An Act for the Punishment of Certain Crimes Against the United States,” referred to as the “Sedition Act,” on July 14, 1798.

Over the course of four weeks in 1798, Congress had passed what would become considered the most despotic legislation in American history. The Democratic-Republicans denounced the passage of this restrictive legislation as unconstitutional and undermining American values in democracy, including the separation of powers and sovereignty held by the people and the states, as well as freedom of speech and press. Jefferson wrote to James Madison that the Sedition Act and the Alien Friends Act were both “so palpably in the teeth of the Constitution as to show they mean to pay no respect to it.”

Crafted by a Federalist committee and passed quickly in the Senate, the Alien Friends Act faced two days of debate in the House of Representatives before its passage. The Democratic-Republicans in the House voiced their opposition, raising a number of arguments challenging its constitutionality and the power of the federal government to deport. The Democratic-Republicans first dismissed the Alien Friends Act as alarmist and unnecessary. They argued that the Federalists had failed to prove any threat or danger posed by foreigners in the United States and that the Alien Friends Act was too broad. Not only was it unnecessary and excessive, but also existing state laws were sufficient to punish those who presented an actual threat.

The Federalists declared that the United States had the right to expel whomever it wished. Furthermore, as a sovereign nation, the United States possessed the inherent right to self-preservation and could pass laws “necessary and proper” to expel those foreigners who threatened that preservation and who sought to overthrow the government. The Federalists pointed to the preamble of the Constitution, “We, the people of the United States,” which established sovereignty and the right of the government to pass laws to maintain “domestic tranquility,” “provide for the common defence,” and “promote the general Welfare.” The Democratic-Republicans responded by arguing that the sovereign power was held not by the federal government, but rather by the people and the states.

While the Democratic-Republicans did not dispute that every nation held an inherent right to self-preservation to exclude foreigners from its borders, they insisted that the Constitution did not delegate that power to the federal government. Instead, the individual states held the exclusive power over the admission and expulsion of foreigners. The Democratic-Republicans cited the Tenth Amendment: “Powers not delegated to the United States by the Constitution, nor prohibited by it to the States, are reserved to the States respectively, or to the people.” The Federalists sarcastically dismissed this argument as suicidal at a time when the nation was on the brink of open war with France and there was an enemy within: “Though we see the knife of the traitor held to our throats, we are to wait until the State Governments come in and snatch it away.”

The Democratic-Republicans then contended that even if the Federalists were correct and Congress did hold the power to regulate foreigners, it could not exercise that power now. The Migration Clause in Article I, Section 9 of the Constitution prevented Congress from prohibiting the “migration” or “importation” of those “the States now existing shall think proper to admit” until 1808. The Federalists interpreted the clause differently. They first argued that the prohibition applied only to the importation of slaves, not to immigration or expulsion of free, European, white foreigners. The Federalists then insisted that even if the clause did apply to foreigners, importation and migration could be considered “admission” and not expulsion. While the states controlled the admission of foreigners and the Migration Clause barred Congress from regulating such admission, it did not address or prohibit deportation. Thus, the Migration Clause did not bar Congress from passing an act authorizing the president to deport.

In their final attempt to defeat the Alien Friends Act, the Democratic-Republicans, led by New York congressman Edward Livingston, argued that the act violated the separation of powers, the underlying principle of the nation’s democratic, republican government, which had distinguished it from Europe’s monarchies. By placing absolute power and discretion to deport solely in the hands of the president, without a judicial check, and without due process protections under the Fifth Amendment or legislative balance, the Alien Friends Act would create the potential for despotism. Enforcement of the act would be completely discretionary, and foreign residents could simply be deported at the whim of the president. Livingston predicted the Alien Friends Act would also cause foreigners to flee the United States in fear:

A careless word, perhaps misrepresented, or never spoken, may be sufficient evidence; a look may destroy, an idle gesture may insure punishment; no innocence can protect, no circumspection can avoid the jealousy of suspicion; surrounded by spies, informers, and all that infamous herd which fatten under laws like this, the unfortunate stranger will never know either of the law, or of the accusation, or of the judgment, until the moment it is put in execution; he will detest your tyranny, and fly from a land of desolators, inquisitions, and spies.

Despite their efforts, Democratic-Republicans were unable to prevent the Alien Friends Act from becoming law; it passed in a partisan vote in the House of Representatives before Adams signed it. By this time, Livingston’s fears of fleeing foreigners had already come true, and his concerns regarding the act’s arbitrary and capricious enforcement would prove prescient.

Even before passage of the Alien Friends Act, Jefferson observed that many who were frightened had begun to flee the United States. In July and August, over a dozen ships filled with “anxious Frenchmen” transported them back to France or to Santo Domingo in Haiti. The Federalists celebrated their departure. “When the state is in danger and strong remedies are necessary…none but an ENEMY can resist their use,” proclaimed the Albany Centinel.

Excerpted from Threat of Dissent: A History of Ideological Exclusion and Deportation in the United States by Julia Rose Kraut, published by Harvard University Press. Copyright © 2020 by the President and Fellows of Harvard College. Used by permission. All rights reserved.

Julia Rose Kraut, a lawyer and historian, was the inaugural Judith S. Kaye Fellow for the Historical Society of the New York Courts. She is the author of Threat of Dissent: A History of Ideological Exclusion and Deportation in the United States.