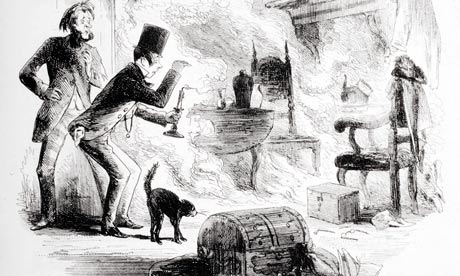 An illustration of the spontaeous combustion of Krook, from Charles Dickens’ Bleak House.

In 1725, a tavern owner in Rheims, France named Jean Millet was accused of the murder of his wife. Millet’s wife was overweight, past her prime, and Millet, an otherwise upstanding member of the community, was reputed to be interested in a young servant girl from Lorraine. When Mme Millet’s remains were found smoldering in the kitchen one night—with only her legs, part of her head, a few large bones and some vertebrae identifiable—suspicion quickly fell to her husband, who was quickly tried, convicted, and sentenced to death. Luckily for the tavern owner, he was saved at the last minute by one of his lodgers, a young and promising surgeon named Nicholas Le Cat, who argued that because Mme Millet was a known alcoholic, the likely cause of her death was not murder, but spontaneous human combustion. Millet was ultimately acquitted, though the ordeal left him destroyed, and he lived out the remainder of his life in a mental institution—haunted, perhaps, either by the fact that he had gotten away with murder, or that his wife really had, suddenly and without warning, burst into flames from too much drinking.

The evils of alcohol abuse have long been known and preached against by the more sober-minded, but for a period of about two hundred years imbibers had a particularly dire consequence to fear: that too much drinking would cause them to catch fire and be reduced to a small pile of greasy ash. A few decades after the Millet trial, on the evening of June 20, 1745, Countess Cornelia Zangari de Bandi of Cesena, of Verona, also burned to death. She was sixty-two years old; she went to bed at a normal hour, but when the maid came in the following morning, she found the Countess’s “corpse on the floor in the most dreadful condition. At the distance of four feet from the bed there was a heap of ashes. Her legs with the stockings on remained untouched and the head half-burned lay between them. Nearly all the rest of the body was reduced to ashes.” The scene was noteworthy in that it many details defied conventional understandings of pyrotechnics: “A small oil lamp on the floor was covered with ashes, but had no oil in it, and, in two candlesticks which stood upright upon a table, the cotton wick of both the candles was left, and the tallow of both had disappeared.” The bed was disturbed as if she had just risen from bed, but neither it, nor any other item in the room, showed any trace of fire. As with Millet’s wife, the Countess was a known drinker.

By 1799, there were enough cases on record for one physician, Pierre Lair, to identify some patterns and recurring characteristics of victims of spontaneous human combustion:

1. Victims were older, usually over 60.
2. Victims were overweight.
3. Victims led inactive lives.
4. Victims were alcoholics.
5. Women were more prone to spontaneously combust than men.
6. At the scene there was often an external flame, such as a candle or fireplace.
7. Combustion was extremely rapid.
8. The flames were difficult to extinguish.
9. The flames produced a strong empyreumatic odor.
10. The surrounding room was coated with a thick, yellow, greasy film.
11. The first usually consumed the trunk of the body, but left the head and extremities intact.
12. Accidents occurred during fair weather, and more often in winter than in summer.

Of all these various causes, it was #4—consumption of spirits—that the nascent Temperance movement latched on to. Moralists have long advocated abstaining from alcohol, but in the United States, during the radical reform era of the nineteenth century (when causes ranging from abolition to vegetarianism to phrenology all promised to cure all of society’s ills), the temperance movement found fertile ground. Teetotalers including Carrie A. Nation and Frances Willard started a slow boiling fervor that would finally boil over when the Eighteenth Amendment was ratified in 1919—and it wasn’t long before the threat of Spontaneous Human Combustion was added to their arsenal.

The February 1863 issue of the Pennsylvania Temperance Recorder, for example, carried a story of a medical student, Jacob C. Hanson under the subdued title of “Fire! Fire! Blood on Fire!” The story claimed that Hanson had been working in a physician’s office when a drunkard stumbled in and admitted to the doctors that he had consumed two gallons of rum in five days. Hanson, alarmed at the imminent possibility of Spontaneous Human Combustion, suggested drawing blood to avert the catastrophe; according to the Recorder, “a pint bowl filled with this fluid was handed to one of the spectators who ignited a match, and on bringing it to contact with the contents of the bowl, a conflagration immediately ensued: burning with a blue flame the space of twenty-five or thirty seconds.”

Lest one think that the fear of spontaneous human combustion as a result of drink was a fringe phenomenon, one only has to consider the work of the literary greats of the day. Thomas de Quincey confessed to fearing that his addictions might lead to such “anomalous symptoms,” including spontaneous combustion. “Might I not myself take leave of the literary world in that fashion?” he wondered. A drunk explodes in Melville’s Redburn, and Charles Brockden Brown’s Wieland also features spontaneous human combustion (though, in a rarity, the victim there is not an alcoholic). And then there is Charles Dickens’ Bleak House, a novel notable not just for being one of the towering masterpieces of Victorian fiction, but because of its thirtieth chapter, in which the minor character—the alcoholic landlord Mr. Krook—spontaneously bursts into flames.

Dickens’ good friend, George Lewes, was not impressed. “The death of Krook by Spontaneous Combustion is certainly not an agreeable incident,” he wrote in his column for The Leader, “but it has a graver fault than that of ‘shocking’ people with ‘sensitive nerves;’ it is a fault of Art, and a fault in Literature, overstepping the limits of Fiction, and giving currency to a vulgar error.” Lewes went on:

Dickens, therefore, in employing Spontaneous Combustion as a part of his machinery, has committed this fault of raising the incredulity of his readers; because even supposing Clairvoyance and Spontaneous Combustion to be scientific truths, and not the errors of imperfect science, still the simple fact that they belong to the extremely questionable opinions held by a very small minority, is enough to render their introduction into Fiction a mistake.

The novel was still in the process of serialization, and Dickens responded in the next installment, adding a preface that claimed that among “men of science and philosophy” there was much “learned talk about inflammable gasses and phosphuretted hydrogen.” Dickens cited the case of the Countess de Bandi, as well as a few others, hoping that would end the matter, but it did not; Lewes responded with more level-headed skepticism, only to be met with an increasingly defensive Dickens. The novelist also wrote a personal letter to Lewes, where he repeatedly pointed to alcoholism as a cause of combustion when it came to “women in the decline of life.” “Refer to the Annual Register for 1773 for the case of Mary Clues—a woman of fifty, and a drunkard,” he wrote. “To the Transactions of the Royal Society of London for the case of Grace Pitt—a woman of sixty; not stated to be a drunkard, but not likely to have been a lady of very temperate habits, as she got out of bed every night to smoke a pipe, and had drunk an immense quantity of spirits within a few hours of her death. Refer to Le Cat for the case of Madame Millet who got drunk every day.”

Lewes finally gave up, so Dickens had the final word when he added a preface to the final publication of Bleak House a year later. “I have no need to observe that I do not willfully or negligently mislead my readers and that before I wrote that description I took pains to investigate the subject,” Dickens stated, claiming some thirty such cases on record of exploding drunkards (including the Millet trial), and ending with a triumphant flourish: “I shall not abandon the facts until there shall have been a considerable spontaneous combustion of the testimony on which human occurrences are usually received.”

It’s not as though that testimony wasn’t widely available (indeed, Lewes had quoted ample evidence against spontaneous combustion in his rebuttals), but so long as the debate over prohibition raged, reformers could and did find favorably reports and hypotheses to cite their contention that alcoholism could literally set the world on fire.

And so, strangely, it was the belief in spontaneous human combustion that outlasted the temperance movement, not the other way around. While largely discredited by the beginning of the twentieth century, it lingered in the medical literature. As the height of Prohibition, Dr. W.A. Brend’s well respectedHandbook of Medical Jurisprudence and Toxicology (1928) contained an entry for spontaneous combustion: “Spontaneous combustion of the body, in the sense that the layman attaches to the words, never occurs; but, very rarely, a state of the tissues exists for which Dixon Mann suggests the term preternatural combustibility. The condition has been most frequently noticed in the bodies of fat, bloated individuals who have been excessive drinkers. Probably, in such cases, inflammable gases are generated in the body after death, and, if a light is near, become ignited, leading to a partial consumption of the soft tissues.” Twelve years after Repeal, one could still find statements such as this, from the Transactions of the Medical Society of London in 1945, which confessed that “we are entirely in the dark as to the real nature of the chemical changes which give rise to this state, but it seems reasonable to infer that they are in some way or other connected with the long use of alcohol.”