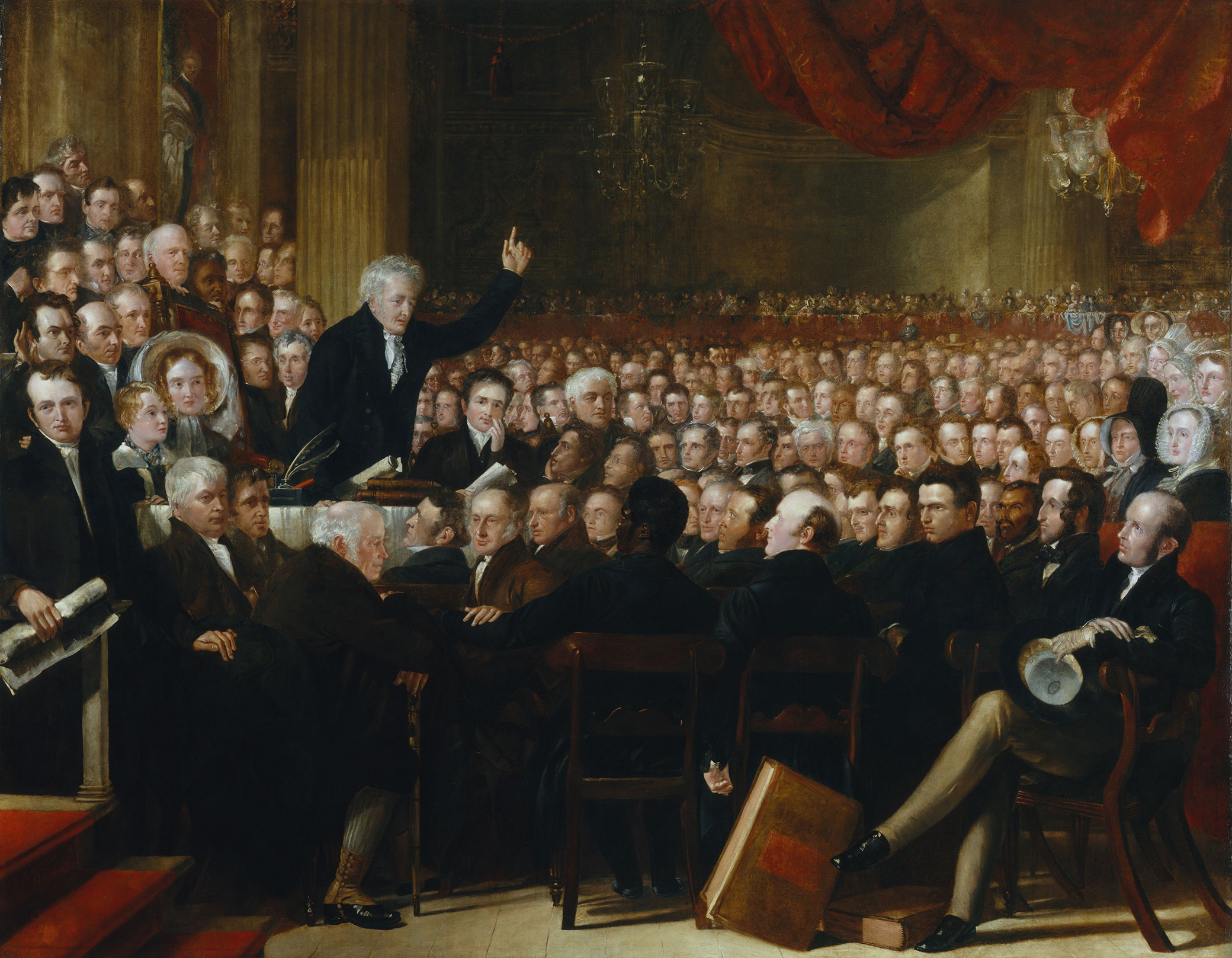 The nineteenth-century Americans for whom William Yates wrote his 1838 treatise, Rights of Colored Men, were fascinated by a juridical puzzle: Not slaves nor aliens nor the equals of free white men, who were former slaves and their descendants before the law? None were more interested in this question than black Americans themselves. The pressures brought on by so-called black laws and colonization schemes explain why free people of color feared their forced removal from the United States. In response, they claimed an unassailable belonging, one grounded in birthright citizenship. No legal text expressly provided for such, but their ideas anticipated the terms of the Fourteenth Amendment.

Yates, a white abolitionist from upstate New York, authored the very first legal treatise on the rights of free black Americans. It was 1838 when Rights of Colored Men to Suffrage, Citizenship, and Trial by Jury was published in Philadelphia. He was not one of antebellum America’s highly regarded legal minds. Some say he read law for a time, although there is no evidence he was admitted to the bar. Instead, Yates’ career began with a short-lived stint as a newspaper publisher. His bona fides on the subject of race and citizenship were best established during his years as an agent for the American Anti-Slavery Society. While many abolitionists maintained a self-conscious distance from free black communities, Yates centered his work there. The oppression of free people of color was a companion to slavery, in Yates’ view, with antislavery work necessarily extending into questions of free people’s status. Penning Rights of Colored Men was the pinnacle of this mission. 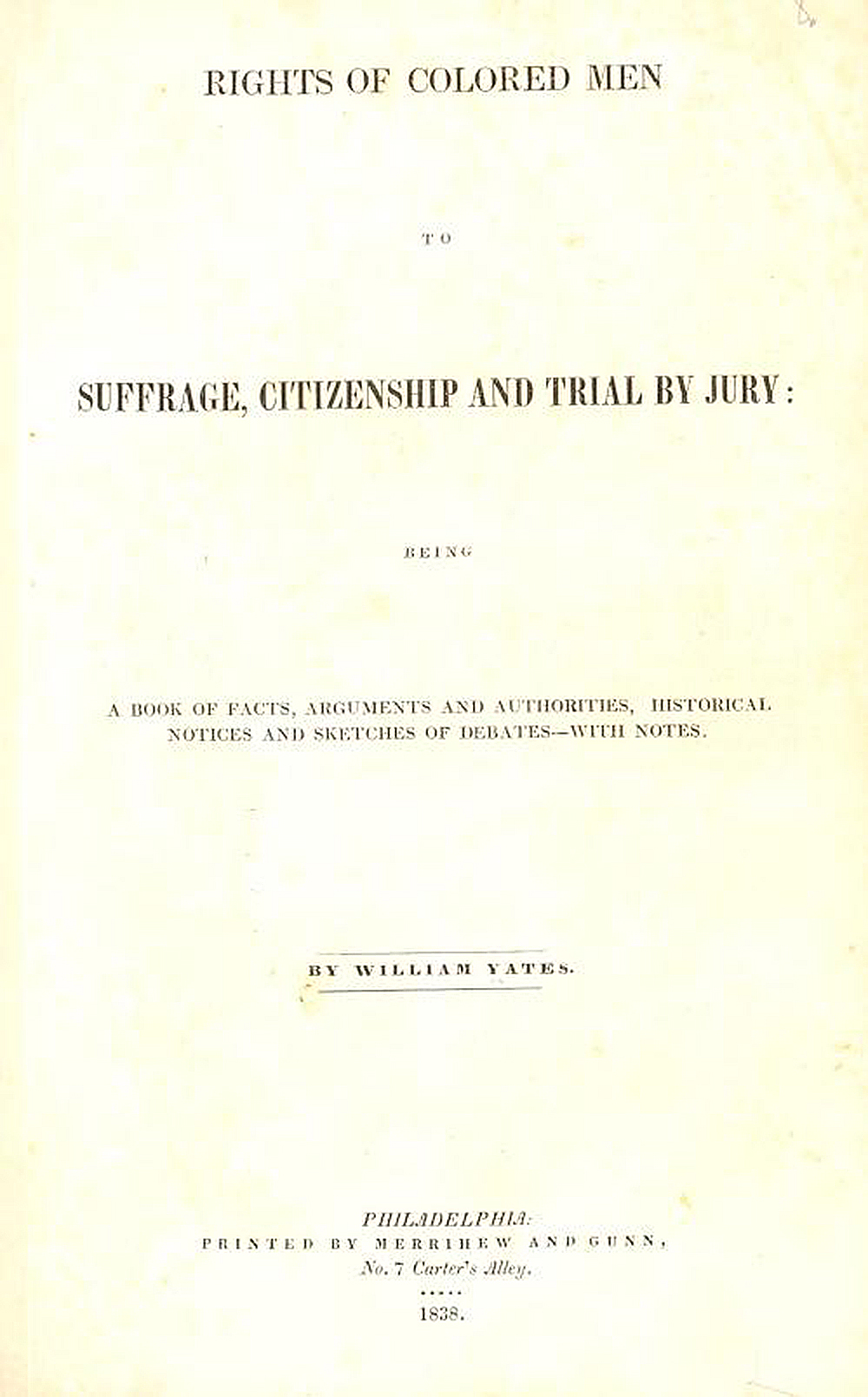 Yates successfully adopted legal culture’s own tools to such a degree that readers from the nineteenth century until today have regarded him as an authority on free blacks’ legal status. But Yates’ text was also a work of advocacy. Rights of Colored Men received prominent notices in the black and abolitionist press and could be purchased at local antislavery society offices. As a result, the work served as a probing legal treatise that fueled activist arguments.

Yates began with a story of the nation’s origins. The establishment of the United States, he said, had been at the outset a revolutionary, republican, and enlightened undertaking that was untainted by racism or distinctions among and between races. This had been possible in the wake of the American Revolution because the founding generation knew firsthand the contributions black people had made to independence, through military service and labor. American law had originally been color-blind, as evidenced by the absence of racial distinctions in founding documents, such as the federal and state constitutions. Change came in the early nineteenth century, at the fault line between generations. A forgetting occurred, Yates posited. Lawmakers of the early republic did not know how black people had contributed to the nation’s founding and hence were entitled to the privileges and immunities of citizens.

Most powerful was Yates’ argument about how law, though suffering from amnesia, could be made right. The same instruments that had woven racism into the nation’s legal fabric—courts, conventions, and legislatures—could now be used to recraft it. With the restoration of revolutionary-era memories would come the reestablishment of racial equality. Lawmakers needed only to recall the past to restore racial justice, and Yates’ treatise aimed to be an agent of that remembering.

Looking back, it is easy to conclude that Yates’ ideas were naive. His faith in the power of historical knowledge, on the one hand, and the malleability of antiblack racism, on the other, seems like a misreading, given what we know of the rise of anti–free Negro thought and legislation in the 1840s and 1850s. But from Yates’ point of view in 1830s, he had prominent lawmakers who were sympathetic to his view. He built his arguments on the published opinions of judges, legislators, and constitutional framers who also advocated that free black Americans had rights. Yates amplified their ideas, giving them visibility and volume, all the while hoping he might help convert others to an affirmative position on black citizenship.

Yates made a bold claim: Free black Americans could not be removed—banished, excluded, or colonized—from the borders of the individual states or the United States. With this he confronted headon the thorniest legal question of the antebellum period: Were free African Americans citizens with a claim to place? His answer was yes. Citizenship, he wrote, was distinct from political rights. It “strikes deeper” than, for example, the right to vote. Denied the status of citizens, free black people were not secure in their “life, liberty, and property,” or what he termed “personal rights.” At its core, citizenship was a claim to place, to enter and remain within the nation’s borders. Citizenship, Yates believed, would protect free black people from expulsion. 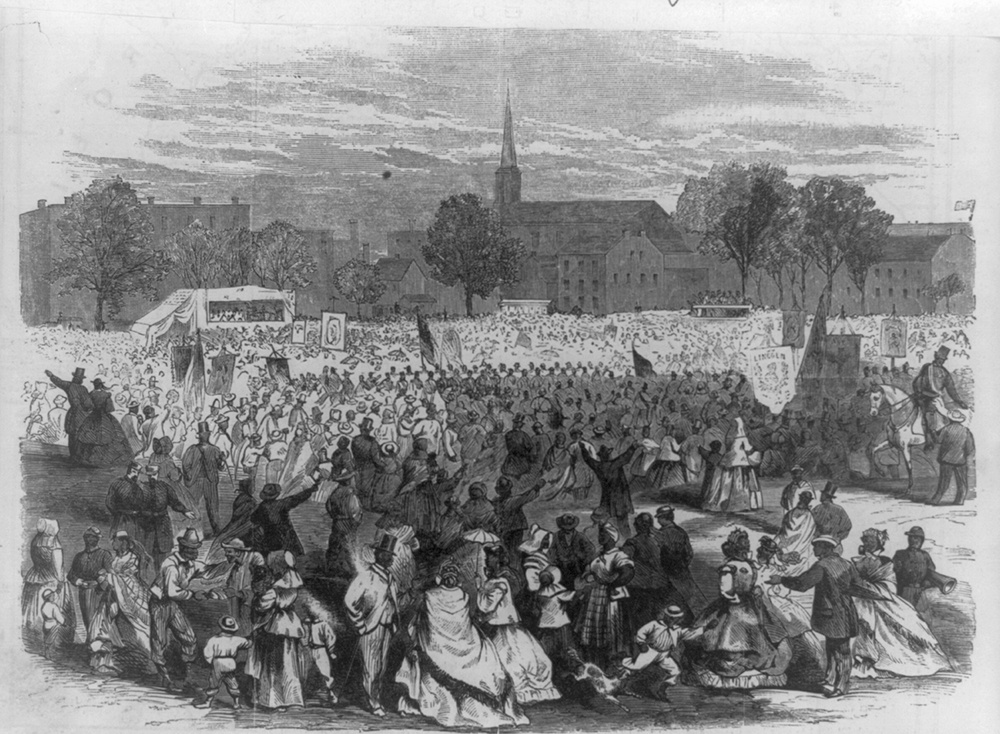 Yates adopted his most authoritative tone when discussing citizenship. The sections of his treatise on the vote and jury service leaned heavily on the published words of lawmakers. His discussion of citizenship was original, a structured synthesis that brought together a close reading of the Constitution with congressional debates and learned commentary. He began with four broad principles. First, no authority countered the view that free people of color were citizens, as contemplated by article 4, section 2, clause 1 of the Constitution. They were thus entitled to the “privileges and immunities of citizens.” Nothing in the common law of England, the principles of the British Constitution, or the Declaration of Independence recognized a distinction of color. Second, public-law jurisprudence recognized two classifications of persons: citizens and aliens. All those born within a jurisdiction were citizens with an allegiance to the state that demanded both obedience and protection.

Third, to be deprived of the vote did not mark one as a noncitizen; nonpropertied men, women, and children were citizens even though in some jurisdictions ineligible to vote. Fourth and finally, Yates rejected any analogy between the status of free black people and that of Indians or slaves. The legal position of Indians was murky, though largely, he thought, governed by treaty and related law. Slaves were property and categorically not citizens. 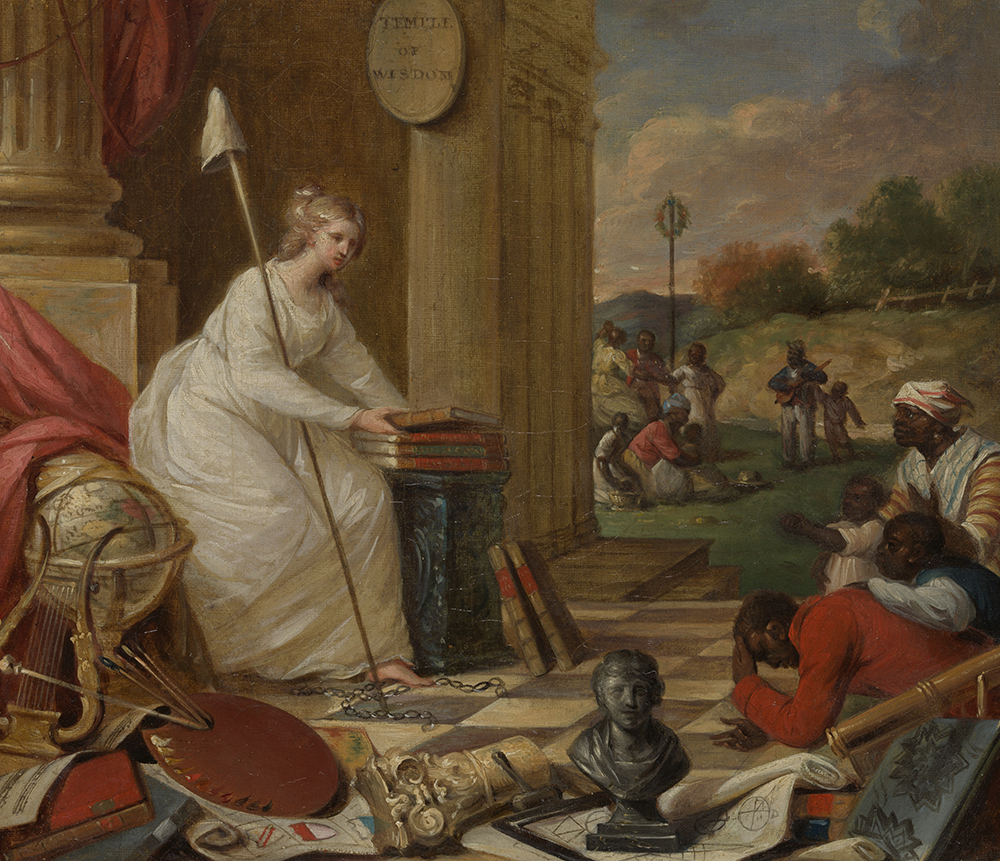 Rights of Colored Men remained an influential text throughout the antebellum years. Other antislavery and African American activists would come to publish their own arguments about free black men and women as citizens. But few would adopt a form more cloaked in legal authority than that of the treatise. Yates’s text fueled understandings of the role that law might play in claims for free black rights. It was also an example of how formal lawmaking by white men was connected to the vernacular legal culture of free black communities. Yates made a record that suggests how close to agreement highly placed lawmakers and free African American activists could be in their thinking. Yates and his treatise were forgotten after the Civil War, as was the threat of removal that so concerned him. The Civil Rights Act of 1866 and then the Fourteenth Amendment made clear that those who were U.S.-born were citizens, whether they were formerly free or formerly enslaved. Persons born in the United States were citizens of the United States and of the individual state in which they resided. The Civil Rights Act underscored that birthright was independent of “race, color, or previous condition of slavery or involuntary servitude.” It was a momentous turn of events by every measure. Birthright citizenship, a principle that African Americans had long argued was embedded in the Constitution, was affirmed. Yates’ treatise survived but only in a literal sense, as a bound text tucked away on shelves that lined parlors and libraries.

I was destined to return to Rights of Colored Men in researching my book. It is a singular text: the only nineteenth-century treatise devoted exclusively to the status of free African Americans. As I began my research, I dug deeper into Yates’ story and initially found little more than previous experts had a half century earlier. Yates first appears in 1831, founding an upstate New York newspaper, the Troy Press.

He was an antislavery agent in 1833 and can be found among the delegates to many local and national conventions. Yates conducted research for his treatise, visiting libraries and black communities between 1835 and 1837. With the publication of Rights of Colored Men, he became a familiar figure in African American religious and political gatherings. And then Yates receded from public life.

Poring over newspapers, I came upon the unexpected. There was William Yates in the pages of the black-edited San Francisco Elevator. A review of William Wells Brown’s 1863 book, The Black Man, bore his name. This makes sense, I thought. Yates had migrated west and was still engaged with print culture and black politics. I continued my search with a working hypothesis in mind. Yates had migrated to California, as had many from the East after 1848. Yates had maintained an active interest in the rights of free black people and, in his characteristic way, was so deeply involved that he even wrote for the black press. It was a good hypothesis. But it could not have been more wrong. 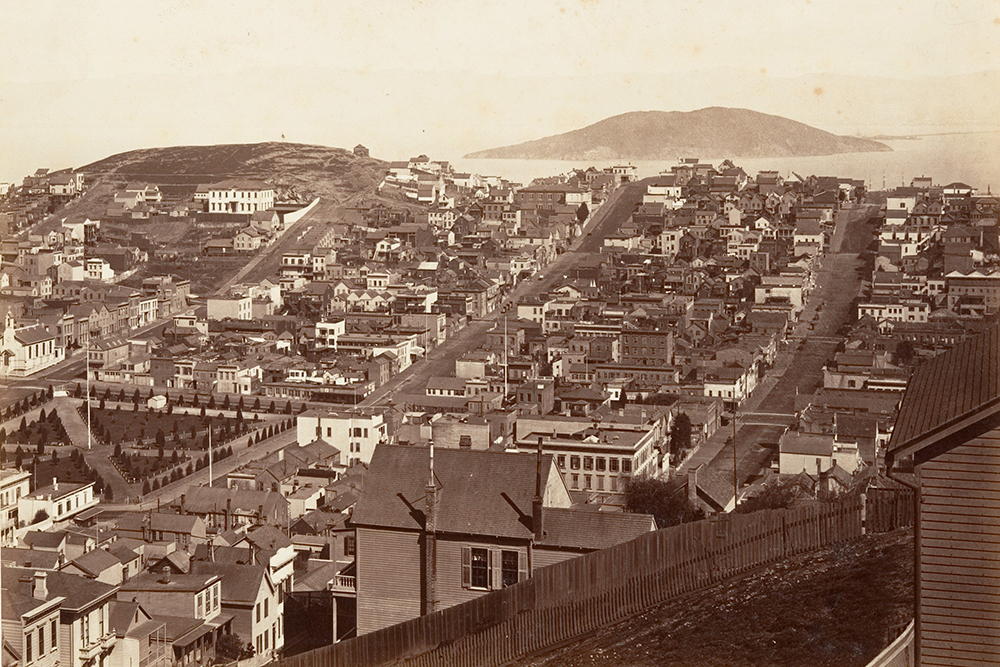 My error was rooted in a simple fact. There had been two men named William Yates. The Yates who penned the Elevator review and the one who authored Rights of Colored Men were not one and the same. Still, their stories had parallels. Both had been involved in antebellum black politics and devoted their public lives to securing the rights of free people of color. Still, they could have not been more different. William Yates the treatise writer had been a gentleman of some means, enough to sustain himself as a volunteer for the antislavery movement. His institutional home had been the American Anti-Slavery Society, in which black men were marginalized in the 1830s. And he had been white.

William Yates the reviewer for the Elevator was born a slave and had an equally important story to tell about the history of race and rights. From Virginia, Yates purchased his freedom, migrated to Washington, DC, and began working as a porter at the U.S. Supreme Court. He had a legal education, the kind acquired through the negotiations that secured his liberty and through observing the goings-on in the nation’s high court. Yates understood the law of slavery and of freedom. His labors earned him enough to secure the manumission of his wife, Emeliner, and their three children. In the early 1850s Yates had moved to San Francisco, where he became a public figure.

As a columnist for the African American–owned newsweekly the Elevator, writing under the pen name “Amigo,” Yates was able to circulate his ideas widely. Yates led California’s black political conventions as a man “possessed of great natural strength and ability” whose reputation was so widespread that “during the last days of a legislative debate, a state assemblyman would rise to support the right of black testimony by mentioning the name of William Yates as a man whose testimony would be as valid as any man’s.” The former slave made his mark on the very terrain that the treatise writer had once occupied: in newspapers and at black political conventions. He was also a man of action. Yates led a mid-1850s challenge against a state law that barred black testimony against the interests of white people. In 1865 he headed the black state convention’s committee on voting rights. His focus remained steadily fixed on the contours of black citizenship.

The discovery of a second William Yates is more than coincidence. Black Americans can serve as our guides through a history of race and rights. Never just objects of judicial, legislative, or antislavery thought, they are what drove lawmakers to refine their thinking about citizenship.

Martha S. Jones is the Society of Black Alumni Presidential Professor and Professor of History at Johns Hopkins University and a co-president of the Berkshire Conference of Women Historians. She is the author of Birthright Citizens: A History of Race and Rights in Antebellum America and All Bound Up Together: The Woman Question in African American Public Culture, 1830-1900.