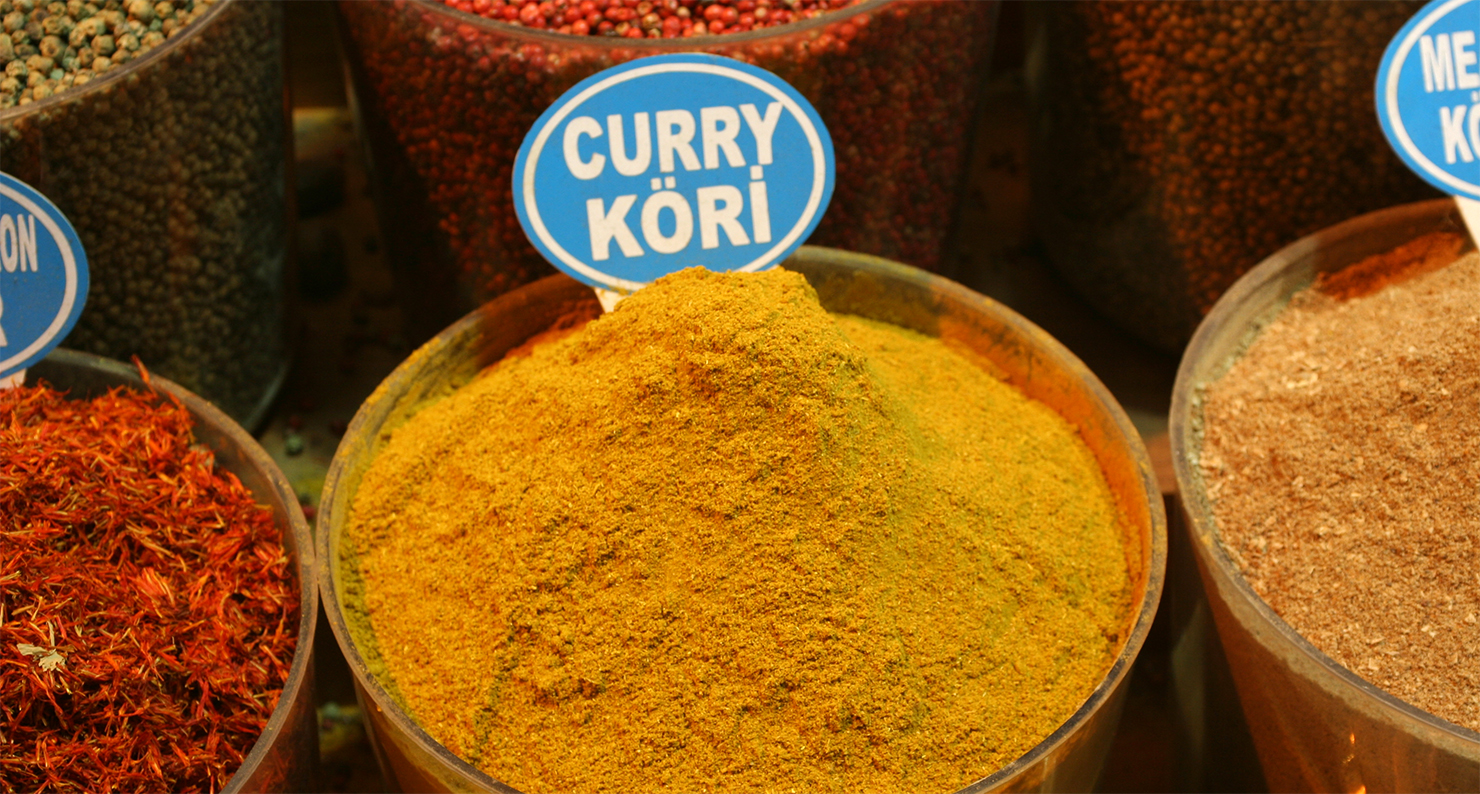 Curry in a spice-bazaar, Istanbul, Turkey, 2005. Photograph by Thomas Steiner.

A curry soup was sometimes served in an old friend’s manor in Northamptonshire, England. It was the cook’s special. I loved it. A thick, aromatic combination of chicken broth and confectioned curry powder, with small onions, some raisins I think, possibly some brown sugar, and other ingredients I no longer recall. Very simple, assured the cook, an elderly lady who had worked for my even older friend and lived with her in that house for decades.

But I never understood how this peculiar soup was created, nor did I ever find out where the recipe came from. And I still wonder why I loved it so—it might strike a culinary purist as objectively distasteful. One could perhaps categorize it amongst those hybrid dishes born out of the meeting of Britain and India and adapted to the British palate, like kedgeree, or mullagatawny, or chicken tikka masala, but this was no restaurant dish; it belonged only to that house, to those dinners in the large dining room overlooking the gardens and the deer park beyond.

I have actually forgotten the taste of that soup. Too many years have passed, and this was no madeleine. (My friend, an eminent scientist, happened to maintain that the madeleine triggered memories in Proust because of the vanilla in it, which apparently contains an alkaloid compound she researched called pyrazine that plays an important role in memory.) Nor do I wish to try reproducing it—no point in doing that outside the manor, whose wondrously crumbling interiors did not survive my friend’s death some years ago.

Even though I did once invent an Indian risotto, when I cook Indian food I prefer authenticity (and freshly ground spices), just as when I cook Italian food. I would not use prepared pasta sauces. And I never buy “curry powder,” which seems to stand in direct contradiction with all that is great about Indian cooking, that is, the elaborate use of dozens of types of spices in an infinity of possible combinations and proportions, dependent on the dish, the region, the houshehold, the time of year and time of day. A “curry” is a vegetable or meat or fish cooked in a sauce whose flavors are in large part determined by the spices used, by their proportions and cooking times. Curry powder is to Indian cooking what industrial pasta sauces are to Italian cooking.

And yet what is “authentic” food? Surely that curry soup was authentic to its place, a product of a particular, local history. Cuisine is a local affair, mostly. And it evolves within places. It isn’t about origins. Chili peppers may have originated in south America, but that does not mean that their use in Asian cuisines, or indeed in southern Italy, is inauthentic. Cook a dish in the same way for a few generations, and it will become “authentic.”

Italian cooking is a case in point. Most of what we know today as “Italian” is peasant cooking, specific to region, town, parish. Italians tend to be cooks rather than chefs—they repeat household recipes rather than invent new ones. But there was a time, before the late nineteenth century, when upper-class Italian cooking depended on French traditions, on elaborate condiments and the extensive use of spices. Italians have forgotten about spices now. But they cling on to what they believe to be their traditions, however recent these traditions may happen to be. And it is fair to say that experiments and combinations are not the forte of countries whose culinary traditions are rich, the beneficiaries of a long social and agricultural history. (This history is multiple, however. As with language, national cuisines are replete with borrowings from invaders.)

The variety of produce in Italy explains to some extent the regionalism of its cuisine: authenticity there means truth to regional tradition. The Bolognese do not make their tortellini in the same way as the Ferrarese. And the differences are reinforced insofar as Italians are adamant about rules, rigid about what is “not done” for no reason external to the rule. Some rules apply everywhere: throughout the peninsula you will be reprimanded for eating pasta after soup, for instance, since pasta is traditionally a minestra, a sort of soup really. This is because, once upon a time, pasta was eaten scotta, over-cooked and soupy, in a way that would seem shocking and “not done” today.

So what looks absolutely authentic is in fact a mirage of stability. It is at once the node of what seems eternally unchanging, and the locus of change. With food, history always proves the authenticity buff wrong in myriad ways, and shows up the inflexible cook as an impoverished one. One should never forget that dishes are the outcome of historical accretion and accident, that they constantly evolve.

Authenticity itself has a way of changing its colors. I have thought a lot about this because I grew up in France, but ate a hybrid sort of cuisine then, since my mother was born into middle-eastern foods but grew up in New York. I had no idea which national tradition to start with. I was no steak frites girl, but nor could I only live on labneh and za’atar, or tomato, olive oil and oregano on bread.

I started cooking in my late teens while living in England, at a time when “fusion” cuisine was fashionable there (and not yet called “confusion” by restaurant reviewers), even though the local fare, the average “pub grub” still consisted of a baked potato with cottage cheese. This was before the advent in pubs of the “Thai” green curry equivalent of curry powder, and before the rather more welcome gastropub became all the rage, as it has over the past decade. In the early 1990s I occasionally ate at curry houses, becoming convinced that “Indian” food was monolithic, monochrome, heavy, greasy, and indigestible, confusing a rich, multihued and hugely varied cuisine with bad northern fare, industrial chicken bathed in luridly colored, pre-packaged kormas or vindaloos.

Then, times changed, and the economy, and restaurants, and perceptions. I also began to frequent Italians, and quickly learned how to cook like them, learning tricks from everyone—eventually marrying a Roman-bred man. I learned about what was done, and not done. I also learned about proper, indeed authentically Indian (as opposed to authentically British) food, as good restaurants began multiplying in London, and in New York, offering regional dishes cooked by proper chefs for the sake of fine palates rather than for the beer-swilling pot-bellied of yore.

By the start of the twenty-first century, the search in the Anglo-Saxon world for the original dish, the ingredient local to an exotic place, the re-invention of local cuisines for the sake of rootless sophisticates was on—in good part because local traditions were comparatively poor, and unsatisfactory. By contrast, the Italians and the French did not care for re-invention particularly, and still don’t. (One could probably say the same for those born into any of the world’s great cuisines, in which I would include, from West to East, Mexico, Morocco, Turkey, Lebanon, Iran, India, China, Thailand, Japan).

But they care about rules. They may find it odd to see those international gourmets eat pasta with a spoon, and drink cappuccinos after lunch—an Italian no-no; or cut their lettuce leaves and eat their steak well done—a French no-no. I did get upset when an Italian, herself an excellent cook (of Italian food), was unable to use chopsticks in a Japanese restaurant and began, horror of horrors, cutting sushi with a knife—a clear case of double standard on the part of those who will not tolerate a stranger wielding a spoon with their spaghetti.

Perhaps authentic cuisine requires its eaters to be able to claim as theirs what they were not born into, not merely to be gastronomic tourists. Yet those who have no serious tradition of their own have no choice but to fall back on what other culinary cultures give them. Here lies the paradox of authenticity: it is taken for granted by those born within old culinary traditions, but pursued precisely by those for whom the “local” is reduced to the farmer’s market, and who live in metropolises where foods from all over the world are available day and night.

I thrive within this paradoxical state of affairs. But there is such a thing as a cook who knows too much. The creator of the curry soup was not one of those; and I cherish her memory.

Noga Arikha is the author of Napoleon and the Rebel, a biography of Lucien Bonaparte coauthored with Marcello Simonetta, and Passions and Tempers: A History of the Humours. She is a member of the Lapham’s Quarterly editorial board.