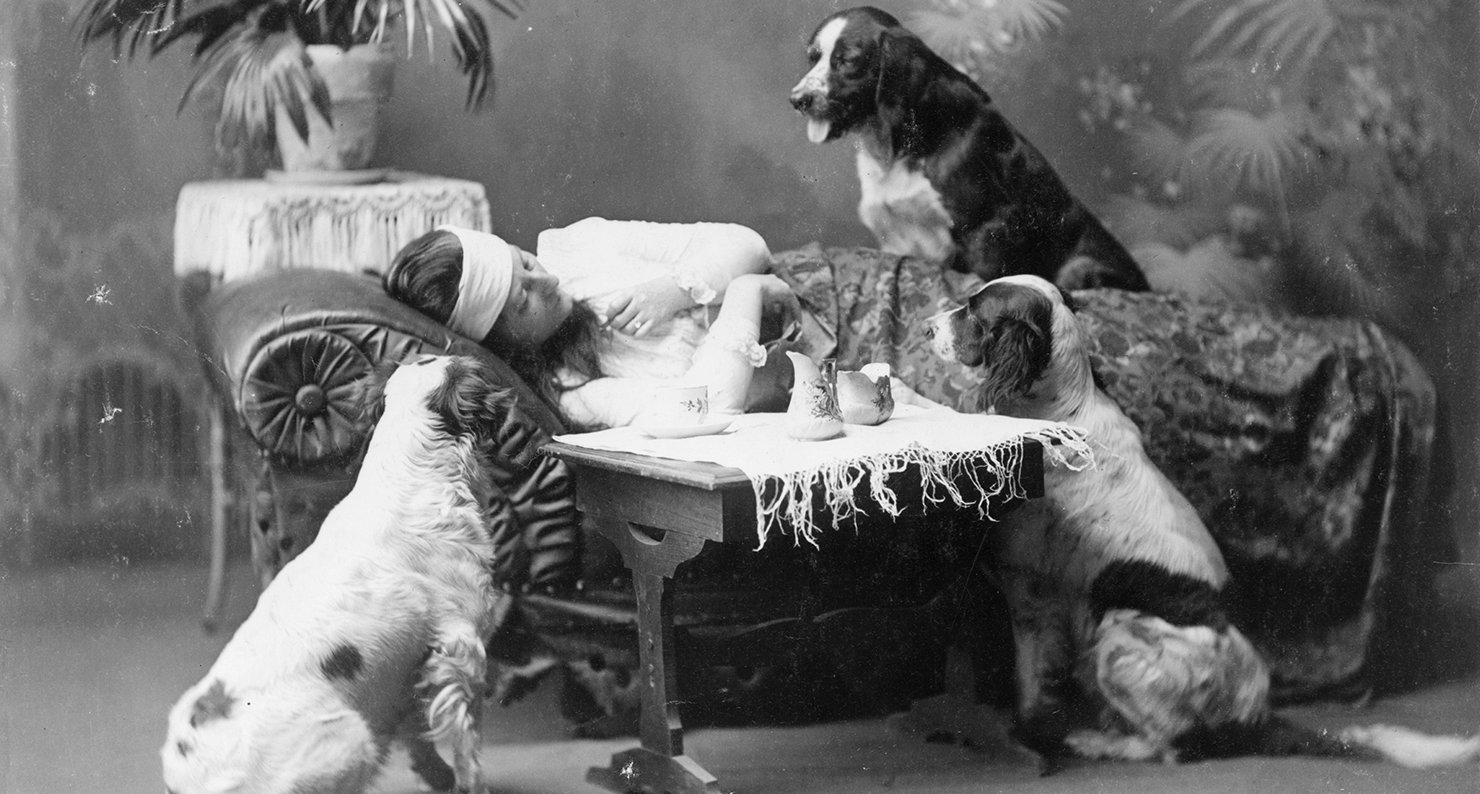 Woman, who appears to be ill, lying on couch, with three dogs looking on, c. 1903. Library of Congress, Prints and Photographs Division.

News of the warrant for her arrest in 1829 for being an “evil-disposed person” suddenly placed notorious journalist Anne Royall, godmother of the muckrakers, in the center of attention of a media circus in Washington, DC. The banter over her fate had already begun. The confusion over the federal indictment—prompted in part by satirical one-liners aimed at her Presbyterian neighbors on Capitol Hill—ensued: charges of being what ancient English common law called a common scold set the stage for a courtroom audience that wasn’t quite sure if it should be amused, or outraged, but certainly entertained.

Everyone understood the real charge: Anne Royall, as the exemplar of a disorderly woman, was walking to her witch trial for being a woman, one “with a serpent’s tongue.”

Written a little more than half a century after Anne’s trial, Alice Morse Earle’s Curious Punishments of Bygone Days provided some colorful examples of common-scold trials and the ducking stool, including a French writer’s account of his visit to an English town in 1700: “They place the woman in this chair and so plunge her into the water as often as the sentence directs, in order to cool her immoderate heat.”

Instances of this ancient punishment, of course, abounded over the centuries and across the British Isles. But its entrenchment within the American experience, dating back to the Jamestown settlement in Virginia in 1626, astonished a historian like Earle. “At the time of the colonization of America the ducking stool was at the height of its English reign; and apparently the amiability of the lower classes was equally at ebb,” she wrote. “The colonists brought their tempers to the new land, and they brought their ducking stools.”

Two centuries later, though, in Anne’s time, the common-scold offense and ducking stool had hardly become relics. In nearby Maryland, only ten years before Anne’s trial, a “spinster” named Jenny Lanman had been convicted for being a common scold after a constable testified that she had been “flogged over and over again with a very good cowhide” for her crime of being “noisy and troublesome,” but “he could not quiet her tongue, for the more he had whipped, the louder she had screamed, so he absolutely despaired of a cure.” The American Register detailed the punishment of ducking of Lanman till the “offender will hold her tongue.” In that same period, the superior court of Baldwin County, Georgia, convicted a “Miss Palmer” in 1811 as a common scold and sentenced her to three duckings in the Oconee River. She had been recorded as being “rather glib on the tongue.” In an attempt to save money, the sheriff, instead of building a ducking machine, apparently tied Palmer to the back of a cart and, accompanied by a hooting mob, ran the cart “down into the river.” According to accounts, she exclaimed “glory to God,” with each ducking.

Such drastic measures did not only take place in rural backwaters. Newspapers across the country recounted the trial of Catharine Fields in New York City, who was convicted for being a common scold in 1821. “The trial was excessively amusing, from the variety of the testimony,” according to a news report filed by the New York Commercial Advertiser, “and the diversified manner in which this Xantippe pursued her virulent propensities.” Newspapers dwelled on the “merriment” of the trial.

That element of entertainment, at the emotional cost of the convicted, had actually prompted a little soul-searching among New York spectators at an earlier trial in 1813. Once again erroneously assuming that “no indictment had been found” for a common scold in a hundred years, the Washington Daily National Intelligencer ran an article from the Commercial Advertiser on the trial of Margaret Mullen, who, “when irritated, was a most outrageous and violent scold.” Despite a number of witnesses, the jury found Mullen, a known alcoholic, not guilty.

Something else about Mullen’s treatment bothered the New York jury and packed courtroom. While the trial generated “much amusement,” the newspaper reported, it also caused some “anxiety to the female part of the audience; and some of them seemed to fear that this invasion of the rights of women might ultimately result in their being deprived of their principle weapon of offence as well as defence. And we congratulate them upon the defeat of this attempt to muzzle them.”

Compared to the partisan news portrayals, the Daily National Intelligencer remained decidedly neutral on Royall’s trial, though it clearly overlooked the fact that its front page had once aired concern over attempts to silence women in a similar common-scold trial a decade earlier.

Writing in the Boston-based North American Review in 1828, eminent jurist Caleb Cushing advanced these concerns over the “barbarity” of the ducking-stool punishment for convicted common scolds. Cushing reminded readers that the Supreme Court in Pennsylvania had actually struck down the offense of common scold as indictable, ruling it an unconstitutional act. Reported across the nation, and even in newspapers in England, was the story of Nancy James, who had been convicted by a judge in Philadelphia for being a common scold and sentenced to three duckings in a nearby river.

The timing of James’ trial in Philadelphia in 1824 should not have been lost on Anne, who had passed through Philadelphia in that period as part of the research for her first book, Sketches. She gushed about the city market, inspected the prisons and asylums, attended a Jewish synagogue as well as a Quaker meeting, took notes at Peale’s museum, met all of the local editors, and interviewed people on the street. In light of William Penn’s own persecution, she celebrated his statue on the “hospital square” in full Quaker dress: “Tolerance to all sects, equal rights and justice to all.”

According to Cushing, Pennsylvania’s Supreme Court in 1825 had “sufficient manliness to resist the attempt to revive the barbarous usage.” The court’s decision, in fact, obliterated the lower court’s process and issued a stunning rebuke to Philadelphia. Despite the “ferment and excitement in the public mind,” it ruled the decision was “cruel, unusual, unnatural and a ludicrous judgment.”

Adapted from The Trials of a Scold: The Incredible True Story of Writer Anne Royall by Jeff Biggers. Copyright © 2017 by Jeff Biggers. Reprinted by permission of Thomas Dunne Books, a division of St. Martin’s Press.

Jeff Biggers is an American Book Award–winning journalist, cultural historian, and playwright. He is the author of several works of memoir and history, including Reckoning at Eagle Creek: The Secret Legacy of Coal, which was the recipient of the David Brower Award for Environmental Reporting.