The early nineteenth-century cult of bibliomania was a bizarre episode, but one with long-lasting consequences. It culminated in the famous sale of the library of the 3rd Duke of Roxburghe, conducted by the auctioneer Robert Harding Evans, which took place in the dining room of Roxburghe’s house in St. James’ Square in June 1812. By then the duke had been dead for the best part of a decade. Contemporary gossip believed him to have been a shy and retiring man who had turned to book collecting having been disappointed in love.

Antiquarian book prices had climbed to unprecedented levels over the previous twenty years, but spectators nonetheless gaped as assorted aristocratic collectors and their agents pushed the bidding ever higher, and Roxburghe’s books sold one after another for astonishing prices. The fifteen Caxtons attracted special attention, and were pursued with particular determination by the 2nd Earl Spencer, well known as the greatest British book collector of the age. The climactic moment was reached with the sale of the so-called Valdarfer Boccaccio, Roxburghe’s copy of the editio princeps of the Decameron printed in Venice by Christoph Valdarfer in 1471, a copy then believed to be unique. It was routed by Spencer’s librarian the Reverend Thomas Frognall Dibdin with slovenly (but characteristic) illogicality as “the very scarcest book that existed.” Those present were nor disappointed by the spectacle which followed. 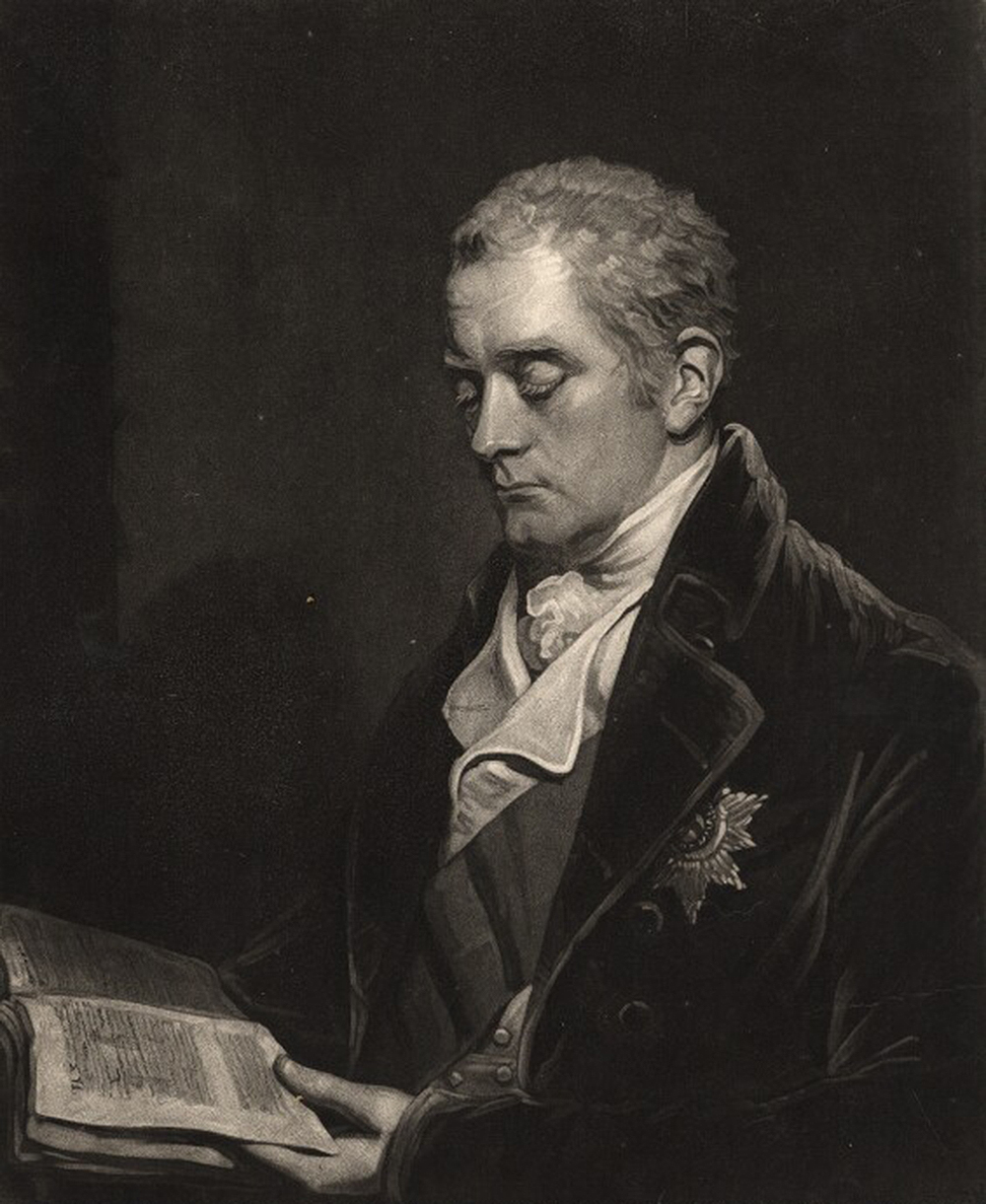 It was well known that the chief competitors were likely to be Spencer, the Marquess of Blandford, and the twenty-two-year-old 6th Duke of Devonshire, who had succeeded to the ducal title less than a year before. Dibdin could not resist describing the competition in terms of a chivalric tournament, and his account is full of talk of champions, battle axes, blows, and skirmishes. More disturbingly in the context of the rimes (the Roxburghe sale occurred just a few days before Napoleon’s Grande Armée marched into Russia), Dibdin’s account is also packed with references to generals, guns, and the effusion of blood. After the initial forays of the lesser contenders, the field was left open to the big three, and “the champions named stood gallantly up to each other resolving not to flinch from a trial of their respective strengths.” Events then took a dramatic turn, as described by Dibdin:

“A thousand guineas” were bid by Earl Spencer—to which the Marquis [Blandford] added “ten.” You might have heard a pin drop. All eyes were turned—all breathing well nigh stopped...every sword was put home within its scabbard—and not a piece of steel was seen to move or glitter save that which each of these champions brandished in his valorous hand. See, see!—they parry, they lunge, they hit: yet their strength is undiminished, and no thought of yielding is entertained by either…“Two thousand Pounds are offered by the Marquis”…Then it was the Earl Spencer, as a prudent general, began to think of a useless effusion and expenditure of ammunition—seeing that his adversary was as resolute and “fresh” at the onset. For a quarter of a minute he paused: when my Lord Althorp [Spencer’s son] advanced one step forward, as if to supply his father with another spear for the purpose of renewing the contest. His countenance was marked by a fixed determination to gain the prize—if prudence in its most commanding form, and with a frown of unusual intensity of expression, had not bade him desist. The father and son for a few seconds converse apart; and the biddings are resumed. “Two thousand two hundred and fifty pounds” said Lord Spencer! The spectators are now absolutely electrified. The Marquis quietly added his usual “ten”...and there is AN END OF THE CONTEST! Mr. Evans, ere his hammer fell, made a deep pause—and indeed, as if by something preternatural, the ebony instrument itself seemed to be charmed or suspended “in mid air.” However, at length down dropped the hammer.

Sceptics scoffed when news of the sale emerged, the Times concluding that it was a “lamentably erroneous way of indicating the love of learning, to give immense prices for rare or old editions.” Even Dibdin, perhaps reflecting the disappointment of his patron Spencer, was prepared to admit that “the expectations formed of the probable price for which it would be sold, were excessive; yet not so excessive as the price itself turned out to be.” 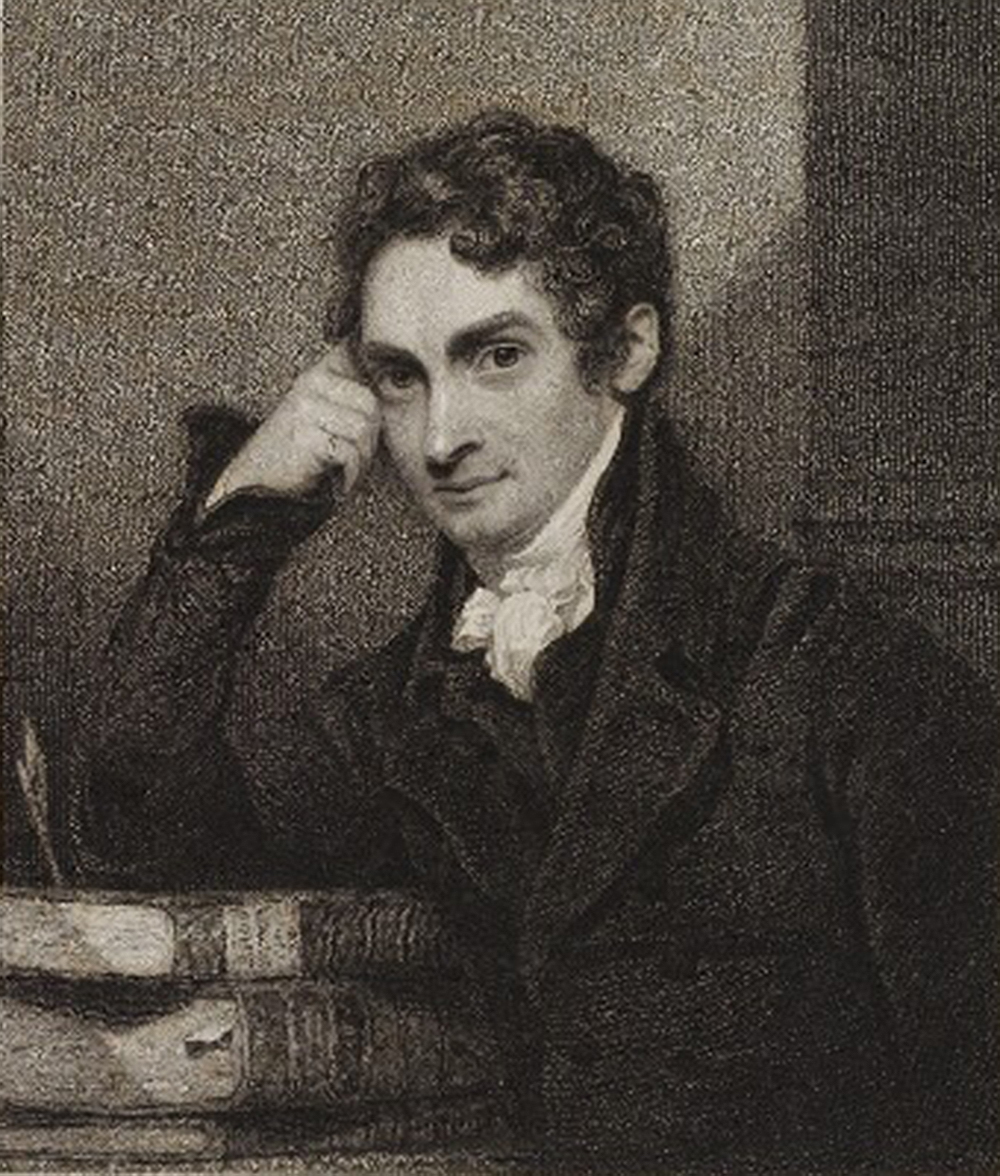 Even allowing for the tendency of the ignorant to misunderstand the scholarly value of early editions, it is difficult not to sympathize. Examined today in Manchester, the Valdarfer Boccaccio is an unremarkable-looking book in a gaudy gold-tooled binding by Charles Lewis. It seems an unlikely object of fixation, even allowing for the fact that we now know, as Blandford and Spencer did not, that other copies existed (today in Paris, London, and Milan—not all of them complete). Blandford’s successful bid of £2,260 was by the standards of the day a gigantic sum of money. Three months after the Roxburghe sale, Jane Austen sold the copyright of Pride and Prejudice for £110, and Mr. Darcy had an income of £10,000 a year. The morning after the sale, advertisements in the Times included one for a secondhand pianoforte (24 guineas) and another for the lease on a twenty-bedroom coffeehouse in the City of London (annual rent: £1,900). But ironically Earl Spencer was to have the last laugh. When the finances of the perennially extravagant Blandford collapsed in 1819, the earl was able to secure the Boccaccio for £918, less than half what Blandford had paid for it in 1812. The bubble had burst.

Bibliomania is inextricably associated with the name of Thomas Frognall Dibdin, born in Calcutta, a graduate of St. John’s College, Oxford, failed lawyer, and (from 1804) a clergyman of the Church of England. Dibdin’s career as the public bookman par excellence began with his Introduction to the Knowledge of Rare and Valuable Editions of the Greek and Latin Classics (1802), which brought him to the attention of the reading public and of Earl Spencer, who became his lifelong friend. His patronage helped launch Dibdin’s career as the author of a pair of best-selling “bibliographical romances”: Bibliomania (1809) and its sequel The Bibliographical Decameron (1817), as well as a never-completed new edition of Joseph Ames’ Typographical Antiquities (1810). Zealous in pursuit of his friend’s interest, he also took full advantage of this by publishing two detailed accounts of the Spencer collection, then not fully accessible to the wider public: his Bibliotheca Spenceriana and Aedes Althorpianae describe both the finest books and the building in which most of them were kept.

Bibliomania was in fact a coinage lifted by Dibdin from a satirical poem by the Scots physician John Ferriar, published in 1809. It also had French antecedents. In his 1802 Dictionnaire raisonné de Bibliologie the French librarian Etienne Gabriel Peignor had explained: “Bibliomania is the overwhelming compulsion to own books, not so much as to inform oneself as to possess them and feast one’s eyes on them.” The bibliomaniac was interested above all in editions, and bindings, either old or fine. These interests were, in essence, a disease of the mind, a futile, absurd, and ultimately self-destructive obsession. 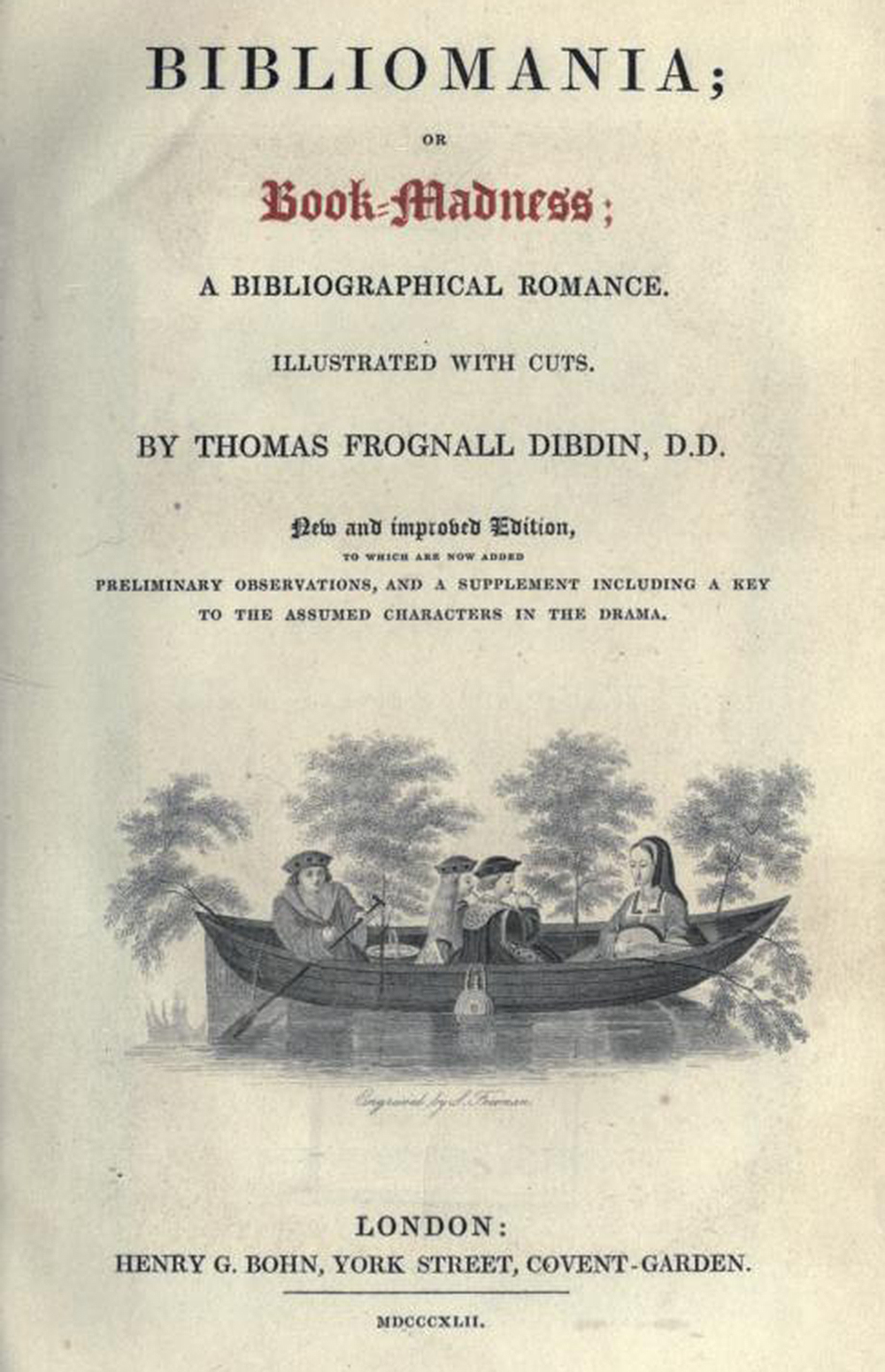 The opening lines of Ferriar’s poem had spoken of the “wild desires” and “restless torments” of “the hapless man, who feels the book-disease,” and most bibliomaniacs were, not unexpectedly, men. There were, however, certain exceptions. The Yorkshire collector Frances Richardson Currer owned a magnificent library at Eshton Hall. Her books were lodged in a splendid neo-Elizabethan drawing room there, and her two privately printed catalogues (1820 and 1833) suggest that she coveted her books quite as much as any male bibliomaniac. So splendid was Miss Currer’s library that it was said that Richard Heber intended to marry her for the books.

The original 1809 edition of Dibdin’s Bibliomania was little more than a pamphlet, a slender octavo of just eighty-seven pages. It was so successful that there followed a massively enlarged 1811 edition (782 pages), which was to all intents and purposes a new book. Based on Izaak Walton’s Compleat Angler, Bibliomania was Dibdin’s attempt to make a fashionable but potentially dry subject appealing, attractive, and—ultimately—saleable. Cast in the light of a Socratic dialogue between the callow young Lysander and the learned Philemon (Dibdin himself), with a large cast of pseudonymous characters, it attempted to summarize, in admittedly discursive style, everything that the aspiring collector might need to know. Dibdin’s rambling prose, gothic exclamations, and enormous parenthetical footnotes have for two hundred years been adored by some and regarded by others to be barely readable. But his books were popular, as the number of copies still on country house shelves shows. They set the agenda and reflected the times. 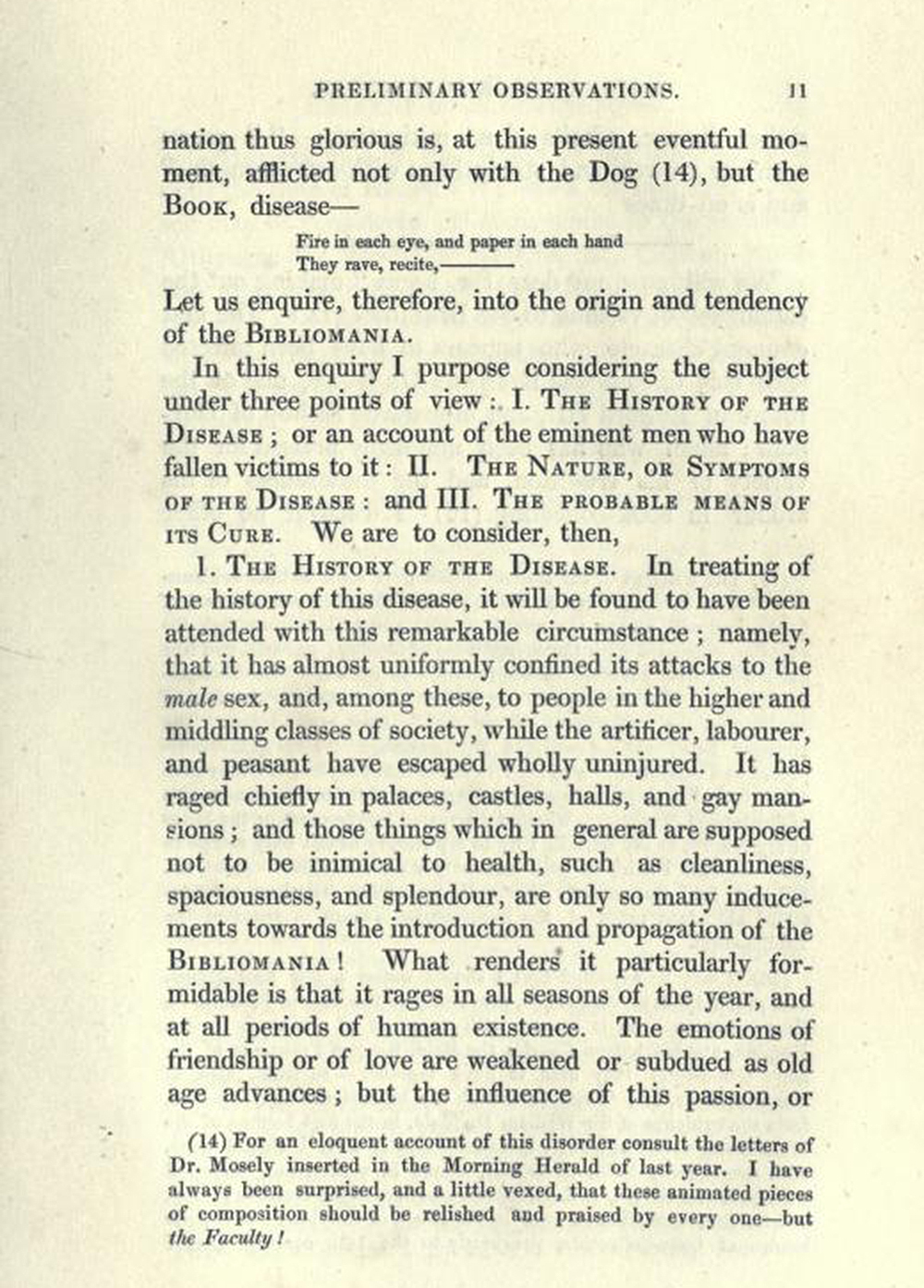 When it comes to explaining why bibliomania exercised the appeal that it did, it is too easy to stray into pseudo-psychology. While occasionally entertaining, this is also ultimately futile. Whether a passing fad, a psychosocial disorder, an addiction, or just another manifestation of aristocratic excess, bibliomania in all its various manifestations was a remarkably widespread phenomenon. The truly obsessive bibliomaniacs were small in number, but aspects of their approach to collecting remain influential two hundred years on. And if reactions to bibliomania have generally ranged from skeptical to hostile, it is clear that the activities of the bibliomaniacs are too easily dismissed as ignorant trophy collecting carried out by the very rich and very idle. Lord Spencer, for example, clearly knew how to collate an early printed book, while a list of the Aldines in the Bibliotheca Spenceriana, written in his own hand, suggests a more than superficial understanding of the collection. A similar impression emerges from Masterman Sykes’ catalogues of books at Sledmere. Writing in 1910, the 26th Earl of Crawford stressed that his father, the 25th Earl of Crawford, one of the great Victorian scholar-collectors, was not “satisfied with the mere possession” of books, but that “what he bought, he read and absorbed, thus blessed with a wonderful memory, acquiring an encyclopedic knowledge, constantly increasing and never forgotten.” Even the profligate Lord Blandford may be too easily dismissed as an extravagant dupe. The composition of his long-dispersed library and Blandford’s correspondence with other collectors together suggest a more subtle and nuanced interaction between collector and collected than has traditionally been assumed. Finally there is the simple fact that bibliomania resulted in the survival of books, perhaps ephemeral, implausible, or simply grubby and unprepossessing, which are now greatly valued, but which might not have survived at all if the bibliomaniacs had not, for reasons of their own, decided to take a fancy to them.

Dibdin listed eight principal symptoms of bibliomania. Ostensibly a light-hearted skit on the foibles of his contemporaries, like many skits before and since, it also served as an incitement for others and a manual of instruction for those keen to join the party but not quite sure what to do. Many parts of Dibdin’s diagnosis are immediately recognizable to any modern collector, highlighting themes and enthusiasms still readily spotted in any bookseller’s catalogue:

There is, first, a passion for Large Paper Copies; secondly, for Uncut Copies; thirdly, for illustrated Copies; fourthly, for Unique Copies; fifthly, for Copies Printed upon Vellum; sixthly for First Editions; seventhly, for True Editions; and eighthly, for Books printed in the Black-Letter.

Dibdin also drew attention to books for private distribution, to private-press books, to the desirability of condemned or suppressed books, to the bibliomaniac desire to collect all editions of a given work and to amass unusually large and voluminous books.

Not all of these are tastes prevalent in contemporary bibliophilia, but many are tropes immediately recognizable today.

Excerpted from The Country House Library by Mark Purcell, published by Yale University Press in association with the National Trust, in paperback September 2019. Reproduced by permission. Mark Purcell is deputy director of Cambridge University Library and was the former libraries curator to the National Trust.