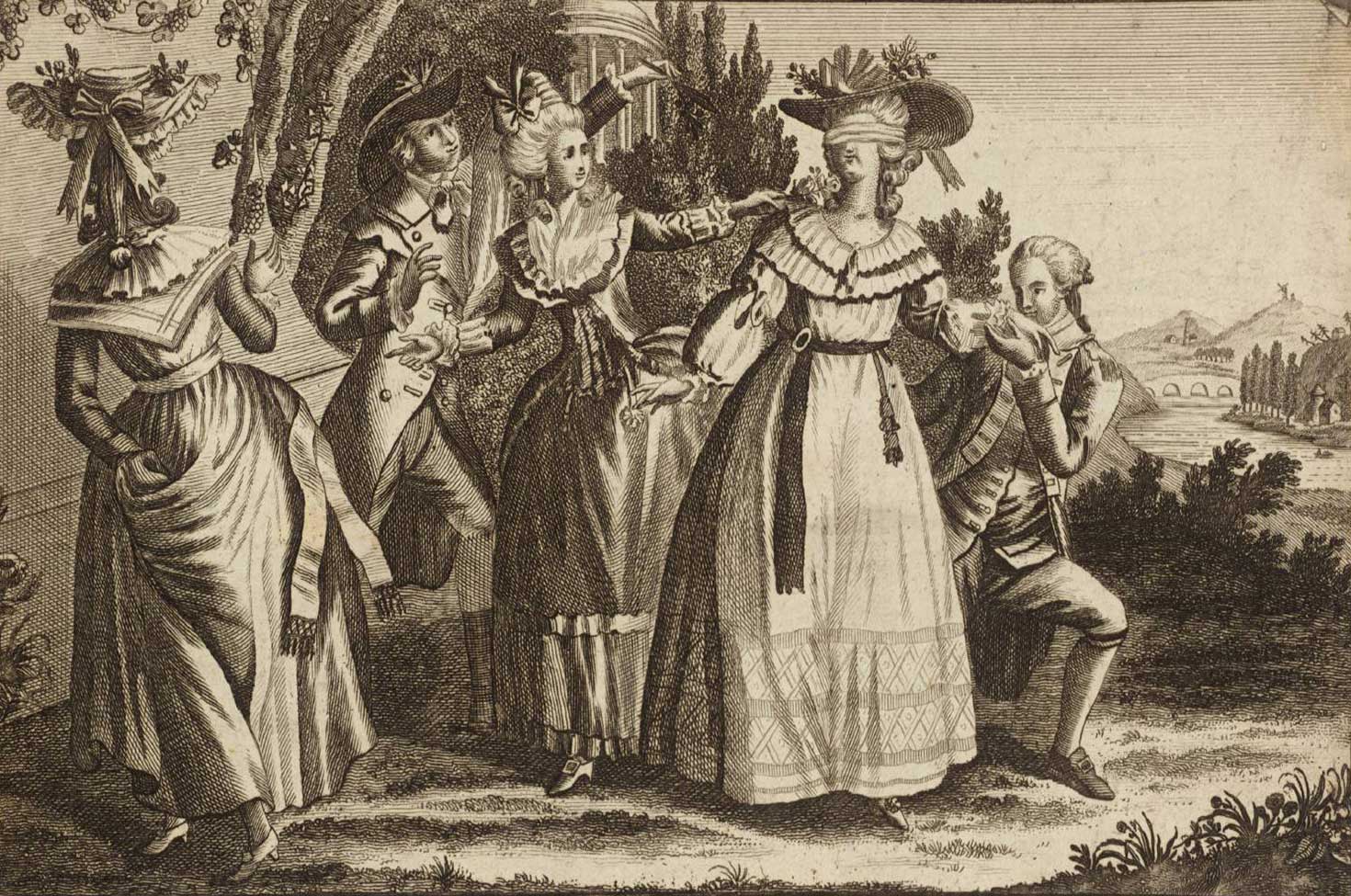 A Celebrated French Diversion in Which the Person Who Kisses Is Pointed Out, eighteenth century. Photograph © Tate (CC-BY-NC-ND 3.0).

A single binding at the British Library generated the thinking behind my book, What Pornography Knows. An unassuming duodecimo in brown calf, Cup.702.t.14 holds two titles, The History of the Human Heart (1749) and The Progress of Nature (1744), anonymous picaresques that narrate the sexual discoveries of adolescent characters.

Having resumed a proper posture, with wanton fingers they entered the mysterious cave, and heaved, and thrust, and riggled, till they opened the teeming springs, which shot their volatile liquids into a wine glass, each held in the other hand. But here the reader will hardly believe me…that what the glasses received was mingled with their wine, and drank off without the least shock to the nature of anyone present.

A long footnote nearly runs this action off the page. This note, rather than augmenting genital detail, takes a philosophical turn, disputing the common belief that feminine virtue is part of a natural social order.

The novel was first printed in 1749 in London by J. Freeman, publisher of many anonymous texts promising intrigue and topicality to the midcentury reader. It is exactly contemporary with John Cleland’s Fanny Hill but is less constant in its genital focus. It was reprinted many times. In 1757 the female ejaculation is deleted from the scene. It reappears in 1844. In 1885 it is gone again and remains omitted in a 1967 anthologized excerpt. But it returns in a 1968 pulp edition. This detail’s disappearance and reappearance work as evidence of pornography’s uneven relationship to women’s bodies, particularly their autonomous and active genitalia. These dancers withhold their bodies from penetrative contact and yet dazzlingly display and arouse their genital parts. At some points in history, it appears, the minute details of women’s self-administered sexuality can be countenanced, even enjoyed by pornography’s readers. At others, their extreme autoeroticism is incompatible with the genre’s sexual representations. Toggling back and forth between exposure and occlusion, the spectacle of the performers’ genitalia is not consistent across time, and neither is pornography’s attitude toward women’s self-governance—the discursive footnote also comes and goes across editions.

Human Heart’s long textual life suggests that its method of featuring sex acts—weaving spectacular genital episodes into a meandering and miscellaneous comic plot—was recognizable to generations of collectors and publishers as pornography. Yet the novel embodies a model of pornography that I believe has been effaced by historians seeking familiar pornographic conventions in works of the past.

Human Heart is held in several rare book archives, but its British Library binding affiliates it with other titles, providing key insights into pornography’s diffuse and pervasive history. Human Heart and Progress of Nature were bound sometime in the eighteenth century with other “Pamphlets and Poems Gallant,” as the binding still reads. It once held five works having to do with sex and marriage, as a manuscript table of contents tells us; two were by Eliza Haywood, known in the eighteenth century for her writings on love and passion. Today this volume holds only Human Heart and Progress. At some point, genital content distinguished these two works from the other three, which were removed by a collector who left the original “gallant” designation on the binding. The British Library, probably acquiring the volume in 1982, did not qualify it as pornography. It was therefore never put in the Private Case, a restricted collection of obscene literature established in the mid-nineteenth century. Instead, it was given a “cupboard” shelf mark, designating the texts as more loosely sexological.

Because of the contingencies of archiving, bibliography, and shelfmarking, Human Heart never was counted as pornography, never was held in the Private Case, and therefore it has sat largely unstudied, its highly associative, discursively various structure missed by scholars. Had its acquisition date been earlier, or had it been illustrated, or had its title page alluded to known pornographers, it might have landed in the Private Case or in the rubbish. What we learn from this binding is that in the mid-eighteenth century a pattern of candid sexual description across a work of prose fiction did not categorically distinguish it from a wider body of literature considering intimate life, nor was such a work expected to deliver sex scenes exclusively. Readers found Human Heart meaningful for centuries, as its republication history shows. It elicited various attitudes and usages, and its hybrid character made it marginal to bibliographers, malleable to editors, and invisible as pornography to librarians and researchers.

This example shows us that there is, in a sense, no archive of pornography. Ephemeral materials have been destroyed, false imprints defy attribution, digital media and print ephemera evade collection, and changing cataloguing procedures select and deselect material as pornography differently across time. The search terms useful to a researcher of pornography aren’t keyed into catalogues, and many materials haven’t been read closely enough by archivists to be classified as pornography in the first place. Rather than as an identifiable set of works, “archive” needs to be conceived as a set of practices through which we approach materials relevant to a pornographic history of sexuality. The Private Case, as rich a repository as it is, can obscure the reach and diversity of pornography, implying hard boundaries where there are none. Some researchers limit their pornography research to this collection, reproducing its exclusions; others believe pornography was once sequestered in libraries, then became more accessible and abundant under increasingly liberal collecting procedures. To the contrary, Human Heart—the narrative and the binding—exemplifies pornography as a renegade form, integrated and mobile among a heterogeneous textual culture. It suggests that the genre never was closed, sealed, or secret. Pornography defies parameters—it’s what the genre was designed to do. 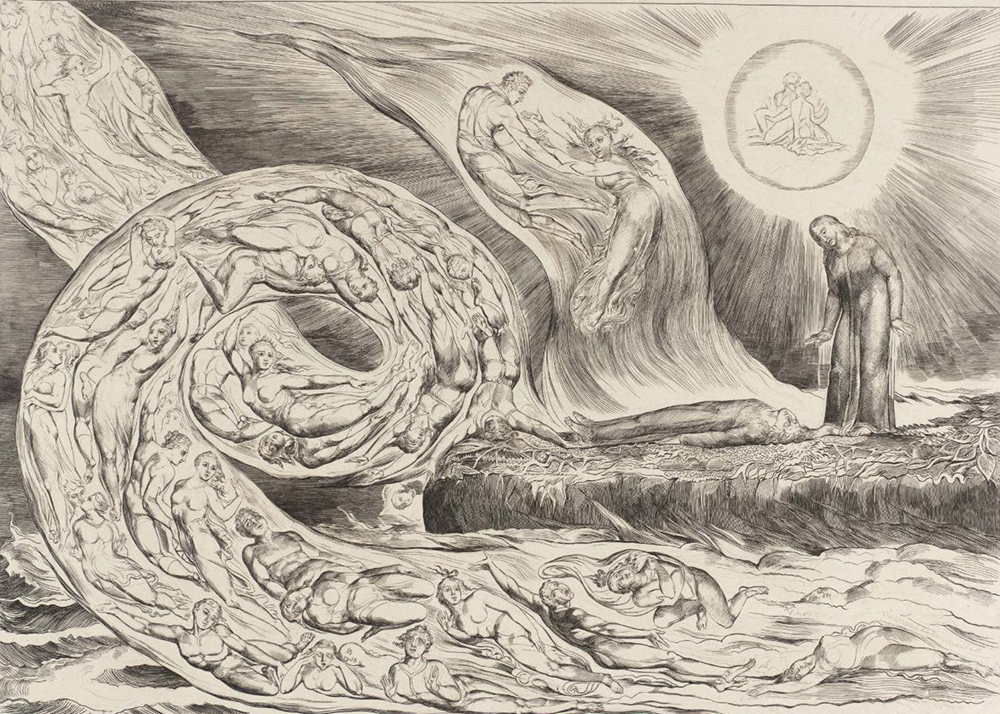 This kinetic quality makes pornography much like any other object of study—surprising, varied, unpredictable, and defamiliarizing—and it disconfirms Supreme Court Justice Potter Stewart’s oft-cited quip about knowing pornography when he sees it. Pornography is often not immediately perceptible as such; and, conversely, its genital spectacles regularly contain discourse and conversations that are easily lost if we dismiss them as mere obscenity or sensationalism. Close reading of rare texts—a slow, decidedly unsexy method—leads us to decadent sexual description but also to all the prose that intervenes: discourse and narrative and paratext that pose questions about social justice, elaborate on gender inequity, and concede that sexual violence is a common form of reining in women’s autonomy.

These discoveries refute assumptions that we know what we’ll find in pornography. For years, colleagues and friends have joked with me about my research—about suffering the judgment of prudish librarians, or keeping my hands on the table while I read, or asking if what I’m doing with those books really counts as (wink wink) “research.” These jokes express some hesitation about taking pornography seriously, but that is precisely what I think we should do. Careful and dedicated librarians have curated these materials and created conditions hospitable for consulting them with sufficient care that I was able to read, reread, and consider what they actually say, and what they actually say has made me understand pornography as a genre with a unique capacity to envision sexual justice. They contain theories of feminism, statements against sexual violence, and nonbinary alternatives to heteronormativity.

I’ve been able to arrive at these insights about pornography because libraries make working with pornography feel safe, professional, and serious. Some scholars perpetuate the misconception that such work makes them targets of oppressive regimes of surveillance, such as at the British Library, where readers must sit at designated tables in close proximity to library staff as they consult Private Case holdings. Allegations circulate that this restriction is a form of policing, an imposition of shame or self-consciousness. What these stories leave out is that a pornography researcher is likely to share a restricted table with a historian studying medieval music manuscripts; or an early modernist working with a Shakespeare quarto; or a specialist examining tiny eighteenth-century children’s books; or readers consulting unique letters, maps, contracts, or journals signed, annotated, or written by any number of historical figures—Jacob Tonson, Elizabeth I, James Cook, Samuel Coleridge, or Queen Victoria’s amanuensis, to name only a few possibilities. These days, Private Case holdings are restricted not because of a unique obscenity but because they are, like these other varied materials, extraordinarily rare. The librarian supposedly upholding a disciplinary regime is often at work cataloguing, consulting with researchers, or granting photography permissions, of which I’ve requested many, invariably to have them granted. In the nearly two decades I’ve been researching pornography in libraries, I’ve been asked only once—at the Kinsey Institute—to pause a VHS tape of an adult film as a campus tour made its way through the reading room (a reasonable enough request).

Libraries also can’t exact surveillance because they don’t always know which materials are pornographic. The researcher might just as likely encounter pornography in the unrestricted general area of the rare book room while reading what appears to be a run-of-the-mill comic novel, as I was when I first read Human Heart more than a decade ago. Little did I know it would immerse me in lavish sexual description and incisive social criticism.

Excerpted from What Pornography Knows: Sex and Social Protest since the Eighteenth Century by Kathleen Lubey, published by Stanford University Press, © 2022 by the Board of Trustees of the Leland Stanford Junior University. All Rights Reserved. 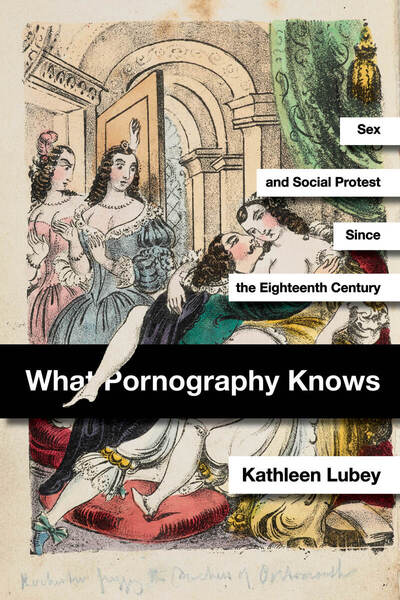 Kathleen Lubey is a professor of English at St. John’s University. She is the author of What Pornography Knows: Sex and Social Protest Since the Eighteenth Century and Excitable Imaginations: Eroticism and Reading in Britain, 1660–1760.