The Huns, having overrun the territories of the Alani, killed and plundered many of them and joined the survivors to themselves in a treaty of alliance. Then, in company with these, they made the more boldly a sudden inroad into the extensive and rich cantons of Ermanaric, a most warlike monarch, dreaded by the neighboring nations because of his many and varied deeds of valor. On learning of these unexpected events, Athanaric, the chief of the Thervingi, attempted to stand his ground. Still more through fear of what might come, he had walls built high, skirting the lands of the Taifals from the banks of the river Crisius as far as the Danube, thinking that by this hastily but diligently constructed barrier, his security and safety would be assured. But while this well-planned work was being pushed on, the Huns swiftly fell upon him and would have crushed him at once on their arrival had they not been so loaded down with booty that they gave up the attempt.

Yet when the report spread widely among the other Gothic peoples that a race of men hitherto unknown had now arisen from a hidden nook of the earth, like a tempest of snows from the high mountains, and was seizing or destroying everything in its way, the greater part of the people, who, worn out by lack of the necessities of life, had deserted Athanaric, looked for a home removed from all knowledge of the savages. After long deliberation over which abode to choose, they thought Thrace offered them a convenient refuge, for two reasons: it has a very fertile soil, and it is separated by the mighty flood of the Danube from the fields that were already exposed to the thunderbolts of a foreign war. The rest of the nation, as if with one mind, agreed to this plan.

Therefore, under the lead of Alavivus, they took possession of the banks of the Danube and, sending envoys to Emperor Valens, with humbly entreaty begged to be received, promising they would not only lead a peaceful life but would also furnish auxiliaries if circumstances required. While this was happening in foreign parts, terrifying rumors spread abroad that the people of the north were stirring up new and uncommonly great commotions: throughout the entire region that extends from the Marcomanni and the Quadi to the Pontus, a savage horde of unknown peoples, driven from their abodes by sudden violence, were roving about the river Danube in scattered bands with their families.

In the very beginning, this news was viewed with contempt by our people, because wars in those districts were not ordinarily heard of by those living at a distance until they were ended or at least quieted for a time. But when the belief in what had taken place gained strength and was confirmed by the coming of the foreign envoys, who begged with prayers and protestations that an exiled race might be received on our side of the river, the affair caused more joy than fear. Experienced flatterers immoderately praised the good fortune of the prince, which unexpectedly brought him so many young recruits from the ends of the earth that by the union of his own and foreign forces, he would have an invincible army. In this expectation various officials were sent with vehicles to transport the savage horde, and diligent care was taken that no future destroyer of the Roman state should be left behind, even if he was smitten with a fatal disease. Accordingly, having by the emperor’s permission obtained the privilege of crossing the Danube and settling in parts of Thrace, they were ferried over for some nights and days by companies in boats, on rafts, and in hollowed tree trunks; and because the river is by far the most dangerous of all and was then swollen by frequent rains, some who, because of the great crowd, struggled against the force of the waves and tried to swim drowned; and they were a good many.

With such stormy eagerness on the part of insistent men was the ruin of the Roman world brought in. This at any rate is neither obscure nor uncertain, that the ill-omened officials who ferried the barbarian hordes often tried to reckon their number but gave up their vain attempt; as Virgil, the most distinguished of poets, says,

Who wishes to know this would wish to know
How many grains of sand on Libyan plain
By Zephyrus are swept.

From The Chronicles of Events. A native of one of the Greek-speaking provinces of the eastern Mediterranean, Ammianus joined the Roman army as a staff officer in the mid-fourth century. Over the following years, the military campaigns of the emperors Constantius II and Julian took him to Gaul, Italy, and Persia. Around 370 he retired to Antioch but a decade later set out for Rome to write this Latin history of the empire spanning from 96, when the emperor Nerva took power, to Ammianus’ own day. Of the original thirty-one books, only the last eighteen survive. 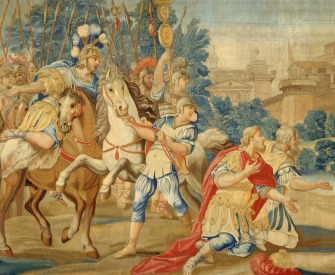 Upon returning home, Crusaders brought with them styles that would upset Europe’s fashion hierarchy. More