Memory, like a beauty that is always present to hear herself flattered, is flattered by everyone. But the absent and silent goddess, Forgetfulness, has no votaries and is never thought of; yet we owe her much. She is the goddess of ease, though not of pleasure.

When the mind is like a room hung with black, and every corner of it crowded with the most horrid images imagination can create, this kind speechless goddess of a maid, Forgetfulness, is following us night and day with her opium wand and gently touching first one, and then another, benumbs them into rest, and at last glides them away with the silence of a departing shadow. It is thus the tortured mind is restored to the calm condition of ease, and fitted for happiness.

How dismal must the picture of life appear to the mind in that dreadful moment when it resolves on darkness, and to die! One can scarcely believe such a choice was possible. Yet how many of the young and beautiful, timid in everything else, and formed for delight, have shut their eyes upon the world and made the waters their sepulchral bed! Ah, would they in that crisis, when life and death are before them, and each within their reach, would they but think, or try to think, that Forgetfulness will come to their relief and lull them into ease, they could stay their hand and lay hold of life. But there is a necromancy in wretchedness that entombs the mind, and increases the misery, by shutting out every ray of light and hope. It makes the wretched falsely believe they will be wretched ever. It is the most fatal of all dangerous delusions; and it is only when this necromantic nightmare of the mind begins to vanish, by being resisted, that it is discovered to be but a tyrannic specter. All grief, like all things else, will yield to the obliterating power of time. While despair is preying on the mind, time and its effects are preying on despair; and certain it is the dismal vision will fade away, and Forgetfulness, with her sister Ease, will change the scene. Then let not the wretched be rash, but wait, painful as the struggle may be, the arrival of Forgetfulness; for it will certainly arrive.

About the year 1766, I was in Lincolnshire, in England, and on a visit at the house of a widow lady, Mrs. E., at a small village in the fens of that county. It was in summer; and one evening after supper, Mrs. E. and myself went to take a turn in the garden. It was about eleven o’clock, and to avoid the night air of the fens, we were walking in a bower, shaded over with hazel bushes. On a sudden, she screamed out and cried, “Lord, look, look!” I cast my eyes through the openings of the hazel bushes in the direction she was looking and saw a white shapeless figure, without head or arms, moving along one of the walks at some distance from us. I quitted Mrs. E. and went after it. When I got into the walk where the figure was and was following it, it took up another walk. There was a holly bush in the corner of the two walks, which, it being night, I did not observe; and as I continued to step forward, the holly bush came in a straight line between me and the figure, and I lost sight of it; and as I passed along one walk, and the figure the other, the holly bush still continued to intercept the view, so as to give the appearance that the figure had vanished. When I came to the corner of the two walks, I caught sight of it again, and coming up with it, I reached out my hand to touch it; and in the act of doing this, the idea struck me: Will my hand pass through the air, or shall I feel anything? Less than a moment would decide this, and my hand rested on the shoulder of a human figure. I spoke but do not recollect what I said. It answered in a low voice, “Pray let me alone.” I then knew who it was. It was a young lady who was on a visit to Mrs. E., and who, when we sat down to supper, said she found herself extremely ill and would go to bed. I called to Mrs. E., who came, and I said to her, “It is Miss N.” Mrs. E. said, “My God, I hope you are not going to do yourself any hurt,” for Mrs. E. suspected something. She replied with pathetic melancholy, “Life has not one pleasure for me.” We got her into the house, and Mrs. E. took her to sleep with her. 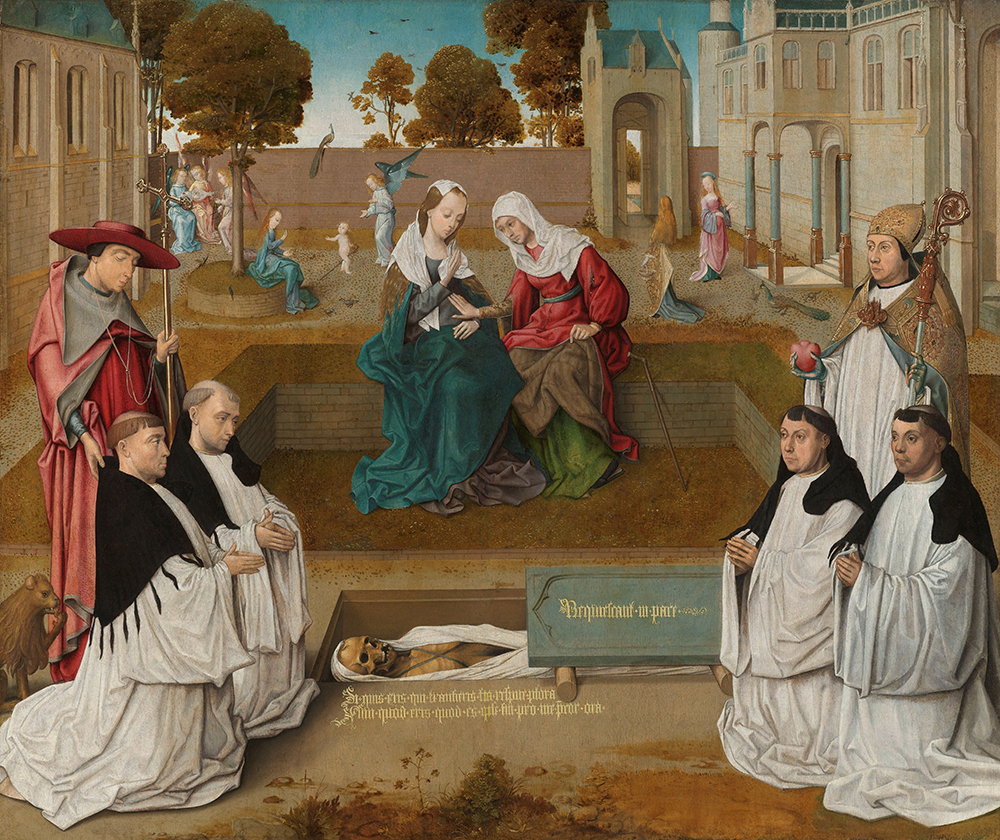 Four Canons with Saints Augustine and Jerome by an Open Grave, by the Master of the Spes Nostra, c. 1500. Rijkmuseum.

The case was, the man to whom she expected to be married had forsaken her, and when she heard he was to be married to another, the shock appeared to her to be too great to be borne. She had retired, as I have said, to her room, and when she supposed all the family were gone to bed (which would have been the case if Mrs. E. and I had not walked into the garden), she undressed herself and tied her apron over her head, which, descending below her waist, gave her the shapeless figure I have spoken of. With this and a white underpetticoat and slippers, for she had taken out her buckles and put them at the servant maid’s door, I suppose as a keepsake, and aided by the obscurity of almost midnight, she came downstairs and was going to drown herself in a pond at the bottom of the garden, toward which she was going when Mrs. E. screamed out. We found afterward that she had heard the scream, and that was the cause of her changing her walk.

By gentle usage, and leading her into subjects that might, without doing violence to her feelings, and without letting her see the direct intention of it, steal her, as it were, from the horror she was in (and I felt a compassionate, earnest disposition to do it, for she was a good girl), she recovered her former cheerfulness and was afterward a happy wife, and the mother of a family.

The matters here related, being all facts, are strongly pictured in my mind, and in this sense Forgetfulness does not apply. But facts and feelings are distinct things, and it is against feelings that the opium wand of Forgetfulness draws us into ease. Look back on any scene or subject that once gave you distress, for all of us have felt some, and you will find that though the remembrance of the fact is not extinct in your memory, the feeling is extinct in your mind. You can remember when you had felt distress, but you cannot feel that distress again, and perhaps will wonder you felt it then. It is like a shadow that loses itself by light.

From a letter. Addressed to Lady Smyth, the wife of an English banker living in Paris, this undated epistle was shown by Paine to a British politician who copied and published it after visiting the political philosopher in Paris in 1802. Lady Smyth had written to Paine under the pseudonym “Little Corner of the World” while he was imprisoned for treason in Luxembourg Palace. Paine had replied to his unknown correspondent as “The Castle in the Air.” After returning to England, Paine became close friends with Lady Smyth and her husband.