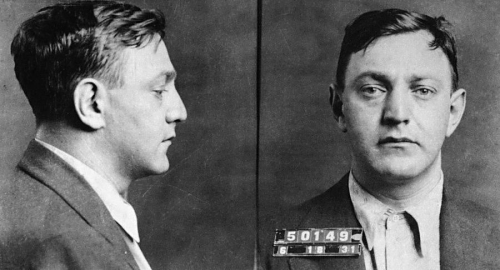 The 1931 mugshot of mobster and bootlegger Dutch Schultz.

• Carrying out the bootlegging legacy of Dutch Schultz: “Fatally shot in 1935 while urinating at the Palace Chop House and Tavern in Newark, Schultz was a noted gangster in a time of noted gangsters, when men such as Charles ‘Lucky’ Luciano and Benjamin ‘Bugsy’ Siegel walked the Earth. And, like many of his peers, Schultz had a lot of business interests, one of which was bootlegging, an activity which made a lot of criminals rich. Schultz was also, authorities later found out, running an underground distillery in Pine Plains, New York, that was largely forgotten until recently.” (Atlas Obscura)

• Speaking of illegal liquor: “There is evidence of alcohol legislation dating as far back as Hammurabi’s rule (1792–1750 BC) of the First Babylonian Dynasty. Russia first imposed taxes on booze in 1474, while Scotland was differentiating licit spirits from moonshine by 1494. In 1506, James IV claimed a monopoly on the monopoly and distilling of aqua vitae.” (Irish Times)

• Quotes misattributed to famous people are the scourge of the internet. One man is on a quest to set us all straight: "Mr. Sullivan offers 10 common ‘mechanisms’ that he says lead to misquotation and incorrect attribution. Through one such process, which he labels ‘textual proximity,’ a famous person mistakenly gets credit for a quotation merely by having their name or likeness published close to the words. In another, ‘ventriloquy,’ a statement about an individual’s work is perceived to be so apt that it is eventually confused for their own words.” (New York Times)

• Jill Lepore on Eleanor Roosevelt: “In the fall of 1932, when Eleanor Roosevelt was teaching American history at a high school for girls, editing a magazine called Babies—Just Babies, and helping her husband in the last weeks of his run for president of the United States by making a gazillion campaign stops—a speech here, a photograph there—the Associated Press assigned a political reporter named Lorena Hickok to follow her around. ‘She is, to use the expression of one of her friends,’ Hickok wrote, ‘a whirlwind.’ Roosevelt wore ‘ten-dollar dresses,’ refused the protection of the Secret Service, borrowed friends’ cars so she could drive herself, and on Sundays scrambled the eggs herself, at the table, in a chafing dish.” (Literary Hub)