In the tumultuous business of cutting-in and attending to a whale, there is much running backward and forward among the crew. Now hands are wanted here, and then again hands are wanted there. There is no staying in any one place, for at one and the same time everything has to be done everywhere. It is much the same with him who endeavors the description of the scene. We must now retrace our way a little. It was mentioned that upon first breaking ground in the whale’s back, the blubber hook was inserted into the original hole there cut by the spades of the mates. But how did so clumsy and weighty a mass as that same hook get fixed in that hole? It was inserted there by my particular friend Queequeg, whose duty it was, as harpooneer, to descend upon the monster’s back for the special purpose referred to. But in very many cases, circumstances require that the harpooneer shall remain on the whale till the whole flensing or stripping operation is concluded. The whale, be it observed, lies almost entirely submerged, excepting the immediate parts operated upon. So down there, some ten feet below the level of the deck, the poor harpooneer flounders about, half on the whale and half in the water, as the vast mass revolves like a treadmill beneath him. On the occasion in question, Queequeg figured in the Highland costume—a shirt and socks—in which to my eyes, at least, he appeared to uncommon advantage; and no one had a better chance to observe him, as will presently be seen.

Being the savage’s bowsman, that is, the person who pulled the bow oar in his boat (the second one from forward), it was my cheerful duty to attend upon him while taking that hard-scrabble scramble upon the dead whale’s back. You have seen Italian organ boys holding a dancing ape by a long cord. Just so, from the ship’s steep side, did I hold Queequeg down there in the sea, by what is technically called in the fishery a monkey rope, attached to a strong strip of canvas belted round his waist.

It was a humorously perilous business for both of us. For, before we proceed further, it must be said that the monkey rope was fast at both ends; fast to Queequeg’s broad canvas belt, and fast to my narrow leather one. So that for better or for worse, we two, for the time, were wedded; and should poor Queequeg sink to rise no more, then both usage and honor demanded that instead of cutting the cord, it should drag me down in his wake. So, then, an elongated Siamese ligature united us. Queequeg was my own inseparable twin brother, nor could I any way get rid of the dangerous liabilities which the hempen bond entailed.

So strongly and metaphysically did I conceive of my situation then, that while earnestly watching his motions, I seemed distinctly to perceive that my own individuality was now merged in a joint-stock company of two: that my free will had received a mortal wound and that another’s mistake or misfortune might plunge innocent me into unmerited disaster and death. Therefore, I saw that here was a sort of interregnum in Providence, for its evenhanded equity never could have sanctioned so gross an injustice. And yet still further pondering—while I jerked him now and then from between the whale and the ship, which would threaten to jam him—still further pondering, I say, I saw that this situation of mine was the precise situation of every mortal that breathes; only, in most cases, he, one way or other, has this Siamese connection with a plurality of other mortals. If your banker breaks, you snap; if your apothecary by mistake sends you poison in your pills, you die. True, you may say that, by exceeding caution, you may possibly escape these and the multitudinous other evil chances of life. But handle Queequeg’s monkey rope heedfully as I would, sometimes he jerked it so, that I came very near sliding overboard. Nor could I possibly forget that, do what I would, I only had the management of one end of it.

I have hinted that I would often jerk poor Queequeg from between the whale and the ship—where he would occasionally fall, from the incessant rolling and swaying of both. But this was not the only jamming jeopardy he was exposed to. Unappalled by the massacre made upon them during the night, the sharks now freshly and more keenly allured by the before-pent blood which began to flow from the carcass—the rabid creatures swarmed round it like bees in a beehive. 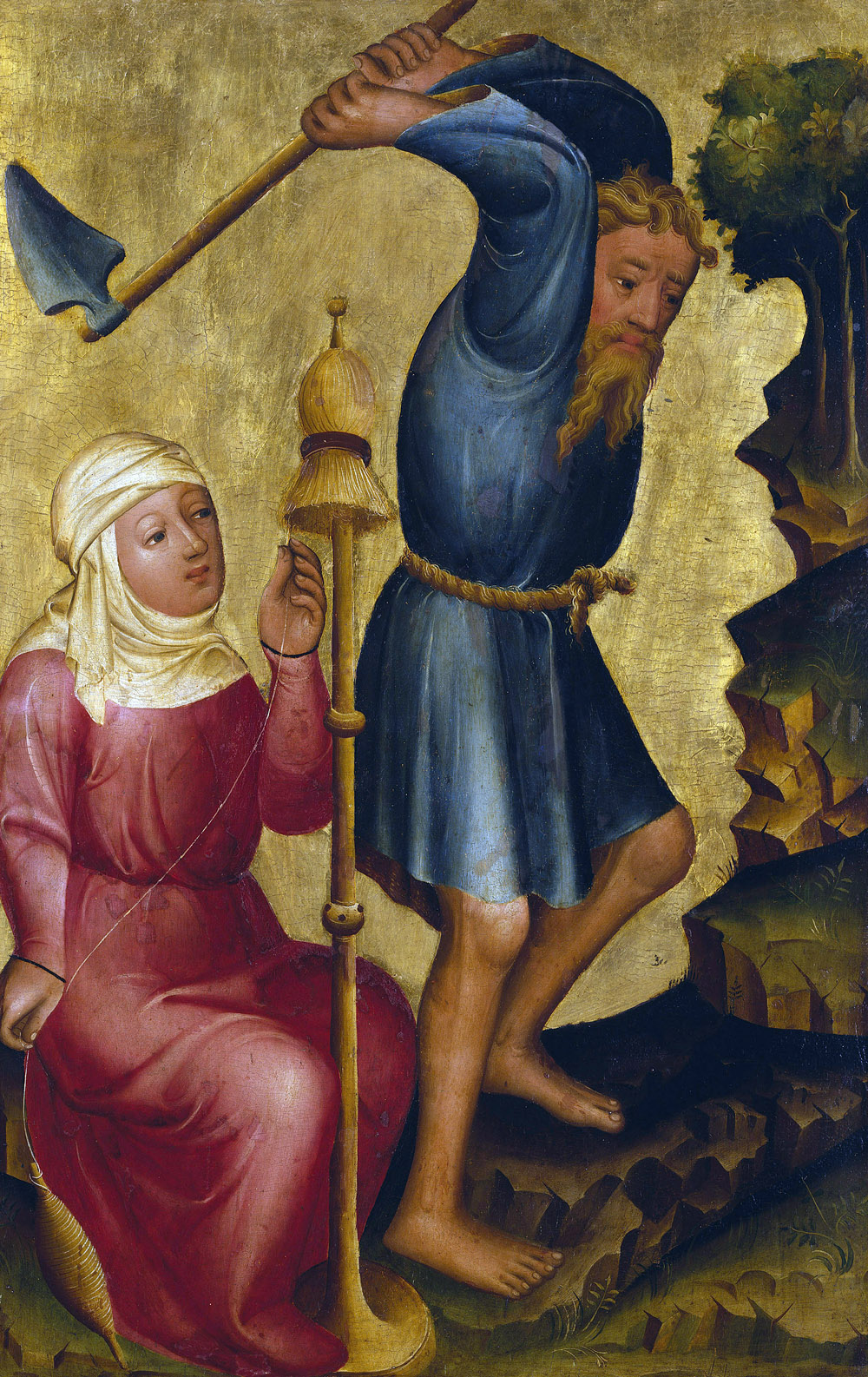 The labors of Adam and Eve, from the Grabow Altarpiece, by Master Bertram of Minden, c. 1381. Kunsthalle Hamburg, Germany.

And right in among those sharks was Queequeg, who often pushed them aside with his floundering feet. A thing altogether incredible were it not that attracted by such prey as a dead whale, the otherwise miscellaneously carnivorous shark will seldom touch a man.

Nevertheless, it may well be believed that since they have such a ravenous finger in the pie, it is deemed but wise to look sharp to them. Accordingly, besides the monkey rope, with which I now and then jerked the poor fellow from too close a vicinity to the maw of what seemed a peculiarly ferocious shark—he was provided with still another protection. Suspended over the side in one of the stages, Tashtego and Daggoo continually flourished over his head a couple of keen whale-spades, wherewith they slaughtered as many sharks as they could reach. This procedure of theirs, to be sure, was very disinterested and benevolent of them. They meant Queequeg’s best happiness, I admit, but in their hasty zeal to befriend him, and from the circumstance that both he and the sharks were at times half hidden by the blood-mudded water, those indiscreet spades of theirs would come nearer amputating a leg than a tail. But poor Queequeg, I suppose, straining and gasping there with that great iron hook—poor Queequeg, I suppose, only prayed to his Yojo, and gave up his life into the hands of his gods.

Well, well, my dear comrade and twin brother, thought I, as I drew in and then slacked off the rope to every swell of the sea—what matters it, after all? Are you not the precious image of each and all of us men in this whaling world? That unsounded ocean you gasp in is life; those sharks, your foes; those spades, your friends; and what between sharks and spades you are in a sad pickle and peril, poor lad.

From Moby-Dick. After writing two successful adventure novels, Typee and Omoo, Melville published Mardi in 1849. The critics deemed the book incomprehensible, and he turned to reading Shakespeare with “eyes which are as tender as young sparrows.” Melville died destitute in 1891 at the age of seventy-two. One of the few obituaries noted that “Even his own generation has long thought him dead.”