Lawrence B. Glick: Why did you decide to move out of the city of St. Louis?

Larman Williams: Why, a number of reasons. I guess mainly where we were, we were dissatisfied with the facilities, we were dissatisfied with the clientele in and around the block. There was high crime in the area, in the neighborhood and on the block, there were attacks on neighbors. One lady across the street was hit on the head with a hatchet, robbed, murdered. Down the street from me on the left, a lady was raped and was found the next morning in the nude. And people were prostituting all around and under us and in the apartment, that kind of stuff. My child was chased from school through an alley by someone, some man who was trying to seduce her. And for all of those reasons, I just was afraid to come home to find my family maybe dead or my child raped, or just afraid.

Mr. Glick: Why did you decide to move to the city of Ferguson? What led you to Ferguson?

Mr. Williams: Well, first of all, I had some knowledge of the community. I’d lived close by there, in Kinloch, which was an all-black community, and used to drift over to Ferguson and look at those lovely houses over there, and when they were all segregated, and just wondering—generally I wanted to find a home, and I wanted to locate in an area where I could get the best facilities for the amount of money that we were paying and fire service and police protection, where the crime rate was low, like any other citizen would want.

Mr. Glick: How long have you now lived in Ferguson?

Mr. Glick: Did you encounter any difficulty in making the purchase of your home?

Mr. Williams: I most certainly did.

Mr. Glick: Would you describe it for us, please?

Mr. Williams: Yes. After looking around, I guess we looked around for a year or so, and my pastor, who incidentally was a white fellow, found out that we were looking for a place, and he lived over in this area, and he saw two or three places for sale and asked me if I would like to live in Ferguson.

We had looked around University City and in Florissant and some other communities and the housing for the price and the size of them, we didn’t like it as well as we did this one when we finally got to see it. And he took us by this particular house over on Buckeye and we looked at it, just passing. We didn’t get a chance to go in at the time, and we saw it and we thought we would like to get inside and see it.

And we took the name off of the sign and called the real estate people, and of course they didn’t call us back at that time. About three or four days or so we still hadn’t heard from them, and my pastor called me again and asked me had I gotten any information on the house. And I told him I left my name there several times and we had called but the real estate people wouldn’t call us back. So he asked me if I would mind if he would look into it and get the price of the house and all of the details that we would want to know, and I told him I wouldn’t, and he got this information. And I said, “Well, that sounds good, I think we can handle that price and that kind of a thing.”

So he went to the owner of the home and told him that he knew of a person that wanted to buy the house and would they consider selling to me. And the owner said that he didn’t mind but his neighbors were not in the mood for selling to black people and—so, it didn’t drop there. 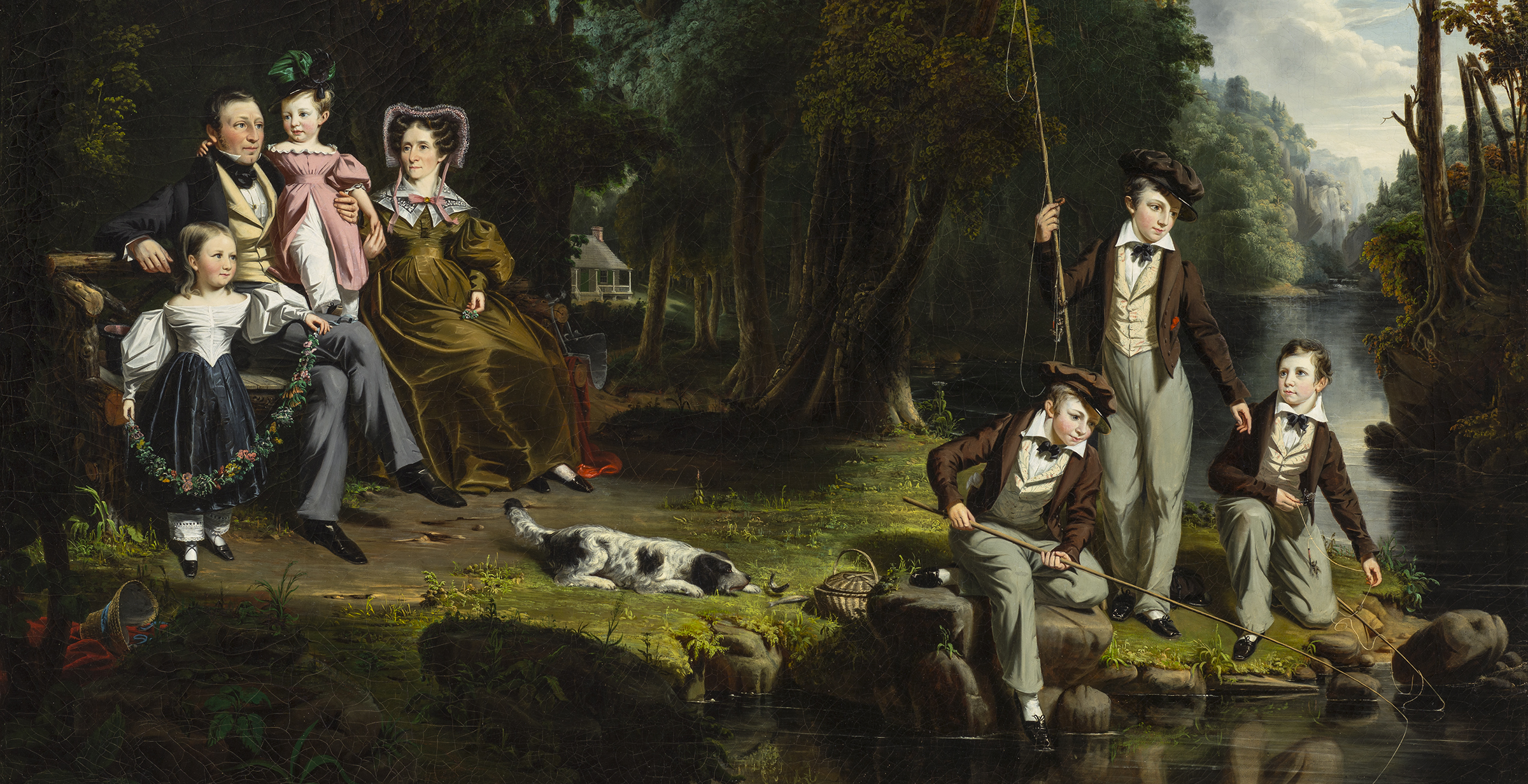 Alexander Masterton and His Wife and Children, by William Hamilton, 1834. © The Los Angeles County Museum of Art.

My pastor went and knocked on their doors, and he got them together and they had a caucus and a prayer meeting and decided that it was only the right thing to do, to sell to a black person. And then the person, the owner, called the real estate people, and they came and got in contact with me, and we made the transaction from there.

Mr. Glick: How long did it take you before the whole transaction was finally completed?

Mr. Williams: I would imagine it was about six months.

Mr. Glick: It took some special doing, it wasn’t just your wanting to buy a house and buying it?

Commissioner Maurice B. Mitchell: What would you think would be the likelihood of someone else on your block selling to a black family?

Mr. Williams: It’s pretty tight, and the people in that area have a general understanding with each other that they don’t want to do it to each other. By that I mean to sell to another black. They also—this has been related to me by whites in that area that I’ve gotten acquainted with—when I moved there, one white fellow that was very skeptical of me and my family didn’t want to have anything to do with us, and he watched us and he observed us and he found out—this particular neighbor as he watched us and observed us, and later he saw me outside in the yard, and he came over and invited me over to his home and we got to talking.

And we went on talking, and he got to telling me about how the people were talked to each other in that area and they didn’t want two blacks moving in together, side by side, that kind of stuff.

I patted him on his back and told him I understood.

From testimony before the U.S. Commission on Civil Rights. During a hearing focused on race and suburban development, Williams, an assistant high school principal, was called to testify with his wife, a teacher, and Adel Allen, an engineer who lived in Kirkwood. Allen recounted how some of his white neighbors “told us that they welcome black people” and “that they are glad that we came and all that. But the next day we saw the signs going up ‘For Sale’ all around us.” He continued: “The only people who are left are the ones who are too poor to leave.”