The East is full of secrets—no one understands their value better than the Oriental; and because she is full of secrets she is full of entrancing surprises. Many fine things there are upon the surface: brilliance of color, splendor of light, solemn loneliness, clamorous activity; these are only the patterns upon the curtain which floats forever before the recesses of Eastern life; its essential charm is of more subtle quality.

As it listeth, it comes and goes; it flashes upon you through the open doorway of some blank, windowless house you pass in the street, from under the lifted veil of the beggar woman who lays her hand on your bridle, from the dark, contemptuous eyes of a child; then the East sweeps aside her curtains, flashes a facet of her jewels into your dazzled eyes, and disappears again with a mocking little laugh at your bewilderment; then for a moment it seems to you that you are looking her in the face, but while you are wondering whether she be angel or devil, she is gone.

She will not stay—she prefers the unexpected; she will keep her secrets and her tantalizing charm with them, and when you think you have caught at last some of her illusive grace, she will send you back to shrouded figures and blank housefronts.

You must be content to wait, and perhaps someday, when you find her walking in her gardens in the cool of the evening, she will take a whim to stop and speak to you and you will go away fascinated by her courteous words and her exquisite hospitality.

For it is in her gardens that she is most herself—they share her charm, they are as unexpected as she. Conceive on every side such a landscape as the dead world will exhibit when it whirls naked and deserted through the starry interspace—a gray and featureless plain, over which the dust clouds rise and fall, build themselves into mighty columns, and sink back again among the stones at the bidding of hot and fitful winds; prickly low-growing plants for all vegetation, leafless, with a foliage of thorns; white patches of salt, on which the sunlight glitters; a fringe of barren mountains on the horizon…Yet in this desolation lurks the mocking beauty of the East. A little water and the desert breaks into flower, bowers of cool shade spring up in the midst of dust and glare, radiant stretches of soft color gleam in that gray expanse. Your heart leaps as you pass through the gateway in the mud wall; so sharp is the contrast, that you may stand with one foot in an arid wilderness and the other in a shadowy, flowery paradise. Under the broad, thick leaves of the plane trees tiny streams murmur, fountains splash with a sweet, fresh sound, white rose bushes drop their fragrant petals into tanks, lying deep and still like patches of concentrated shadow. The indescribable charm of a Persian garden is keenly present to the Persians themselves—the “strip of herbage strown, which just divides the desert from the sown,” an endlessly beautiful parable. Their poets sing the praise of gardens in exquisite verses, and call their books by their names. I fear the muses have wandered more often in Sa’di’s Garden of Roses than in the somewhat pretentious pleasure ground which our Elizabethan writer prepared for them.

The desert about Tehran is renowned for the beauty of its gardens. The shah possesses several, others belong to his sons, others to powerful ministers and wealthy merchants. Sometimes across the gateways a chain is drawn, denoting that the garden is bast—sanctuary—and into these the European may not go; but places of refuge for the hunted criminal are, fortunately, few, and generally the garden is open to all comers.

Once in a garden we found the owner at home. It was early in the morning; he was standing on his doorstep, judging between the differences of two people of his village, a man and a veiled woman, who had come to seek his arbitration. They were both talking loudly, she with shrill exclamations and calls upon God to witness, in her eagerness forgetting the laws of modesty, and throwing aside her thick linen veil, that she might plead with eyes and expression, as well as voice—or perhaps it was policy, for she had a beautiful face, dark-eyed and pale, around which the folds of black cloak and white linen fell like the drapery around the head of a Madonna. When our unknown host saw us, he dismissed his clamorous petitioners, and greeted us with the courtesy which is the heirloom of the Persian race. Seats were brought for us, tea and coffee served to us, a blue cotton-clothed multitude of gardeners offered us baskets of unripe plums, dishes of lettuce, and bunches of stiffly-arranged flowers. We sat and conversed, with no undue animation, here and there an occasional remark, but the intervals were rendered sociable by the bubbling of kalyans. At length we rose to go, and as we walked down the garden paths many compliments passed between us and our host. At the gate he assured us that our slave had been honored by our acceptance of his hospitality, and with low bows we mounted our horses and rode away.

We had not in reality trenched upon his privacy. There was, indeed, a part of his domains where even his hospitality would not have bidden us enter. Behind the house in which we were received lay the women’s dwelling, a long, low, verandaed building standing around a deep tank, on whose edge solemn children carry on their dignified games, and veiled women flit backward and forward. Shaded by trees somewhat desolate and uncared-for in appearance, washed up at the further end of the garden beyond the reach of flowers, the sight of the andarun and of its inhabitants knocks at the heart with a weary sense of discontent, of purposeless, vapid lives—a wailing, endless minor.

So in the wilderness, between high walls, the secret, mysterious life of the East flows on—a life into which no European can penetrate, whose standards, whose canons, are so different from his own that the whole existence they rule seems to him misty and unreal, incomprehensible, at any rate unfathomable; a life so monotonous, so unvaried from age to age that it does not present any feature marked enough to create an impression other than that of vague picturesqueness, of dullness inexpressible, of repose which has turned to lethargy, and tranquility carried beyond the point of virtue.

And these gardens, also with their tall trees and peaceful tanks, are subject to the unexpected vicissitudes of Eastern fortune. The minister falls into disgrace, the rich merchant is ruined by the exactions of his sovereign; the stream is turned off, the water ceases to flow into the tanks and to leap in the fountains, the trees die, the flowers wither, the walls crumble into unheeded decay, and in a few years the tiny paradise has been swept forgotten from the face of the earth, and the conquering desert spreads its dust and ashes once more over it all.

From Persian Pictures. After her uncle was appointed the British minister in Tehran in 1891, Bell took up the study of Persian and accompanied her aunt the following year on a trip to the East, where she wrote a series of letters that served as the basis for this book, published in 1894. She climbed the Matterhorn in 1904, documented Byzantine churches in Turkey in 1906, studied the palace of Ukhaidir on the Euphrates in 1911, and was serving as Britain’s oriental secretary in Iraq during the nation’s creation after World War I. She died from an overdose of sleeping pills in Baghdad in 1926. 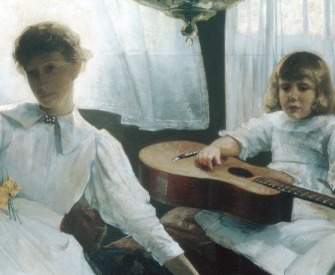 The Art of Walking