“Robert,” his mother said, “Nurse Mary is going to tell you that there are no black men who creep into little boys’ rooms in the dark and carry them off when they are naughty.

“Being naughty brings its own punishment, but it is not of that kind. There are no big cats who catch little boys who cry. I am sorry that you were naughty and fretful when I was sick, so that Nurse Mary had to tell you stories to make you be good, but I want you to realize that nothing can come into our house to harm our little son, and it is just as safe here at night as it is in the daytime. I want you to listen while Nurse Mary tells you this, for she is going away today, and you will probably never see her again.”

The nurse was crying, but she obeyed the mother’s order. The little boy stood within the shelter of his mother’s arms and listened gravely while the nurse went back over all of the tales that she had told him, saying with each one, “It is not true.” At the close the little man held out his hand. “Thank you, nurse,” he said. “I ought not to have been afraid, but I believe you, you know.” Then, looking into his mother’s unsmiling face, he said, “I shall not be afraid, now, mother.”

From The Child Welfare Manual. Published amid widespread early twentieth-century concern about whether emotional distress could hinder childhood development, this manual also includes a passage on the “Ill Effects of an Overelaborate Christmas Surprise.” A mother relates that a holiday party was “too much for our delicately organized boy.” Her son develops a nervous condition whose “most pronounced feature found expression in a sense of fear—fear of something indefinite, yet awful fear!” 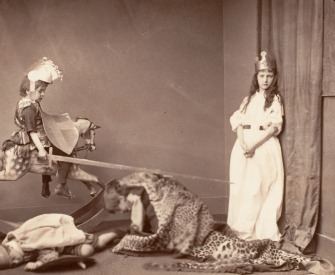 A paean to the strange suburbs of Baltimore. More

Sigmund Freud on thumbsucking as the road to darker pleasures.More