It pleased God, contrary to all expectation, that about four or five of the clock in the afternoon the wind fell, and as in an instant the fire decreased, having burned all on the Thames side to the new buildings of the Inner Temple next to Whitefriars. And it ceased in all other parts of the town near the same time, so that the greatest care then was to keep good guards to watch the fire that was upon the ground, that it might not break out again.

And this was the better performed, because they who had yet their houses standing had not the courage to sleep, but watched with much less distraction, though the same distemper still remained in the utmost extent “that all this had fallen out by the conspiracy of the French and Dutch with the papists.” And all gaols were filled with those who were every hour apprehended upon that jealousy, or rather upon some evidence that they were guilty of the crime. And the people were so sottish that they believed that all the French in the town, which no doubt were a very great number, were drawn into a body to prosecute those by the sword who were preserved from the fire. And the inhabitants of a whole street have ran in a great tumult one way upon the rumor that the French were marching at the other end of it, so terrified men were with their own apprehensions.

Is all our fire of shipwreck wood?

When the night, though far from being a quiet one, had somewhat lessened the consternation, the first care the king took was that the country might speedily supply markets in all places, that they who had saved themselves from burning might not be in danger of starving. And if there had not been extraordinary care and diligence used, many would have perished that way. The vast destruction of corn and all other sorts of provisions in those parts where the fire had prevailed had not only left all that people destitute of all that was to be eat or drunk, but the bakers and brewers, which inhabited the other parts which were unhurt, had forsaken their houses and carried away all that was portable, insomuch as many days passed before they were enough in their wits and in their houses to fall to their occupations. And those parts of the town which God had spared and preserved were many hours without anything to eat, as well as they who were in the fields. And yet it can hardly be conceived how great a supply of all kinds was brought from all places within four and twenty hours. And which was more miraculous, in four days, in all the fields about the town, which had seemed covered with those whose habitations were burned, and with the goods which they had saved, there was scarce a man to be seen. All found shelter in so short a time, either in those parts which remained of the city and in the suburbs or in the neighbor villages; all kind of people expressing a marvelous charity toward those who appeared to be undone.

The king was not more troubled at any particular than at the imagination which possessed the hearts of so many, that all this mischief had fallen out by a real and formed conspiracy, which, albeit he saw no color to believe, he found very many intelligent men, and even some of his own council, who did really believe it. Whereupon he appointed the privy council to sit both morning and evening to examine all evidence of that kind that should be brought before them. Many witnesses who were produced as if their testimony would remove all doubts made such senseless relations of what they had been told, without knowing the condition of the persons who told them or where to find them, that it was a hard matter to forbear smiling at their evidence. Some Frenchmen’s houses had been searched in which had been found many of those shells for squibs and other fireworks frequently used in nights of joy and triumph. The men were well known, and had lived many years there by that trade, and had no other. Yet these men were looked upon as in the number of the conspirators and remained still in prison till their neighbors solicited for their liberty. And it cannot be enough wondered at that in this general rage of the people no mischief was done to the strangers, that no one of them was assassinated outright, though many were sorely beaten and bruised. 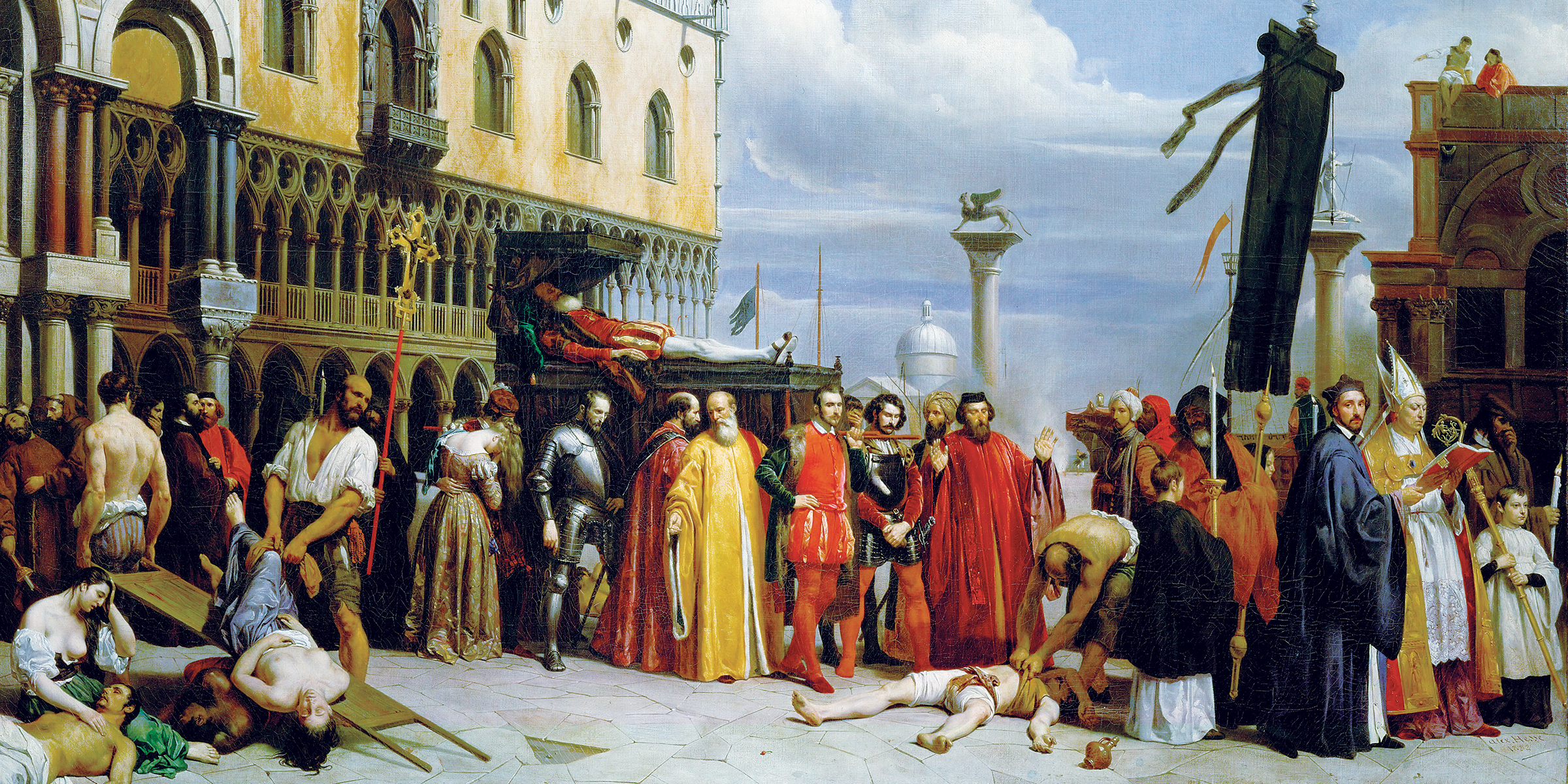 Funeral Honors Rendered to Titian After His Death at Venice During the Plague of 1576 (detail), by Alexandre Hesse, 1833. Musée du Louvre. © Erich Lessing / Art Resource, NY.

The value or estimate of what that devouring fire consumed, over and above the houses, could never be computed in any degree. For besides that the first night, which in a moment swept away the vast wealth of Thames Street, there was not anything that could be preserved in respect of the suddenness and amazement, all people being in their beds till the fire was in their houses, and so could save nothing but themselves. Nor did many believe that the fire was near them, or that they had reason to remove their goods, till it was upon them and rendered it impossible. Then it fell out at a season in the year, the beginning of September, when very many of the substantial citizens and other wealthy men were in the country, whereof many had not left a servant in their houses, thinking themselves upon all ordinary accidents more secure in the goodness and kindness of their neighbors than they could be in the fidelity of a servant. And whatsoever was in such houses was entirely consumed by the fire or lost as to the owners. And of this class of absent men, there was scarce one to whom those lodgings appertained who was in town, so that whatsoever was there, their money, books, and papers, besides the evidences of many men’s estates deposited in their hands, were all burned or lost to a very great value. But of particular men’s losses could never be made any computation.

It was an incredible damage that was and might rationally be computed to be sustained by one small company, the company of stationers, in books, paper, and the other lesser commodities which are vendible in that corporation, which amounted to no less than 200,000 pounds. All those who dwelled near St. Paul’s carried their goods, books, paper, and the like into the large vaults which were under the church before the fire came thither; which vaults, though all the church above the ground was afterward burned, with all the houses round about, still stood firm and supported the foundation and preserved all that was within them. The impatience of those who had lost their houses and whatsoever they had else in the fire made them very desirous to see what they had saved, upon which all their hopes were founded to repair the rest.

It was the fourth day after the fire ceased to flame, though it still burned in the ruins, from whence there was still an intolerable heat, when the booksellers came to behold all their wealth, which to that moment was safe. But the doors were no sooner opened and the air from without fanned the strong heat within, but first the driest and most combustible matters broke into a flame, which consumed all of what kind soever that till then had been unhurt there.

All men that are ruined, are ruined on the side of their natural propensities.

If so vast a damage as 200,000 pounds befell that little company of stationers in books and paper and the like, what shall we conceive was lost in cloth, in silks of all kinds, in linen, and those richer manufactures? Not to speak of money, plate, and jewels, whereof some were recovered out of the ruins of those houses which the owners took care to watch, as containing somewhat that was worth the looking for, and in which deluge there were men ready enough to fish.

From his Life. Hyde became lord chancellor to Charles II after the Restoration, but was dismissed from his chancellorship in August 1667. Three months later he was forced to flee to France. He wrote his Life and completed his History of the Rebellion while in exile. A month after his death in Rouen in 1674, he was buried in Westminster Abbey. “Clarendon,” said journalist and critic Murray Kempton, “was always on the losing side, but he was a towering spirit.”

Rules of the Road