Mack Sennett was away on location with Mabel Normand as well as the Ford Sterling Company, so there was hardly anyone left in the studio. Mr. Henry Lehrman, Keystone’s top director after Sennett, was to start a new picture and wanted me to play a newspaper reporter. Lehrman was a vain man and very conscious of the fact that he had made some successful comedies of a mechanical nature; he used to say that he didn’t need personalities, that he got all his laughs from mechanical effects and film cutting.

We had no story. It was to be a documentary about the printing press done with a few comedy touches. I wore a light frock coat, a top hat, and a handlebar mustache. When we started, I could see that Lehrman was groping for ideas. And of course, being a newcomer at Keystone, I was anxious to make suggestions. This was where I created antagonism with Lehrman. In a scene in which I had an interview with an editor of a newspaper, I crammed in every conceivable gag I could think of, even suggesting business for others in the cast. Although the picture was completed in three days, I thought we contrived some very funny gags. But when I saw the finished film, it broke my heart, for the cutter had butchered it beyond recognition, cutting into the middle of all my funny business. I was bewildered and wondered why they had done this. Henry Lehrman confessed years later that he had deliberately done it, because, as he put it, he thought I knew too much.

The day after I finished with Lehrman, Sennett returned from location. Ford Sterling was on one set, Roscoe Arbuckle on another; the whole stage was crowded with three companies at work. I was in my street clothes and had nothing to do, so I stood where Sennett could see me. He was standing with Mabel, looking into a hotel lobby set, biting the end of a cigar. “We need some gags here,” he said, then turned to me. “Put on comedy makeup. Anything will do.”

I had no idea what makeup to put on. I did not like my getup as the press reporter. However, on the way to the wardrobe, I thought I would dress in baggy pants, big shoes, a cane, and a derby hat. I wanted everything a contradiction: the pants baggy, the coat tight; the hat small, and the shoes large. I was undecided whether to look old or young, but remembering Sennett had expected me to be a much older man, I added a small mustache, which, I reasoned, would add age without hiding my expression.

I had no idea of the character. But the moment I was dressed, the clothes and the makeup made me feel the person he was. I began to know him, and by the time I walked on to the stage he was fully born. When I confronted Sennett, I assumed the character and strutted about, swinging my cane and parading before him. Gags and comedy ideas went racing through my mind.

The secret of Mack Sennett’s success was his enthusiasm. He was a great audience and laughed genuinely at what he thought funny. He stood and giggled until his body began to shake. This encouraged me and I began to explain the character: “You know this fellow is many sided, a tramp, a gentleman, a poet, a dreamer, a lonely fellow, always hopeful of romance and adventure. He would have you believe he is a scientist, a musician, a duke, a polo player. However, he is not above picking up cigarette butts or robbing a baby of its candy. And, of course, if the occasion warrants it, he will kick a lady in the rear—but only in extreme anger!”

I carried on this way for ten minutes or more, keeping Sennett in continuous chuckles. “All right,” he said, “get on the set and see what you can do there.” As with the Lehrman film, I knew little of what the story was about, other than that Mabel Normand gets involved with her husband and a lover.

In all comedy business, an attitude is most important, but it is not always easy to find an attitude. However, in the hotel lobby I felt I was an imposter posing as one of the guests, but in reality I was a tramp just wanting a little shelter. I entered and stumbled over the foot of a lady. I turned and raised my hat apologetically, then turned and stumbled over a cuspidor, then turned and raised my hat to the cuspidor. Behind the camera they began to laugh.

Quite a crowd had gathered there, not only the players of the other companies who left their sets to watch us, but also the stagehands, the carpenters, and the wardrobe department. That indeed was a compliment. And by the time we had finished rehearsing we had quite a large audience laughing. Very soon I saw Ford Sterling peering over the shoulders of others.

When it was over, I knew I had made good. At the end of the day, when I went to the dressing room, Ford Sterling and Roscoe Arbuckle were taking off their makeup. Very little was said, but the atmosphere was charged with crosscurrents. Both Ford and Roscoe liked me, but I frankly felt they were undergoing some inner conflict. 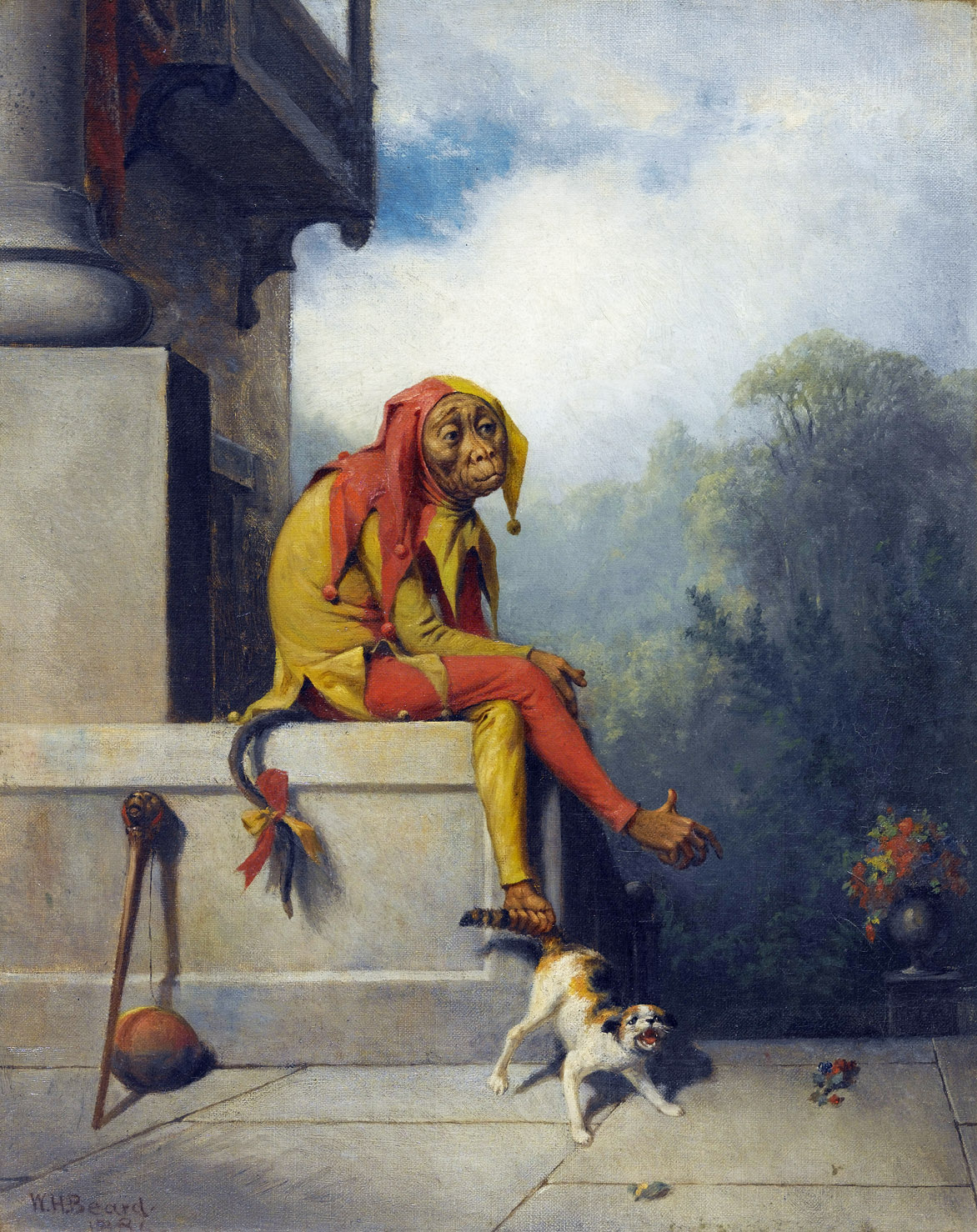 For What Was I Created?, by William Holbrook Beard, 1886. Brooklyn Museum, gift of Florence Logan.

It was a long scene that ran seventy-five feet. Later Mr. Sennett and Mr. Lehrman debated whether to let it run its full length, as the average comedy scene rarely ran over ten. “If it’s funny,” I said, “does length really matter?” They decided to let the scene run its full seventy-five feet. As the clothes had imbued me with the character, I then and there decided I would keep to this costume whatever happened.

That evening I went home on the streetcar with one of the small-bit players. Said he, “Boy, you’ve started something; nobody ever got those kind of laughs on the set before, not even Ford Sterling—and you should have seen his face watching you, it was a study!”

“Let’s hope they’ll laugh the same way in the theater,” I said, by way of suppressing my elation.

From My Autobiography. Chaplin began this book’s first chapter, “I was born on April 16, 1889, at eight o’clock at night, in East Lane, Walworth,” and the childhood he then recounted was no less Dickensian, replete with Victorian workhouses, reversals of fortune, and a drunken father. Chaplin directed his first silent film in 1914 and his last one, Modern Times, in 1936—the last silent film to be produced for forty years. His first talkie, The Great Dictator, was released in 1940. It parodied Adolf Hitler, who had been born four days after Chaplin in 1889.