I am inclined to believe that the ice found in Iceland is a penalty the land suffers for lying so close to Greenland, for it is to be expected that severe cold would come from there, since Greenland is ice-clad beyond all other lands. Now since Iceland gets so much cold from that side and receives little heat from the sun, it has an overabundance of ice on the mountain ridges.

Concerning the extraordinary fires that burn there, I hardly know what to say, for they possess a strange nature. No rock or stone is so hard that this fire will not melt it like wax and then burn it like fat oil. But when a tree is cast into the fire, it will not burn, only scorch. Now since this fire only feeds on dead things and rejects everything that other fires devour, it must surely be said that it is a dead fire. And it seems most likely that it is the fire of hell, for in hell all things are dead.

I am also disposed to believe that certain bodies of water in Iceland must be of the same dead nature. For there are springs that boil furiously all the time, both winter and summer. At times the boiling is so violent that the heated water is thrown high into the air. But whatever is laid near the spring at the time of spouting, whether it be cloth or wood or anything else that the water may touch when it falls down again, will turn to stone. But if the fire should not be dead but have its origin in some peculiarity of the country, the most reasonable theory as to the formation of the land seems to be that there must be many veins, empty passages, and wide cavities in its foundations. At times it may happen that these passages and cavities will be so completely packed with air, either by the winds or by the power of the roaring breakers, that the pressure of the blast cannot be confined, and this may be the origin of those great earthquakes that occur in that country. It may be that the great and powerful activity of the air within the foundations of the earth also causes those great fires to be lit and to appear, which burst forth in various parts of the land. 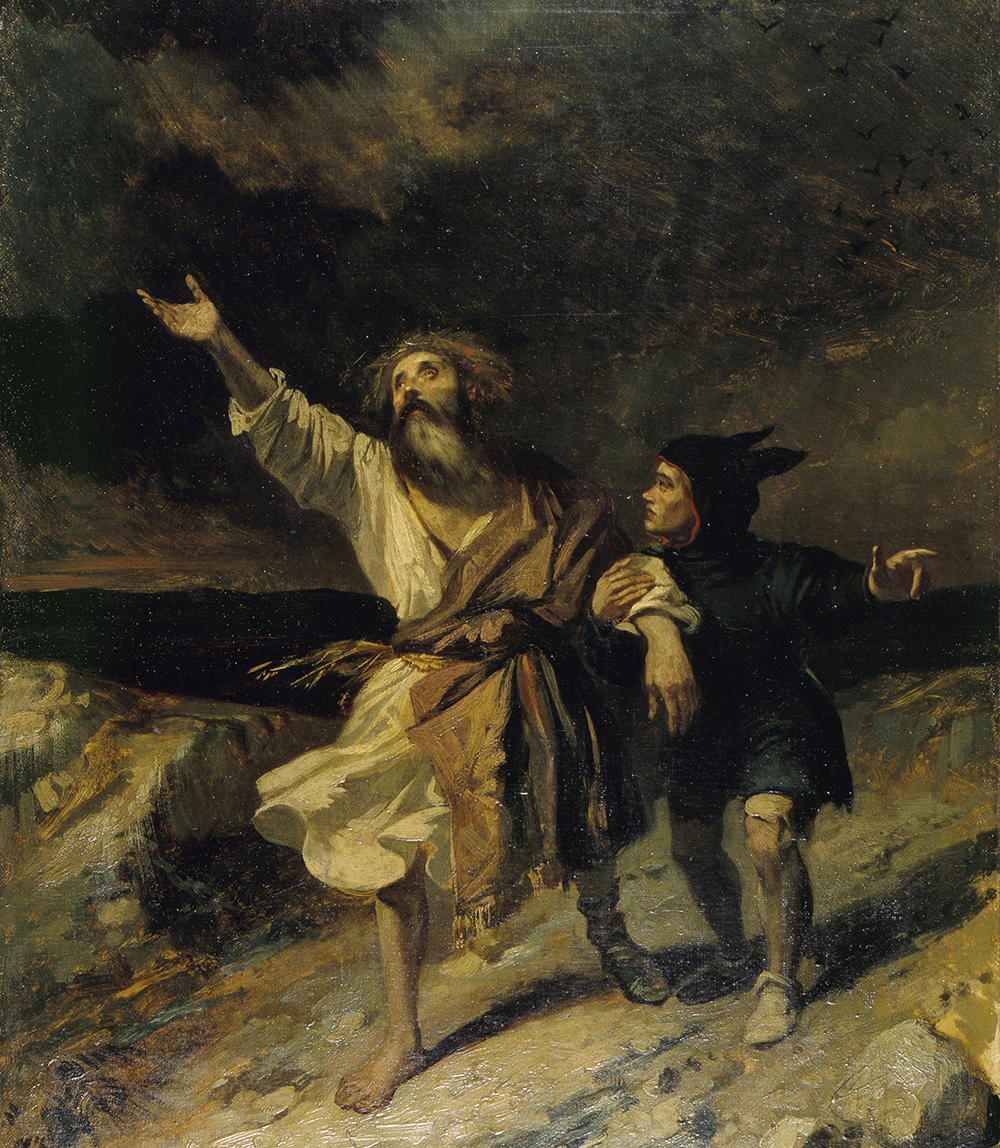 King Lear and the Fool in the Storm, by Louis Boulanger, 1836. © RMN-Grand Palais / Art Resource, NY.

I have no doubt that there are places of torment in Iceland even in places where there is no burning, for in that country the power of frost and ice is as boundless as that of fire. In addition to those springs of boiling water, there are also ice-cold streams that flow out of the glaciers with such violence that the earth and the neighboring mountains tremble. For when water flows with such a swift and furious current, mountains will shake because of its vast mass and overpowering strength. And no men can go out on those riverbanks to view them unless they bring long ropes to be tied around those who wish to explore, while farther away others sit holding fast the rope, so that they may be ready and able to pull them back if the turbulence of the current should make them dizzy.

It seems evident to me that wherever such great violence appears and in such terrible forms, there surely must be places of torment. And God has made such great and terrifying things manifest upon earth to man, not only that men may be the more vigilant and may reflect that these tortures are indeed heavy to think upon but even more to make them reflect that greater still are the things invisible, which they are not permitted to see. But these things are a testimony, that it is not untrue what we have been told, that those men who will not beware of evil deeds and unrighteousness while they live on earth may expect to suffer torment when they leave this world. For many a simpleminded man might think that all this was mere deception unworthy of notice and told merely to terrify if there were no such evidence. But now no one can deny what he sees before his own eyes, since we hear exactly the same things about the tortures of hell as those which one can see on the island called Iceland.

From the Konungs Skuggsjá. Composed in what is now Namdalen, Norway, during the thirteenth-century reign of Haakon IV, this didactic text takes the form of a dialogue between father and son. Along with descriptions of the “marvels” to be found in foreign lands, the work offers advice on seafaring, trade, and courtly etiquette. “You must keep constantly in mind, if you wish to be counted a wise man,” the father urges elsewhere in the text, “that you ought never to let a day pass without learning something.”