In all countries, as man is civilized and improved, the lower ranks of animals are depressed and degraded. Either reduced to servitude or treated as rebels, all their societies are dissolved, and all their united talents rendered ineffectual. Their feeble arts quickly disappear, and nothing remains but their solitary instincts or those foreign habitudes which they receive from human education.

The beaver seems to be now the only remaining monument of that kind of intelligence in brutes, which, though infinitely inferior, as to its principle, to that of man, supposes, however, certain common projects, certain relative ends in view, projects that, having in like manner society as their basis, suppose some particular method of understanding one another and of acting in concert.

It is allowed that the beaver, far from having an absolute superiority over the other animals, seems, on the contrary, to be inferior to some of them as to its qualities merely as an individual; and this fact is confirmed by observing a young beaver which was sent to Paris from Canada in the beginning of the year 1758. It is an animal tolerably mild, tranquil, and familiar, though rather, it would seem, gloomy and melancholy. If we consider this animal, therefore, in its dispersed and solitary state, we shall find that, as to internal qualities, it is not superior to other animals, that it has not more ingenuity than the dog, more sense than the elephant or more cunning than the fox. It is rather remarkable for the singularities of its internal qualities. Of quadrupeds, the beaver alone has a flat oval tail, covered with scales, which serves as a rudder to direct its motions in the water. It is the only quadruped that has membranes between the toes on the hind feet and at the same time none on the fore ones, which it uses as hands in carrying food to the mouth. It is the only one that, while it resembles a terrestrial animal in its fore parts, seems to approach the nature of an aquatic being in its hind ones.

The beavers begin to assemble in June or July in order to form a society which is to continue for the greatest part of the year. They arrive in numbers from every side, and presently form a company of two or three hundred. The place of meeting is commonly the place where they fix their abode, and this is always by the side of some lake or river. If it is a lake in which the waters are always upon a level, they dispense with building a dam, but if it is a running stream, which is subject to floods and falls, they then set about building a dam, or pier, that crosses the river so as to form a dead water in that part which lies above and below. This dam, or pier, is often fourscore or a hundred feet long, and ten or twelve feet thick at the base. If we compare the greatness of the work with the power of the architect, it will appear enormous, but the solidity with which it is built is still more astonishing than its size. The part of the river over which this dam is usually built is where it is most shallow and where some great tree is found growing by the side of the stream. This they pitch upon as proper for making the principal part in their building, and though it is often thicker than a man’s body, they yet instantly set about cutting it down. For this operation they have no other instrument but their four incisive teeth, which soon lay it level, and that also on the side they wish it to fall, which is always across the stream. They then set about cutting the top branches to make it lie close and even, and serve as the principal beam of their fabric. 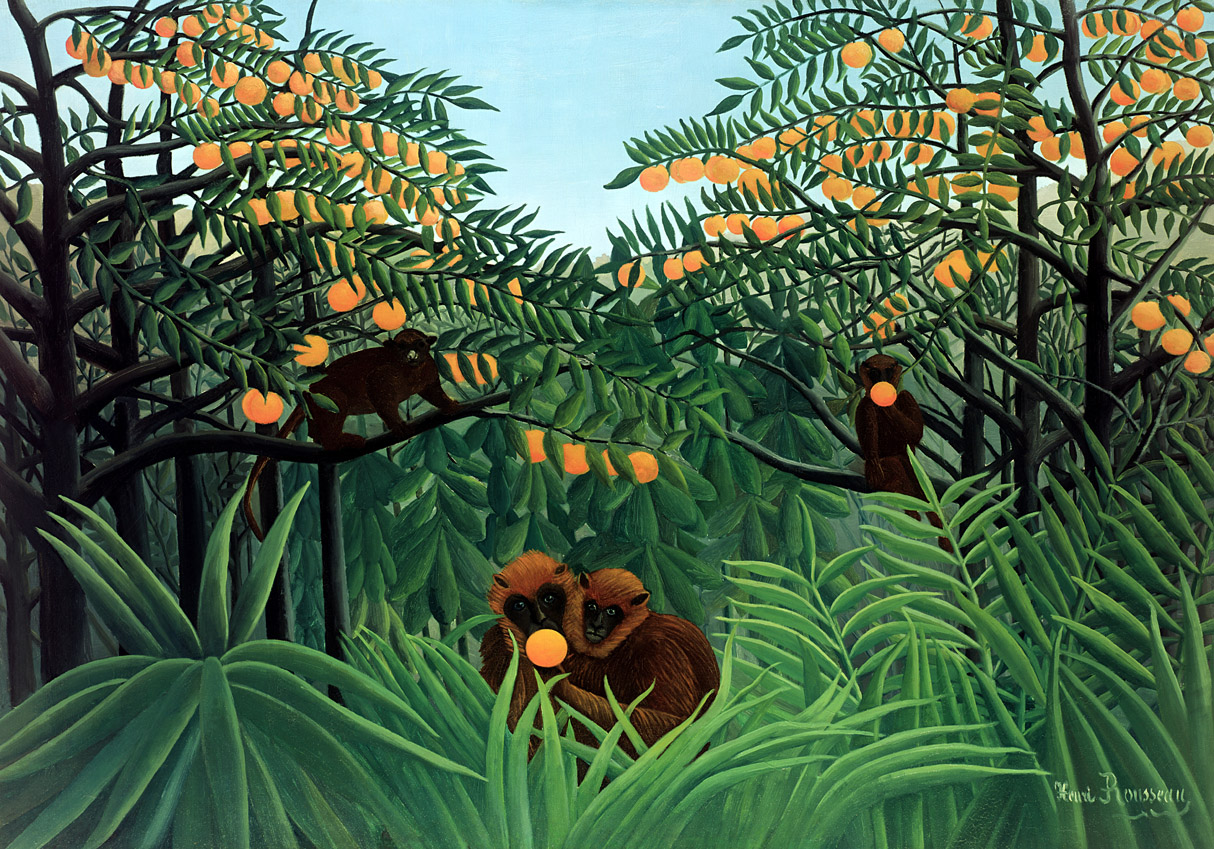 The Tropics, by Henri Rousseau, 1907. © The Bridgeman Art Library.

These operations are performed in common. At one time a number of beavers are employed together at the foot of the tree in gnawing it down, and when this part of their labor is accomplished, it becomes the business of others to sever the branches, while a third party are engaged along the borders of the river or lake in cutting other trees, which, though smaller than the first tree, are yet as thick as the leg, if not the thigh, of a common-sized man. These they carry with them by land to the brink of the river, and then by water to the place allotted for their building, where, sharpening them at one end and forming them into stakes, they fix them in the ground at a small distance from one another and fill up the vacant spaces with pliant branches. While some are thus employed in fixing the stakes, others go in search of clay, which they prepare for their purpose with their tails and their feet, and with which, brought home in large quantities, they render their structure still more compact.

This structure is so ingeniously contrived that it has not only all the extent and all the solidity that are requisite, but also a form that is the most proper for confining the water and, when it has passed its bounds, for maintaining its weight, or baffling its attacks. At the top of their dike or mole, that is, at the part where it is least thick, they form two or three openings. These they occasionally enlarge or contract as the river occasionally rises or falls.

After this display of their labors to accomplish a public work, it would be superfluous to add to it a description of their private constructions, were it not that, in history, an account should be given of every fact, and that, in this first grand work of the beaver, the intention uniformly is that the little habitation of each family should be rendered more commodious.

Man is the only animal that can remain on friendly terms with the victims he intends to eat until he eats them.

This habitation is always furnished with two passages; one for the purpose of a land and the other of a water excursion. In shape it is almost always either oval or round; sometimes it is from four to five feet in diameter, and sometimes it consists of two and even three stories, while the walls are always two feet thick. When it happens to consist of but one story, the walls are but a few feet high, over which there is a kind of vault that terminates the edifice and serves as a covering for it. It is constructed with such solidity as to be impenetrable to the heaviest rains, to defy the most impetuous winds, and is plastered with such neatness, both outwardly and inwardly, that one might actually suppose it to be the work of man. These animals, nevertheless, use no instrument for the preparation of their mortar but their feet, or for the application of it, but their tails. It is near their habitations that they establish their magazines, and to each hut or cabin there is one allotted, of a size proportioned to the number of its inhabitants, to which they all have a common right; nor do they offer to plunder their neighbors.

Hamlets, so to express them, have been seen, composed of twenty and even twenty-five dwellings. Such large settlements, however, are rare. In general, they do not contain more than ten or a dozen families, each of which has its own separate district, magazine, and habitation; nor will it allow any strangers to settle within its enclosure. The smallest dwellings contain two, four, and six; the largest, eighteen, twenty, and it is even said thirty beavers—and it seldom or never happens that the number of males and females is not upon a par. Moderately speaking, therefore, their society may be said to consist frequently of one hundred and fifty or two hundred workmen, who, having first exerted their united industry and diligence in rearing a grand public work, afterward form themselves into different bodies in order to construct private habitations.

However numerous the republic of beavers may be, peace and good order are uniformly maintained in it. A common series of toil has strengthened their union; the conveniences that they have procured for one another, and the abundance of provisions which, after having amassed, they continue to consume together, render them happy within themselves, and having moderate appetites, entertaining even an aversion to blood and carnage, they have not the smallest propensity to hostility or rapine, but actually enjoy all the blessings that man is only born to desire.

From Natural History. Buffon presented his paper on geometric probability, “Memoir on the Game of Franc-carreau,” to the Royal Academy of Sciences in 1733, became the keeper of the royal botanical garden in 1739, and in 1749 began publishing his Natural History, the first modern attempt to synthesize all that was known about natural history, geology, and anthropology in one work. At his estate in Montbard, he kept a menagerie and an aviary. Buffon died at the age of eighty in 1788.

An account of the English losses in the colonies.More